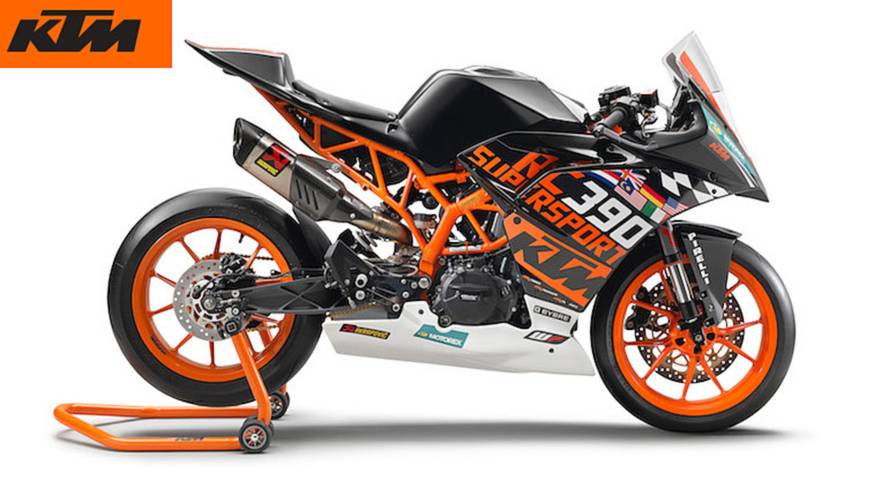 KTM's new RC 390 R and its associated, limited edition race kit are a shot over the 300cc race class' bow.

The Ready-To-Race brand has just revealed its SSP300-grade homologation racer.

KTM’s has developed quite a few championship-winning, small-displacement racers – such as the RC250R Moto3 machine – before introducing the popular RC 390. Since that bike's debut, the Ready-To-Race brand has further developed the machine through dozens of “RC Cups” around the world, races in which the RC 390 is the only machine on the grid, giving KTM ample real-world experience to draw from. Between the recent introduction of the SuperSport 300 class, and Kawasaki’s release of its new Ninja 400, it appears that KTM has once again raised the bar in an effort to stay on top of the small-displacement racing world. Behold, the new homologated RC 390 R with supplementary SuperSport 300 Race kit.

The new production run of the R-spec RC’s will be limited to just 500 units, with each machine coming from the factory equipped with a collection of hardware upgrades. These include fully adjustable WP suspension fore and aft, CNC machined foldable clutch and brake levers, a specially tuned power-plant, an all-new graphics kit, and new handlebars that allow for an even more aggressive riding position. The new RC 390 R carries an MSRP of $10,500 (or 8,500 euros).

In addition to the new bike itself, KTM is also releasing just 50 SSP300 kits to take the RC-R’s performance to the next level. The 390 R and the aforementioned kit are both race-legal in the SSP 300 FIM class. The limited edition kits consist of 230 individual parts designed to make the RC 390 R a bona fide SSP300 contender. Make no mistake, what KTM is offering here is a genuinely pro-level racer right out of the box.

The 50 kits each include full titanium Akrapovic SSP300EVO02 exhaust system, full race ECU, STM slipper clutch, quick-shifter, wiring harness, an extra set of wheels, an advanced FEBUR cooling system, full bodywork made from unspecified lightweight materials, and, of course, dozens and dozens of different gearing options. As one might expect, buying a pro-grade, out-of-the-box racer doesn’t come cheap, and each of the 50 race kits are going for a cool $13,675 (or 11,000 euros), and that’s on top of the bike’s five-figure price tag.

Unfortunately, the new kit is only compatible on the new R-spec 390 and can’t be fitted to older RC 390 models. This package definitely isn’t aimed at your everyday commuter or canyon carver, but if anyone is serious about high-level racing in the 300 class, this may be your golden ticket. Assuming you have a spare twenty grand laying around.