Reading glowing press reports from the launch in January and falling in love with the  F800GS in Labrador gave me some pretty high expectations for this new BMW F800R. Middleweight nakeds like this BMW or the Triumph Street Triple are some of my favorite motorcycles, combining comfort with light weight, good handling, an affordable price and just some simple, accessible fun. So it should have bee...

Reading glowing press reports from the launch in January and falling in love with the  F800GS in Labrador gave me some pretty high expectations for this new BMW F800R. Middleweight nakeds like this BMW or the Triumph Street Triple are some of my favorite motorcycles, combining comfort with light weight, good handling, an affordable price and just some simple, accessible fun. So it should have been perfect for spending a month in LA with, right? Well, let’s just say it spent most of the month in the back of the garage for a reason.

The engine’s pretty much the same, but there’s a new double-sided swingarm and chain final drive instead of a belt (according to the hype, it’s there so Chris Pfeiffer can swap in granny gears). That probably makes a bigger difference than it sounds like it does as it adds two inches to the wheelbase.

The F800S is actually discontinued in the US now, leaving this as the sportier version of the ST.

Pretty much, but the R is geared quite a bit lower and, at 439lbs (wet) weighs 16lbs less than the BMW F800GS (and a lot less than the luggaged-up bike I rode to Labrador), so it feels a fair bit stronger. The pay off is that, where the adventure touring bike is happy cruising at 90mph all day long, the naked starts vibing your hands to sleep above 80mph, where it crosses the 5,000rpm threshold in top gear.

The two bikes don’t actually feel that similar. It could be down to the different chassis (R uses an aluminum beam, GS a steel tube arrangement), but the R feels more compact, not just shorter. The riding positions are night and day, the GS is upright and spacious, the R is just cramped.

There are similarities though. I still forget to park on the left side of fuel pumps so the gas cap points towards the pump. The digital gauge still waits a long time before it starts ticking off gradations. But, on the R, it doesn’t wait all the way till half-tank before giving you any meaningful readings, more like 3/4.

Is it a naked sportbike?

Not really. The unadjustable forks and preload/rebound shock err on the soft side and while the engine is deceptively fast, it’s also transparently flat and unexciting. The flipside of the stability added by the increased wheelbase and non-adjustable steering damper is that, despite the flat bars, it’s slow to turn. You can hustle it, it’d just rather you didn’t.

So it’s a traditional practical-but-boring BMW then?

Sort of. This optioned-up model does have heated grips and ABS, the upright riding position does deliver good vision when you’re splitting lanes, it does have a reasonable 4.2-gallon fuel tank. But, it lacks the easy-going character of air-cooled, opposed-twin BMWs like the R1200R. Where those bikes feel like unstoppable, everlasting tanks, the F800R is a little more urgent, a little less refined, a lot less comfortable.

There’s three seat options at no cost. The stock item (on our bike) sits at 31.5 inches tall, the low and high options add or subtract an inch from that. With the standard seat and my 34-inch inseam, the pegs are just too high for a bike like this. It’s not a sportbike, so why are my feet up my ass crack? Sadly, it doesn’t feel like adding an inch to the seat height would be a huge help.

That’s the first part of a weird riding position, that has you totally upright, with a very short reach to the surprisingly narrow flat bars. The exhaust pipe also gets in the way of your left boot if you’re toes-on-peg hanging off. The end result is cramped legs, elbows tucked into your chest and, despite the optional fly screen, totally exposed to the wind. You could and probably should fix that with some flat Renthals. Bringing your torso forward a few degrees into the wind would help a lot.

You’re just hating on the F800R because you had fancier bikes in your garage.

It is true that we also had a BMW S1000RR and Aprilia RSV4 all month, plus an MV Agusta Brutale 990R and two Yamaha WR250Rs for a week or so, but we also had a big, heavy, soft, ugly Moto Guzzi Norge too. Know which bike we took out way more than the F800R? That Norge. Why? Well, for one it wasn’t bright yellow, but it was also seriously comfy and offered a surprisingly unique riding experience. More on that in a day or two.

Alright, alright, just tell us what else you didn’t like.

Well, there’s the looks. Bumblebee yellow and black just isn’t appealing to anyone over the age of five and the assymetric headlights that looks so distinctive on the beaked F800GS are just sort of left sitting there in the wind on top of the weedy forks. The engine looks like it belongs in a generator, the seat unit is clunky and the taillight looks like a baboon’s ass. 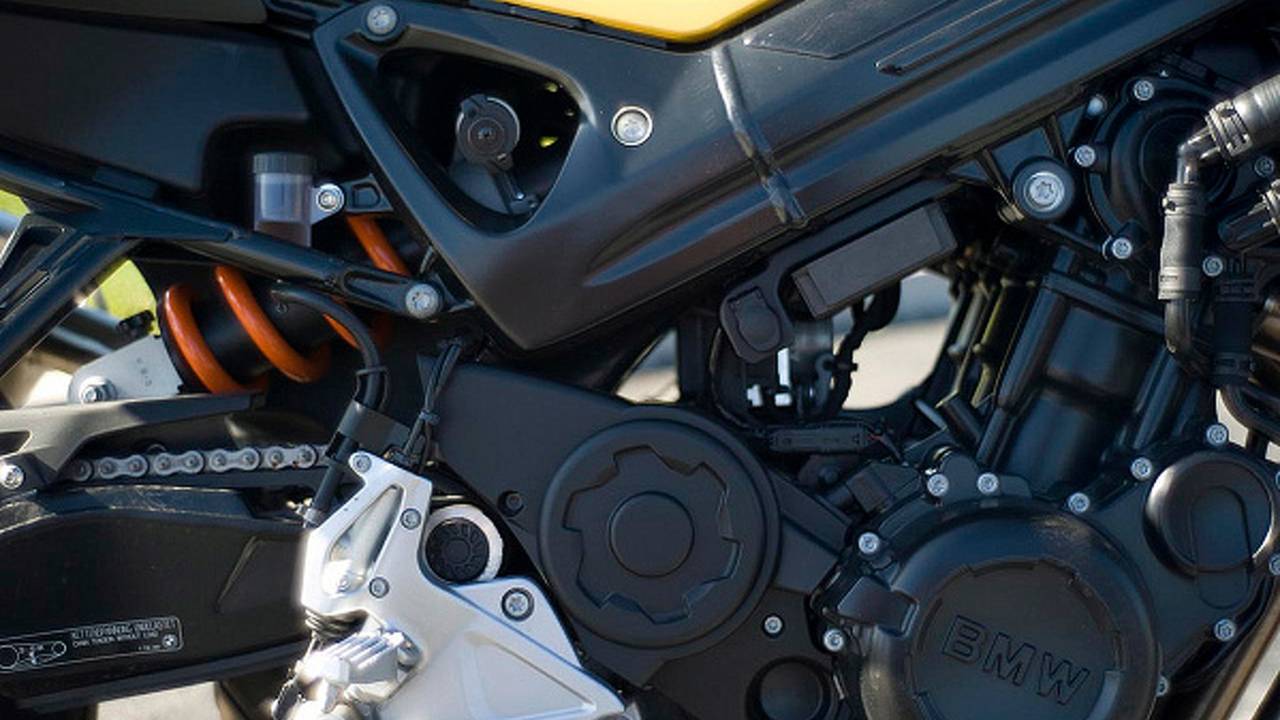 But it does some things well, right?

Totally, it’s not a bad motorcycle, just not of the level we’ve come to expect from BMWs like the S1000RR, R1200RT, F800GS and R1200GS, all of which are essentially perfect. It’d be a great commuter, if you’re short. But being a great commuter just isn’t terribly exciting and, for the price it just doesn’t make sense next to cheaper rivals.

So you’re saying I should buy a Triumph Street Triple instead?

Totally. The F800R starts at $9,950, going up to $11,395 if you option ABS, heated grips and the onboard computer. The basic Triumph Street Triple starts at $8,899 while the R and its fancy suspension and brakes goes for $9,599. The Triumph also has a European badge and is practical around town, but is a shit ton of fun once you’re taking some corners