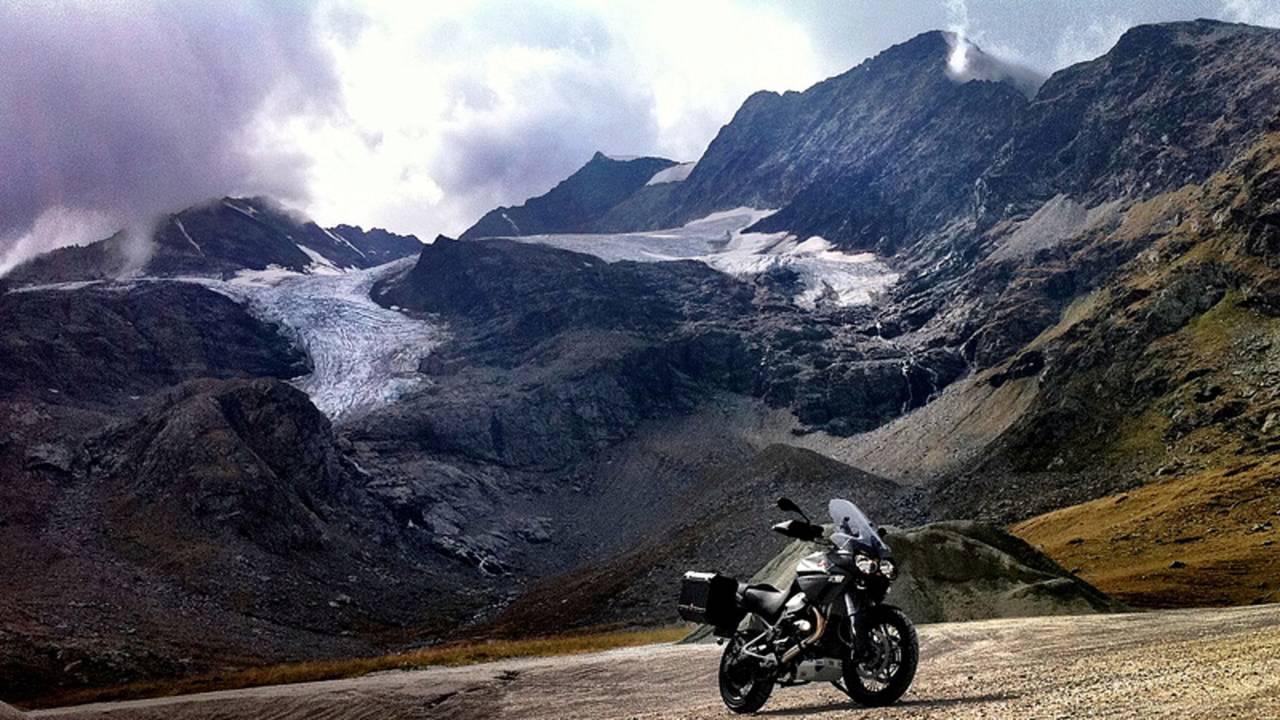 Not the best, but a solid contender.

Parent company Piaggio didn't make a bit deal out of it, but it totally re-designed the Stelvio in 2009 with a new motor and new frame. Is the Moto Guzzi Stelvio 1200 NTX now a worthy alternative to the class-defining GS?

Take the old Stelvio and change the torque curve from 80lb/ft peaking at 6,400rpm to 83lb/ft at 5,800rpm, add a narrower, 4.25×17″ rear rim (capable of accepting enduro rubber), an aluminum sump guard, brush guards, aluminum luggage, engine bars and auxiliary lights and you have the NTX. Add all that to the 1,151cc air-cooled 90° twin making 105bhp, the 8.5-gallon tank capacity and a 598lbs kerb weight.

The 150-section rear, spec’d to enable the fitment of knobbies, but here wearing road-biased Pirelli Scorpions, rolls over on its side in a manner alien to most modern bikes and their too-wide rubber. 1st gear is short enough and the torque strong enough low down — 85lb/ft at just 5,800rpm — that you’re off the clutch and on the power as soon as you’re past that 20mph apex. That new motor really takes off between 6 and 8,000rpm though. Cross that 6,000rpm barrier and the 1,151cc air/oil-cooled twin adopts a much more menacing, deeper exhaust note, delivering 105bhp.

The NTX decreases rear wheel width to 4.25-inches to make selection of dirt rubber easier and receives a host of additional accessories as standard. Switchable antilock brakes, traction control, panniers, crash bars, spotlights, wire wheels, an extra-large windshield and additional wind deflectors on the side, plus bark busters. All that boosts the distance capability and comfort of the bike while making it seriously rugged. You get the feeling you could throw it down in one of the hairpins, pick it up, and ride it a couple hundred miles back to Mandello with only an apology to show for your trouble. In matte black — the only color available on the NTX — the whole thing feels ready for the Zombie Apocalypse. It just needs “Medusa” decals on the panniers.

This Moto Guzzi is invariably compared to that BMW. You know the one. And not without reason, not only are the specs extremely similar — air-cooled longitudinal twins (the BMW is now partially water cooled), single-sided shaft drive swingarms, single-plate clutches — but the Italian bike was created specifically to benefit and conquest sales from the German. Some things about the GS are better — it’s nearly 100lbs lighter than the NTX to start, although it admittedly comes with fewer options — but there’s two big differences that right here, heading down a wet alpine pass, really make the Guzzi shine:

Conventional forks and traction control. On the Stevio, applying the front brakes compresses the front suspension, steepening its angle and making steering both faster and more confidence inspiring as weight transitions to the front wheel and the contact patch grows. Say what you will about the benefits of BMW’s dive-free Telelever, but when you want front end feel, there’s nothing better than a traditional set of telescopic forks.

A characterful, fun, practical Italian alternative to the reigning BMW R1200GS. If you want an ADV bikes a a versatile tourer, look no further. If you actually plan to head more off-road than a fire road, you're going to want something lighter, like the KTM or one of the mid-capacity ADV bikes like a Suzuki V-Strom 650.