How Airbags Protect You In A Motorcycle Crash

Learn how the latest motorcycle airbags protect you in a motorcycle crash. Plus, see video of them in action.

Why would I want to wear an airbag?

Safety, Sherlock. In all seriousness, airbags are capable of absorbing greater amounts of energy than traditional motorcycle “armor,” decreasing the chances or severity of injury. This was made not-painfully obvious in June, when World Champ Marc Marquez crashed at Mugello while going 209.9 mph. His airbag-equipped Alpinestars TechAir suit took a hit of more than 25 Gs (its maximum reading, the actual impact was likely more) on both its left and right shoulders, but Marquez walked away uninjured.

All Alpinestars and Dainese riders on the MotoGP grid are now wearing airbag-equipped racing suits and the technology is beginning to trickle down to lower forms of racing and is even now available to the general consumer, albeit at a high price. The Alpinestars TechAir suit retails for $4,999. 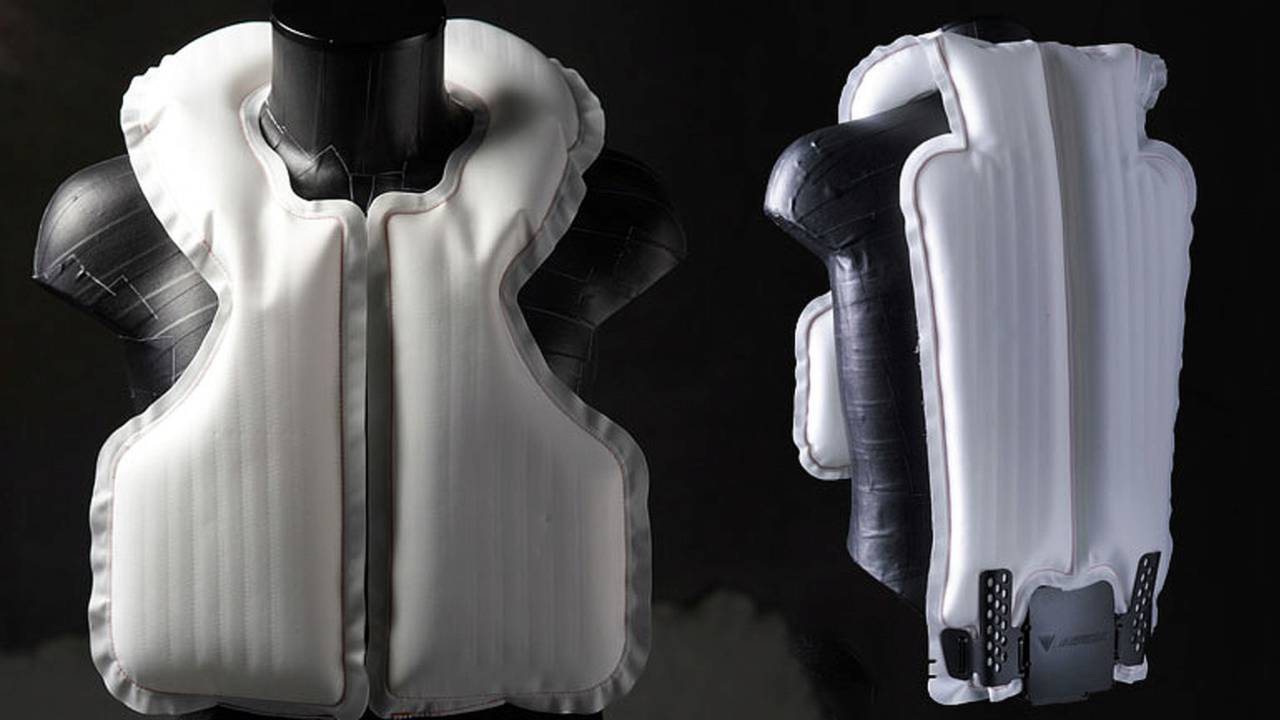 Oh, I see, so why am I not wearing an airbag already?

Well, it’s complicated. Literally. Alpinestars and Dainese will argue about who began development first, but we know that Alpinestars began development of its airbag system all the way back in 2001. Even their top racers like Jorge Lorenzo didn’t begin wearing the airbags until 2011. Systems appropriate for everyday street use are in development, but require much more sophisticated software and sensors.

“With the race system, you tend to crash alone, in a highside or lowside,” explains Alpinestars lead engineer Colin Ballantyne. “On the street you tend to hit something or something hits you. Impacts also tend to be more focused around the chest.”

There are airbag vests on-sale now, designed for street use. They use lanyards, attached to the bike, that fire a CO2 cylinder when pulled, not the sophisticated accelerometers and on-board computers employed by Dainese and Alpinestars. We’ll touch on those later.

Why don’t TechAir and D-Air protect a racer’s entire body?

We had the same thought and asked Ballantyne why the systems didn’t expand coverage to the neck, the last area of a rider’s body not covered in leather and armor. “Certainly the neck is a very dangerous injury, but looking at the data, the chance of you actually breaking your neck in racing is tiny, just .02 percent,” he explains. “You’re more likely to die from an impact to your head than breaking your neck. So, do you invest in a system for an accident you’re never likely going to have or in something riders actually need? Statistics indicate that at some point in your career you will injure your shoulder or collarbone, so protection in that area is most useful.”

And how do those two system differ?

Both systems are incorporated into a suit’s aerodynamic hump and inflate inside the suit. Both are also designed to deflate quickly to allow for race restarts, but Alpinestars’ airbag takes 20 seconds to fully deflate to Dainese’s 5-second time. TechAir allows for a second discharge in case of an accident after a race restart.

TechAir also incorporates accelerometers and gyroscopic sensors like in the Dainese D-Air, but Alpinestars does not make use of a GPS unit. That might help explain the weight difference between the two: TechAir weighs 500g to D-Air’s 650g weight.

The reason that D-Air incorporates a GPS sensor is in order to measure speed. Dainese is serious about only triggering airbag inflation when it’s really needed and claims the system is able to tell the difference between the kind of low-side where you slide without tumbling — not necessitating airbag protection — and the kind of low-side where you bounce and spin along the ground — requiring the added impact protection.

TechAir also arms only when track riding conditions are detected, using its four, three-axis accelerometers to determine when that occurs.

Both suits use airbags inside the shoulders. When the airbag fires, the suit’s outer shell grows via accordion stretch panels. The suits retain their existing shoulder armor, so are extremely safe, airbags or no. 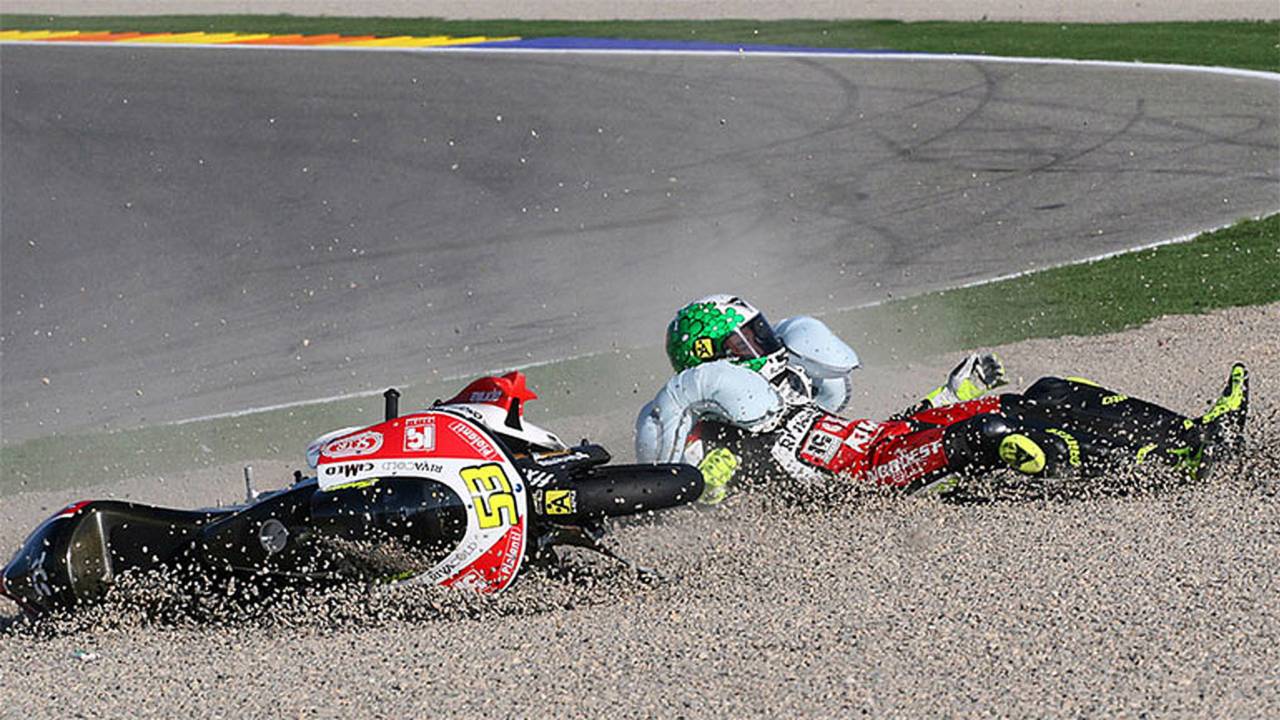 Without exception, all of those systems — HitAir, RS Taichi, Spidi, et al — rely on a lanyard connecting the CO2 canister to the bike. Much like the safety lanyard on a JetSki, you fall off and it pulls the cord cutting the power. Trouble is, while an airbag is going to provide excellent impact protection in a crash, the lanyard firing method means it might not work in all accidents and can also lead to serious day-to-day inconvenience.

Right, so I ride on the street and want some additional protection. How do I get it?

Well, airbag innovators Dainese and Alpinestars are working on just that. Both companies have street airbags in development (an early D-Air Street system is already on-sale in Europe) that will massively increase rider protection in those most-common motorcycle accident scenarios described above.

Dainese says D-Air Street will give wearers a 75% reduction in impact forces to the back over a CE2 back protector and an 89% reduction over a CE chest protector. Dainese splits the components of D-Air Street between rider (or pillion) and bike, mounting accelerometers on the furthest-forward part of the bike — the lower forks — that can detect an accident and trigger inflation in .025 seconds. That's before you even know you’ve hit something. There’s zero potential for accidental inflation, D-Air Street’s connection between user-worn garments and the ECU is completely wireless.

A lean angle sensor mounted under the seat will detect falls or slides, again triggering inflation and providing all the above protection, in an incredibly short period of time.

If you live in Europe and can afford a very expensive piece of add-on protection, then you can enjoy that massive advantage over existing protectors that D-Air Street brings right now. The rest of us are going to have to wait a while for the competition and consumer awareness to drive availability and affordability.

Would you ever buy an airbag system? Is it something you'd want to wear every day?