The Aprilia Dorsoduro 1200 promises to be a fun bike, wrapping a 130bhp/85lb-ft, 1,200cc v-twin engine with edgy styling, nice components and an upright riding position.

The name of the Dorsoduro’s game is fun. It doesn’t exist in any rigidly-defined class like a 600cc supersport or single-cylinder supermoto does. Heck, it’s not even really a supermoto, more a naked bike with some height. By not adhering to class distinctions or existing archetypes, it hopes to expand its appeal to a wide variety of riders, something it’s comfortable ergonomics and very accessible, $11,999 price help with.

Aprilia’s own, 1,197cc, liquid-cooled v-twin provides motivation. Rather than chase outright power, it delivers a very fat torque curve, developing 85lb-ft in its mid-range at 7,200rpm, while peak power of 130bhp arrives at 8,700rpm. That’s a ways behind the $16,995 Ducati Multistrada’s 150bhp and 92lb/ft figures, but in action, on the road, it doesn’t feel like there’s anything in it.

Swing your leg over the very tall, 34.25-inch seat and you settle into a narrow, long, dirt-style saddle. Despite that narrow width, it’s actually very comfortable. Something aided by the surprisingly low pegs, which really allow taller riders to stretch out on long rides.

Front forks are nice, if not overly-fancy 43mm, USD, fully-adjustable Sachs units while the shock is also a fully-adjustable Sachs. It’s side mounted, sans linkage, as is becoming a defining feature of non-superbike Aprilias. One of the main areas in which the Dorsoduro definitively departs from supermoto practice is in that suspension. It’s travel is only 6.3 inches (front) and 6.1 inches (rear), which is much closer to that of a road bike than it is something capable of travelling off road.

In contrast, the smaller, lighter Ducati Hypermotard SP we recently reviewed has 7.3 inches of front suspension travel and 6.9 at the rear. That’s part of the reason it feels and rides like a real supermoto.

The Dorso does maintain a dirt bike’s wide handlebars, complete with swoopy bash guards. Those guards come in handy, while the bike itself is remarkably slim, the bars are 36.4 inches wide, meaning the plastic guards do tend to familiarize themselves with car wing mirrors. 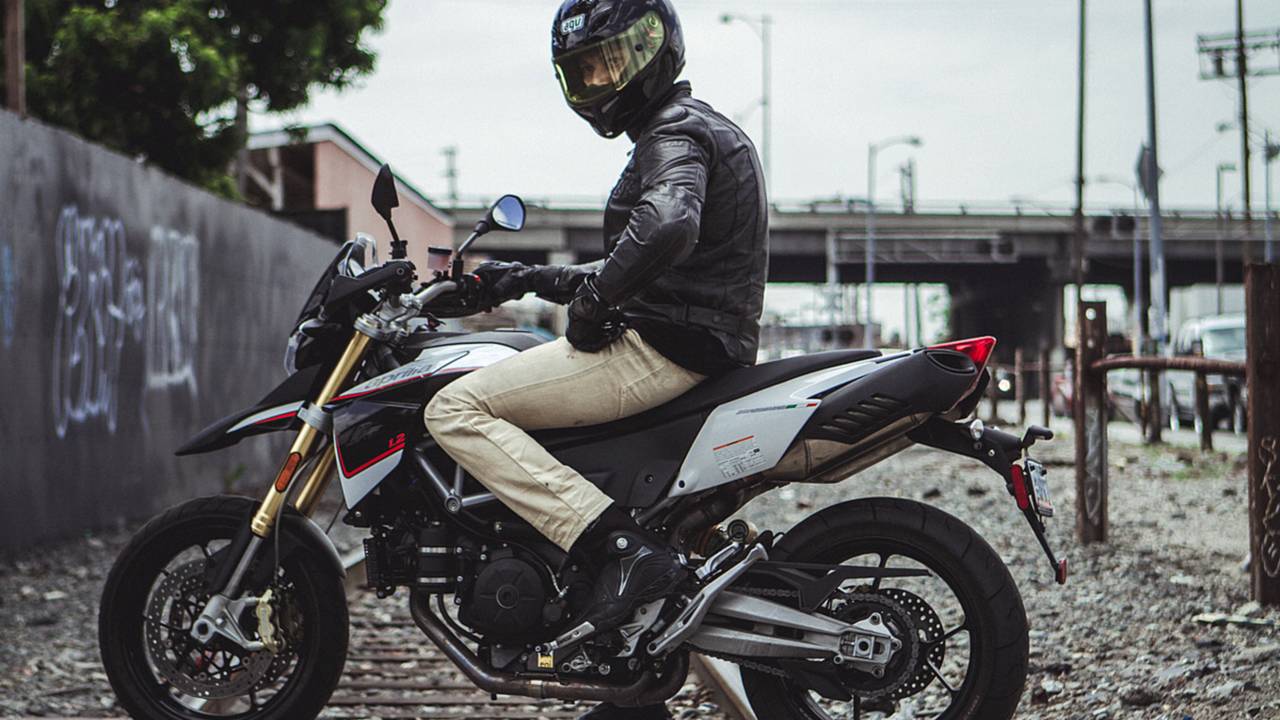 Sean, Adey (pictured in all the photos) and I split time on the Dorsoduro over the course of several weeks, riding it through LA traffic, up and down the highway and through some of the best canyon roads in Southern California.

You feel every one of the Dorsoduro’s 494lbs of kerb weight, mostly because it is so tall. That makes it awkward the first few times you try and thread it through dense traffic. Abrupt reaction from the ride-by-wire throttle, regardless of which of the three modes you have it set in, doesn’t help there.

But, sitting up high, with good brakes and wide bars, you’re able to identify risks a long time before they become problems and are equipped with excellent tools for reacting to them.

On the highway, the Dorsoduro fairs better. That dinky little screen around its headlight actually doing a good job of keeping much of the wind blast off your torso. The engine really gets into its stride at higher speeds too, taking us up to an indicated 160mph at one point. It’s surprisingly comfortable and stable at that speed for a bike that’s so tall, upright and unfaired.

In the canyons, the Aprilia excels through 3rd and 4th gear sweepers, where it’s stable and planted and smooth, flicking between them with the aid of those wide bars. But, get it into the tighter 1st and 2nd gear stuff and that weight again becomes apparent. On The Snake or a similar road, the suspension is suddenly too soft, the throttle reaction to abrupt and the steering too imprecise to delivery much speed. Ground clearance is also surprisingly limited. It’s just the pegs that touch down, but they do touch down very early. 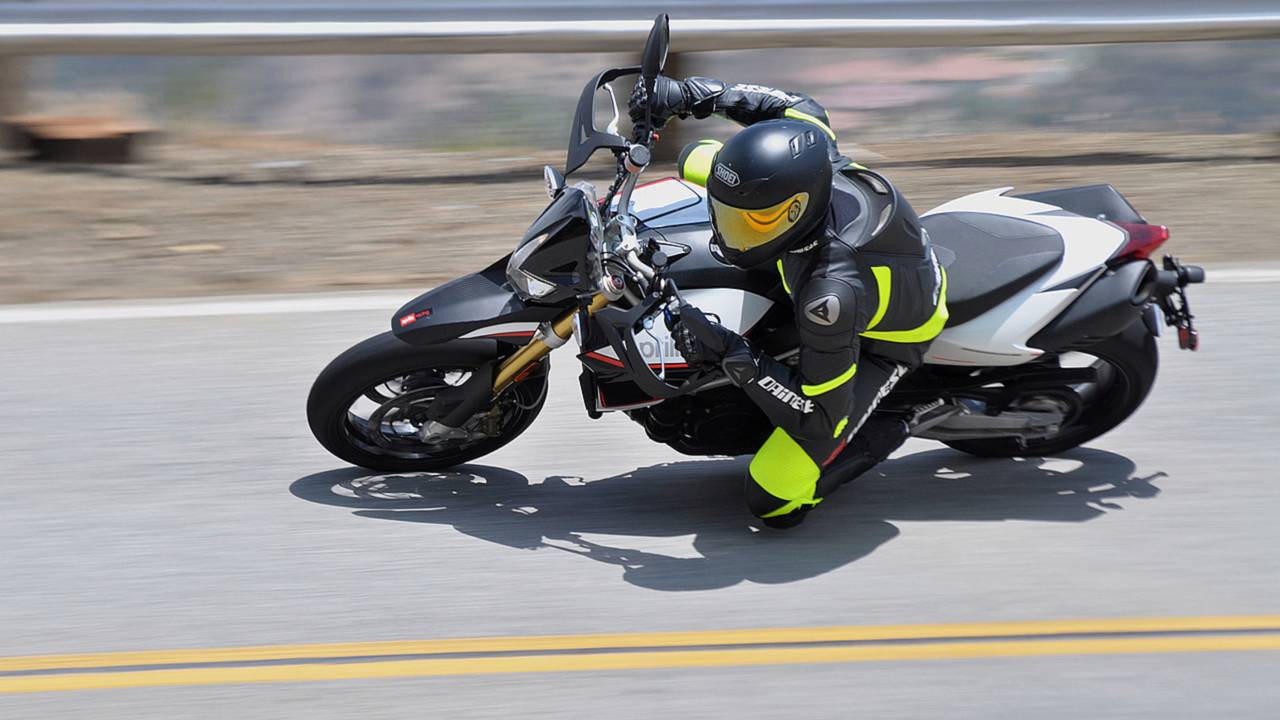 Comfort, once you’ve climbed over that tall seat, is exceptionally good for a naked bike with a dirt-style seat. And sitting so high up, without a windscreen in the way, you have unrivaled vision.

The brakes are strong and predictable. Proving again that you don’t need race-spec components to deliver excellent braking on the road. Plain-Jane Brembo radial calipers are much more user friendly than the fancier Monoblocs or new M50s as used on the RSV4 R and Factory, respectively.

This is also an extremely striking, good-looking design that, complete with restrained color choices, looks years newer than most other bikes, even though its now a six-year old design.

Fueling is abrupt and jerky. We’ve ridden Dorsoduro’s equipped with aftermarket exhausts and their accompanying engine maps, which are flawless, but Aprilia appears to struggle to combine smooth fueling with legal emissions on this model. Not something that’s a problem on the faster V4 range.

At over 34 inches, the seat is going to be too tall for most riders and, at 494lbs (wet), it makes the bike difficult to manage for all but the strongest. Even Adey, who packs over 200lbs of muscle onto his 6’3” frame, struggled to pull the Dorsoduro backwards down my gravel driveway.

Surprisingly limited ground clearance is the penalty for all that leg room. You will drag peg in tight corners and that will limit your outright speed.

Despite its relatively short travel, the suspension’s damping is overly soft, causing the bike to wobble and weave if you really start putting serious cornering forces through it.

In combination, all of those factors can make the Dorsoduro feel surprisingly clumsy.

$11,999 is surprisingly cheap for a slice of Italian exotica with such a big motor. A 2013 Honda CBR600RR is only $500 cheaper, while the smaller Ducati Hypermotard starts at $11,995. A Triumph Speed Triple, of which the Dorsoduro reminds us of for its performance, capability and comfort, is $12,799, but does include ABS. 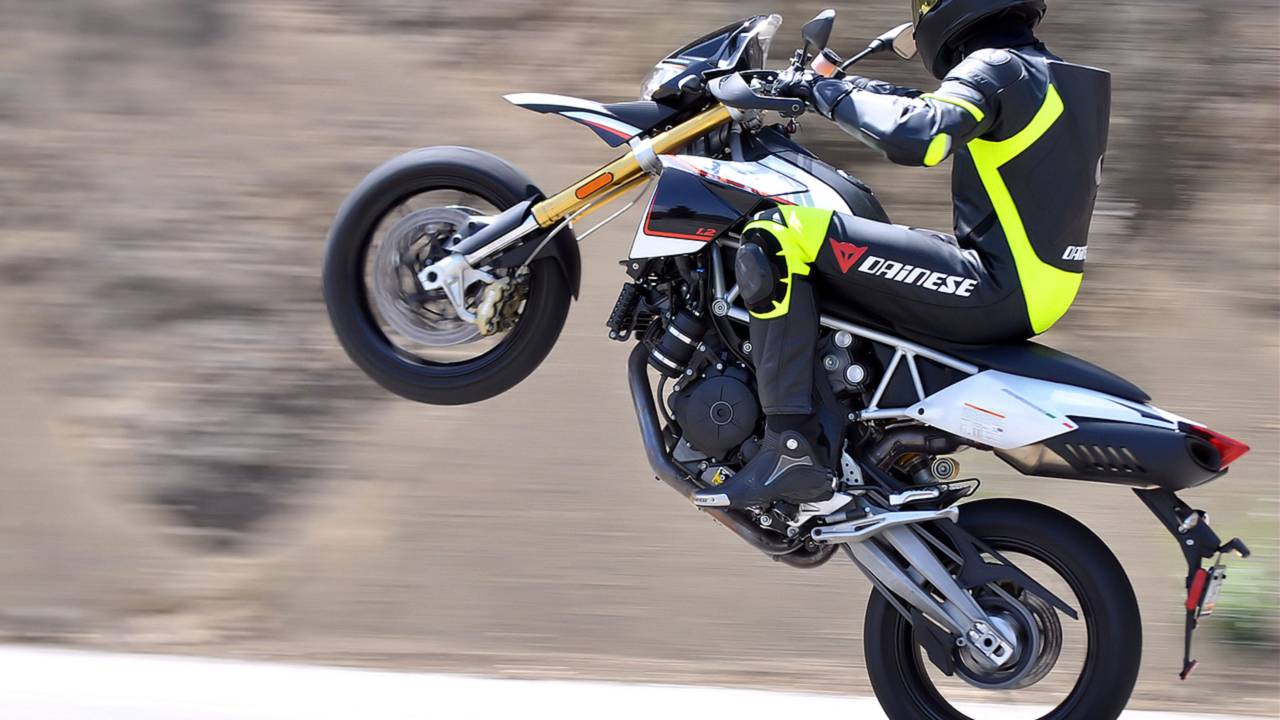 The Aprilia Dorsoduro 1200 is a fun, fast, capable motorcycle, but is a little too tall and a little to heavy for smaller riders and a little too limited for the really fast guys. If you just want to play though, this is going to be a good looking, rare, fun bike to have. If you want to wheelie, this is your motorcycle.