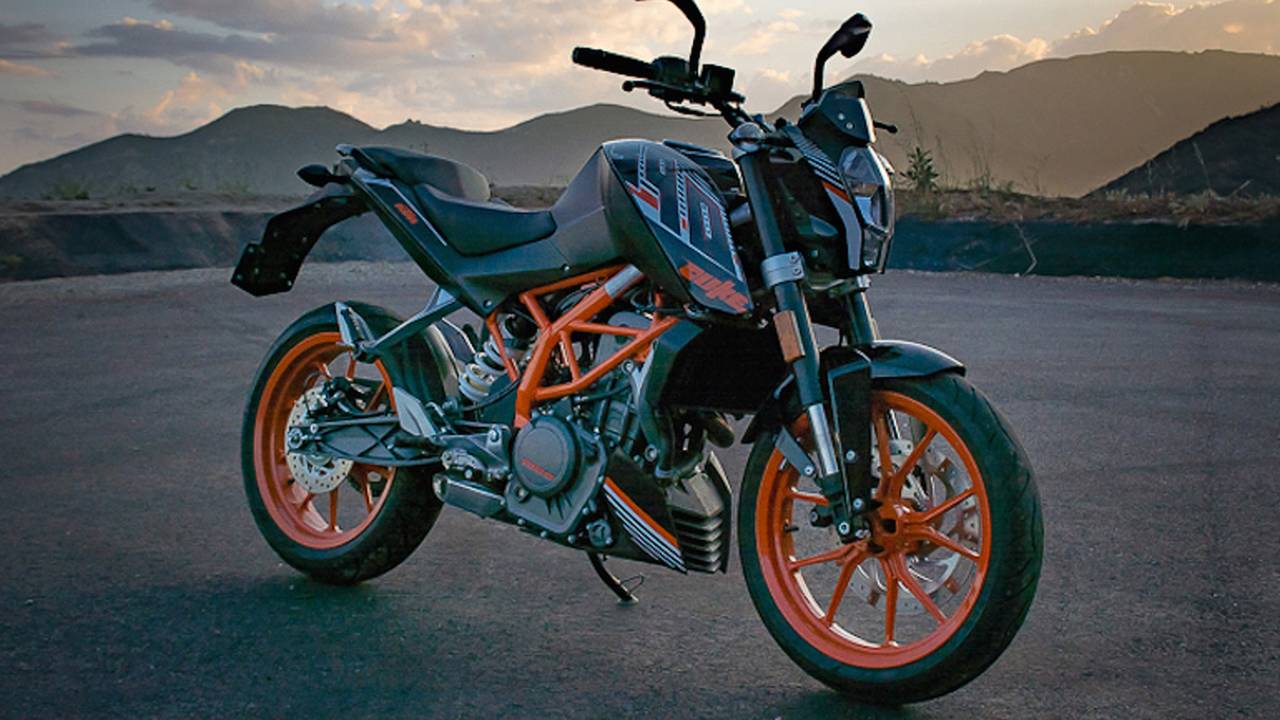 Jim Downs:  I already miss the KTM 390 Duke. There have been plenty of different bikes we could have ridden over the past two months, but the 390 has been my first choice every day. It's not the fastest or the most comfortable for my 6'3" frame. But having ridden it as a commuter on highways and city streets, and as a weekend sportbike on back roads and in the canyons, I can say with confidence it’s one of the most fun motorcycles I've ridden in a very long time.

Hey Man, Is That FREEDOM ROCK?

I’ve also been amazed by the attention the Duke gets from a wide cross section of people—everything from crusty ADV riders to leather race-suit wearing sportbike riders, female motorcyclists, old timers, hipsters and beginners, they all ask me that same thing: "Hey, is that the new 390 Duke? I love that thing! How is it to ride?"

Jesse Kiser: I had a UPS truck driver come running across a parking lot to ask me about it. He said, “I mean, does it do highway speeds?” I laughed and said, “I did a lot more than the legal limit on the way here.”

JD:  It's faster than you think it's going to be for a bike that only displaces 373cc's.  With 43 horsepower and almost 26 foot-pounds of torque, I've surprised guys on bigger bikes at stoplights. The little single growls with a slight roughness that makes you want to ride it hard.

It's light, just north of 300 lbs dry, and incredibly agile, allowing you to quickly change your ride line in any situation, from parking lot speeds to 80 mph on the freeway, or while fully committed in a corner.

All of these things come together to give the 390 a unique personality that's simultaneously docile and angry, manageable and wild. It leaves an impression I have never experienced on any bike before.

When they asked me if I would buy one of my own, I never hesitated to say yes.  here's a lot of motorcycle packed into that diminutive frame, and it's only $4,999.

JK: Maybe it was the evolution of the 750s and inline 4-cylinders from the ‘80s, but back in the good 'ole days, a sub-400cc bike was commonplace and borderline big. Now, the common misconception is it’s too small. It’s the whole “600s are for beginners” crap. I’d like to see the guy who says that ride so much as a modern 125cc to its absolute fullest potential, then call me about how only a liter bike will do. Ok, enough of that rant.

While this is a phenomenal beginner bike, I don’t believe it’s the absolute best first timer's bike. We discussed this in our comparison video, but the Honda CB300F (the only other naked/standard 300cc bike. The others are full-faired  sportbikes) is a more tame, calm, and comfortable bike, making it slightly better for a beginner.

A common comparison I’ve seen with the 390 Duke has been against the Honda CB500F, but not because the 500 is in the same class of bike, but because the KTM, on paper, kicks the other 300s collective asses. It shouldn't be compared with a bigger bike, because spec-to-spec it’s dimensions are nearly identical to that of the CB300F, which is why we compared the two in our video.

Fighting Above Its Weight

Experienced riders like us can have a ton of fun on that bike. If I owned it, I may never grow tired of it or “outgrow” it. Until I start backing that thing in when I pull into my driveway, I’ll never ride the bike to its fullest potential and subsequently, never be bored with it.

This bike hits way above its weight class. It’s a champ. No other bike in the sub-300cc class has inverted forks, a trellis frame, that gorgeous swing arm and NONE—I repeat no other 300cc bike—come standard with ABS in the USA!

It’s not only light weight, but its also incredibly nimble. I’ve ridden bikes that are light, but feel heavy and vise versa. For the Duke, it’s from the ground up with the Trellis frame and suspension. That 43mm inverted fork set-up is by far my favorite part of the bike. It’s stinkin’ 43mm! That’s the same as almost any liter bike.

The Duke 390’s front forks and the rear shock are built by WP, who makes all of KTM’s suspension goodies. This is probably due to the fact that KTM bought them up a few years back. Of course, that front end is much skinnier than a big bike, but it still manages to remain planted in a corner and straight on the highway.

But that’s enough of the spec sheet. I feel like we’re showing some random person photos of the 390 on our iPhone like a newborn, making vroom noises as we look at pictures while the person just wants to get away. What sucks about the KTM?

Some Chinks in the 390’s Armor

JD: I hate when people start showing me pictures of their babies.  My counter is to start showing them photos of my cats and that usually puts an end to it.  It’s an impressive little machine, but there are some drawbacks.

Give Me a Brake!

JD: The Bybre brakes, which are made in India—like so many of the parts on the bike—by Brembo are the most obvious flaw on the 390. The standard ABS works well, but the front brake simply doesn't deliver the kind of assertive stopping power needed for aggressive riding.  Its response feel is mushy, and hard decelerations require all four fingers on the brake lever.

During aggressive front brake input, the hand lever itself comes to a stop too close to the throttle grip to allow me to keep my ring finger—or even my pinky—on the throttle. Because I have to reposition my hand off the brake lever, smoothly rolling back onto the gas and out of the corners is way more challenging than it should be. If I owned a 390, I'd look into addressing this with aftermarket upgrades.

JK: I’d have to wholeheartedly agree with you on the braking front. Just moving it around the parking lot yesterday reminded me of that problem. I let a stunter (who unfortunately cannot be named due to a strong relationship with another brand) ride the bike for some photos. He made the same complaint when trying some stoppies, calling it four-finger braking.

JD: The issue with the soft front brake is further compounded by a long throttle input response throw and too much slack in the throttle grip between its fully closed position at dead stop and where it begins to pour coal back on the fire. This is another problem I'd seek to fixed if I had a 390 of my own.

The shortcomings with the stock brakes and the throttle can become a literal handful, especially when operating the bike within it's most peaky torque output RPM range. Ultimately, the bike's lightness and crisp handling overcome the little stuff.

JK: It’s a like a club with the perfect music and right vibe, and then when you grab the brake, a record screeches to a halt. It’s an abrupt (no pun intended) feeling because so much of the bike is hitting above its weight class in performance to where the brakes just don’t feel right. It’s like having the performance of a liter bike with the brakes of a scooter.

Is there a Dirt Bike in There?

JK: Now speeding up again...I’ve had a hard time trying to figure out the torque curve from just my butt dyno. It can be the difference between a fun bike and a boring bike. The throttle slack was excessive, but it didn’t bother me that much. The hooligan style of the bike caused me to ride it like I was 16 again—revving at stop lights and flicking the throttle like a dirt bike. It had a very motocross bike feel to the revs, which I loved.

I’ve been surprised KTM missed that marketing opportunity with tag lines like, “KTM’s Motocross History in a Naked Streetbike.” It had that obvious KTM feel to it—a peppy off-road bike in a naked, hooligan package.

The little thumper made great down-low power, but at the very, very bottom of the RPM range it's flat. We had a total of four riders all ride the bike and every single one (including our stunter) stalled it at least once.

The torque curve was flat at the very bottom, then a hard pull of exciting torque (despite it’s measly 26 ft. pounds rating) followed by a very gradual slope downward. It never aggressively felt off though, which is why it wasn’t that uncomfortable on the highway. Although, it had more of a fall off in power than a Kawasaki Ninja 300. The Ninja’s twin may be a little smoother on the highway. Our stunter said a Ninja is easier to wheelie because it has a little longer powerband in the higher RPMs—letting you ride out a wheelie for more distance.

It’s Not a Touring Bike

JK: That would have to be another complaint of the bike—it wouldn’t be my first choice on a cross-country trip. The vibration in the bars and pegs weren’t as bad as the CB300F. This was mostly due to the fact that you had to twist the Honda more to make the similar speeds, but a parallel twin like the R3 or Ninja is much smoother.

If I owned a 390, I would upgrade the tires and brakes; I would probably leave the engine alone. If I really wanted to, and really had the money, I’d probably do a stage one style upgrade with a filter, muffler, and tune. That may help the throttle response, but it would probably also encourage me to flick the throttle even more like a dirt bike.

I now laugh when I think about the Duke 690. The 390—in my eyes—has made that bike almost obsolete, but KTM sales I’m sure wouldn't agree. That bike is still there for the guy who thinks a 390 is reserved for the MSF beginner class and wouldn’t be caught dead on something smaller than a 600. With essentially the same suspension and engineering, why go bigger? Of course, that’s only if you take the highway commute completely out of the equation.

Conclusion: The 390 Duke is a Riders Motorcycle

JD: I think your comparison to the feel of riding a dirt bike nails it. The single exhibits a roughness that if combined with a different exhaust pipe would go “BRAAAP!”

Another one of our editors described the edginess of the 390 Duke as something you’d either love or hate.  While you and I fall into the “love it” camp, I think that observation gets at the heart of your feeling that the 390 isn’t exactly a pure beginners motorcycle. The Duke has a ton of personality that in the end makes it a riders bike.