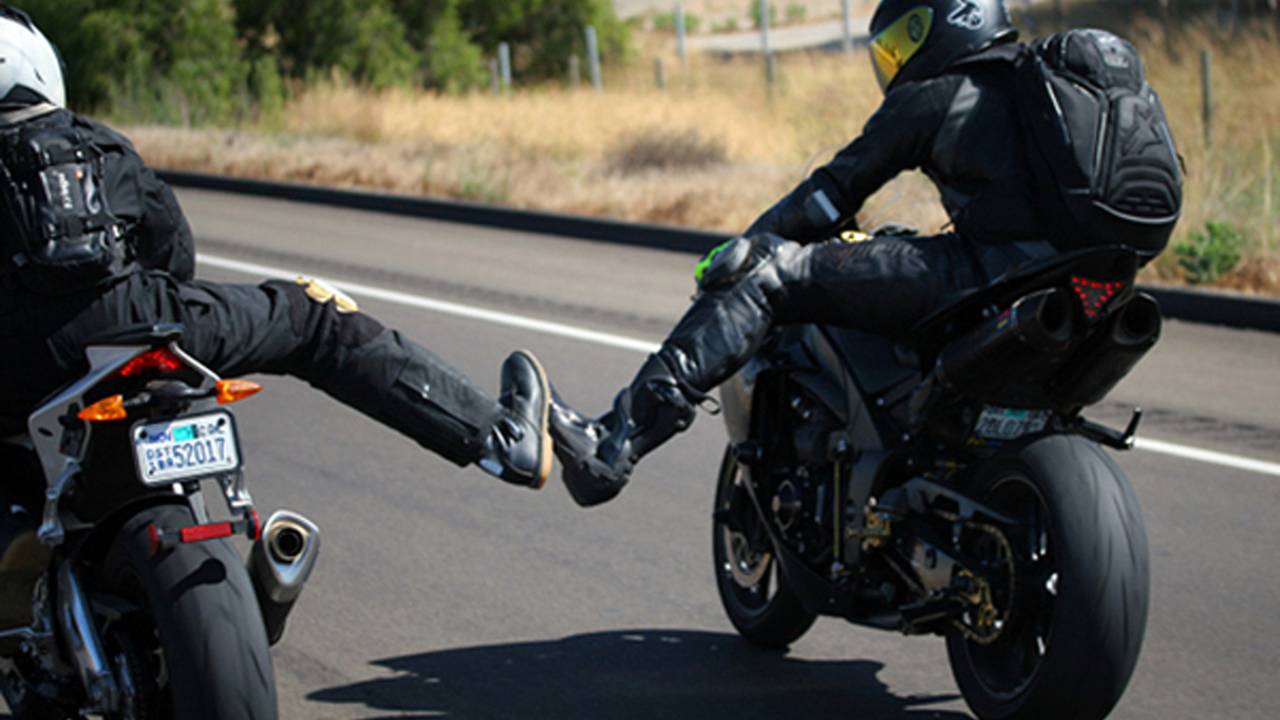 13 bikes that will make 2013 awesomeExcited for next year? You should be. We're getting not only some of the best bikes ever, but getting them at...

Excited for next year? You should be. We're getting not only some of the best bikes ever, but getting them at affordable prices, accessible performance levels and with appealing design too. Here's 13 of the best new bikes coming in 2013, all guaranteed to not disappoint.

The recipe here is simple. Take one of the fastest, most fun naked/big sumo thingies out there an fit a big fairing, big tank and a comfy seat. What you’re going to pull out of the oven is a bike that’ll be all-day comfy, capable of hauling a pillion and luggage, but also a blast to ride on a good mountain road or even around a city. That latter point being where most sports tourers fall flat. A great only bike for someone that needs something that’ll do everything, very quickly.

Just sat on the new, 821cc, liquid cooled hypermotard for the first time last week. First impressions? Holy crap it’s small! Much slimmer than the outgoing, air-cooled version, it feels approximately the size of a DR-Z400. You sit right up on top of the front wheel too, in true supermoto fashion. All that and they added 20bhp and dropped 9lbs from the old model. Looks a little dumpy in photos, but in person, those curves create a very nice looking motorcycle. This is the one I’m currently most lusting after.

CBR500R, CB500, CB500X. Sportsbike, naked, ADV, all powered by the same 47bhp parallel-twin and starting at just $5,500 (sans fairing). The CBR is a do-it-all in the old F4 mold, the naked is styled like a CB1000R and the X should be all-day comfy and able to haul plenty of luggage for big trips and camping and whatnot. No matter which flavor you chose, you’re going to rewarded with practicality, comfort and frugality. Fun too, if bikes like the CBR250R and NC700X are anything to go by, anyone of any skill level is going to enjoy riding them.

Already the best bike for fun street riding out there, 2013 drops a little weight, sharpens up the suspension and fits a new, low-slung, GP-style exhaust for great mass-centralization. That cast subframe looks way less plasticy in person than it does in photos and the juxtaposition of sharp panels and angular headlights with the very industrial-looking engine feels right in a way that evokes both speed and mechanical function. That 675cc triple is one of the most unique, evocative motors in motorcycling too.

A cruiser?! Out of all the new bikes this year, it’s this one that I find myself showing to most people, most often. Somehow, cutting the screen off a Goldwing and turning the rear into a bagger just worked. That donor bike was already utterly unique with it’s flat-six motor and freakishly good handling, now the emphasis is on enjoying that over just pounding out highway miles. Showed it to Roland Sands and he said, “I’d ride one.” Big compliment.

600s are the absolute best performance bikes out there, mixing intuitive handling with huge speed in a package that still requires you to actually ride the bike, hard. The new Ninja is the latest, making it the greatest. The slightly larger, 636cc motor is a little more flexible and the addition of traction control (first in the class), is a huge step forward. Sharp looks help too, of course.

This little thing just shreds, whether you’re on-road and off. It’ll go anywhere more specialized bikes can off-road and is way easier to ride for novices and it’s actually better on-road than other dual sports like the WR250R or DR-Z400S because it’s dead stable right up to it’s 85mph top speed. Keep it pinned and it’s totally happy on the highway, even over rain grooves. Just figure 75mph as a reliable cruising speed. I’ve rarely had so much fun riding a bike around city streets either. A general cohesiveness has it keeping up with supposedly much faster bikes. 74mpg and $4,500 out the door won’t break the bank either.

It might be hard to look at, but this loose assemblage of plastic, aluminum and steel is probably the greatest all-round motorcycle out there right now. Which is definitely saying something when it’s just $8,300. Equally at home touring, commuting or scratching, you can even fit a set of knobby tires and enjoy real off-road ability. It also happens to be the best two-up bike I’ve ever ridden, retaining full composure and control even while carrying two dudes totaling 390lbs and 12’ 7”. The “Adventure” version comes with a big screen and the world’s most comfortable motorcycle seat, but also panniers wider than most small cars. Probably worth starting stock and working your way smartly through an accessories catalog. If I was a smarter person, I’d buy one.

We totally fell in love with the 990 Adventure when we ran one long-term for the first half of this year. This new Baja special is the last before the new 1190 comes in. Adding knobby tires and some soft luggage as standard, it’s a good deal and all signs point to the 1190 sacrificing its dirt ability to go all soft and road-oriented. That’s a shame, because this was the only bike ADV bike with genuine dirt capability. Unlike smaller dual-sports, it’s good on the road too, giving sports bikes a run for their money in corners and touring with the best of them. A future classic.

No word on when this little hooligan is making it Stateside, but when it does, you’re going to want one. Why? 320lbs (wet) and 44bhp combined with quality suspension and brakes. Oh, and signs point to a price around $6,500. Worth waiting for.

Even if the 946 just had new looks, it’d be on this list. Just look at the thing. But, the story doesn’t stop there. An all-new, 125cc, four-stroke motor boost fuel efficiency 30 percent to 129mpg while also adding more horsepower and torque for a total of 11.4bhp and 7.9lb./ft, but retains its simplicity with air cooling. Exactly the bike Vespa should be making in the 21st century and probably the most stylish powered two-wheeler out there.

Holy shit, just look at this thing. For an extra $2,000, Guzzi will sell you the Record Kit, consisting of that fairing, kick-up seat, rear sets and clip-ons, utterly transforming the V7 both in looks and riding position. The V7’s already a stunning bike, coming in at a full 100lbs lighter than the Bonneville, so focusing the riding position and looking like this just creates one of the most special bikes out there.

Finally on-sale, the Empulse is the bike that’s really going to put electric motorcycles on the map. That’s because it’s not just some poor excuse for a motorcycle that happens to be powered by an electric drill, it’s a badass performance bike that’ll out-handle pretty much anything out there. Seriously, it’s one of the most confidence inspiring, characterful, fun experiences on two wheels and that it just so happens not to be super loud or emit pollutants ends up being added value. Straight-line performance is only on par with a middleweight twin like a Ninja 650, but so good in corners you just won’t care. Believe the hype on this one.

Any other bikes that you'd add to the list?