The Italian Cruiser - Moto Guzzi California 1400We've reviewed this bike before. Back in May of 2013, Tim Watson espoused on his feelings on the...

We've reviewed this bike before. Back in May of 2013, Tim Watson espoused on his feelings on the Italian cruiser and pointed out its pros and cons. It’s a heavy cruiser with plenty of qualities on both sides of the fence. Personally, I’ve been on both sides of that fence and in all the surrounding neighborhoods, having grown up on dirt bikes and graduating to sport bikes, dual-sports, cruisers, and a few race bakes disguised as street bikes. This diversity created an open mind when it came time to check out the new Moto Guzzi California 1400, which is the same bike as last years, save for some color changes.

The Moto Guzzi California Custom models looked cool, with their trademark Moto Guzzi transverse V-twin cylinder heads poking out of each side of the fuel tank (or tank cover as they are these days). The Guzzis had an attitude that was markedly different than the other bikes trolling nearby Colorado Blvd. in Santa Monica. The Touring models are the same as the Custom models, with slightly higher handlebars and windshields, driving lights and hard saddlebags.

The Touring model looks good, but personally I didn’t like the two-tone black and white seat and overly obvious chrome “grab handle” around the seat. The bike I picked for the day came in black with white accents and it wasn’t my favorite color of those available. (What do you think of the color scheme? Comment below.)

Upon turning the ignition key and pressing the keyfob’s tiny security button (which is easy even with gloves on I was immediately struck by a gentle shake that was far less noticeable (or offensive, depending on your point of view) than the last Harley I drove, yet quite a bit more manly than my previous Honda. Whereas the Japanese bike was as smooth—some would say as soulless—as a sewing machine, the Guzzi seemed to say, “Hey man, I’m a motorcycle. Pay attention!”

The rubber-mounted 1400cc twin could be felt for sure, but it wasn’t so obnoxious that it would vibrate your hands to sleep. It felt raw and  more superior to the hipster scooter.

I felt the torque as soon as I let out of the clutch. The 90-degree, 4-valve V-twin is rated at 87 ft-lb of torque and the torque curve is as flat as a pool table. There’s plenty of grunt to make you look like a hero. No need to play with the gears like on a sportbike; there’s plenty of torque, no matter the gear. I intentionally lugged the bike when I could and came away impressed with the torque nature and the overall power of the ride.

It took a Herculean effort to make the bike stall. I guess that’s the Italian influence coming through.

Slowing back down was just as easy with twin 320mm discs and 4-piston Brembo calipers in the front, and 282mm discs with dual-piston calipers in back, along with ABS control. 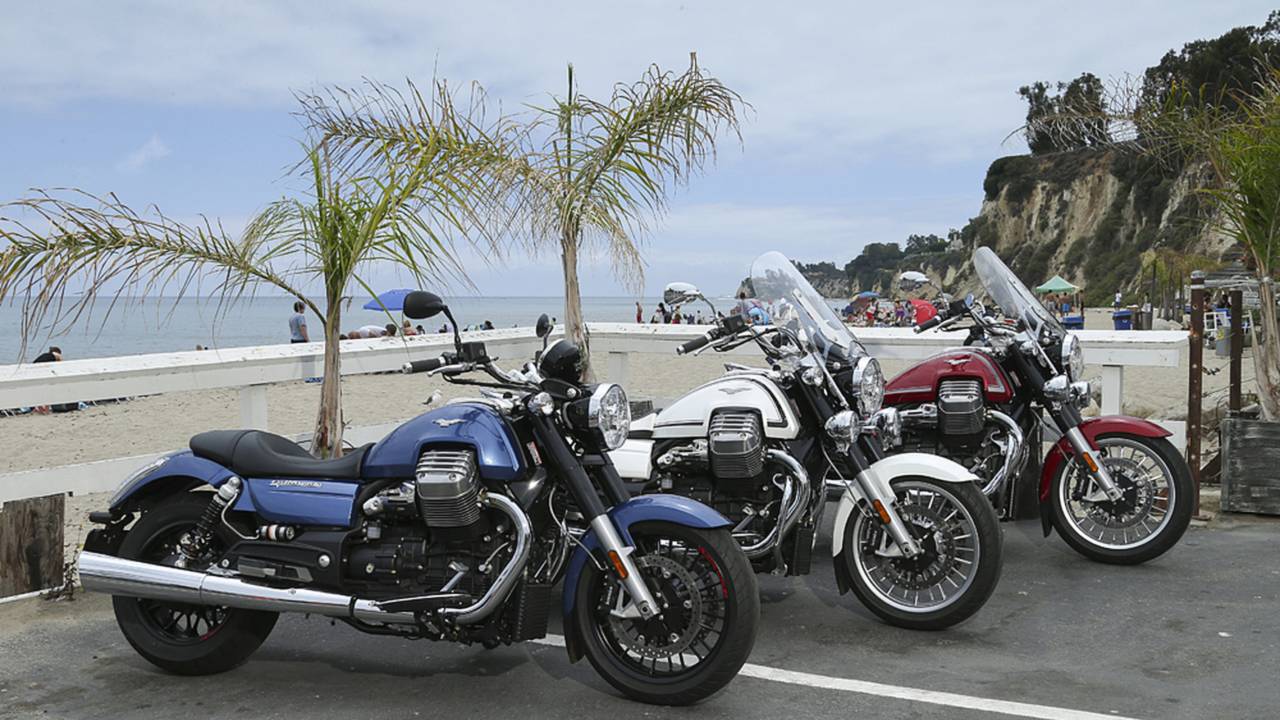 Our riding route for the day went through the Santa Monica Mountains and included the infamous and exceptionally fun “Snake,” an incredibly curvy, immaculately manicured and highly dangerous two-lane that you’ve no doubt seen in nearly every motorcycle print ad or commercial in the last 20 years. It’s not really the ideal venue for a cruiser bike, but it did give us the opportunity to test the California 1400 around both high and low speed curves, learn the lean angle limits and play around with the three different engine maps.

Watch: Luckily Rob never made one of these videos from the Snake.

To be perfectly honest, I only dragged the running boards twice. This one will lay down nearly as far as you’re willing, and the ‘boards are pretty forgiving when they touch the asphalt.

There are three engine map options accessible via the handlebar controls: Turismo, Veloce and Pioggia. That’s Italian for Touring, Sport and Rain. Switching from Turismo to Veloce made a big difference in throttle response and torque (the California is a ride-by-wire bike) and was very useful both while lane-splitting in Los Angeles rush-hour traffic and coming out of corners on the Snake. The California also has an electronic cruise control, but we never had a chance to play with it, thanks to So-Cal’s insane freeway traffic. 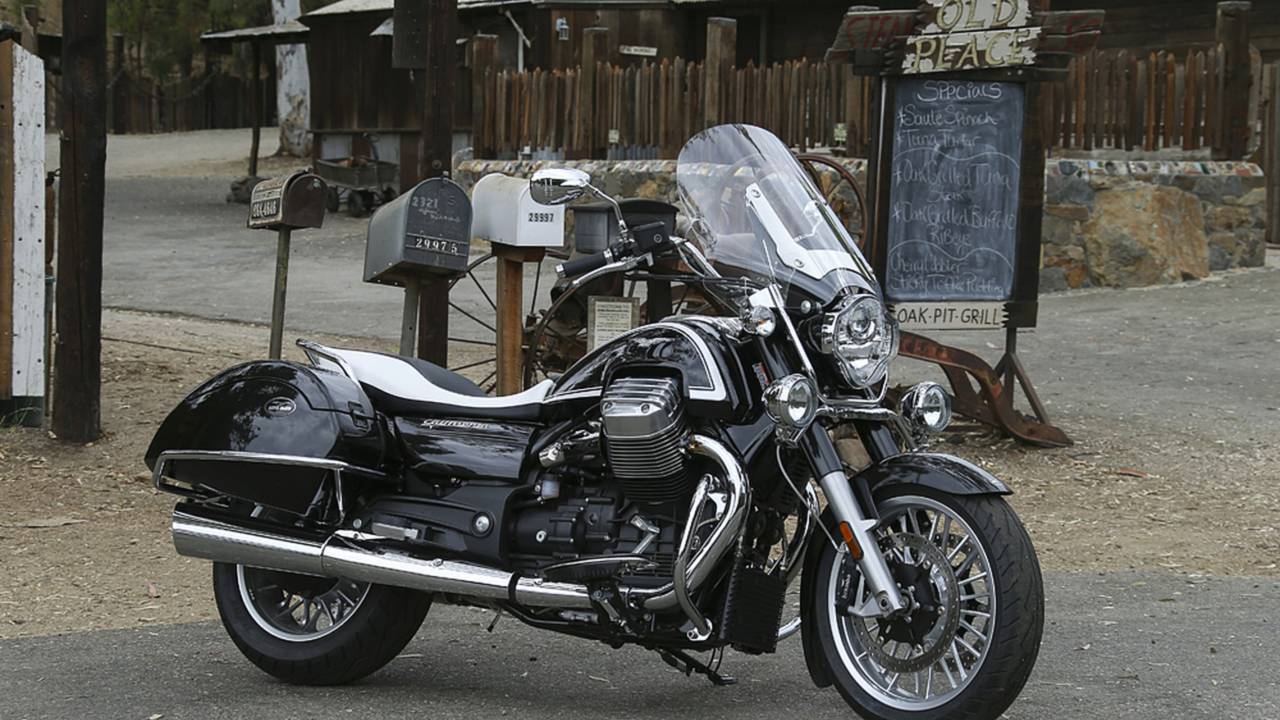 What would I change about the bike? That’s easy—the exhaust is waaaay too quiet. Upon purchasing a California, the very first call would be to an aftermarket exhaust company, since the bike has no sound quality. In order to meet homologation requirements for the market, MG’s designers and engineers were strangled by regulations, and the California is in dire need of a set of pipes.

There are basically no differences between the 2014 and 2015 models, except for the colors. The 2014 Custom was available in Basalt Black and Mercury Grey, and the Touring were available in Ambassador Black and El Dorado White. The ’15 models instead came in grey with Blu Zaffiro on the Custom, and Rosso Amaranto (red with a black seat) on the touring model. Pricing for the new California 1400 is $15,490 for the Custom and $18,490 for the Touring. To be honest, I can’t see the $3,000 price addition and would opt for the Custom. 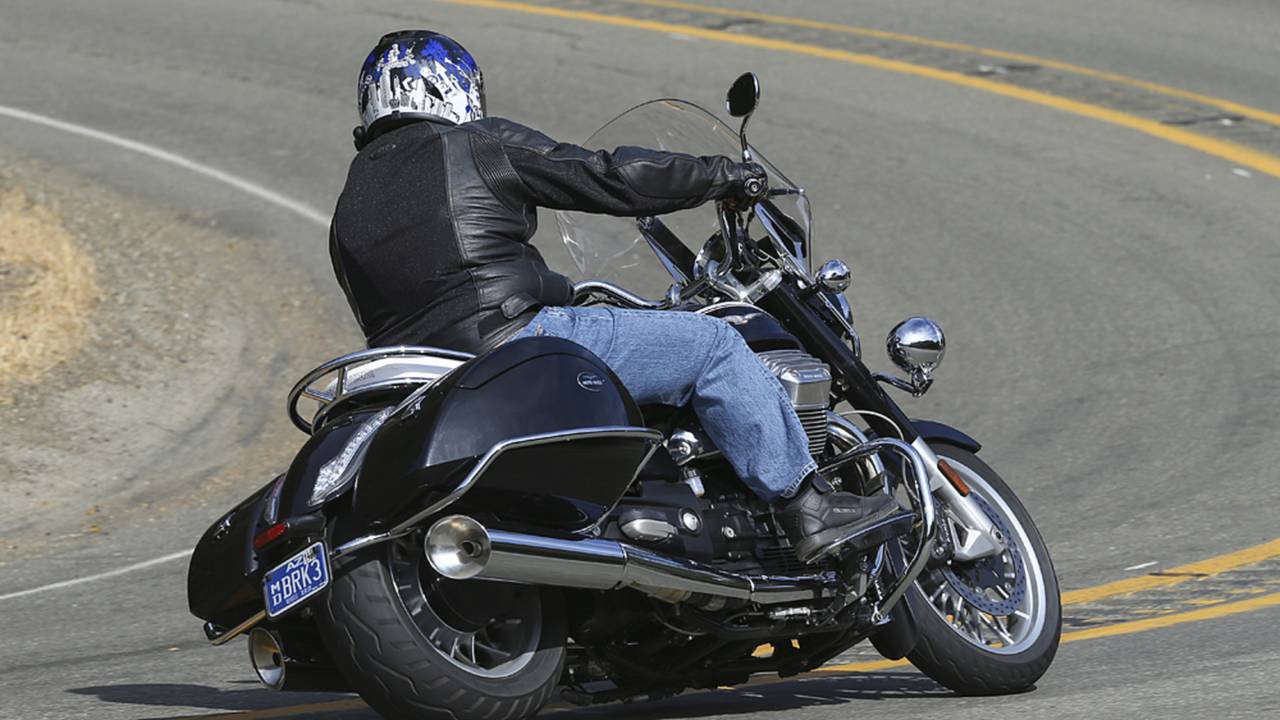 The bikes don’t do anything out of the ordinary compared to other cruisers. However, we rode them around Los Angeles, a town obsessed with appearance, and the Moto Guzzi excelled at that, getting a ton of looks from people that didn’t know what they were seeing. Sportbike and Harley riders did a double-take more times than I could count, trying to figure out what we were on, and even people in rental Camrys stared. Verdict: Hit!

The power: It feels like more than 87 ft-lb of grunt, and runs hard when you go full-twist.

The looks: There’s no mistaking those traditional Guzzi cylinder heads (or rather head covers) sticking up and out of either side of the tank.

The comfort: We rode all day long and not once was the seat or positioning uncomfortable. It could have used some highway pegs though.

The alarm system: I also don't like the requirement to push the little keyfob button in order to start the bike, after you shut it off. That's a pain in the ass.