Vegas to Sturgis - The Hamster Ride 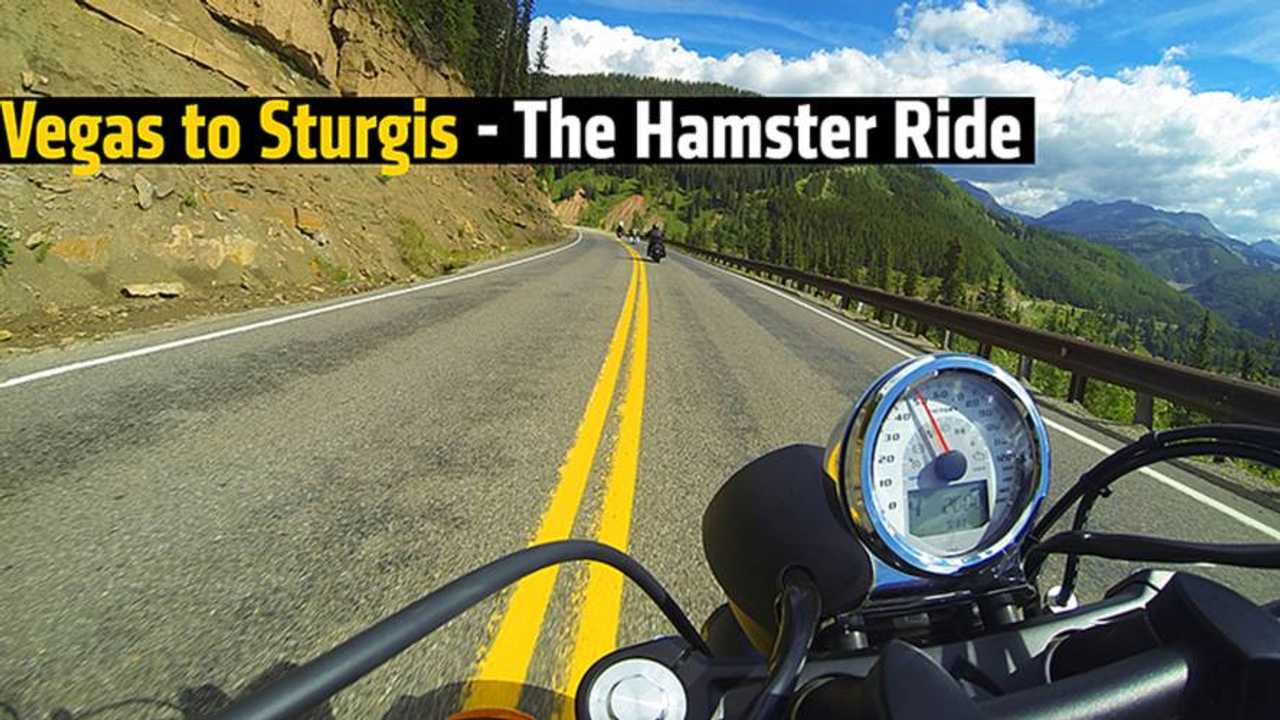 First person recount of riding my bike for the first time on a trip from Vegas to Sturgis, for the Hamster Ride, 2014.

Las Vegas in the summer is really not that bad, well not at 5am... I was grateful that it was only 85 degrees as I waited in my motorcycle leathers for a cab to take me from my sister’s house on the outskirts of Sin City into the Sin itself.

Fully geared-up I was waiting outside of a casino in Las Vegas, en route to pick up my new motorcycle, a 2013 Victory HighBall purchased from Arlen Ness Motorcycle’s in Dublin, California. They were nice enough to ship it to Las Vegas for me. I’m was there to cross one more item off my Bucket List: The Sturgis Run.

Since my childhood, I’ve heard about the motorcycle rally in Sturgis, South Dakota from my uncle “Squirly,” who has participated many times with his extended family. His father-in-law is rumored to have ridden to Sturgis upwards of 35 times or more—I think the actual number has turned into a bit of an Urban Legend… but as a kid busting his teeth on bicycles, it was a dream.

The gaming floor of the Golden Nugget was alive with the usual 6am late-nighters gambling away Junior's college. Surprisingly, Starbucks was crowded, but I didn't really need it as I paced nervously in the lobby, waiting to see my motorcycle for the first time. I’ve never ridden a cruiser or a V-twin or anything of the like. All I’ve ever known were sport bikes, I've owned (beside some dirt bikes that I still own, I've owned a 1996 Kawa Ninja 600, 2007 Yamaha TW200, 2002 Honda CBR600 and 2007 Suzuki GSXR 750 at one time or another). So I was a bit apprehensive as I was about to attempt a 2,200-mile ride with a group of 80-plus seasoned riders on a motorcycle I’d never ridden, let alone seen.

The group of riders, amicably known as the “Hamsters,” began to emerge in two’s and three’s from the elevators of the Golden Nugget into the lobby around 7am; some still groggy, others bright eye’d and bushy tailed. Thankfully, the transporter who hauls all the motorcycles around for the Arlen Ness’ shop was more of the latter. We quickly proceeded to the trailer.

Seeing My Bike for the First Time

The Highball is a visually stimulating bike. She sports fat front and rear white wall tires and sleek naked proportions to give that Bobber look. Powered by a 106 ci 50 degree V-twin and coupled to a 6-speed OD transmission, she easily handles her relatively light 660 lbs (that's light for a cruiser) well.

The same drivetrain is found in most of Victory’s line-up, including their 870-lb touring bike, the Victory Vision. So with the Highball being their lightest model, it’s sufficient to say with 88 hp and 106 ft/lbs the Freedom V-twin does the job. I became spoiled with its passing and overtaking abilities by the end of the trip.

After a few pre-cursory inspections and walk-throughs, I stole away onto the streets of Vegas for a quick familiarization ride before heading off with the group. My first impression was one of smooth linearity from the Freedom V-twin. I expected gobs of low-end torque providing jerky acceleration and chassis undulations; it was anything but. I can only assume that the bike’s composure is due to the PCM’s factory programed Torque Management and Throttle Opening Rate Limits, but its intervention is subtle enough that it can’t be felt.

Apparently, for those wanting livelier, wilder throttle response, a street tuned ECM coupled with a Hot Cam can be your ticket, but why mess with such a good thing? Shifting is seamless; I never seemed to be hunting for gears or fighting for engagement. There’s a clunk for first and second gear engagement that seems archaic, but gave me confidence when accelerating from a stop that the transmission won’t slip into neutral at an unwelcome opportunity.

Riding position is comfortable at city speeds but the lack of windshield and fairings will make you look at baggers and touring bikes differently after the first 500 miles. Controls are intuitive and easy to operate. Ergonomically, the bike is well thought out and makes for a pleasant and welcoming ride.

Turns out that 80-plus riders form too large a group to make it easier on everyone involved, they split off into five to six groups of 10 to 15 riders. The group my uncle rides with is last to rise, last to ride, but oddly enough the first to hit the bars.

After quick introductions, I gathered that either no one had a real name, or their mothers didn’t love them much. Our group consisted of Bandingo (the group blogger), Dante (the pretty boy), J.R. (the mechanic), Squirly (the clown), Wimpy, GoGo Gary, Big John (not to be confused with Lil John), Dug Doug, Ed, Goody, Kevin, Santos, Whiskey and her mate.

By 9:35am our fearless and mostly awake/sober group hit the 15 Eastbound. Confidence was high until we pulled off two exits into the leg. Apparently, we were lost. No worries—the off-ramp we commandeered wasn’t used that early in the morning. On we went to the first planned stop of the day (all of 26 miles away) just outside Boulder, Nevada. We met up at a diner called The Coffee Cup, a place owned by a fellow Hamster. The next stop was Hoover Dam 7.6 miles away, which got me wondering how long it would actually take us to go all 2,200 miles to South Dakota!

The first day of riding took nine hours, covering 250 miles: a promising sign of good things to come. It looked like the High Sierras of Northern California with tall pines, fresh air and clear skies—not dry and arid as I had mistakenly presumed.

The following morning saw an exodus of the majority of the motorcycles groups well before ours even rose. Few of the bikes needed their break-in oil changed out (mine included), so we dropped them off at a Local Victory dealership and went to get breakfast.

The next leg saw us going to Page, Arizona only 130 miles away, but our scenic route more than doubled that to around 300 miles. This leg turned out to be one of the more beautiful ones—it took us through the Grand Canyon National Park. That also meant we would be going through a lot of Indian Country.

But the majestic scenery and beautiful landscape almost made it an afterthought as we stopped time and time again at scenic stops for photo ops or to just admire the view. By the time we left the Grand Canyon National Park, the sun was low in the western sky and we were still a couple hours from Page so we hightailed it out of there with our speedo’s pegged.

The next morning found us all up bright and early, but not on purpose. Everyone was a bit confused about the time zone change and some felt it would not do to break with tradition so instead of leaving at 8:15 we all went back into the hotel for breakfast and rolled out around 9:15.

Only seven miles down the road we stopped. Horseshoe Bend is a beautiful spot on the Colorado River and a stop than all travelers should make should they be riding or driving through. The one and a half mile hike to the scenic lookout spot proved a bit rough on the group of horseless riders, but we all made it with but a few casualties: mostly Bandingo’s skivvies and Dante’s boots.

Day three’s 300-plus mile leg took us from Arizona through Utah to Durango Colorado with a ride through Monument Valley. As fate would have it, the first half of our trek continued in Indian reservation and further tested the willpower of our group. Luckily, Monument Valley proved as breathtaking as beer is refreshing, and it made us forget about our thirst and made for an incredible ride through Arizona and Utah. Happily, at the very moment we left the Indian reservation we came upon the town of Mexican Hat, Utah (really).

The next few stops netted us some pretty epic watering holes and dinner spots and that left us pulling into Durango, Colorado way past what some would consider a decent hour. Luckily, the hotel bar made us forget all that.

9:15 came and as usual, the parking lot was devoid of bikers with the exception of our group. Off we went, in the wrong direction—a sign of things to come.

The second to last leg took us from Durango to Castle Rock, Colorado, journey of 355 miles. Gladly we made it in a little under 450! This leg showed to be a bit of a test of wills as we encountered rain, hail, cross-winds, road debris, idiot drivers and elevation climb of 8,000+ feet. All of it was beautiful and none of it regrettable—except for the idiot driver who I almost rear-ended because apparently a yellow light means “stop” in Colorado.

Our last leg had us going 450 miles from Castle Rock to Spearfish, South Dakota, somehow we all rolled out of bed and left by 9am. Since it was our last leg heading into Wyoming and South Dakota, a lot of the groups were re-joining and riding together, and ours was now up to 24. Mother Nature apparently had enough fun torturing us the day before and left us with blue skies all day, which made for some epic riding through Wyoming and South Dakota.

As we pulled into Spearfish, South Dakota, the sun having decided it could no longer wait for us, sliding beneath the horizon long ago, we were grateful that our trek across the Western United States had been a success: Our larger group managed to pull through with only a few speeding tickets and one stolen bike.

However, one “Hamster” did lose his life in Reno the week prior to our arrival while on his way to Sturgis. His memory weighs heavily on the hearts and minds of his fellow Hamsters and family. And now, onto Sturgis week…

My Victory Highball was turning out to be a great bike—very reliable, comfortable and healthy on the power. But despite taking the abuse of wind while watching fairing baggers ride beside me, the Highball made neigh a complaint nor stutter despite being driven hard in the 100 degree heat of Arizona to the wet lowlands of Colorado and into the freezing hail storms of the High Rockies.

I slowly started to understand how riding naked choppers, sans helmet, cross-country as was the norm 20 to 30 years ago could turn boys into men, and men into bikers. Having to use a factory issued tool kit to help repair a bike on the side of the road as hail taps at the back of your head while adjusting the carburetor screw for elevation change, isn’t for boys or men—only bikers.

I’m glad I can hide behind the creature comforts of injection motors, sealed suspension, drivetrain and electronics. Now about that dang windscreen!