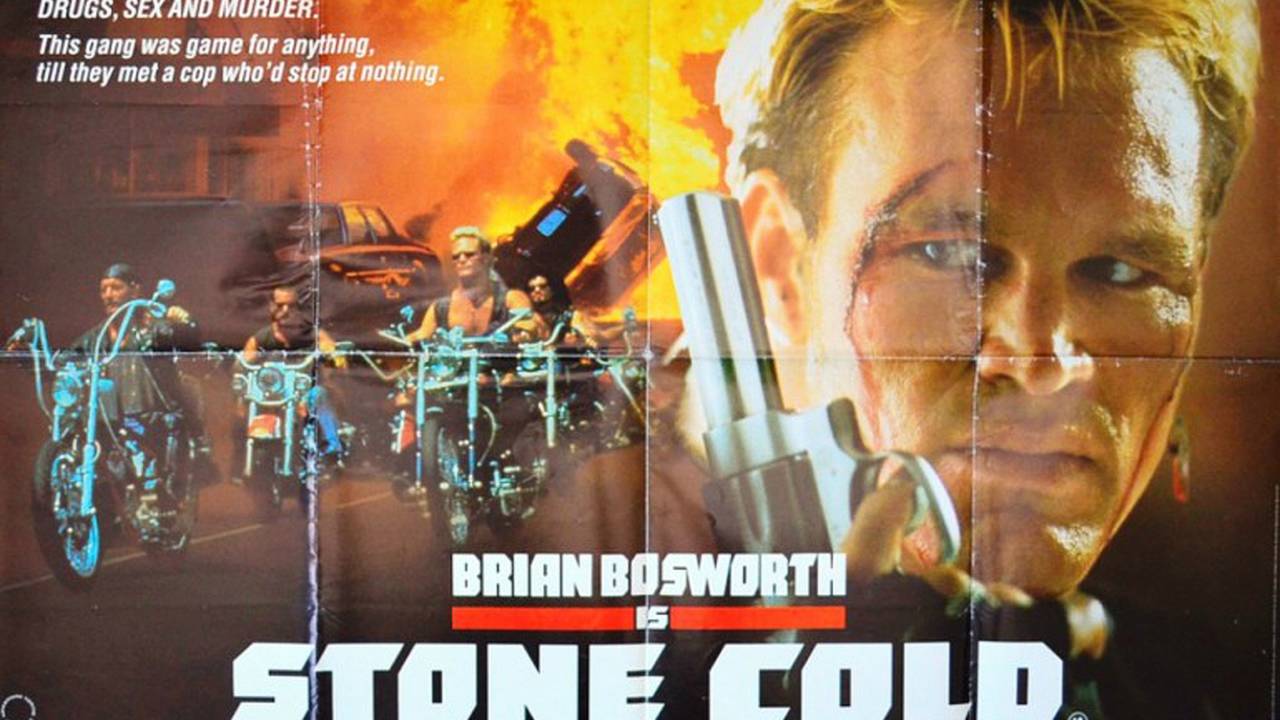 The Boz goes undercover...and does his own riding. This. Is. Stone Cold.

Surely you all remember Stone Cold from the 1990s? It was supposed to launch the action career of retired football star Brian "The Boz" Bosworth, but did not quite get to escape velocity. Surprisingly enough it's not a bad biker movie—though, of course, it's a bad movie—ranking above pretty much all of the 1960-70s B-movie drive-in exploitation films in this genre for entertainment value.

Part of the reason this movie is better than most genre biker movies is the talented cast. The main bad guy "Chains Cooper" is played by Lance Hendriksen, who you all remember as Bishop the android from Aliens or Frank Black from the TV show Millennium, or one of the literally hundreds of other parts he's played, including Abraham Lincoln. "Ice" the second in command of this outlaw gang is played by William Forsythe, who has over 100 cops and crooks to his credit in TV and movies, including John Goodman's partner in crime in Raising Arizona. The love interest is no one you've probably ever heard of (Arabella Holzbog), though she did play Alias' mother in Alias in 2001. Here she plays an ostensibly tough woman, who is really more of a lost little girl looking for a way out. The comic relief, at least the intentional one, is Sam McMurray as the Boz's FBI handler "Lance." He has also been in a ton of stuff, but I'll always remember him as the Corvette driving dentist on Freaks And Geeks.

Another big part of why this movie isn't awful is that it had a pretty damn big budget at the time, I mean just look at this still. This is a real Huey being flown down a main street in a decent sized town in Arkansas or Alabama, which is cheaper than L.A. but still.

Obviously Boz was not an actor when this movie was made (though he has been in a bunch of movies and TV shows since), but he really was a biker. In fact, the Harley-Davidson Super Glide-based custom he rides throughout the movie was actually his. While the initial prep was going on, he didn't feel comfortable on whatever bike the art department had for him, so he insisted on using his own. That's probably why all the riding scenes seem real, and not like an actor sitting on a bike that's sitting on a trailer as it's towed through town.

The movie starts with Joe Huff, which is Boz's character's real name, foiling a holdup at the local grocery store. Of course, it's in a totally kick ass action movie way, complete with one liners and guys getting thrown into stacks of cans. But since he's already on suspension (I suspect he ran afoul of the fashion police, or possibly the fish and wildlife division), even quips like "you got a cleanup on aisle four" can't get him on the good side of his wrongheaded commanding officer.

As luck would have it, the FBI is looking for a badass to go undercover in a white supremacist motorcycle gang that's running drugs and guns, and may have killed a priest for some reason. Joe Huff hops on his bike and becomes John Stone, and Stone Cold hits high gear, saving us from a movie that would be called Left in a Huff. It proceeds with lots of bikes, lots of guns, some drag racing, and a bit too much shirtless dude-on-dude wrestling, but eventually, Boz wins their confidence and becomes part of the gang. Then it starts to get very complicated, as it turns out Chains and the other bikers are actually being hunted by South American drug cartels, Italian mobsters, the FBI, and more whom I've lost track off.

There's a good motorcycle vs. motorcycle chase scene, after which you'll be left wondering how anyone can ride a Harley that fast through a downtown area and fire an Uzi at the same time. It's seriously not a bad chase scene as things go, with Boz doing a lot of his own riding (because how much is an ex-NFL player worth anyway?), and the bikes going pretty fast, especially for raked-out Harleys. If you just want to watch that, jump to about 53 minutes into the movie. It ends with a totally improbable explosion at about 56 minutes.

The climax of the film involves a huge plot to break out a member of the gang who is currently on trial. This involves taking an entire courthouse hostage, and flying a Huey down main street. The last 30 minutes of the movie seem to be from an entirely different film, which they kind of are, since this movie took 20 weeks and two different directors to finish. The saving grace is that it appears the production actually did ride Harleys all over the marble floors of some poor city's court house. Take that, the Man!

Rotten Tomato Rating: 29% (but that is based on just 7 reviews)

RideApart Worth Watching: Yes, on a rainy day

Redeeming Quality: The bikes and the riding. Unlike a lot of genre films, this one seems to use real riders and their real bikes. You aren't going to see Henry Winkler barely able to keep an old Triumph upright at the malt shop here.

It also features an original song by the Doobie Brothers.

Worth Noting: This movie would make a great double feature with the 1974 Australian movie Stone, which us also about a cop who infiltrates a biker gang, but otherwise completely different...

Much like my last movie review, this one is available many different places, including for free in its entirety on YouTube right here: