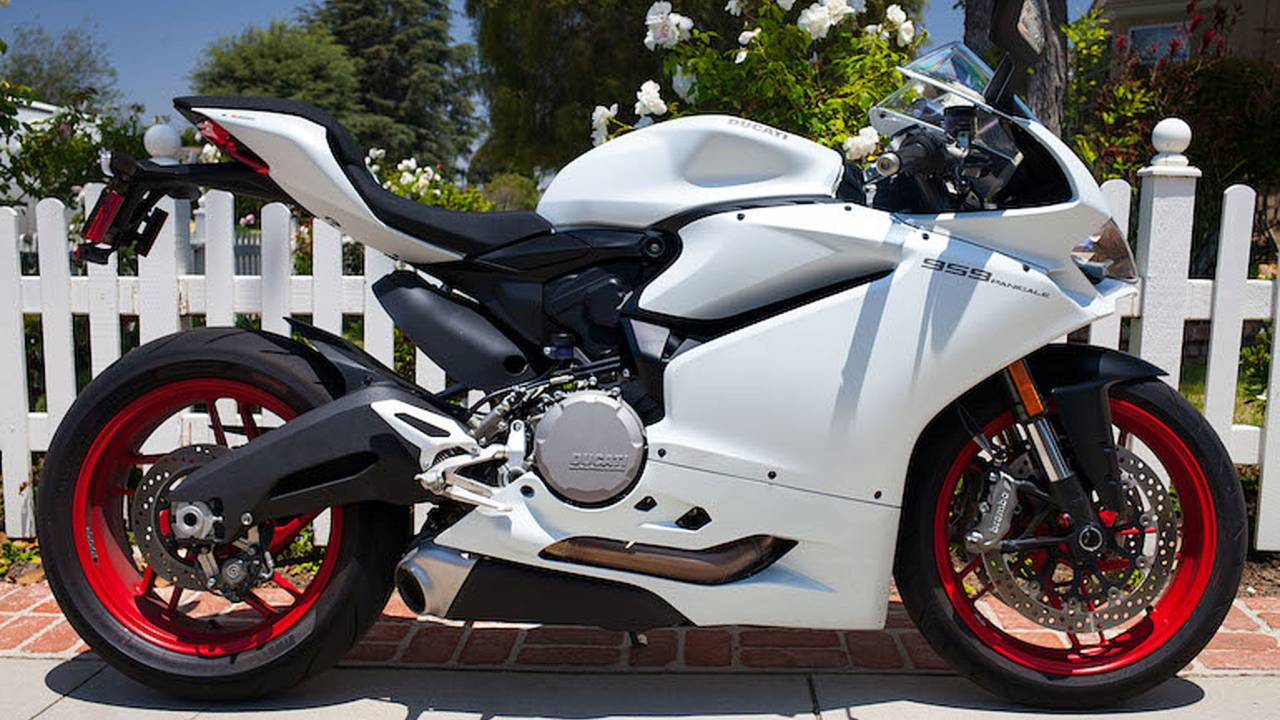 A full-on middleweight sportbike dialed for street use, the 2016 Ducati 959 Panigale holds its own as the “entry-level” model on Ducati’s sportbike lineup.

Hopping on and riding the all-new 2016 Ducati 959 Panigale around the block offers few surprises if one is familiar with Ducati’s sportbike fleet of recent years. As is true with the first glace of the bike, the 959 could easily be mistaken for the 899 predecessor or the 1299 S big brother. Since its 2012 introduction, the Panigale line-up has remained rather uniform regardless of engine size or trim level, and we aren’t complaining. The 959 Panigale is the “base” model of the Panigale fleet but on all basic levels, rides very similarly to even the top-of-the-line Panigale R WSBK racing homologation model.

The bike feels very light and thin when throwing a leg over. This feel remains consistent while riding around town, cruising down the freeway and flicking through the canyons. The chassis, suspension, brakes and motor are all extremely well-balanced and the tuning of the electronics package has been perfected for comfortable yet capable street use. Despite the stereotypes of V-twin engines (especially those with “DUCATI” on the case cover), the motor is smooth throughout the rev range, not uncomfortably torquey, and mated to an excellent transmission.

This 959 Panigale package makes for a great sportbike, benefiting from current technologies and fine-tuned electronics that help adapt the bike for everyday street riding. The result is something that riders accustomed to older Ducati sportbikes (even those from 10 years ago) would find surprising.

Ducati’s new 959 Panigale is powered by a “Superquadro” 955cc (despite the model name, a trend we’re noticing lately) 90-degree L-twin motor with a chain-driven desmodromic cam and valve train (a set up similar to the Ducati Monster 1200 R).

The motor is “oversquare” with a 100/61mm bore/stroke enabling high revs and smoother operation. At the same time, this moves peak power and torque delivery up to 157 hp at 10,500 rpm and 79 lbs.-ft. at 9,000 rpm respectively, making the powerband feel more like that of a traditional inline-four rather than a typical V-twin. On the plus side, managing the power delivery is much easier and feels more refined on the street while making power on the track like the rest of the middleweight 600cc four-cylinders. However, the torquey low-end power curve that Ducati is known for is lost, something riders might expect and hope to enjoy when shopping the brand.

Despite its impressive numbers, the bike feels as if it’s underpowered. Perhaps the engine, ECU, and electronic throttle are tuned TOO well –– delivering power too linearly with too many of the edges ironed out resulting in a numb sensation even when ridden hard. Only when winding the engine out at the top of the rev range are these power figures felt from the seat. This may be a benefit produced by precision engineering, but it is not a sensation one expects from a Ducati.

The wickedly-loud exhaust note of the US-spec 959 on the other hand, is exactly what one expects from a Ducati. The Euro version that must comply with the increasingly-strict Euro emission standards (current level III, pending level IV with rumored byproducts such as the rumored loss of the Honda CBR600RR) is choked by an exhaust system that looks as lame as it sounds. Out  in the good ol’ US of A, though, the Ducati bark rings true. Even at idle, the stock exhaust system is loud enough to induce street-side morning startups in an attempt to not wake the neighborhood firing up the 959 in the garage or driveway.

The six-speed transmission of the 959 Panigale paired to this motor, is also not up for debate. Unlike the heavy-duty but clunky gearbox on the Monster 1200 R, shifts on the 959 Panigale are extremely smooth, precise and effortless as the rider goes up or down through the gearbox. Gear changes are executed from just about any boot angle on the shifter with a light tap. Shifts are just as easy putt-putting through the neighborhood as they are hammering through the canyons. Zero false neutrals were encountered during our time with the bike and true neutral is found without any thought. Even the hydraulic slipper clutch operation is lightweight with plenty of feel. Ducati is approaching Honda territory with this 959 transmission operation.

Ducati has finally been moving away from its trademark tubular trellis frame designs for its sportbikes and adapting the more modern and capable cast aluminum technology that other manufacturers have been finding success with for decades. Additionally, utilizing the extremities of motor and gearbox as stress members of the overall vehicle chassis is a strategy Ducati has been implementing lately as well. The L-twin motor is positioned with the forward cylinder angled 21 degrees above the vehicle’s horizontal plane to optimize the balance of the chassis. The 959 Panigale incorporates these technologies into a package that is 430 lbs. wet, producing a very planted ride.

Though the 959 Panigale does not have any of the high-end Ohlins suspension components, the stock package is much more capable than anticipated. 43mm Showa BPF forks similar to those utilized by the majority of Japan’s big four sportbike makers perform exceedingly-well on the Panigale chassis paired with the Sachs rear shock. Plenty of front end feel, stable cornering and extremely planted corner exits were experienced by this 165lbs. rider with minimal setting adjustments. This surprisingly high level of capability was not expected from this “base model” Panigale and would definitely give the Ohlins gear on the premium models a run for its money.

Braking is handled by Brembo components including 320mm front discs and Monobloc M4.32 calipers. Ducati has been serious about its braking systems for years and the Panigale is no different. Speed is shed in a hurry through light pressure on the lever, which also provides plenty feedback.

The complete package results in a very well-handling motorcycle. The bike feels light and solid regardless of speed, turns into corners predictably then picks up with ease, and holds its line without getting out of shape whether hard on the brakes entering a turn or hard on the throttle exiting.

The electronic technology package is where the 959 Panigale lacks. This is where it is most apparent that the 959 is the “base” model of the Panigale line. Beautiful UI/UX systems and advanced rider aid controls must rack up the COGS on the manufacturer’s BOM because this is apparently where Ducati was forced to scale back in order to meet the sub-$15k price point.

The “full LCD” display on the 959 Panigale is not much more than the typical sportbike instrument cluster of over a decade ago. Though, quite a bit of information is displayed and the menus run deep with adjustability. However, said menus are clumsy to cycle through.

Once acquainted with the user interface, useful systems such as three levels of power delivery, eight-level Traction Control (DTC), three-level Bosch 9MP ABS, three-level Engine Braking Control (EBC) and binary Quick Shifting (DQS) can all be modified. The three default riding modes are “Race”, “Sport” and “Wet,” with each of the previous measures preset. But the user can edit and save each of these settings to personal preference.

The majority of the systems work just as intended and make up a solid “base” electronics package without any bells and whistles –– nothing to get too excited about. The TC setting 1 (least intrusive aside from Off) held the chassis well-planted while still laying down darkies exiting corners, WOT.

Ducati warns that the ABS level 1 in “Race” mode does not interfere with the rear wheel, which was unintentionally verified on a few occasions under especially hard braking.The quick shifter interacts very well with the smooth transmission and is dialed in just right for street/casual use, but does lag a bit and numbs power delivery between shifts during hard/track riding. The EBC system seemed very gimmicky without much noticeable difference throughout the setting range. This system could be left out of the package in order to bring costs down even further.

One interesting system bundled into the 959 Panigale is the “Decompressor” engine starting aid. This system modifies cam lift during engine startup in order to keep valves slightly open, reducing combustion chamber compression. This reduces load on the starter motor and battery, in turn reducing the required size of each. This results in an impressive 7.3lbs vehicle mass savings. However, it must be noted that on one occasion, the engine flooded and took several minutes to finally fire up under a cold-start condition. The root cause of this fault was not determined, but it’s hard to ignore the possibility of this decompressor system acting as a contributing factor.

As with all Panigales, the riding position of the 959 is very aggressive. Some have complained over the years about the cramped Panigale cockpit, but the 959 riding position is no worse than any other true sportbike on the market. The rider is put into the ideal riding position to easily maneuver the bike. The ergos on the 959 feel just right when the bike is being ridden aggressively, yet not overly uncomfortable when commuting.

The main problem with the comfort level of the 959 Panigale is the extremely hot saddle due to exhaust pipe routing right under the seat. The seating area heats up within minutes of riding and becomes extremely uncomfortable regardless of engine or ambient air temperature. The seat felt just as hot on a 60F night with 160F engine temp riding down the highway at 80 mph as it did on a 90F day with the engine at 212F while stopped in traffic. This has been a problem since the launch of the first Panigale almost five years ago. Ducati has implemented minor countermeasures to combat the issue but it is surprising that this hasn’t been completely engineered out by now.

Another ergo annoyance (more on the minor end of the spectrum) is the kickstand positioning and operation. When retracted, it is very difficult to get a boot to grab hold of the stand to swing down for parking. The sweet spot where the boot must wedge underneath the footpeg between the stand and lower portion of the frame is very narrow. Fumbling with this most basic of motorcycle operations is not a good look for riders on a bike with a reputation as premium as Ducati and with aesthetics as aggressive as the Panigale.

The price of admission to the Panigale club is $14,999 for the 959 model. This is a $5,000 savings over the 1299 big brother, $10k cheaper than the 1299 S and less than half the price of a Panigale R. In Ducati terms, the 959 Panigale is an excellent value for such a capable sportbike. However, other middleweight sportbikes with decent electronics packages but far weaker powerplants, such as the Kawasaki Ninja ZX-6R ABS or Triumph Daytona 675R, are priced lower –– $12,699 and $13,999 respectively.

Ducati’s middleweight, entry-level Panigale is just what one would expect from the brand. The 959 Panigale has a solid chassis, excellent brakes and a suspension setup that performs on par with some of the top racing packages on the market. The motor has an impressive spec sheet but makes power like a Japanese 600 reducing the shock value. The electronics package is bare-bones but does the job. The transmission feels perfectly dialed for street use. Finally, as always, the Ducati craftsmanship and aesthetics of the 959 Panigale are tough to ignore.

The 959 Panigale is an excellent representation of Ducati sportbikes with a great balance of performance technology and streetable capability.