Affordable twin is perfect for city and back road fun.

If I’m honest with myself, I was pretty skeptical of the Triumph Street Scrambler when it was first unveiled at EICMA 2016. My impression of it was that it was a cash-in bike; that Triumph had simply thrown it together to cash in on the scrambler craze (that, arguably, it had created years before). 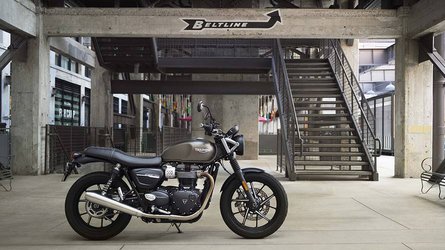 If I’m even more honest with myself, I felt the same sort of thing when I first saw the Triumph Street Cup and the Triumph Bonneville Bobber. I was utterly wrong about those—they’re super-mega awesome. So, wanna guess whether Triumph scored a hat trick with the Street Scrambler?

Spoiler alert: of course it did. 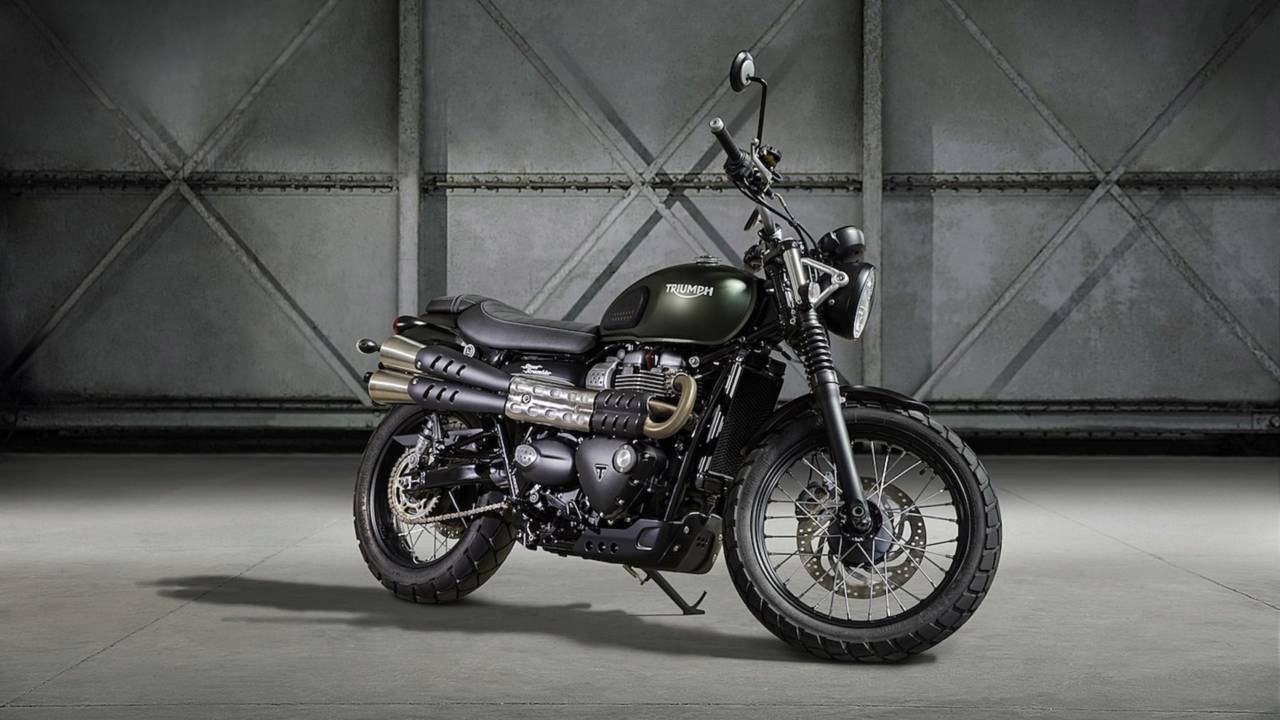 Earlier this year Triumph brought me up to Ystradgynlais, Wales, to crash the Street Scrambler into trees as part of the manufacturer’s newly established Triumph Adventure Riding Experience. Well, I don’t think they actually intended for me to crash it into trees, but that’s what I did. Over and over. Big trees, small trees, shrubs, and a few rocks. The fact that it put up with the abuse (by and large—though, I did manage to misalign the headstock so that when I was pointing the ‘bars straight the bike was actually veering left) left a good impression on me.

A short while later, I got in touch with my pals at Bevan Triumph (my local dealership) to ask if I could spend a day with a Street Scrambler to get a sense of its on-road chops. This time, I didn’t run it into anything.

Regardless of its “off-road-inspired” styling and Triumph’s sudden desire to shoehorn the model into its adventure segment (at least until the company can finish working on a proper scrambler) the Street Scrambler’s ideal environment is the urban jungle. Powered by the same 900cc liquid-cooled parallel twin engine that drives the Street Twin, Street Cup, and Bonneville T100, the Street Scrambler has been tuned to deliver torque low in the rev range, which makes it the ideal weapon for leaping away from stop lights. 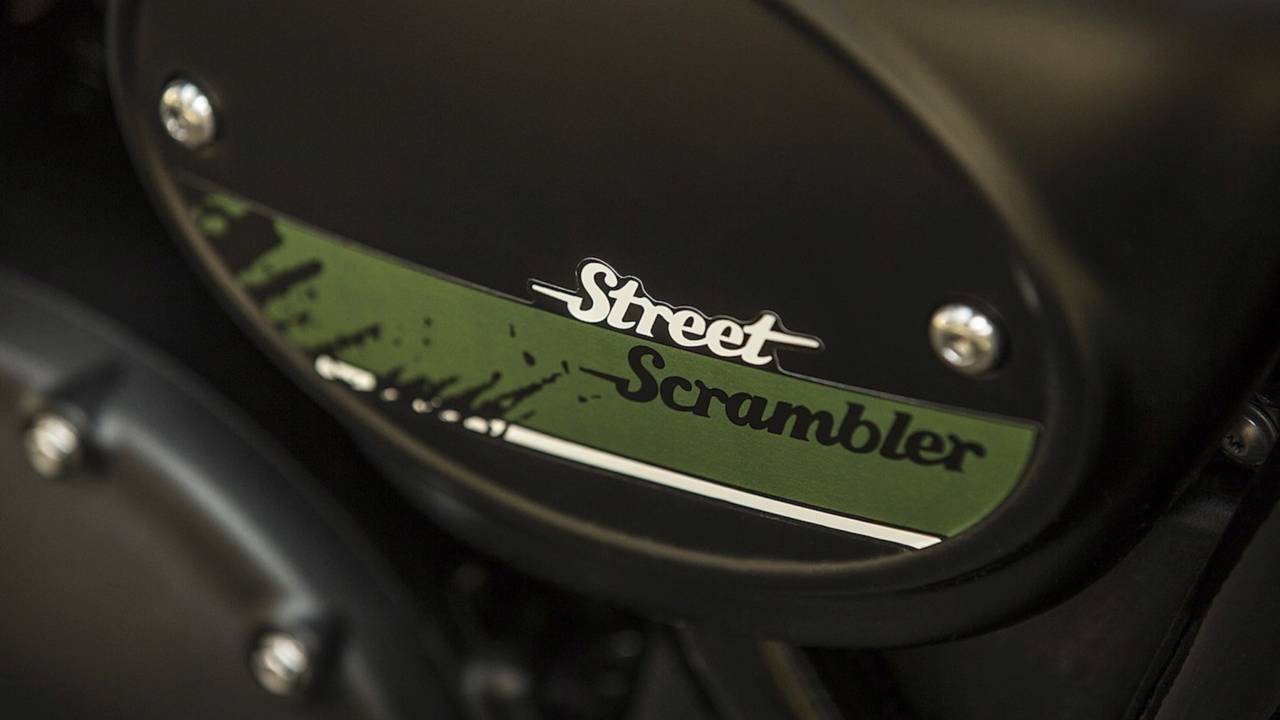 For the most part, the Street Cup is a high-quality machine. But every once in a while you can see where Triumph saved cash. Like with this sticker.

The bike feels lighter than it is, which means its weight is in the right place. A relatively low 31.1 inch seat height assists in that feeling. A 6-foot-1 dude like me can easily place both feet flat on the ground. Though, those high pipes stick out a bit on the right side and may obstruct the stance of folks who are a little shorter of leg.

Wide ‘bars make for easy maneuvering and there’s a healthy amount of steering lock to allow you to wiggle through traffic. The clutch is a little off-on for my liking but otherwise low-speed work requires minimal effort thanks to a well-balanced chassis. ABS and traction control come standard, which means the Street Scrambler is pretty well equipped to handle rain-slicked city streets. Though, for pure inner-city use a rider may want to swap out the standard Metzeler Tourance tires for something a little more fit for purpose.

High-speed roads are where the Street Scrambler is least appealing. That has nothing to do with the bike’s low-on-paper 54 hp, which I felt was plenty when sitting astride the same engine in its Bonneville T100 and Street Cup manifestations. Instead, I think the culprits here are the bike’s high-torque tuning and scrambler ergonomics. 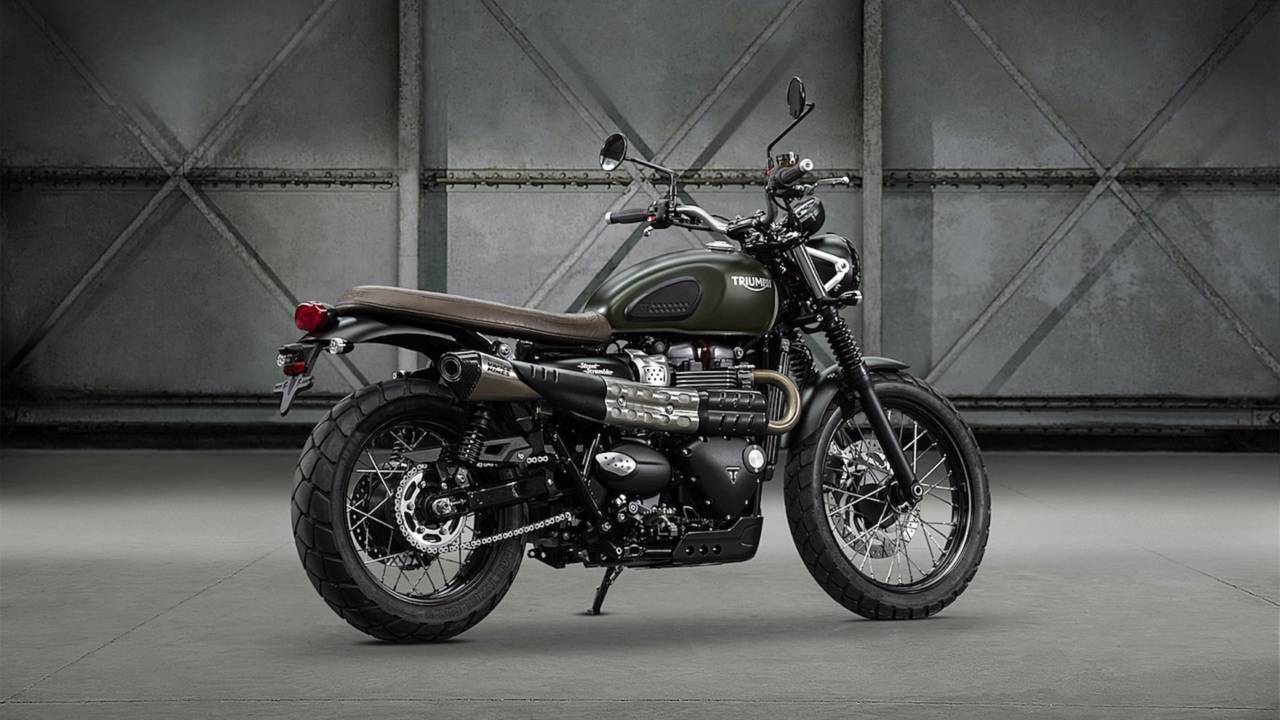 It may not look it, but the seat is pretty comfortable.

Buzzy and seemingly beginning to run out of puff above 70 miles per hour, the Street Scrambler isn’t the ideal choice for those looking to spend long hours on the motorway. In fairness to the bike, it doesn’t actually get wheezy until you push into lose-your-license speeds, but there’s something about the bike’s performance that feels unwilling. Whereas you don’t really mind the 5-speed transmission on a Bonneville T100, you really long for sixth gear with the Street Scrambler.

But that’s fine, because the wide ‘bars and upright seating that make the bike ideal for urban riding mean you’ll turn into a sail above 60 mph, anyway. There’s something deeply charming about the idea of loading this bike up with camping gear and Kriega bags and setting out across the country or continent on a Street Scrambler. Certainly the bike has the durability and reliability to pull off such a feat. But you’ll want to stay off the fast highways for comfort’s sake.

Whereas highway riding is underwhelming, all is forgiven when the road gets a little narrower and more interesting. Take this bike onto a bouncing country lane and you will get all school-girl giggly about the thing, shouting aloud: “Oh my gosh, I love this motorcycle!” 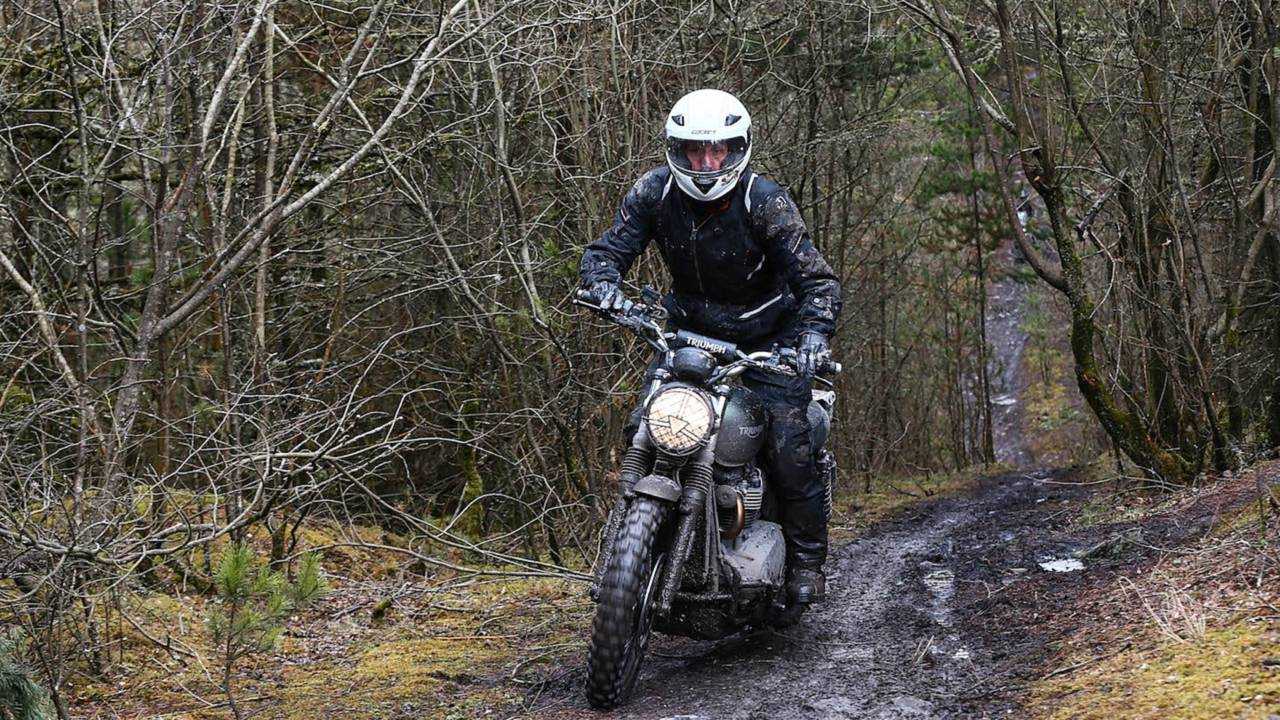 The bike is a bit smallish for a 6-foot-1 rider, but funnish, too.

I took the bike along the rabbit warren of crumbling, hedge-row-lined roads that run along the southern Wales coast and had so much fun that I lost track of time. The guys at Bevan had to give me a polite phone call to remind me that, you know, the bike didn’t belong to me and I had promised to bring it back before the end of the day.

Thrilling at the torque of the engine, easily dodging big potholes and deliberately aiming for a few of the small ones, you get lost in a motorcycling experience the retains Triumph’s trademark refinement while also capturing the best aspects of a more raw, old-school machine. The exhaust is Euro 4-compliant, which means it won’t upset grandma, but still manages to offer up a great snarl.

The pipes look cool, and sound good, too. And, in case you’re wondering, on the two different occasions I rode the Street Scrambler I did not experience excessive heat on my leg. 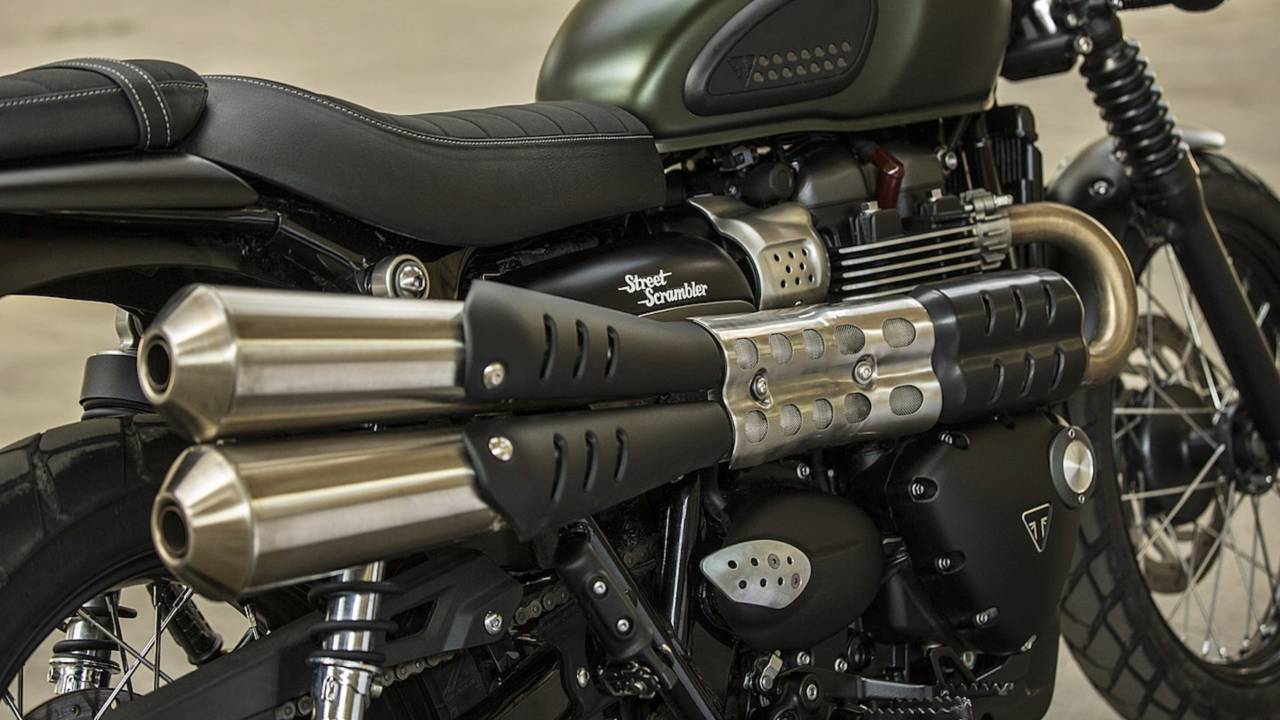 This is not a cash-in bike; this is a moto that people put time and effort and love into. And riding this thing down a (reasonably smooth) dirt farm road, by the way = all the funz. If you want to take the bike on anything more exotic, however, you’ll probably want to invest in a more off-road appropriate suspension. The Street Scrambler has the word “street” in its name for a reason.

Additionally, those taking a Street Scrambler farther down the road less traveled may find its switchable ABS and traction control systems to be annoying. They reset to being active every time you cut the engine—whether by key or kill switch or stall—and scrolling through the options menu requires pressing a a single button several times. Accidentally scroll past your intended option and you have to go through the entire menu again.

Triumph claim the Street Scrambler manages a whopping 74 miles per gallon, which helps mitigate the smallness of its 3.1 gallon tank. Doing some fuzzy math, I come up with just shy of 200 miles per fill up, which is about all my Tiger Explorer XRX can manage on a 5.3 gallon tank. 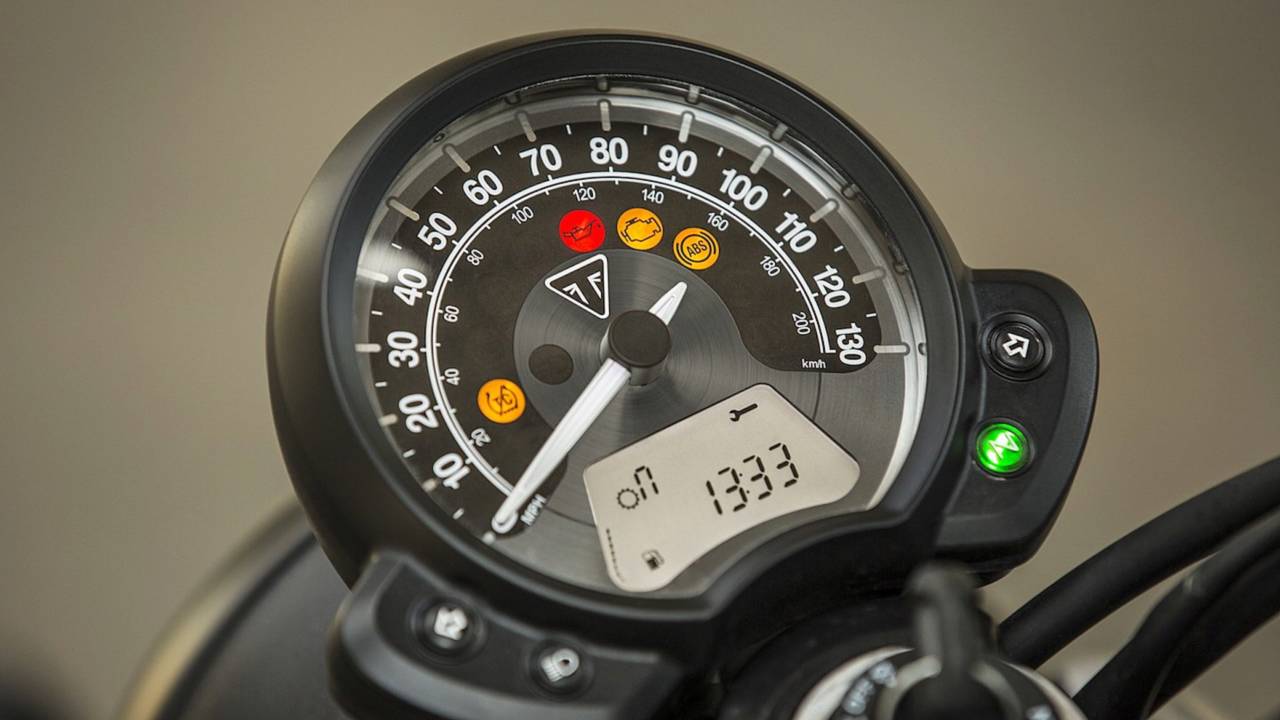 The bike's clock is uncomplicated but offers you all the info you need.

Meanwhile, the ABS and traction control that come standard with the Street Scrambler help to ensure its usefulness in all on-road situations. You also get a USB port (under the seat) with which you can charge electronics. Though, I have an issue with the port: there’s not any particularly good place to store said electronic devices. You’ll need to either run a wire into your jacket/backpack or buy some kind of tiny underseat bag. Or, perhaps, a tail pack. The passenger seat is removable (it’s not a one-piece seat like the Bonneville T100), thereby making room for a luggage rack instead.

With Triumph’s reliability and improved build quality (though, keep it doused in lubricant, just in case) the Street Scrambler would make a brilliant and stylish commuter, assuming you don’t have to clock up too many motorway miles. As with all Triumphs these days, the maintenance schedule is pretty relaxed, with 10,000 miles between the times that damned little wrench graphic shows up on the dash. 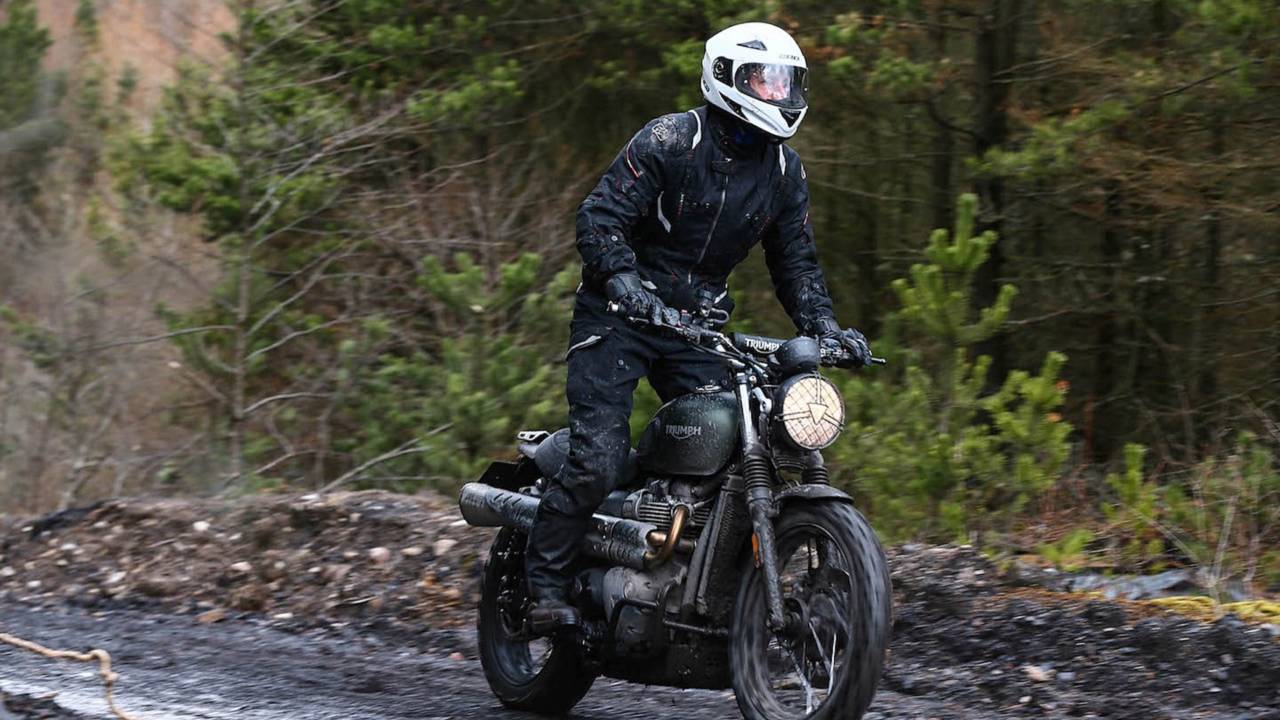 I need to work on looking more badass when riding off road.

The Street Scrambler is a fantastically fun moto if you accept it for what it is—an affordable street-focused machine—and still pretty damn enjoyable even when you force it to be what it isn’t. Investing in new suspension would make it a tractable light off-road machine, though I suspect most folks will be happy to keep this Street bike on the street. 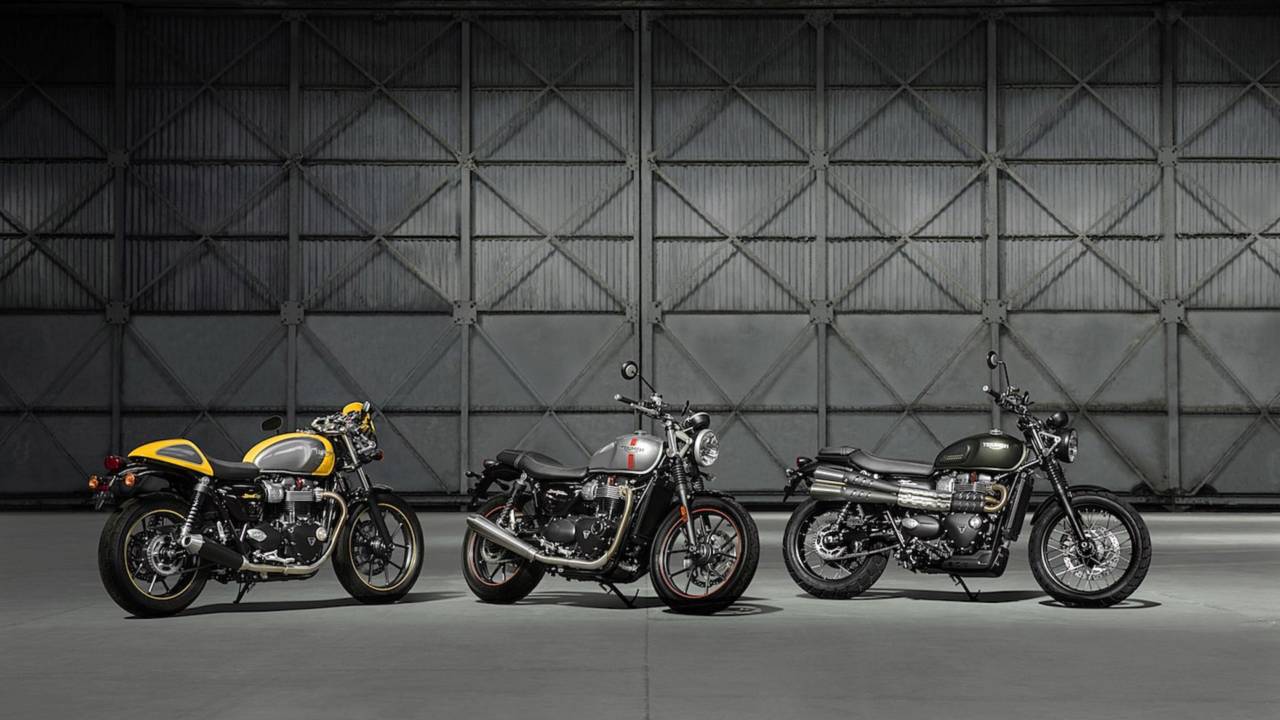 Out at the Triumph Adventure Riding Experience, I found tremendous joy when speeding along dirt roads astride this thing. And whereas my own bike (the aforementioned Tiger Explorer) is too big and too powerful to allow me to really feel as carefree in such conditions, on country lanes the Street Scrambler is one of the most grin-inducing bikes I’ve ever ridden.

Build: Still lanky after all these years 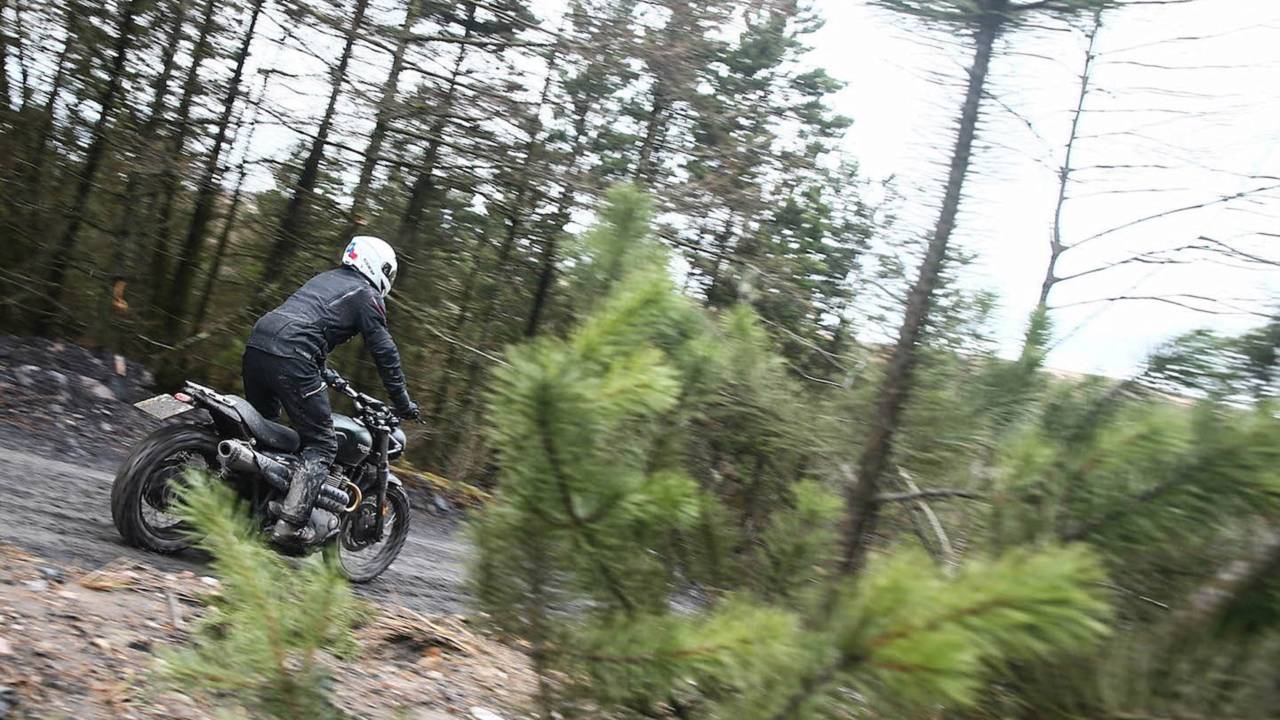 One of the rare times I was not crashing the Street Scrambler into a tree.