He fought on long after a career-ending crash.

The 1980s gave rise to a growing contingent of German 250cc Grand Prix motorcycle racers including Martin Wimmer, Helmut Bradl, Manfred Herweh, Peter Öttl, and five-time champion (250cc and 350cc) Anton Mang. One compatriot that challenged Mang’s dominance was Reinhold Roth. After running a few races for Yamaha in the 1979, 1980, and 1982 seasons, Roth earned a 250cc seat with Iwata in 1983.

He steadily climbed the rider’s standings before landing at HB-Honda in 1986. The following year, Roth showed his true potential when he won the French Grand Prix and finished as vice champion behind countryman Anton Mang. In 1989, Roth won at Dutch and Czechoslovakian Grands Prix as well. Ever the bridesmaid though, Roth finished the season as runner-up to Spanish rider Sito Pons. 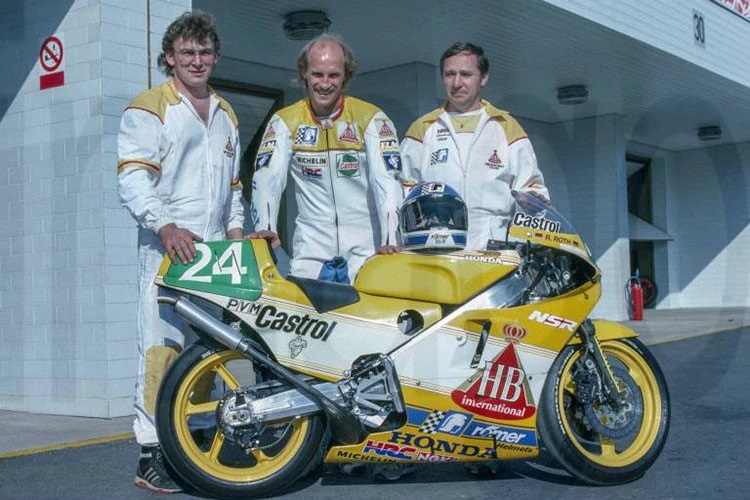 At the age of 37, Roth achieved 3 wins, 15 podiums, 2 pole positions, and 3 fastest laps. As he set out for another run at the 250cc championship in 1990, his career was tragically cut short by a crash at the Grand Prix of Yugoslavia on June 17, 1990. During the race, rain prompted race directors to stop the competition. Unfortunately, the marshals didn’t display the flags in time for the leading group. As a result, Australian rider Darren Milner, who replaced an injured rider, was preparing to exit the track.

As the leading group approach Milner, Roth’s view of the exiting rider was blocked by two rivals. Without enough time for evasive maneuvers, Roth slammed into the back of Milner’s Yamaha at 110 mph. Officials transferred Roth to a nearby hospital following the crash, but he suffered a traumatic brain injury and remained in a coma for six weeks. When Roth emerged from the coma, he was severely impaired, only learning to speak again seven years later.

Roth’s wife Elfried, extended family, and a team of nurses cared for the racer for 31 years after the career-ending crash. Sadly, Roth died of multiple organ failures at the age of 68 on October 15, 2021. Due to the untimely incident, we will never know the true potential of Reinhold Roth’s racing career, but we do know that he was one of the fiercest fighters on and off track.