The Moto Guzzi 1100 Sport was a big departure from the retro-styled bikes we’re used to seeing from the Mandello Del Lario brand. Introduced in 1995 and discontinued in 2000, the sporty Goose stood out from the flock thanks to WP suspension, Brembo brakes, Marchesini alloy wheels, and sticky Pirelli rubber.

The model may have been a modern iteration for Moto Guzzi, but Foundry Motorcycles’ Tom Simpson intended to take a 1996 1100 Sport back to the brand’s café racer roots. Instead, at the request of a customer, the West Sussex-based custom shop turned the V-twin sportbike into something even less common of Moto Guzzi’s lineup: a street tracker.

After stripping the 1100 Sport of its bodywork, Simpson retrofitted a Kawasaki H1 gas tank to achieve a vintage scrambler look. A leather bench seat adds to the retro aesthetic, but the complex exhaust system steals the show. If the custom shop’s name isn't enough indication, Foundry Motorcycles’ Tom Simpson is a former blacksmith. He fully utilized those skills by casting parts of the exhaust system from old Moto Guzzi engine blocks.

The two-into-two exhaust system snakes from the transverse V-twin's forward-facing exhaust port back under the intake manifold and terminates under the new seat. While the mazelike pipes draw the eye, the finned exhaust can and underseat embellishments truly display Simpson’s masterful metalwork. Foundry not only tucked a taillight behind that grated tail unit but also cast an aluminum headlight bucket up front.

Yes, the 1100 Sport may have been a major departure from Moto Guzzi’s run-of-the-mill offerings, but Foundry Motorcycles took the quirkiness to an even greater level with its street tracker project. 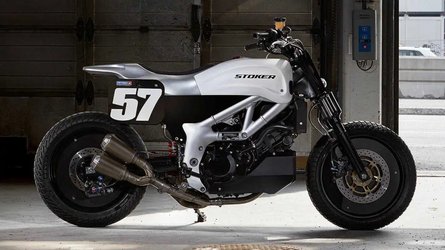