Riding Dirty: A Little Help From My Friends 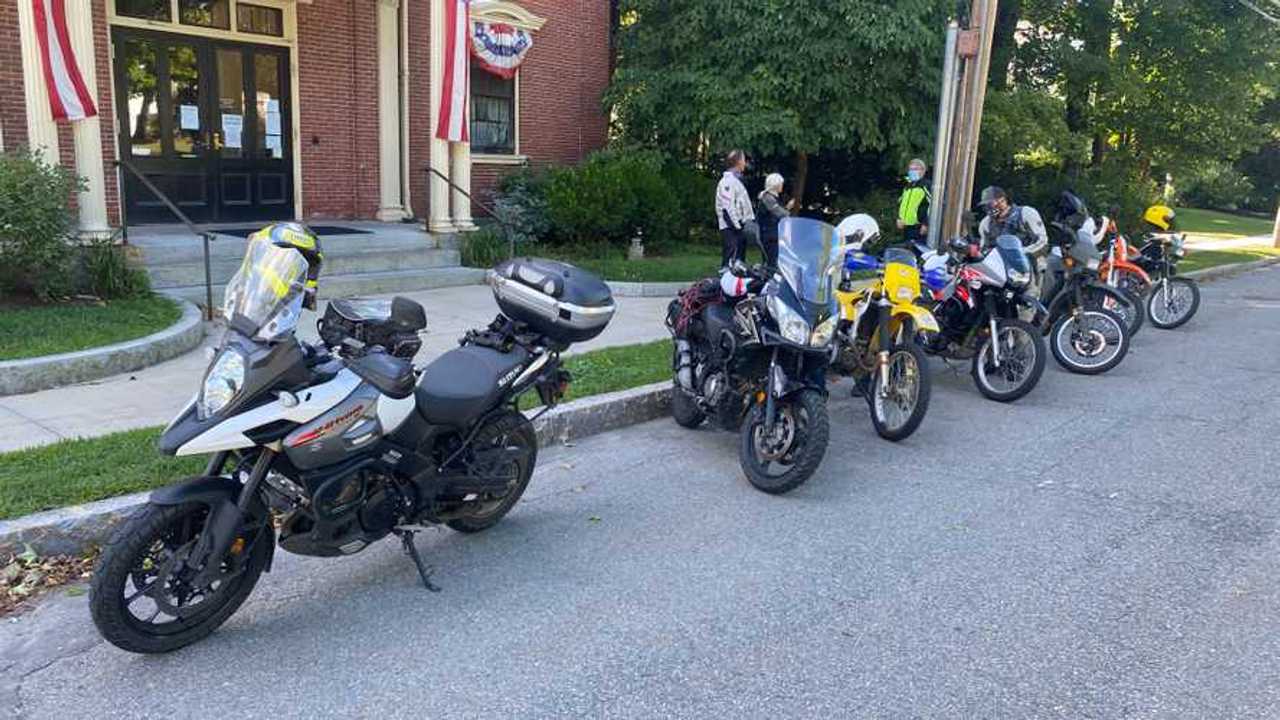 Dirt riding can be a social activity as well as a personal challenge.

Only in the past month or so have I gingerly tried my hand—more specifically, my recovering foot—at leaving the pavement behind. I've started riding my local dirt roads, carefully building my confidence and strength. More recently I've started trying the nearby class 6 (unmaintained) roads that I know are passable. The first time was a little sketchy, so I waited a couple of weeks before trying again, and then it worked fine. At this point, I think my dirt riding game is back to where it was at the end of last year.

Philip, a member of the New England Riders group on Facebook, invited people to join him for a dirt road day trip. I joined the crew of seven riders. There were seven of us in total. The first half of the ride consisted of a southern section of the Hampster Ride, a mostly dirt road route from the south end of New Hampshire all the way to the Canadian border. We didn't go that far in a day, of course, but we followed it as far north as Henniker, New Hampshire, about 65 miles away from our starting point. After a lunch stop, we took a different mixed surface route of about 70 miles back to Groton, Massachusetts.

The trip ended up taking all day, a much longer dirt ride than I'd taken so far this year. Philip set a brisk but not breakneck pace, one that everyone was happy with. It approached the limit of my own comfort level, but it was good for me. I could always slow down for a couple of curves if I needed to, then catch up afterward. By pushing myself a little, I found that I'm capable of more than I thought I was.

Under the wrong conditions, riding in a group can lead to madness, shenanigans, and a bad day when somebody gets hurt. That wasn't us. No one needed to show off how well we could wheelie up a rough hillclimb (though I was slightly embarrassed when I stalled the first time I tried it). We simply rode in formation, gave each other plenty of space, and Karen, at the back of our group, made sure no one got left behind.

Nobody dropped a bike, had mechanical trouble, or got hurt. This is the best kind of ride, and how we hope every ride turns out. If we had not been so lucky, though, the rest of us would've been right there to help. Knowing that I had that safety net empowered me to try riding a little bit quicker than I normally do. What do you know, it worked. Simply seeing that another rider on the same tires as me, and another one on a KLR, could take the roads at the speed we were going made me more confident that I could, too. I certainly didn't nail every corner perfectly, but I did well enough, without incident.

I also got to catch up with some old friends. I've been dirt riding with Karen before. I've ridden on the track with Jesse. He's new to dirt, but he's learning quickly after buying former RideApart writer Kate Murphy's KLR. I'd never met the rest of our group before, but it was good to make new friends with similar interests, something that's been far too rare in the age of the coronavirus. After today, I definitely understand why off-road and dual-sport motorcycles are gaining popularity even as road bike sales are down. It's an activity you can do with friends, but safely, with all due precautions against the virus.

You know how I said I was back to the same level I was at before breaking my foot? I don't think that's true. I think I'm slightly better than that now. Today's ride gave me the remaining experience points I needed to level up. That's always a good feeling.