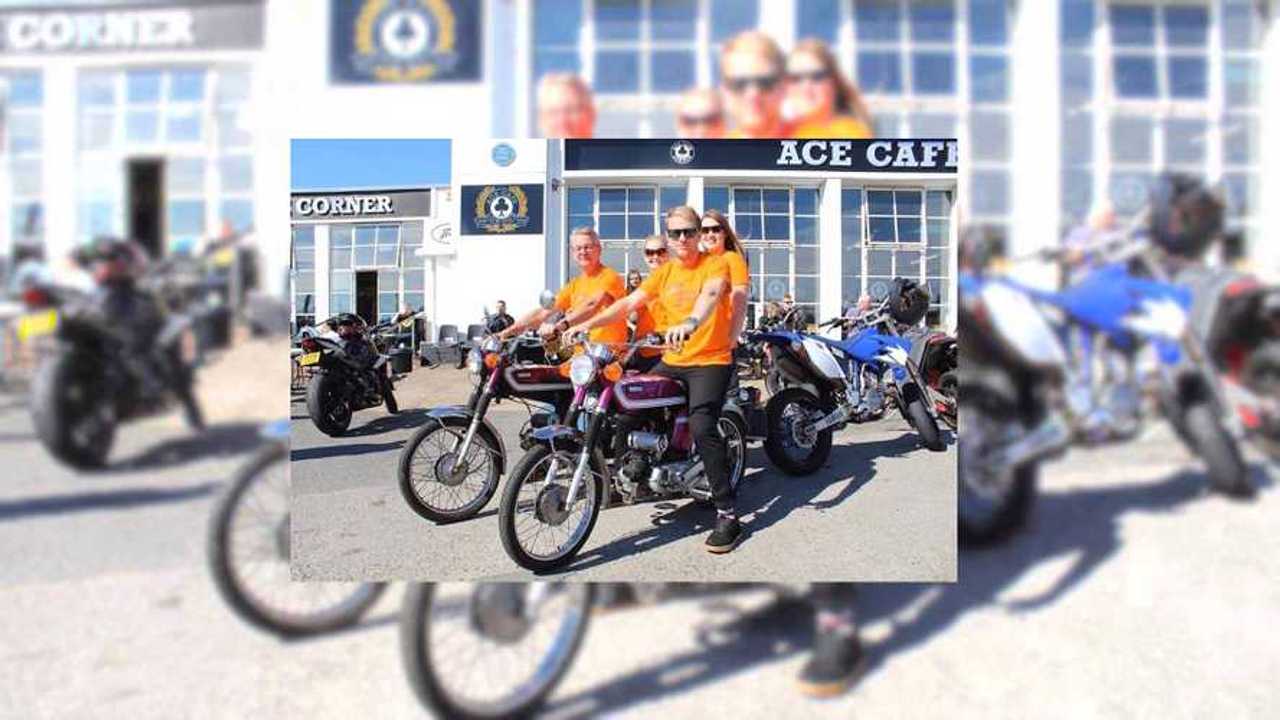 A UK father-and-son duo is about to kickoff a ten-day road trip on America’s iconic Route 66 in an effort to raise awareness and funding for Alzheimer’s research. Peter Shand, 54, and his son Darrel, 30, are not only slated to tackle the almost 2,500 miles of open road, but they plan on doing so on forty-odd-year-old mopeds, Yamaha FS1-E’s to be exact.

The father and son team will begin the journey in Chicago, Illinois on May 25, just one day after arriving from London. Darrel’s wife, Sam, will follow the two riders in a support vehicle packed with fuel, spare parts, and whatever else is required to keep the Fizzies running for the duration of their trip on the world-famous road. The trio will spend ten days making their way west across the eight US states Route 66 crosses, hoping to arrive in Santa Monica, California on June 6.

The team hopes to raise a total of £66,000—about $86.5K—though at of the time of writing the project has already collected over $6K. All the funds will benefit Alzheimer’s Research UK and Alzheimer’s Association USA, with the trip’s expenses coming out of the Shands’ personal wallet. The catalyst of the trip was when Peter Shand’s father, Stanley Shand, died late last year after suffering through more than-half-a-decade of the disease.

“I worked with dad for 37 years, and when I saw him go in the (special care) home, I really, really struggled with that, and I wanted to do something to honor him and obviously help Alzheimer’s research,” Peter explained during a radio interview with the BBC. “It’s the most awful thing. This is no way for anybody to end their life.”

The Yamaha FS1-E—affectionately known as the “Fizzy”—is a little air-cooled, 49cc, two-stroke, rotary-valve single that put down a mean 4.8hp and 3.6ft-lbs of torque. The Fizzy’s engine is married to a four-speed transmission and housed in a pressed steel chassis. Tipping the scale at only 154 lb, the top-tanker is good for a top-speed of around 45mph... that's until a government restriction was put in place in 1977, limiting top-speed to 30mph.

“They weren’t really made for riding two-and-a-half-thousand-miles in one hit,” Peter admits, though he argues the trip is about raising awareness, and sometimes raising a few eyebrows is a good way of doing that.

In theory, if the pair travel at 40mph, the trip shouldn't take more than 65-or-so hours of actual time in the saddle, which isn't too bad when broken up over ten days. The gang is expecting breakdowns along the way though, hence the support vehicle full of spares. We’re thoroughly rooting for Peter, Darrel, and Sam, and wish them the best of luck on their journey. If you’d like to contribute to the cause you can click here to visit the Fizzy Route 66 (as the trip’s being called) donation page.