Was the adventure worth the worry?

Imagine riding your motorcycle across a mirror, one that reflects the limitless above and beyond. It’s what happened for an adventurous duo of moto-travelers on the final day of 2018 as they crossed the Bolivian Salt Flats.  Problem is, the bikes didn’t enjoy the experience quite as much as the riders.

Video: From Alaska to Argentina on a KLR650 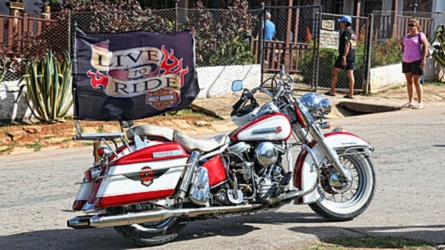 Tim and Marisa met up with fellow KTM adventure riders Kira and Brendon—also known as the Adventure Haks. Together, they tackled the treacherous flats on two, the day before the dawn of the New Year. “It was hard to tell where the land began and the sky ended,” writes Marisa of Notier’s Frontiers. “It felt like we were floating in oblivion, skating through a dream of ice and clouds, or simply soaring through endlessness.”

In the days preceding their visit, the Bolivian Salt Flats had received rain which resulted in astounding reflective effects. It’s also that water which, combined with salt, got into every, single nook, cranny, crevice, crack, and hole of their bike, where it instantly started to corrode—but we’ll come back to that.

As a precautionary measure, the two-up travelers washed their bikes in diesel grease before heading out into the peaceful panorama; it’s a protectant used by the rigs that cross the sodium plain regularly to make deliveries. It works so well that the rigs that the team observed prior to their own passage were rust-free.

On the travel day, the weather was perfect and the sharp-edged sodium provided a surprising amount of traction. That, and the most incredible, natural special effects created by the surface water against the white salt, maade for a spectacular end to an adventure-filled year, all captured on camera.

The friends frolicked on the flats—cartwheeling, jumping, and riding back and forth across the amazing landscape. At the close of the day, after chipping the salt build-up off their exhaust pipe, they headed out, at times, through deep salty slush, before checking into the salt hotel for a night of rowdy revelry.

The next day, however, the idyllic tale became less idyllic. The Haks’ sturdy steed made it through the day but Tim and Marisa’s did not. Over the preceding days, it turned out, many bikes had responded badly to the intense and extensive exposure to salt. Though Tim and Marisa were eventually able to revive their ride, it took a lot of time.

Would they do it again? They would, but they got lucky. Plus, the photographs are stunning and the whole scenario spell-binding so perhaps, in keeping with how most motorcyclists approach life, it’s worth the worry.

Check out this and other gorgeous adventures on the couple's blog. A special thank you to Kira and Brendon of Adventure Haks for allowing us to use their pictures!