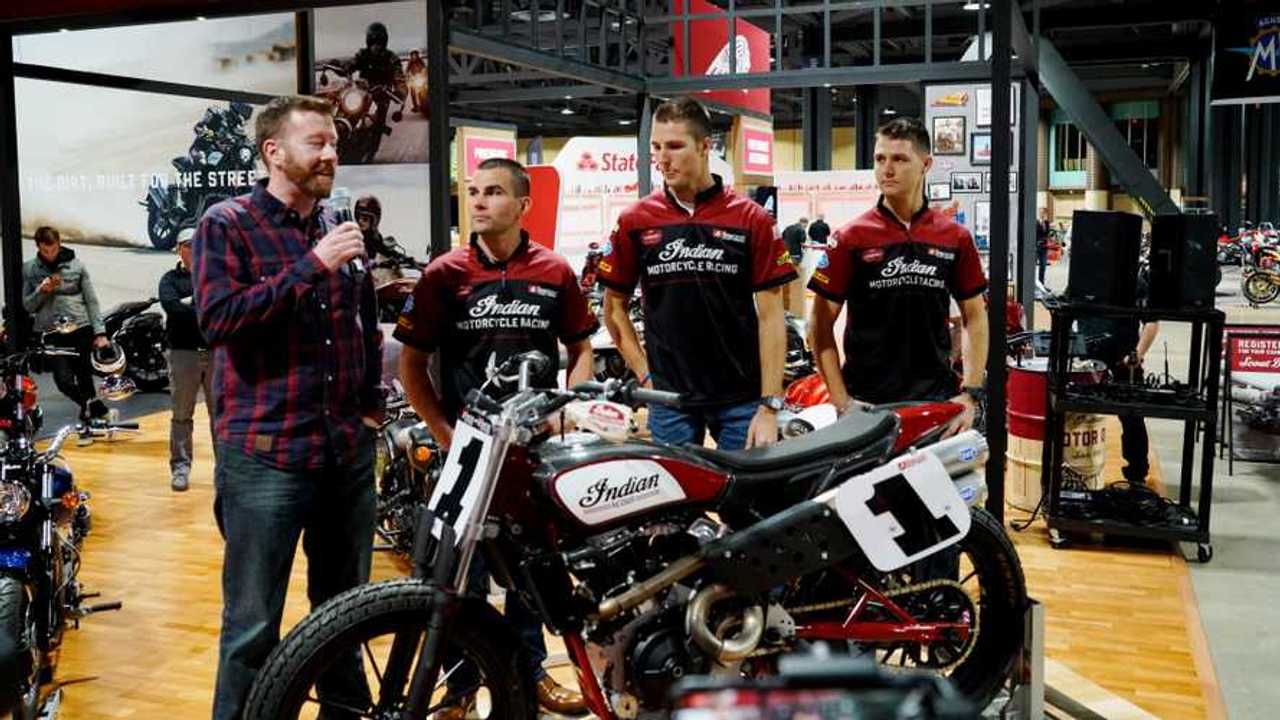 The Progressive International Motorcycle Show in Long Beach seldom has any huge news or model reveals, but Indian did use it to introduce the new member of the Wrecking Crew to the assembled motoring press. Jared Mees is, of course, returning to defend his and Indian's championships. Bronson Bauman joins the team, after filling in for an injured Brad Baker in the last few races of 2018, and his older brother Briar fills out the team, after years as a privateer.

If you have been following American Flat Track over the past season, you'll realize that these three riders were the top three finishers at the Williams Grove Half Mile. Oddly it was the privateer Briar, only newly switched over to Indian, who placed first in that race, besting his brother and the reigning champ Mees, both on factory FTR750 race bikes. Bronson only joined the Indian factory team when Brad Baker suffered a spinal injury at the 2018 X-Games, and at Williams Grove managed to pass Mees late in the race for his first ever podium finish on a twin.

Brad Baker high-sided while practicing at the X-games, fracturing three vertebra, which left him temporarily paralyzed, but he is expected to recover and serve as the technical advisor and coach. It was at Brad's suggestion that Bronson Bauman was called up to join the team for the remaining 2018 races. Former Wrecking Crew member Bryan Smith is returning to a Kawasaki powered bike and the Crosley/Howerton team that he won the championship with in 2016.

With the new rules changes just announced by AFT, this may prove to be a brilliant move on Smith's part. If you missed it, the pure race Indian FTR750 is limited to 38mm throttle bodies, down 2mm from last year, and 750cc for 2019. Meanwhile, modified production motors like Smith's Kawasaki and the Harley-Davidson XG750 breath through 40mm intakes and can be punched out to as big as 900cc.

Experts say Harley is struggling since liquidated their racing department decades ago, because they haven't had to do any real development on the XR750 since the 1980s. After a year of lackluster results they farmed out new high performance DOHC heads for the XG750 to Vance and Hines, but still have had little luck. The Kawasaki Ninja 650 motor is already pushing it bored out to 750cc, but Harley should be able to take full advantage of the new displacement limit.

It will be interesting to see what Briar Bauman, who might have won the last three races of 2018 if not for bad luck, will be able to do on a full factory bike. Even as a privateer, he was one of the fastest riders in the series on a variety of tracks.