Last week, the husband/wife team of Bill Dube and Eva Hakansson took this electric streamliner to Bonneville. The result wasn’t a new speed record, but rather the beginning of a road that could lead to electricity overtaking internal combustion. The 300bhp powertrain they’re developing will also make its way into the TTXGP electric road race series next year, available to participating teams i...

Last week, the husband/wife team of Bill Dube and Eva Hakansson took this electric streamliner to Bonneville. The result wasn’t a new speed record, but rather the beginning of a road that could lead to electricity overtaking internal combustion. The 300bhp powertrain they’re developing will also make its way into the TTXGP electric road race series next year, available to participating teams in component form. You’re looking at a very fast nerd-mobile. Different types of straight line racing. "Land speed racing and drag racing are very different. While drag racing is all about acceleration and power-to-weight ratio, land speed racing is all about top speed and dragforce-to-power ratio. In a drag racing motorcycle you chase every gram, in a land speed racing motorcycle you often add lead as ballast to get more traction.    If you look at KillaCycle and KillaJoule, there aren’t many similarities. KillaJoule is about twice as heavy as KillaCycle, but is expected to have a higher top speed with the same horsepower." The guts of an electric land speed racer have more in common with a custom computer than they do ICE vehicles. BUB Speed Trials, 2011. "The first days at Bonneville we performed the required speed increment runs for a new vehicle. You aren’t just allowed to go out there and go 200mph, both rider and vehicle are required to increase their speed incrementally. The first day we set a 110.707mph average over the flying mile, then bumped it to 138.586mph the second day with a top speed of 151 mph." "The third day we were ready to open the throttle more, but we discovered that we were up against the limitations of the DC drive, which held us below about 150mph. It would have been fun to be able to keep bumping up the speed in the second half of the event, but we had found the weakest link and it was weaker than we expected." "Of course, we always want to go faster, but 150mph the first time out is a very good result. The tech inspectors and fellow racers were blown away by how much we accomplished with minimal budget in the 18 months that have passed since we cut the first frame tubes. From this point of view, last week’s shake down and sidecar debut can only be summarized as a success." AC/DC. "A DC motor has carbon brushes that, in a mechanical way, make the alternating current that makes the motor rotate. All motors need an alternating current inside to actually spin, believe it or not. The brushes in each motor are made for 20bhp; when we try to push 10 times that power through them, they overheat or the current arcs over, acing like a welding arc and melting away the metal, destroying the motor." "An AC motor has no brushes, the alternating current is made electronically in the the motor controller. That eliminates the problem. Our new EVO Electric AC motor is also fully sealed, meaning no salt will get inside it, something that likely added to the problems we had. It’s liquid cooled, so we’ll be able to cool it during the runs using ice water and it also operates at higher efficiency, meaning it can take more power without overheating." "Other advantages of AC drive are the possibility for traction control, regenerative braking and the motor will also be able to operate in reverse, which will make moving around in the pits easier." The Mavizen powertrain. "The Mavizen powertrain will absolutely be AC. DC is cheaper per horsepower, but it is stone age technology." "The A123Systems battery pack can give us about 500bhp and so can the Zilla 2K-HV controller. But, this year’s DC motors could handle significantly less. The new AC drivetrain will initially give us about 300bhp. A new battery pack with higher voltage could go up to 500bhp or more, giving sufficient motor cooling." 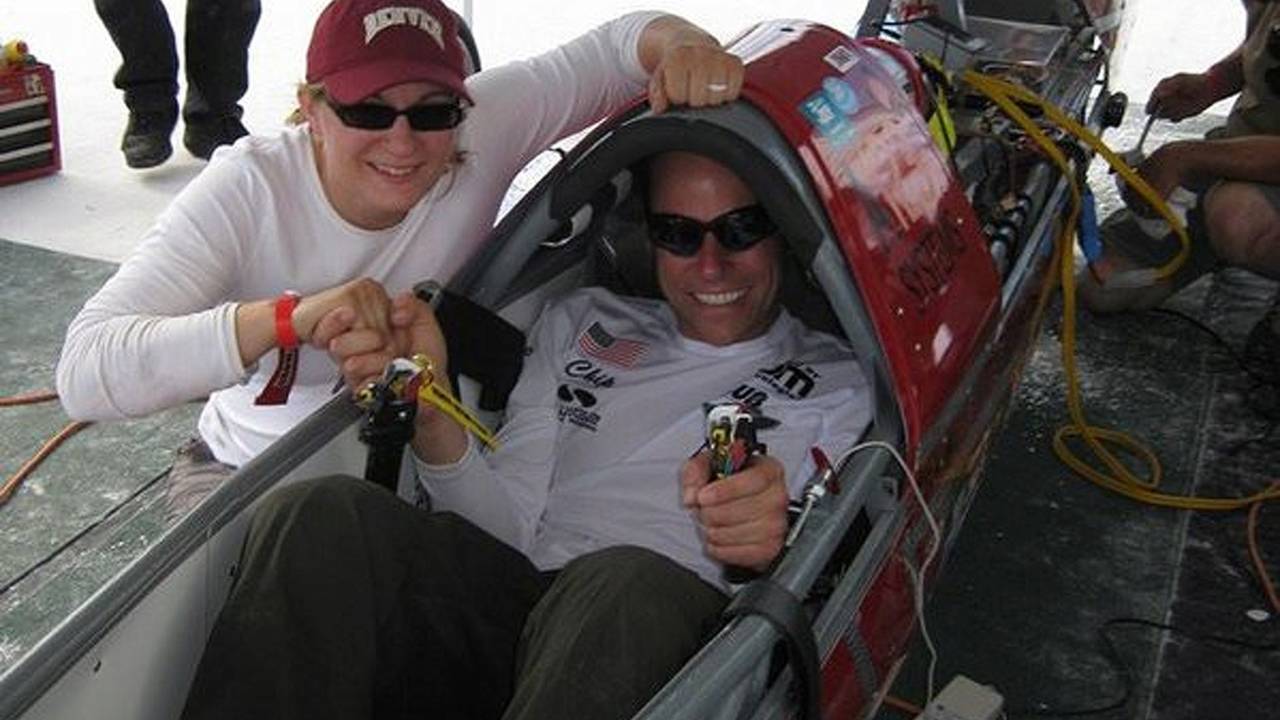 Eva and Chip Yates. Changing the world, one land speed record at a time. "The entire goal of the KillaCycle Racing Program, which includes KillaCycle, ElectroCat and KillaJoule, is to show the general public that eco-friendly can also be fast, sexy and fun. And that an electric vehicle doesn’t have to be a nerd-mobile or a traveling science experiment." "The goal for KillaJoule is to become the fastest electric motorcycle, a record that currently stands at 216mph, and the fastest sidecar of any kind (219mph)." "To reach that goal, we likely need another year, if not more. I’m a full time student and full time teaching assistant at the University of Denver and my husband Bill is a full time scientist at the National Oceanic and Atmospheric Administration in Boulder. We do this in our spare time, out of pocket." Tough questions, tougher answers. "The first question we always get is 'how fast is it?' Even if a 7.82 second 1/4 miles is impressive to those in the know, it means absolutely nothing to most people. 174mph in a 1/4 miles is also an achievement, but doesn’t sound very fast next to land racing speeds. We can also say, '0-60mph in less than one second,' but it still always comes back to: 'what’s the top speed?'" "I decided I wanted the answer to be something like '400mph.'" "To be able to give people that answer, I had to build a streamliner and shift to land speed racing, that kind of speed simply can’t be attained on a drag strip." "Also, it turns out that people are much nicer in land racing than in drag racing. It’s just a much less cut throat attitude. Maybe this is because there are so many classes and people end up competing against themselves, not each other." Training wheels. "For ultimate speed, a two-wheeler is likely better. But, at this point, the sidecar helps us to get everything else to work without having to worry about it falling over. My debut last year didn’t go well due to a beginner’s mistake and I needed that training wheel to regain my confidence." "Sidecar racing is also obscure and unusual. But, there are sidecar motorcycles in everything from motocross to land speed. There are even sidecars in the TT. What makes it even more fun is that my dad raced sidecar motocross in the ‘60s, so I’m following in his footsteps with KillaJoule." "A positive surprise was also that sidecar records are so low that we hopefully will be able to take them soon. If we take the overall sidecar record (169mph in FIM, 219mph in SCTA), it would be the first time since 1899 that an electric vehicle would take an overall record for a vehicle type."

Pam works wonders at keeping salt buildup off the tires. Racing at Bonneville. "Drag racing is much more comfortable. You don’t have to wait in the baking sun for hours and hours. Plus, on the salt, you have to be completely self-contained. There are no facilities except maybe portapotties and a hotdog stand. You need to bring your own power, shade, water, food, tools, spare parts, everything. Wendover, the nearest town, is very small and all you’ll find there are some casinos and a grocery store. There’s no racing tires, motor controllers or even wheel axles within hours." "Another big difference is that you are along on the track and that you start when you are ready. There’s no lights and no reaction time. The track is long, the markers are hard to see and there are no reference points to give you a feel for your speed. 30mph and 150mph don’t feel that different." "Despite the lack of engine noise, it is pretty noisy inside KillaJoule. Things rattle, there is wind noise, your head bangs the roll cage and the chain and motors make quite some noise. But, with no need to shift gears, it sounds just like an airplane taking off." The future of electric land speed racing. "A vehicle like KillaJoule will never be finished. Every time you bump up the speed, you find a new weakest link. If we manage to approach 250mph, I will have to upgrade to real land speed tires and rims and a second parachute. Every piece of a streamliner is custom built. Normal suspension, forks and handlebars don’t fit at all. I don’t dare count how many hours we’ve spent." "It took Tom Burkland 23 years to set the overall piston-engine land speed record (418mph). But look at the advantages we have, the electric powertrain means we can make more power from a smaller package and we can also get traction control of a completely different dimension." "Becoming the world’s fastest motorcycle of any kind is the dream. To reach it, I’ll need a few years."
By: HFL Staff
++
++
Got a tip for us? Email: tips@rideapart.com