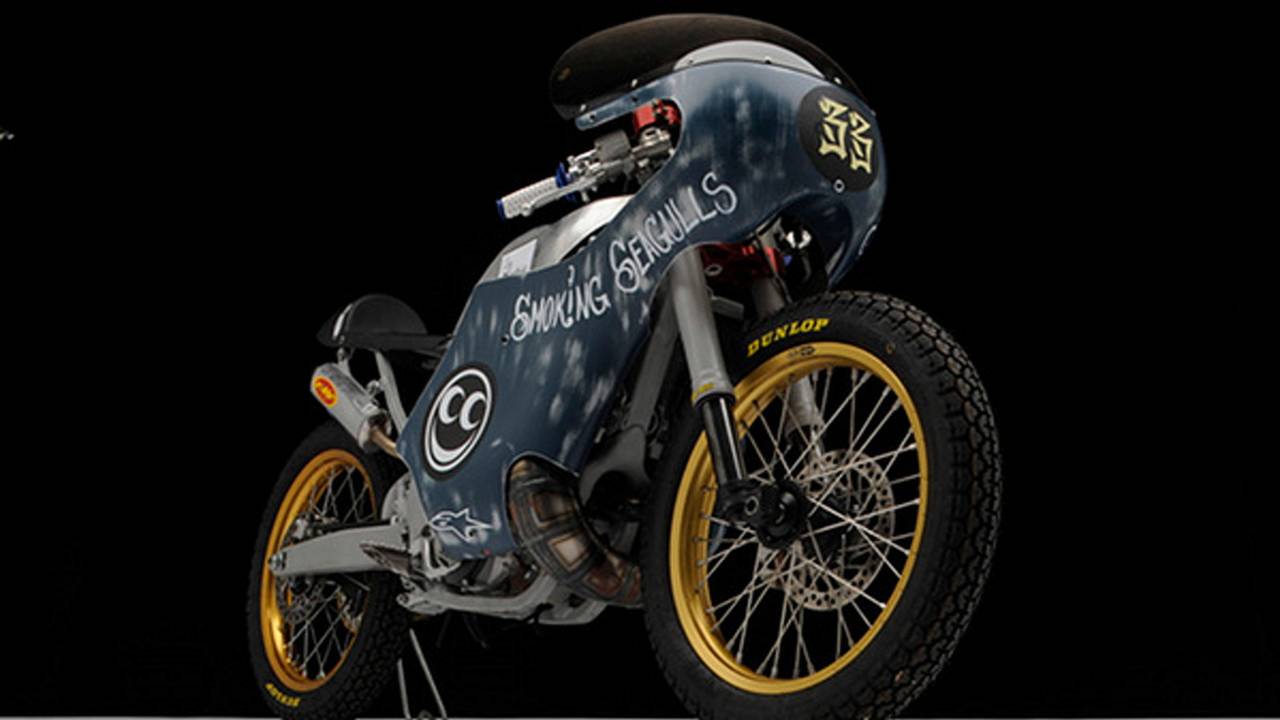 “If you are familiar with my background of fabricated employment, you know that I have been a dancing monkey on motorcycles for over a decade. American Honda passed this machine down to DVS Shoes and it was immediately turned into an FMX workhorse. It’s been ridden in an uncountable amount of freestyle demos and contests. I rode the Dew Tour on this bike and both seasons of Red Bull’s The Great Ride Open.

“Roland rang me up to ask if I would like to participate in a motorcycle gallery put on by famous bike photographer Michael Lichter at the Buffalo Chip in Sturgis. I had always wanted to make an old school road racer using a modern two-stroke.”

“The goal for this project was thrift. To keep as much of the donor machine as possible. The frame, subframe, swingarm, powerplant, forks, shock, rear wheel and fuel tank were all kept. Everything but the tacking and bead work of welding was done by me. The stock tank was covered by an aluminum shell, the fairing is from Airtech and made for the single-cylinder Ducati 250 and 350s. Bubbles if from Gustavson. The glass tail and clip-ons are from Airtech as well. I laced a 19-inch rim to the stock front hub. The fat was trimmed off the subframe and the finish for the frame, swingarm and forks was achieved with a sandblaster and matte clear paint. Grips are Oakley BMX. Forks were shortened by me and Ron Williams, a late employee of Race-Tech, helped with the shock. All the paint and finish was me. I won’t fib and say rattle cans weren’t the culprit for the finish she sports. Tires are K70 Dunlops and I asked FMF pretty please for the factory-style pipe.”

“What’s this project for, you ask? For looking bitchin’ and applying a smile to your face, duh!”

“This little gem will be purchasable in the near future. I’m going to auction it for the Japanese Tsunami Relief Fund set up by my good friend Eigo Sato.”