How your motorcycle can help you survive The Big One 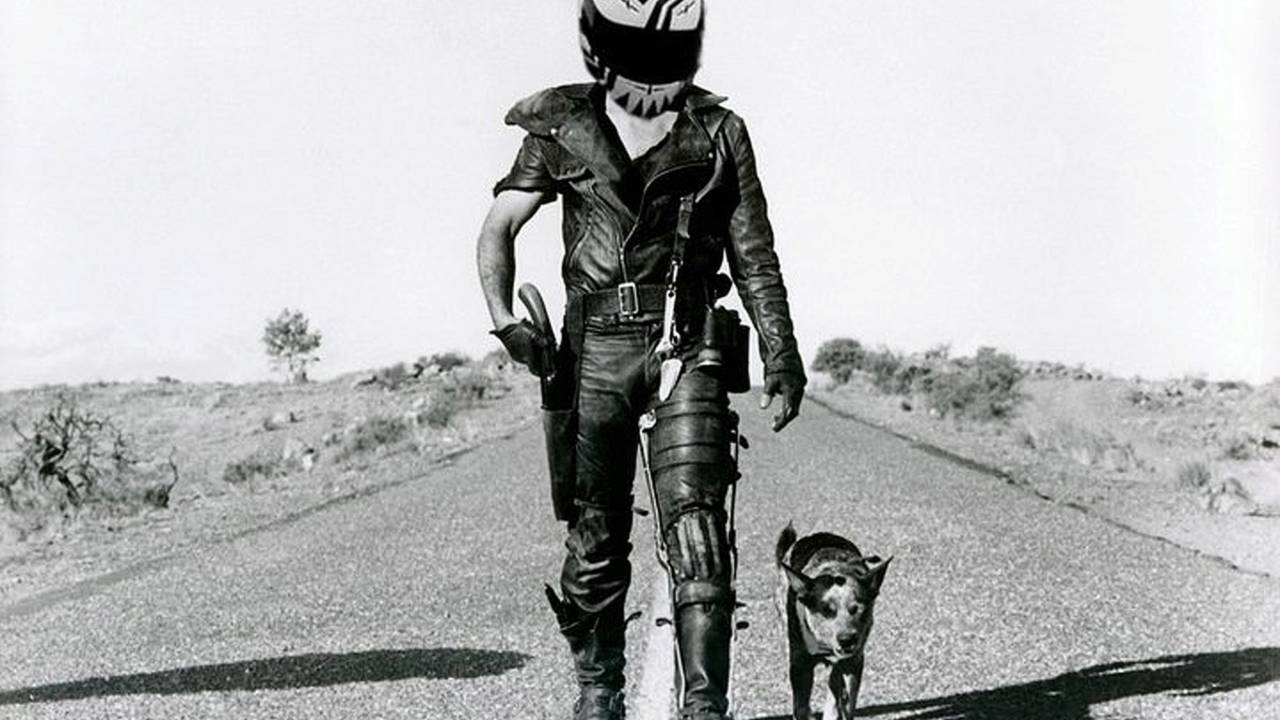 How your motorcycle can help you survive The Big OneSunday, geologists studying the San Andreas Fault announced new data that suggests Southern...

Sunday, geologists studying the San Andreas Fault announced new data that suggests Southern California could be at least 100 years overdue for a 7.5 magnitude or greater earthquake. That puts North America’s largest metropolitan area at increased risk for one of the worst natural disasters ever. A lot of people are going to dismiss this news with the can’t-do-anything-about-that mindset but, the thing is, you can. And, if you’re a Hell For Leather reader, you’re likely already more prepared to survive The Big One than most. Here’s how your motorcycle can keep you alive.

After any major disaster, especially an earthquake in Southern California, moving around by vehicle is going to become massively more difficult. Infrastructure, including roadways, signals, bridges, tunnels and signage will likely be damaged. People will likely try and flee the area. Those two together will create massive, region-wide traffic jams and will contribute to the third major problem: a lack of fuel. Pipelines, refineries and ports will likely be damaged and the trucks that actually deliver the gas to gas stations will be held up by the traffic and damaged infrastructure. Fuel pumps won’t work when the power’s off.

What’s able to get through traffic, past damaged roads and do so without needing much fuel? A motorcycle!

If you’re going to leave, have a destination.

“People confuse modern survival that involves a third party rescue with living off the land all the time,” explained Cody. “If the time comes, that’s going to kill a lot of people.”

If you’re in the city, even if significant damage has occurred, you’ll likely already have access to some sort of shelter and some supplies. Unless you have a specific destination — a well-stocked cabin or a family home outside the damaged area — then leaving is likely to be counter productive. Instead, use your bike to move around locally, finding supplies, contacting friends and family and helping others.

If you do have a destination, you need to have the means to reach it. If you won’t be able to find gas along the way, will you be able to make it to your destination on the fuel you have on hand and can carry with you?

The perfect survival scenario bike is probably a lighweight dual sport. They can traverse pretty much any obstacle and, if you find one that’s insurmountable, you can likely drag the bike through it by hand. They’re fuel efficient — the Yamaha WR250R, for example, averages 71mpg. They’re easy to ride. They’re robust.

But, you don’t need to rush out and buy that WR or an XR650 or a DR-Z if you don’t already have one. Just look for those attributes in another machine. Cody even suggested something like a 125cc scooter if you plan to have less experienced riders with you. It’s still light and fuel efficient and maneuverable and the scooter’s inherent ease of use will allow you to concentrate on other things, like making sure you hit the zombies in the head.

More importantly, you need a machine that you’re familiar with and that you can work on. You don’t want to find yourself halfway to your carefully prepared survival retreat, then suddenly find that your bike won’t run without some electric doohicky sitting in a warehouse somewhere in Italy. You need something simple, reliable and robust. I could fix pretty much anything that could possible go wrong with a Ural ST by the side of the road with a hammer, JB Weld and a couple of wrenches. Could you say the same for a Ducati Multistrada?

Careful modification can also make your bike more suitable for a post SHTF world. Those WR250Rs are pretty much the ideal survival vehicle with the exception of their woefully small fuel tanks. It’d be nice to have a greater than 100-mile range if you’re riding through a post-apocalyptic wasteland. A simple safari fuel tank would only cost a couple hundred bucks and can double if not quadruple that range. Basic crash protection is also a good idea, you don’t want your brains eaten simply because you broke a clutch lever.

Keep your bike well-maintained and know how to use it.

So The Big One hits and you’re feeling smug. You’ve got plenty of water, food and first aid equipment on hand and you’re ready to head to your parents’ place up north. You open your garage door, look at your bike, and it’s got a flat tire. Where are you going to get a spare now? It seems obvious, but you can only rely on your equipment if it can rely on you.

That dual sport is going to be great at taking to highway medians and crossing fields of rubble. But are you? Can you ride off-road? Can you ride for long periods of time? Can you ride through heavy traffic? Can you do all the above safely? All the equipment in the world isn’t going to do a damned thing for you if you aren’t equipped to use it.

Or, if you do, be prepared to deal with the consequences. Your survival plan is going to be majorly compromised if your leg ends up pointing in the wrong direction or you get a piece of rebar through the gut. It seems like common sense, but in a world without an ambulance ride just a phone call and a five minute wait away, you really don’t want to seriously hurt yourself. Safety gear helps, of course, but so does balancing risk and reward. it might look easy to take to the grassy median to bypass stalled cars blocking the road, but would it be safer to get off and walk your bike around? We’re not telling you to be a wuss, just that you need to be evaluating routes, obstacles and riding a little more carefully.

You also need to be prepared to deal with injury unassisted. How robust is your First Aid kit? Did you buy it al WalMart or did you assemble it yourself? Mine more closely resembles something a soldier would carry in Iraq than the kind of thing Boy Scouts take car camping. Take the time to research your needs and assemble something specifically designed to meet them.

“You’re going to have a mechanical injury on a bike,” cautions Cody. “It’s going to be heavy lacerations, it going to be road rash, it’s going to be a dislocated joint or a broken extremity. And those are very, very hard to deal with even from the scope of an EMT. An EMT simply stabilizes the injury and loads and goes to the hospital. That might not be an option. I don’t really know what to tell you other than that I would have some Ace bandages, maybe a SAM splint. I just know from being hurt real bad myself that I can’t even picture myself riding a motorcycle with broken ribs.”

To that, I’d add the ability to deal with heavy bleeding. That means QuickClot and tourniquets and the knowledge to use them.

Among hardcore survivalists, secrecy is treated as a way of life. The last thing they want is to lay in 10 years of provisions only to have to stretch that across 10 times as many people. They carry stuff into their shelters in small increments, they practice concealment, they hide in plain sight. Motorcyclists can learn a lesson from that if they’re preparing for a similar situation.

After a large disaster, rule of law can quickly disappear. Your friendly neighbor, motivated by a desire to survive or save loved ones may quickly become a bike thief. Your garage and padlock might be enough to keep out normal thieves, but will they deter someone in a life or death situation? After The Big One, your bike is going to become a very desirable possession.

One of my favorite security tricks is also simple, affordable and can be used even in a rented garage or open parking lot. To do it you’ll need a rubber trash can; a piece of scaffolding pole; the heaviest duty, motorcycle security-specific chain you can get your hands on (I like Almax) and some concrete. Put the pole in the middle of the trash can, slice two holes in the can at wheel level, pass the chain through the holes and around the pole, then fill the whole thing with concrete. Make sure the chain has plenty of slack to get through your wheel. Total investment is about $50 + the cost of the chain and lock. At a couple hundred pounds, you can likely slide the can itself wherever you need it, but it’s still large, awkward and indestructible enough to make stealing a bike that’s attached to it a major problem.

Some of the gadgets I carry on bike trips.

Cody promotes a no-nonsense approach to survival. What will kill you fastest? Prepare for that, not hypothetical zombies. “People don’t want to hear about clothing,” he explains. “They’ll have a backpack full of gizmos and forget about the clothing just like they’ll forget about their shit. Lack of sanitation is the biggest killer on the planet, so they’ll forget about their shit and they will die despite all their fancy survival gear. I’m not going to promote bells and whistles. Clothing is what separates the men from the boys on the back of your motorcycle. Even in the summertime, at night, on your bike, it’s can get down to the 40s with windchill.”

Reading HFL, you should already have a good idea of what makes good, practical riding gear. But, adding something like a Tyvek rain suit that weighs nothing and packs incredibly small to your go bag could make the difference between life and death. It’ll block the wind and keep you dry, which could be just enough to ward off hypothermia.

On a bike, you also need to make the best use of space. Water is an immediate concern — figure a gallon a day per adult — but it’s heavy and non compressible, so there’s literally no way you can pack enough of it for a multi-day trip. Instead, carrying the facility to make more potable drinking water from what you find can act as a sort of force multiplier.

“If I have a one quart water bottle, but I have a one ounce thing of iodine, then as long as I find other water sources that may not be safe to drink, I can make more,” says Cody. “The thing about iodine — with the contraindications: no pregnancy, no allergy, no thyroid condition — it’s fucking cheap, it’s fucking multi-use, it doesn’t weigh much, it packs light, it’s not like a Katadyn filter that does one thing and, ‘Oh shit, my pack is taken up!’ It’s a small bottle that also deals with wounds.”

I carry a couple of paper coffee filters in case I need to use really dirty water too.

Some basic tools are also a good idea, but go back to that concept of multi-use components. Carrying a full Snap-On tool chest is probably impractical. You want to be able to have what you need with you without weighing the bike down or overloading it and making it difficult to ride. A five-foot length of plastic tubing will allow you to scavenge fuel along the road.

Survival is all in your mind.

But really, all this is about is preparation and common sense. A little thought and work now could save your life later. Cody agrees, “My motto is, ‘The more you know, the less you need.’”