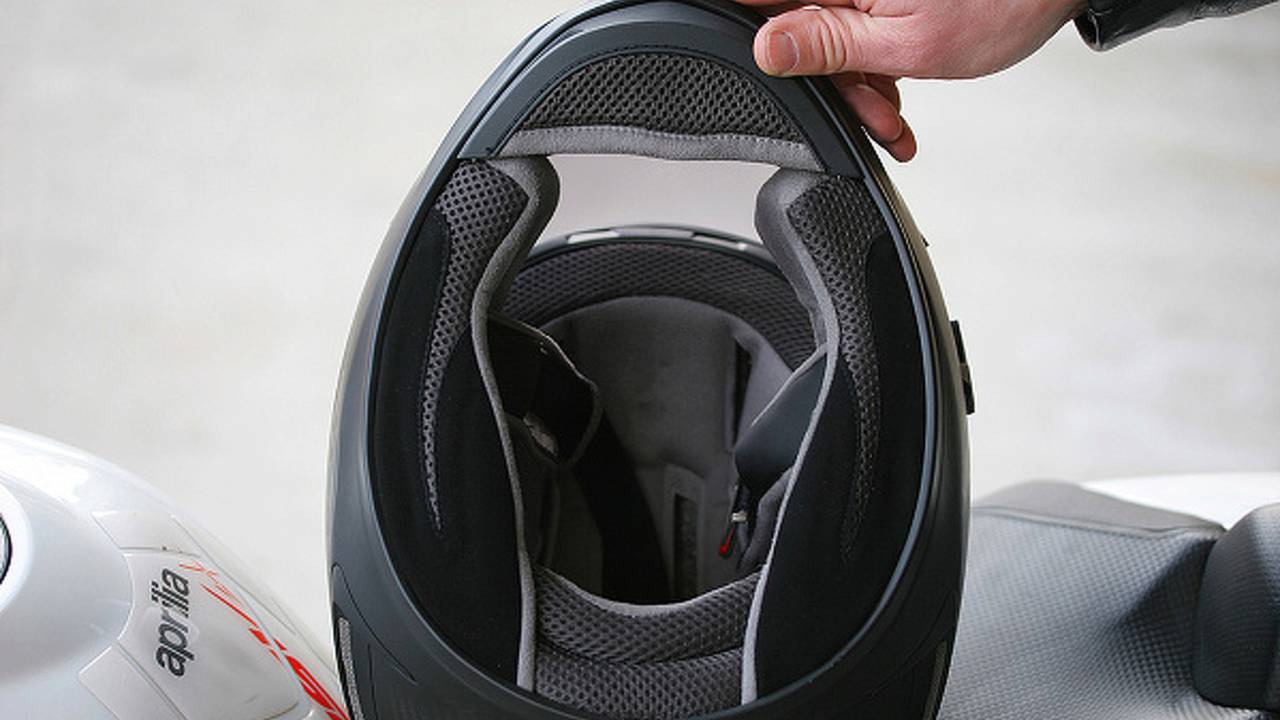 Eager to repair an image tarnished by years of low-quality products sold in discount stores, Bell Sports is pushing a totally new range of high-quality, well-designed helmets designed to compete with the biggest established players. That charge is being led by a top-tier roadracing helmet, the Bell Star, and this new-for-2012 flagship model in matte carbon. Fitted with a Transitions photochromatic visor, this is a $770 helmet. Should you pay that much for a Bell?

This isn’t the first time we’ve reviewed a Bell Star. Back in 2009, we were pretty tough on the previous version for poor quality, thin padding and high weight. But, that was the old model, built to the outdated Snell M2005 standard, which was replaced by this new M2010-certified model two years ago. More than just new safety standards (which should make it slightly softer and less concussion-prone, as well as safer for people with very small heads), the Star has been thoroughly revised with a better interior shape, more padding and higher quality components.

The Star itself starts at $550 for plain colors and a tri-composite (carbon, Kevlar, fiberglass) shell. The matte carbon version you see here moves that price up to $650.

The internal shape is now a less-narrow oval designed to make it more applicable to a wider range of riders. That’s complemented by thicker padding shaped more ergonomically — the cheek pads are contoured to conform to the shape of the chin bar, rather than straight pieces bent into place. Look inside the Star and the liner will initially appear cheap, drawing unfortunate comparisons with the “rat fur” material GM used on its rental car range in the late ‘90s and early 2000s. The slick material used inside high-end Arais appears much nicer. But, put the helmet on your head and you’re rewarded with immediate comfort and excellent moisture wicking ability. I’ve been wearing the Star on the way too and from the gym and, even going back on a head completely sodden with sweat, the liner remains, a month later, perfectly clean smelling and never feels sodden itself. If it does get stinky, that liner is removable and washable.

A genius touch? Like other Bells, the Star’s strap retainer is magnetic. Secure the D-rings, then just let the strap end magnet itself to big ring. Easy peasy.

Comfort is actually one of the new Star’s highlights, it’s up there with the most comfy roadracing helmets I’ve worn, including Arai’s RX-7, the Shoei RF1100 and AGV GP-Tech.

Coming home from the gym, there’s another area where the new Star really excels — ventilation. Like most other high-end helmets, there’s switchable vents on top and in the chin, but the Star complements them with a unique brow vent. Flick it open and you can see clear through four holes all the way to where your forehead will go. Open that vent while riding and you can feel the ventilation buffeting your forehead even at city speeds. The chin vent is better conceived than most too, the three-mode switch goes from fully-closed, to half-open, to full-open, more fully-tailoring ventilation than most other systems.

Air is pulled through the open/close top vents, into channels that run through the top of the helmet, then forcibly pulled out of the rear via exhausts tucked into the rear spoiler. That spoiler creates a low-pressure area where the exits are, essentially pulling air through your helmet. Secondary outlets behind the ears look large, but are, in fact, fed by only two small holes a piece — approximately half the size of those feeding the main outlets on top.

Aerodynamics are excellent outside too. From the unique flip in the chin bar that Bell developed in conjunction with Eddie Lawson in the 1980s and around to the squat rear-profile that the Star shares with another wind tunnel-developed helmet, the Nexx XR1R Carbon, overall stability at speed is essentially perfect, with no buffeting or susceptibility to crosswinds detectable. One thing it isn’t is terribly quiet, likely due to all that ventilation.

It’s in discussing other helmets like that Nexx that the Star begins to run into trouble. Built to the American Snell standard instead of the lighter, softer, less concussion-prone and arguably safer ECE 22.05 standard, the Star is relatively heavy. This carbon version weighs 1500gr for a medium, while the regular, non-carbon Star is 1550gr. The base $450, tri-composite Nexx XR1R weighs just 1300gr while the $600 carbon version is a welterweight 1200gr. Hold the two in your hands and the difference is night and day. An American company, it’s understandable how Bell arrived at the decision to go with Snell, but it would make a better helmet if, like fellow Yank Icon, they chose to build to the superior European standard, doing so wouldn’t affect legality in America while opening up markets elsewhere.

You can read more about the incredibly depressing world of helmet safety standards here.

I’ve been rotating the Star with my AGV AX-8 Dual. Not just because the ECE 22.05 AGV is lighter, but because it comes out of the box utterly fog-free in any condition, an area where the Bell has significant problems. I’ve got three different visors to go with the Star, each of which begins to mist up any time the outside temperature drops below 60 degrees. This can be partially eliminated by using the little lever on the side to crack the shield a 1/4 inch, but doesn’t totally cure the problem until you’re above about 45mph. I’m also noticing some problems with optical clarity in both the Star’s clear and Transitions visors. At night, there’s faint staring around light sources and a general lack of total clarity. Not much, but enough to cause some concern. Both shields are brand new. Typically, I’d fit a Fog City or similar visor insert, but worry about the effect it’ll have on the already imperfect optical clarity. Maybe a breath guard is in order.

Having said that, I’ll take the Bell anytime I plan to be riding in both day and night conditions. That $120 transitions visor is a game changer, offering a one-shield solution at all times. Totally clear in the dark, it darkens to a moderate, slightly rose-tinted smoke when exposed to light, varying its degree of tint to suit the lighting. Those changes in tint occur rapidly, but not instantaneously. You’ll still want to open the visor if riding into a very dark tunnel, but the darkest level of tint is effective, yet moderate, meaning that even if you wind up under an overpass or similar, you’re not going to suddenly find yourself blind in the dark. It’s liberating not having to pack a spare visor if there’s a chance I might be out after dark; running over to a friend’s house in the late afternoon just got a lot easier since it no longer involves a backpack and I don’t have to worry about plans changing mid-day, keeping me out past sunset without a clear visor in tow. It sounds like such a little thing, but try it for a few days and you’ll appreciate the convenience.

Surprisingly, due to the AX-8’s physically massive visor aperture, vision out of the Star is absolutely on-par with that AGV and much improved over my old GP-Tech, especially in a cheesy tuck, as demonsrated in these static photos.

That old Star we tested in 2009 gave up after 3,000 miles when a visor pivot snapped off, revealing a seriously weedy little metal pin — virtually a wire — was all that held it on. This new model appears to be more robust and has held up to a month’s wear without any problems. Bell’s quick change visor mechanism is up there with the best, allowing you to just press the visor into place to fit it, while pulling one little lever on each side pops the visor out. Much better than AGV’s failure-prone mechanism, much easier than Arai’s pop, twist, crack, crunch thing and as easy and convenient as Shoei, after which the design appears to be modeled.

Bell also deserves top marks for the quality and looks of the shell. That matte carbon lay is flawless, likely benefitting from parent company Easton’s expertise with the material. Yes, the same Easton that make sports equipment like hockey sticks and arrows. Snobby aesthetes, we also really appreciate the subtle grey logos on this matte carbon edition, they help make the whole thing very subtle, yet still purposeful looking. All the peaks and points and creases in the shell are highlighted in a plain color like this, the design unfortunately becomes confused when combined with graphics. The only disappointment? Plastic vents on the carbon shell feels like a cost-cutting measure too far.

One unexpected benefit? The matte finish is incredibly resistant to scratching and marking, meaning I can throw it around a locker room without fear.

So, overall, could you replace an Arai or a Shoei with this Bell? Absolutely. Those two brands are the chief proponents of the Snell safety standard, meaning their American-market helmets are also unnecessarily heavy. Bell’s quality, comfort and vision are totally equitable with both those brands and the Star outperforms any of their products in ventilation.

The problem is that those old helmet stalwarts are being left behind by other, smaller companies who’ve really been innovating in recent years. Namely: Icon, AGV and Nexx. All three of those offer helmets at a lower price and of equivalent quality. AGV and Nexx helmets are appreciably lighter. All three are widely available (well, it’s easy to find Nexx online anyways) in America and meet ECE 22.05. Bell isn’t alone in needing to up its game if it hopes to compete as awareness of all three of those brands grows.

Having said that, despite the weight disadvantage and price premium, the Star matte carbon remains a uniquely classy helmet to look at; an incredibly comfortable helmet to wear, especially when it’s hot out; and a uniquely practical helmet when fitted with that Transitions visor. Hell, that visor pretty much makes a case for a Bell all on its own. Despite my criticisms, I plan to wear this Bell pretty much daily for the foreseeable future.