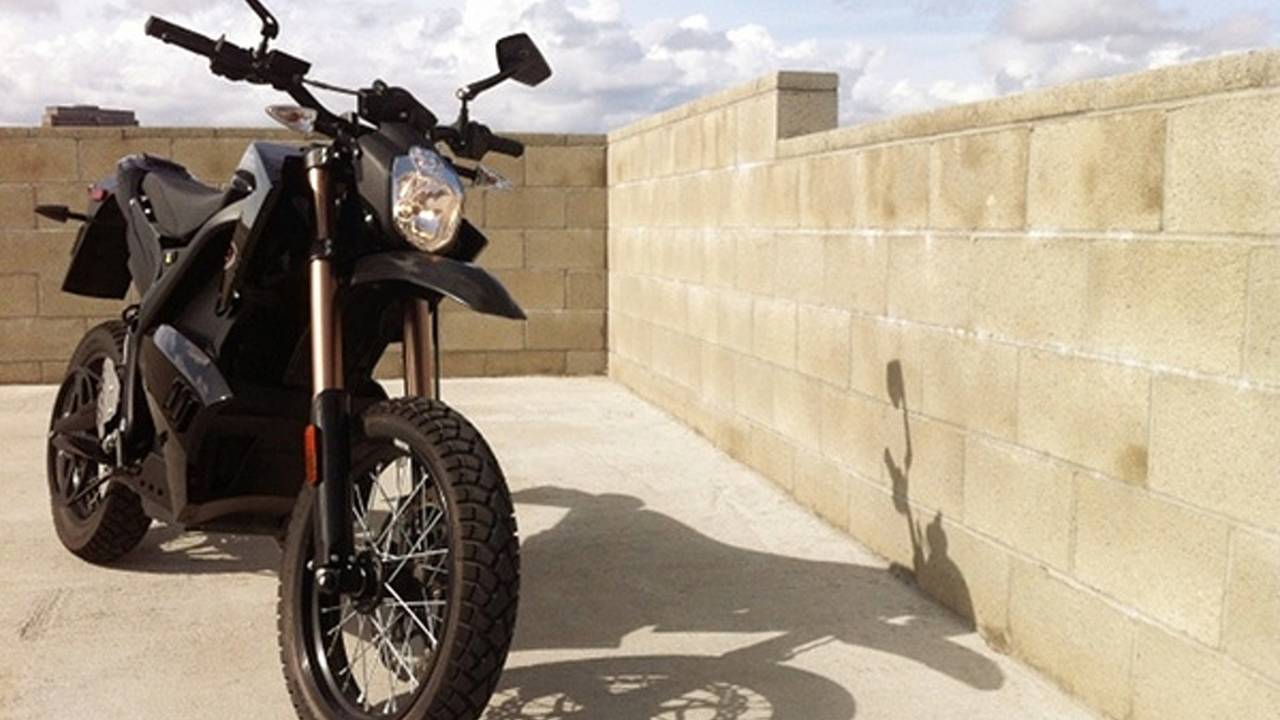 When we left off yesterday, I was out the door to pick up Ashlee and go for an evening ride around LA. With the prospect of a couple hours’ riding looming, I was getting pretty paranoid about the Zero DS’s range, but actually looking forward to riding it around city streets. Well, I didn’t end up pushing, but I did get soaked. - Nearly 60 miles of riding last night. Over to Sean and Ashlee...

When we left off yesterday, I was out the door to pick up Ashlee and go for an evening ride around LA. With the prospect of a couple hours’ riding looming, I was getting pretty paranoid about the Zero DS’s range, but actually looking forward to riding it around city streets. Well, I didn’t end up pushing, but I did get soaked.

- Nearly 60 miles of riding last night. Over to Sean and Ashlee’s, then Silverlake, then back to Sean and Ashlee’s then home. Full throttle in Sport mode on the way over since I was running late, then easy cruising while I was riding with Ashlee, then Sport again on the way home, but at slower speeds. That left me with 3 of 11 bars on the battery gauge.

- Started raining while I was chilling over at Sean and Ashlee’s post ride. Haven’t been as cold on a bike as I was riding home in jeans and my Vanson for a long time. Seriously, I was shivering so hard it impaired my ability to ride in a straight line.

- Conditions were pretty sketchy too, so I backed way off. Initially it seemed odd being scared to use full throttle on a relatively slow bike, but after that wore off, it actually made the Zero feel like a more complete motorcycle. Riding along with some twist left to go on the throttle feels much more normal and gives you time to focus on the other components.

- The DS actually has surprisingly nice suspension. At a time when major manufacturers are cutting corners by cutting content, even in flagship superbikes (we’re looking at you, Yamaha R1), this electric commuter is equipped with positively plush damping front and rear. Fully adjustable too. Very light, it remains slightly skittish over bumps, but the suspension is working very well at keeping the tires in contact with the pavement.

Two bars down in 9.2 miles of riding. The DS is a blast to ride quickly, but you pay the price in range if you do use it aggressively.

- I’m still really disappointed in the headlight. I guess more so than ever after spending hours in the dark. I understand that such a tiny, tiny manufacturer has to source components from existing suppliers, but surely there must have been something in that parts bin capable of actual illumination. As it is, even on high beam, the headlight serves only as a position light, providing no meaningful illumination of the road ahead.

- Brakes initially felt a little wooden, but some more time on the bike has brought familiarity, and I’m now comfortable with a fine degree of control, trailing through corners and whatnot. A car stopped abruptly in front of me last night and I had to grab a whole handful to avoid hitting it; outright stopping power is very good.

- Ashlee’s still a very green rider and hasn’t had much chance to practice with Sean being injured. So last night was about looking out for her while she gained some experience. Even with a new rider onboard and only making 14bhp and 12lb/ft of torque, the CCW Misfit left the Zero for dead up to 25mph.

- Zero’s official line is that throttle response has been turned down off the line to save energy. That makes sense too, why spend the limited amount of electricity the 9kWh battery pack is capable of carrying on stop light drag races? Still, I’d prefer to have energy conservation in my right hand, choosing when I want or need to accelerate hard and when I don’t.

- Because I planned on chaperoning Ashlee all the way back to her place in Westwood, then riding home to Hollywood and we were getting Pizza all the way east in Silverlake, we ended up skipping the actual ride with the East Side Moto Babes. By the time were were at the Pizza joint, I was already one bar below half and just didn’t think another 40 minutes of riding would have made the total trip possible.

- Extended my time with the Zero DS today so I can throw it in a truck and take it camping in Death Valley later this month. Really looking forward to riding around off-road, in the absolute wilderness, in complete silence. That’s going to be neat.

- When I got home last night, it was pouring and freezing, so I didn’t want to leave a window open to run an extension cord outside to the bike. Was a bit worried that those 3 bars wouldn’t get me around Hollywood this morning and that I wouldn't be able to get enough charge to take the bike downtown for a meeting this afternoon. That quick charger is great though. Rode to the cafe, worked for a couple hours, then came home and plugged in for 2 hours even. On the quick charger, that took me back up above half a tank. Plenty to run downtown and back at 85mph on the 101.

- It’s probably silly, but my range anxiety has me too paranoid to use highbeam much, where I typically would while splitting freeway traffic. I’m going to figure out what its draw is, then calculate the difference between high and low beam battery drain. If my math is up to that of course.

- That said, the DS continues to be absolutely perfect for lane splitting. Incredibly slim and confidence inspiring, the riding position is high and commanding enough for good vision and all that 25-70mph torque just makes sailing through traffic a breeze. Which is all the drivers hear as I pass them.

- My roommate Frank, a cartoonist who’s about as interested in vehicles as he is in Asian Subcontinent school politics, which is to say not at all, ran outside yesterday so he could hear me ride down the street. Regular people get pretty excited at the prospect of an electric motorcycle.

I’m living with a Zero DS as my only transportation for two weeks, updating you with daily journal-style articles. It’s the Life Electric.