Life Electric: Chip Yates at the Ritz and sausages at Deus 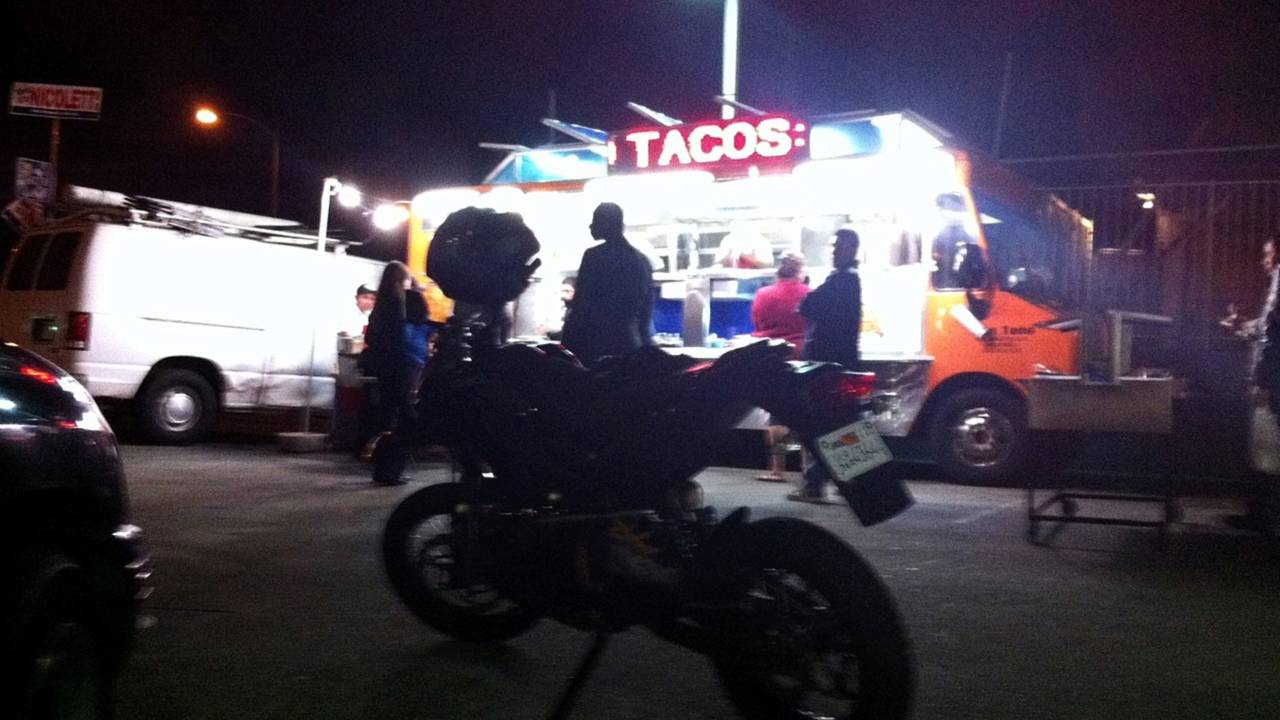 Sorry for the lack of Zero DS updates over the last few days. Been busy using it to do too many things in too short a time all around LA. We're a week in to living together now. Much more insightful than the quick test rides I've had in the past, I think I'm finally beginning to understand the Zero as a motorcycle and, honestly, I think I'm falling for it. - Last night I met Chip Yates for dinne...

Sorry for the lack of Zero DS updates over the last few days. Been busy using it to do too many things in too short a time all around LA. We're a week in to living together now. Much more insightful than the quick test rides I've had in the past, I think I'm finally beginning to understand the Zero as a motorcycle and, honestly, I think I'm falling for it.

- Last night I met Chip Yates for dinner in Marina Del Ray. 15.6 miles from home in Hollywood, there and back ate fully half the battery. Running late on the way there, then cold on the way back, I was riding faster than usual.

- Of all people, it’s not the man who beat ICE at its own game who you’d expect to shake his head in bewilderment at the prospect of electric bikes as consumer products. “They’re just not there yet,” says Chip, bemoaning the high price and low performance. He drove to Marina Del Ray in his speedboat, spending $500 in fuel on the way up from Newport Beach.

- I’ve been trying to be conscious of the regen, rolling the throttle completely closed way ahead of red lights. It’s not netting me anything noticeable. In ideal conditions, Zero claims I’d be able to net a 5 percent improvement in range using it. Chip was getting over 30 percent out of the front wheel regen on his electric superbike, a reverse Christini AWD system. Motorcycle physics just don’t favor rear-wheel regen, with a consumer product instead of a race bike, Zero has to tune its ultra-conservatively to avoid locking the wheel or sliding it out in corners.

- Rolled up to the Ritz’s valet to ask where they wanted me to park. I was able to ask that without yelling and without switching the motor off like usual, then carry on a conversation about electric motorcycles with the valet as he jogged with me through the parking garage. A fat, pasty midwestern father with a fanny pack hollered something like, “gee golly, that thur’s an electrical motorcycle,” as we passed him. Hope I didn’t throw off his heart meds.

- The flat track race in Ventura was called off yesterday after Friday night’s torrential rains. Suddenly finding ourselves with a free day, Sean MacDonald and I decided to go scramble over boulders, climbing into Eaton Canyon. I decided to leave the DS at home, worried about its highway range on the way there. Eaton was actually about our third choice, we threw around the idea of going by Roland Sands’ BBQ in Alamitos or maybe doing the Long Beach Grand Prix, but both those options required Sean driving up from Long Beach to pick me up, driving back down that way (30 miles), then bringing me home again at the end. Eaton was a simple round trip, picking me up on the way.

- There’s absolutely no indicator that the Zero has started charging once it’s been plugged in. You have to turn it on to check the charge level too. It’d be great to have an LED light confirming that you’ve rigged everything up properly or a MacBook-style charge indicator in the form of a series of LEDs or similar. As it is, I’ve been double checking that I’m not blowing circuit breakers and that all the various plugs are fully seated.

- Another charging niggle: the main plug is located down low, behind the front wheel. That places it in the spray stream and making it hard to find in the dark. It’s sealed against spray, but in the long term, you’re going to be digging debris out of it and getting down on hands and knees in the dark to find it. Again, $14,000 equals luxury good, simple fixes to stuff like this would go a long way to making it feel like one. Hollywood Electrics acknowledges this, relocating all the plugs on the bikes it sells to the top of the bike.

- The main people expressing interest in the Zero are people who don’t ride or used to ride. Not really current bikers. Sean MacDonald, for instance, scoffed at the idea of trading his Bonnie for the Zero when we ride to Deus for a BBQ this afternoon, but my roommate declared, out of the blue, that the DS is his favorite bike ever and that he intends to buy one now.

- I’m beginning to feel pressure to drive the electric message home to existing bikers by racing them and winning. Currently, the list of victims stands at: Honda Goldwing, BMW R1200RT, Ducati Monster, Ducati Hypermotard, Suzuki GSX-R, some girl on a Vespa, every Harley in SoCal.

- A lot of you have been questioning the wisdom of my plan to take the DS off-road camping in Death Valley in a couple weeks. With up to a 112-mile range, that’s going to be plenty of fun on a single charge. Off-road riding, especially over DV’s rocky landscape, is slow and short-distance. Putting a full charge in the batteries, then trucking it in, I bet we leave with at least 1/3 capacity still in it and have plenty of fun cruising around in total silence.

- Overall, I think I’m falling for the DS. I’m overly paranoid about the range, but haven’t gotten below 1/3 charge yet. Sure, it’s slow away from the lights, but once you hit 25mph, it’s an honestly fast motorcycle. One that’s ridiculously slim, has completely linear throttle response and inspires confidence through high-quality suspension. If it weren’t for that 0-25, it’d be, with no qualifications, the perfect city bike. I’m going to go cruise over to Deus in a bit, passing all sorts of bullshit Bike EXIF rejects along the way.

I'm spending a few weeks living with no transportation except the new 9kWh Zero DS and bringing you candid insights in the form of journal-style updates. It's the Life Electric.