Here’s the deal with sidecars 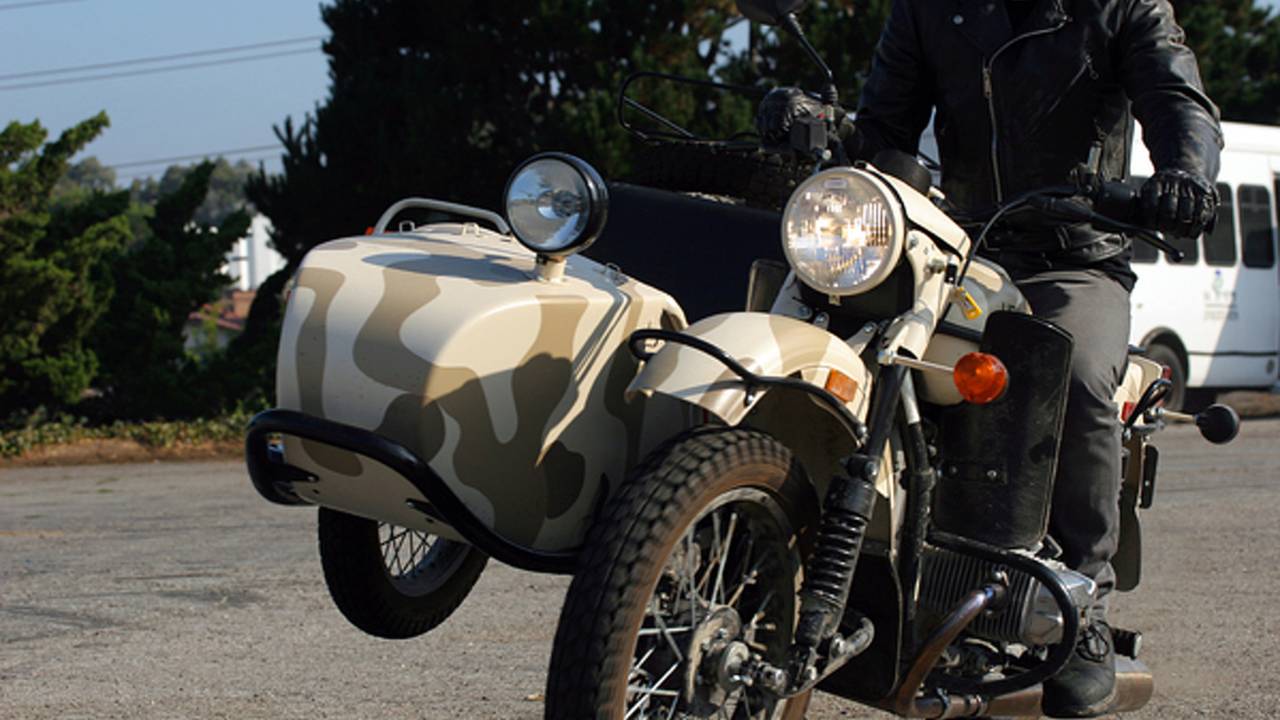 When you first ride a Ural, it's likely that you'll feel equal parts giddy-excitement, fear, confusion and curiosity. Giddy-excitement from the thrill of riding something that goes sideways every time you turn left. Fear caused by steering that changes with each throttle input, gear shift, brake application or bump. Confusion after you realize you're not going terribly fast. And, once you get used...

When you first ride a Ural, it's likely that you'll feel equal parts giddy-excitement, fear, confusion and curiosity. Giddy-excitement from the thrill of riding something that goes sideways every time you turn left. Fear caused by steering that changes with each throttle input, gear shift, brake application or bump. Confusion after you realize you're not going terribly fast. And, once you get used to riding a rig, you'll be curious as to exactly what they’re good for. In the case of this Gear-Up, it's going for two things: honest off-road capability with plenty of storage for extended camping and enough charm to make even grumpy middle-aged housewives stop to say “hi.”

The most important thing you have to learn about sidecars is that they're not just strange motorcycles. They're also not three-wheeled cars. Or anything else for that matter. The sidecar is the platypus of the wheeled vehicle world. It doesn't make a lot of sense and everyone stops to say "what's that?" The addition of a third wheel to the right and slightly ahead of the rear wheel does very strange things to the handling. Instead of using lean angle and counter-steering to turn, you turn the bars in the direction you want to go like you would with a steering wheel. But it's not like a car. Turn the bars left when accelerating away from a light and the front tire will lose traction as the rear wheel pushes the rig right. Attempt a sharp right turn after closing the throttle and you'll find yourself trying to balance the rig on two wheels. Sidecars are very strange indeed. The Gear-Up does some things very well, others decently and some things just plain badly.

A cure for motorcycle anxiety

Though just as dangerous as a motorcycle, people who openly admit to being terrified of motorcycles will let you strap them into gear and willingly hop in the sidecar for a ride. It's still not a motorcycle, but does make a good gateway drug. Neighbors who refuse to make eye contact will go out of their way to ask for a ride. Your passenger, if they’re not petrified by fear, won’t be able to stop grinning. There really isn’t anything in between. If they like it, there's hope for them yet.

Riding with a passenger actually makes the rig perform better too. An aggressive monkey with a good sense of balance and enough strength to move around is the key to fun on a sidecar. Right turns become fun powerslides with the inside wheel off the ground and tire-smoking bonzai left handers are all too easy.

After riding a motorcycle everywhere, you'll be caught off guard by the massive amount of stuff a sidecar can carry. Three days worth of camp gear for three people, off-road gear for two and plenty of room for two or three passengers. The same trunk that is great for camping is also great for hauling groceries, picnics and a spare helmet and jacket for the friend or friendly stranger that will inevitably want to go for a ride.

It's also unquestionably cooler than that Touratech equipped R1200GS at Trader Joe's. No way that guy's girlfriend is getting on the back and carrying her flowers all the way home.

Cruising down the freeway

Down-hill, with a tail-wind and a strong draft from a large SUV, the official indicated top speed is approximately 95mph. At least, that's the highest the wildly waving speedometer needle reached. On a flat road with no wind and a light load, assuming the alignment is set right and the sidecar brake isn't dragging, you can hit 80mph. Ural's 33mpg prediction is also pretty far off; we saw as high as 45mpg with a large load and sustained full-throttle freeway riding. You won't get anywhere fast, but it's not bad to put around in.

A two-wheel drive camo sidecar doesn't belong on the freeway though. It belongs in the dirt. On a fire road with a capable monkey (Ashlee Goodwin, as always), the Gear-Up is shockingly fast. To go left, roll off the throttle and apply some front brake to get things sliding. Once you can see the corner exit, go full throttle to straighten out and add back some of the speed you scrubbed off. On a motorcycle, throttle control is extremely important, but with a weight somewhere around 750lbs before rider, monkey and gear and only 40bhp, it's best to use the Ural's as an on/off switch. Besides, wheel-spin looks cool and will help you with your steering.

Sidecars are probably where the idea of a circle wheelie came from. With a little practice (and a good sense of balance) you can ride in circles all day long with the chair off the ground. Or go the other way and spin donuts. Use two-wheel drive in the dirt for even more impressive dust clouds.

Right turns are where we separate the men from the boys. Set your speed before turn-in or make damn sure you have plenty of run-off. The rig won't turn right on the brakes; the chair will just lift off the ground. Instead, go in slow, make sure your monkey is as far off as he/she can get, whack the gas open to break the rear wheel sliding and run a smooth arcing line through the corner. Going in hot means you'll be forced to run wide, any correction means you'll run wide. This is why Wes crashed it.

Jumps, water-crossings and other bad ideas

There are only two rules you need pay attention to when jumping the rig: 1) make damn sure there's enough air in the rear tire and 2) be careful of where you put the side wheel. If it's bounced up higher than the rest of the rig by a large rock or uneven slope, you're in for a scary landing. If you run the rear tire at less than 20psi, you'll appreciate the on-board spare wheel and very complete tool roll. The center stand also starts to make sense. You have to remember that what you're riding is basically a half-century old design. The guy in front of you on the KTM 450 is faster and there's nothing you can do about it.

Water crossings should be taken as slowly as possible. First, assess whether or not the water is deeper than the air-box. If you think you can make it without drowning the motor, pop the rig into 2-wheel-drive, pick a line and go for it. You'll have plenty of traction, so if things don't work out the way you hope, just stop, reverse and try another way. If the water level is higher than the air-box, and you really need to get across, gather as much speed as possible, pull in the clutch and hit the kill switch just before you plunge into the water. You'll get wet, but you won't seize the motor (though ice water on hot cylinders can't possibly be a good thing).

In traffic, a sidecar performs similarly to a car, but with the feeling of riding a motorcycle. It's as awkward as it sounds. Every step of the way, you're reminded that motorcycle controls, motorcycle engine and motorcycle gear do not a motorcycle make. It's also not a car. It doesn't lean (unless you're flying the chair), brake or accelerate very well. Minor traffic annoyances are terrifying in the Ural. Cars turn left and right the same way, you don't usually have to wear a helmet, they have air conditioning, get terrible gas mileage and require a full parking space. A sidecar is its own beast and it's impossible to compare it to anything else. Remind yourself that you're piloting a sidecar and that the sidecar has a big wheel hanging way off to the right. You wouldn't want to catch it on a car, pole or curb. Wes has a terrible problem with this and is constantly on the verge of running people over or tearing the sidecar completely off.

Right turns with a passenger are awesome, but without that intelligent movable ballast, it's a different story. If you think the margin for error while cornering on a bike is slim, a sidecar may not be for you. If you come in too hot for a right hander, that's it. Game over. You're running wide or crashing (ask Wes).

There are a few things you need to remember and regularly practice if you're going to survive right turns. The throttle is your friend. Open it to the stop, fast, to break traction and initiate a slide. You can still fly the chair in a slide, but it won't get as high or be as likely to tip over. If you come in way to hot and there's no hope of saving it, you'll have a second to decide how you're going to crash. Wes chose wisely, set the chair back down and scrubbed off 25mph before he hit something hard. Your instinct will be to just turn the bars harder. That's bad. You'll flip the rig and end up underneath 750lbs of Russian steel. If you can run wide, do that. If you cant, scrub off as much speed as you can before you run into something solid. You may even want to consider bailing out.

So what is the Ural Gear-Up good for, considering all the limitations? It's almost a car replacement if you live in sunny SoCal, but 100 degree days and traffic are pretty brutal since you can’t lane split. Plus, it can't be used for the one thing cars are good for: hauling track bikes. It's definitely not a motorcycle replacement either, though for a passenger it's more fun to ride in the sidecar than it is to ride pillion on a motorcycle. Where the Ural excels, beyond almost any other vehicle, though is fun. Take it camping. Take it to the store. Be a poser and park it in front of a coffee shop. You'll have a blast the whole time.