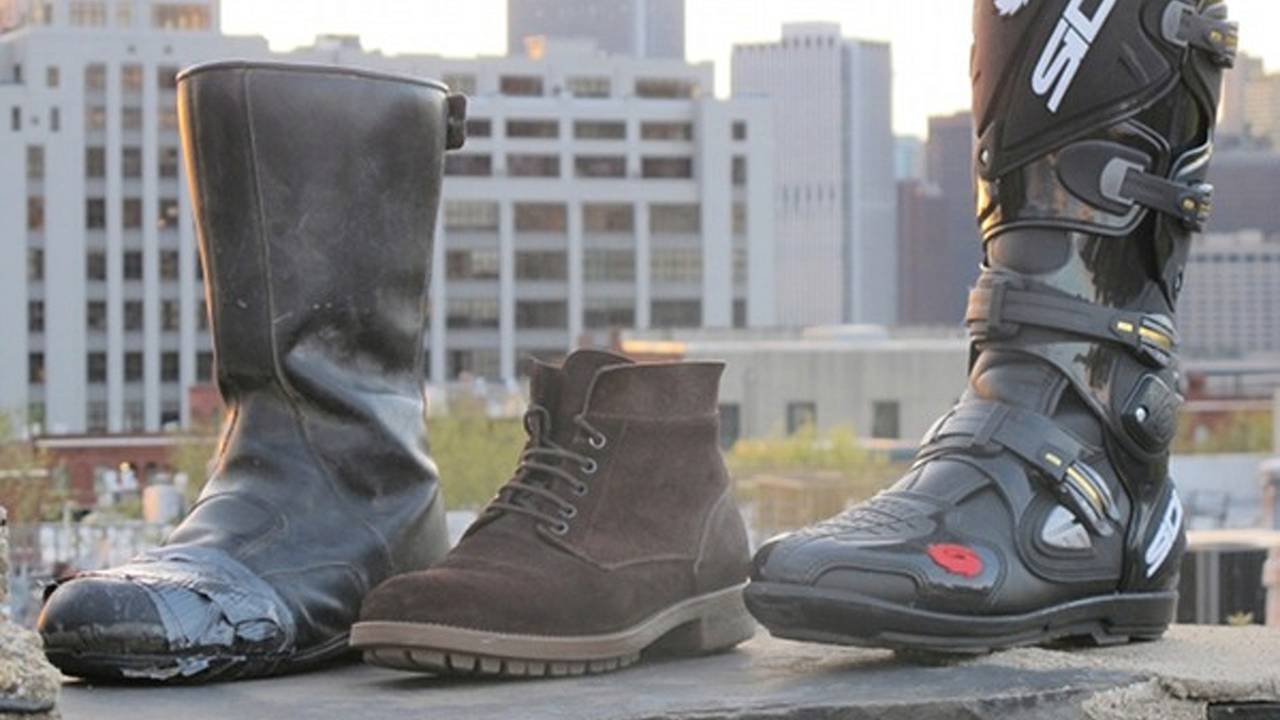 I’ve had these fantastic Sidis on my desk for a while now, but living in New York, don’t have access to any dirtbikes or any nearby dirt. That’s a pity, because the Crossfire SRS boots are made in Italy, allow your ankle to articulate, are famously comfortable and do an excellent job of protecting your bones. Too bad I wasn't wearing them when I crashed a dirt bike a while back. Here's what ...

I’ve had these fantastic Sidis on my desk for a while now, but living in New York, don’t have access to any dirtbikes or any nearby dirt. That’s a pity, because the Crossfire SRS boots are made in Italy, allow your ankle to articulate, are famously comfortable and do an excellent job of protecting your bones. Too bad I wasn't wearing them when I crashed a dirt bike a while back. Here's what happened because I didn't use proper footwear.

It was my first Enduro. I gathered up my gear and loaded my girlfriend’s TW200 into the back of a rental van I’d split with a friend. I had goggles, a full-face, visorless road helmet, gloves and pads — but the only boots available were these floppy touring jobbies.

The boots I wore that day (left) versus my new Sidis (bought post-accident).

When we arrived in New Jersey I got a better look at my buddy’s gear — MX boots, a chest protector, a Husky 450 and proper dirt helmet with a visor and goggles. But what I couldn’t take my eyes off were his boots. They looked like George Lucas props and I knew right then that I’d purchase some as soon as I could.

We started the Enduro together and I raced off in the first section. It was terrifically sandy and I lost control and augered in to the first puddle. Muddy water covered the side of the TW and poured into my left boot. I’d have grit between my damp toes and mud under my foot for the rest of the three-hour race.

It was nearly impossible to remove the boot at the lunch break midway through the race. Mud between the nubs of the zipper had dried and jammed the zipper. I had to use vice grips to pull the zipper tab open to extricate my foot. The open buckles on the Sidi boots would have done a much better job coping with the grit.

Off-road riding demands special techniques and special bikes; I had neither. In the second half of the enduro, I was riding feet too-far forward on the TW200's pegs, and the short bike rode low in the deep ruts dug up by the banzai KTM two-strokes that the rest of the world seemed to be riding. It took a lot of effort to keep an eye out for rocks and things that might catch my feet, and with a higher bike and better boot that mental energy could have been used to go faster. I winced at every near miss, and the knowledge that my feet weren’t well protected kept me from riding as fast as I would have liked.

WHOP! A stump caught my left foot and twisted it downward. The flexible leather touring boot offered next to nothing in terms of protection — the excitement of the race dulled the pain, but I had sprained my ankle.

At the end of the enduro I limped to the scoreboard and found that I had beaten my friend. He was used to an autoclutch and the manual clutch on his borrowed bike had worn him out. My sprain didn't become unbearable until a rest stop during the drive home, when I could barely walk.

Fast forward five months. My ankle still hadn't quite healed, and its weakness led to a forehead-splitting fall and crash into my neighbor’s door jam. While running down the stairs in dress shoes, I rolled my ankle and slammed my forehead into the corner of a doorframe in the hallway. I crumpled at the feet of an exterminator who was in the building, and could only mutter about how much it hurt. A bit more thought and money toward protective gear would have gone a long way toward preventing the forehead injury.

I had just switched jobs, so the forehead gash came during a 90-day gap in health insurance. I had to elect COBRA retroactively ($435) to cover the emergency room visit. Add three copays and I’d have been able to pay for the Sidis, which would have prevented both injuries (The total for the emergency-room visit came to more than $5800, but COBRA covered all but $54 of that).

The boots cost the same as the treatment. What’s a pound of prevention worth? In this case, an ankle sprain, the split forehead, limping for a month, and the emergency room visit. Those all stemmed from a single event in a single race. Sidi expects their boots to last for five years of regular use. Five hundred twenty five dollars might seem like a lot for a pair of boots, but it is certainly a lot less expensive and painful than ankle damage from racing dirt bikes in commuting gear. Good boots will make you more competitive too, since effective protection allows you to ride faster without changing your risk tolerance. One thing I know for sure is that the next time I ride an enduro, I will definitely be wearing Sidis.