Sean's West Coast Road Trip: Part 2A few weeks ago, I rode to Seattle and back to LA aboard Honda's new Gold Wing F6B. Here's the story of the trip...

A few weeks ago, I rode to Seattle and back to LA aboard Honda's new Gold Wing F6B. Here's the story of the trip back.

After spending a few days in Seattle, it was unfortunately time to head home. I had spent more money and eaten more food than I thought possible in 4 days, with only a desire to stay and keep it up for fear I had missed some great spots. Alas, there were still the bulk of 3 states between my current location and my bed and I responsibilities to get back to. Instead of riding back the way I had come, I planned to ride down through the central/eastern side of the states and continue to enjoy the ever-changing landscape.

My plan was to camp the first night somewhere in Southern Oregon, simply because it was half way to where I would be staying the following night. I was in no rush to get to my campsite since I would again be crashing at a site which had not opened for the season yet, which meant the less time I spent there, the better. My brother had one last spot he insisted I try before I left, so I decided to leave after an early lunch. Paseo may very well have been the best thing I ate in Seattle which wasn't surprising seeing as there was a huge line when we arrived 10 minutes before it opened. If you are ever in Seattle, make sure you make a point to stop and eat here.

With a very full belly and my stuff all packed, I got on the I-5 at about noon headed back to Portland. I had a few routes I was contempleting with Crater Lake as my destination and, since I had managed to get on the road at a decent hour, decided on the scenic route.

Highway 26 breaks off from I-5 right around Portland and makes a beeline for Mount Hood. The weather report indicated it was 5-10 degrees colder than Portland, so I assumed Hwy 26 just skirted around the outside of the mountain. An hour or so later I was riding down a mountain road with large snow banks on either side wondering if I was going to end up on another dirt road or stopped at a mandatory chain installation station. The road was gorgeous though and when I saw signs for a national park overlook, I decided it was worth a look. I ended up at the base of the Mount Hood Ski resort to the surprise of both myself and the resort staff, who wondered what some dude on a motorcycle and without skis was doing there. It was more than a little cold and I didn't stay for more than a picture. 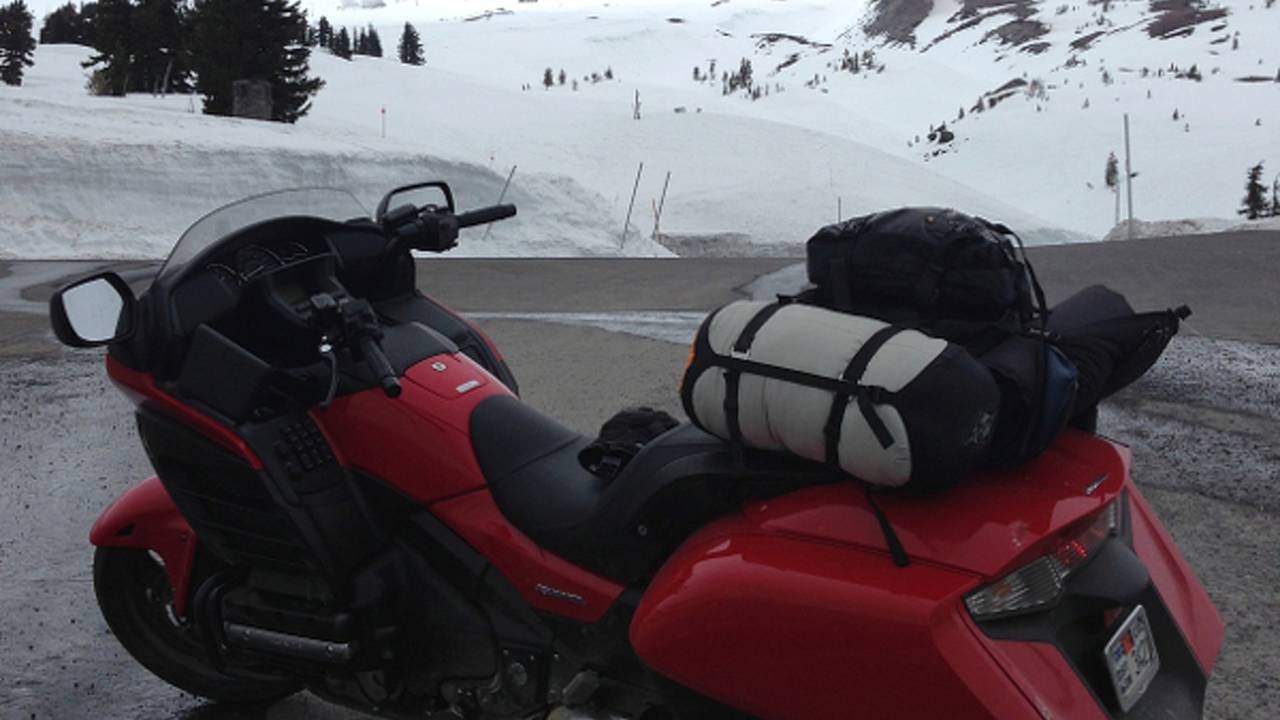 Back down the hill, I stayed on Hwy 26 toward Madras, where it intersects with Hwy 97. The pine trees and mountains quickly turned into rolling hills and oak trees and then into grassy plains, with Mount Hood still completely visable in the background. Again, I had found "the most beautiful scenery on the trip." I was beginning to think I had finally covered all of the types of landscape I would see on this trip until I got close to Warm Springs and saw a canyon between the road I was on and the one assumed I was heading towards. Down the huge red rock walls, across the Deschutes River, and back up the other side; the road was all too brief and left me wanting to stop and enjoy the view but it was finally time to start thinking about getting to my destination. 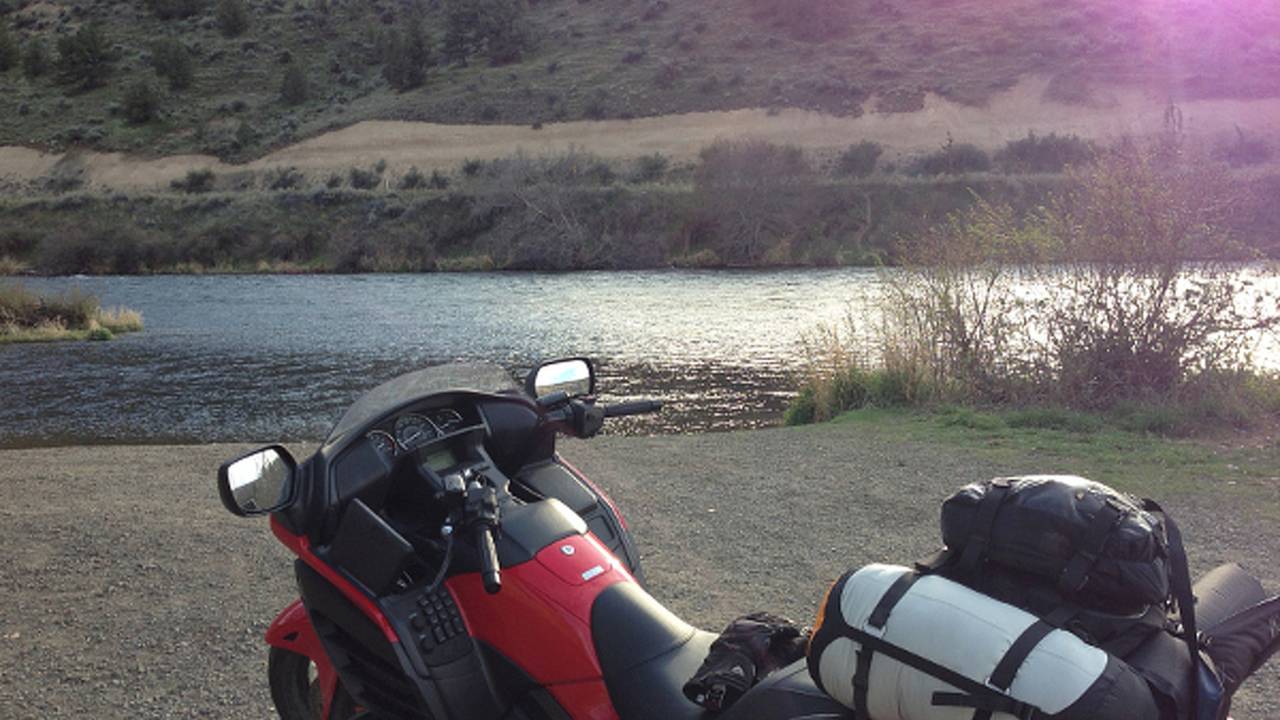 I was determined not to make the same mistake I had my last night camping alone and go to bed hungry and figured Bend would probably be the last place to get a decent meal. I got into town around sunset and am kicking myself for not stopping to find somewhere along the river that snakes through downtown to take a photo, but by this point I just wanted to eat and keep going.

Bend Brewing Company seemed like a safe bet and, while fine for my purposes, I would recommend trying a little harder to find something better should you have the time and energy. By now I was used to the weird looks I received from sitting at a large table with armor and my gear strewn about either shoveling food into my face or zoning out while enjoying a warm room and lack of a helmet. My phone told me the temperatures were dropping quickly and, once again, that I had far longer left on the bike than I would have thought and I was on my way. 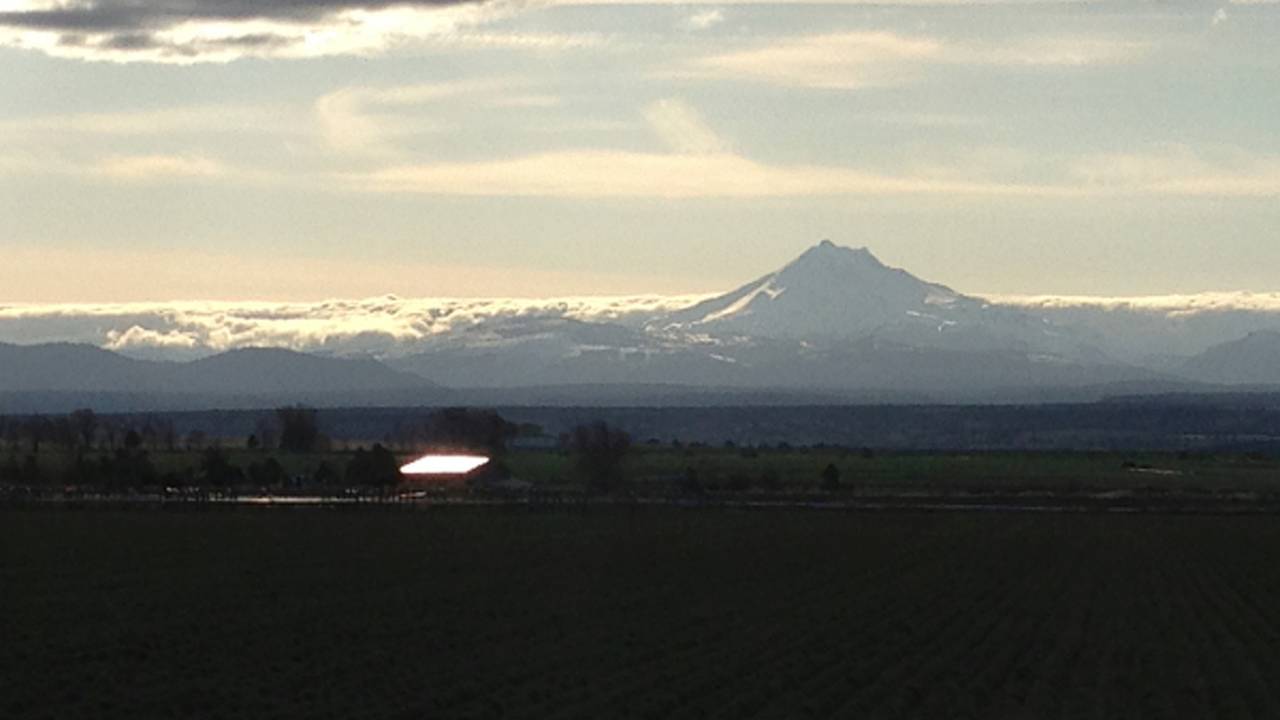 My original plan was to camp near Crater Lake since I heard it was beautiful and I'd hoped to be able to see it in the morning. I arrived at the site around 10:00pm and, with temperatures in the high 30s and a locked gate, I wasn't going to be able to get around, I got back on the bike and prayed I'd be able to find another site relatively close I could stop at. Luckily I found a little site 20-30 minutes later, just north of Klamath Falls, where I was able to squat for the night.

There was another group of 2 or 3 guys there and I have to admit, camping alone became a whole lot less fun when I realised that there was literally nothing I could do but hope no one was going to mess with my bike or gear. I put as much of the gear as I could in the lockable panniers or my tent, prioritizing with what I would need to ride out as the most important and the stuff I would hate to replace but could live without as the least. Note to self for next trip: be less of a sissy, go with a friend, or make sure to camp at open sites with more people present.

Fortunately, I woke up with all of my belongings where I left them and before anyone else seemed to be up and was able to pack up and leave without any hassle. The temperature had dropped below freezing through the night and there was a decent layer of frost on my Kriega luggage and tent, which made packing it up pretty painful and froze my hands pretty thoroughly but I was quite happy to be back on the bike and making progress. It was too foggy to see much of Klamath Falls, but the fog broke near the California border (a nice welcome from my home state) with a perfect view of Mount Shasta. 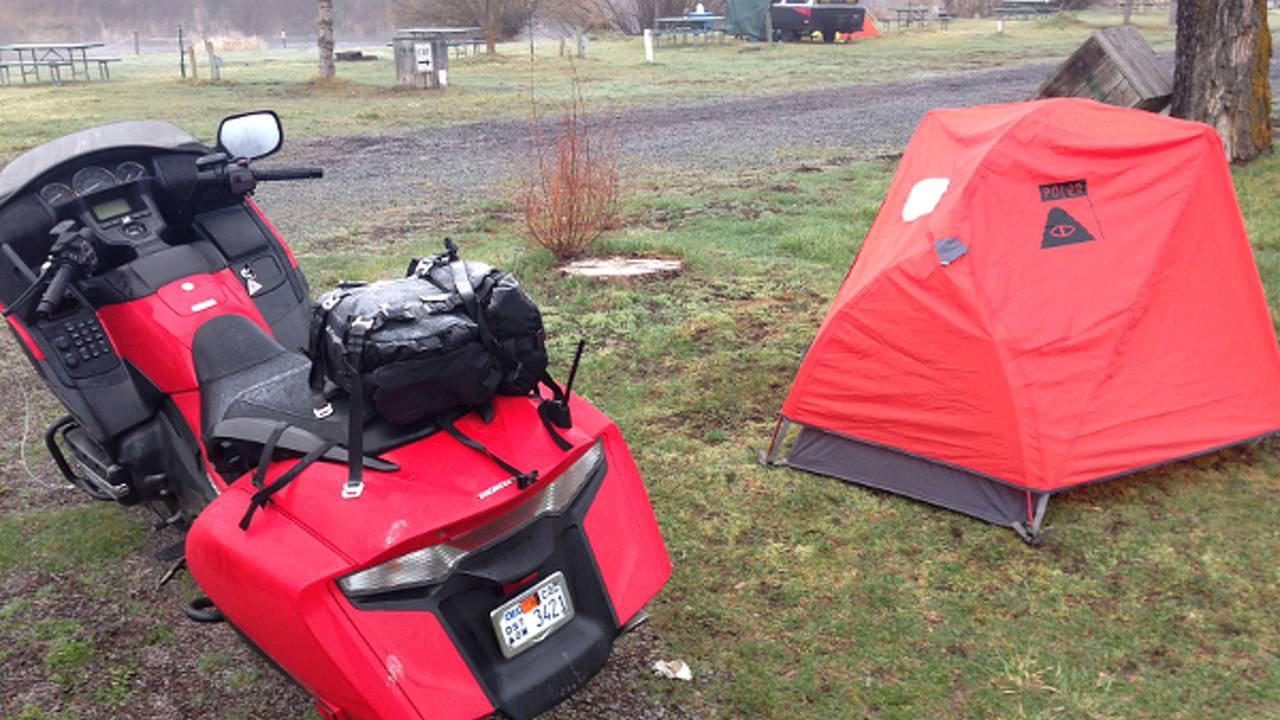 Hwy 97 runs around the north side of the mountain, through a pass of 5,000 feet or so, which brought on another beautiful change of scenery. The red pines look like those in Tahoe near where I grew up, which led to an even greater feeling of heading home. I connected with I-5 in Weed, California and made it to Redding before stopping to rest. It was about 80 degrees in Redding, a sharp contrast from the 35 it had been when I left Klamath Falls and it felt odd to be sitting outside a starbucks on a hot day, sipping an iced latte, after waking in a freezing campsite and then riding across a mountain.

My mom lives in Rocklin and, while I would have normally taken I-5 to her house from Redding, I opted to take Hwy 70 through Chico and connect with Hwy 65 through Lincoln. I never spent much time in this area growing up, but the orchards lining the roads through this area are very similar to the ones I grew up near seemed all too appropriate for the last hour or two of the days ride that would end at my mother's house. Made it home by mid afternoon and spent the rest of the day raiding the pantry and enjoying the beer that always happens to only find its way into the fridge when we come home to visit. 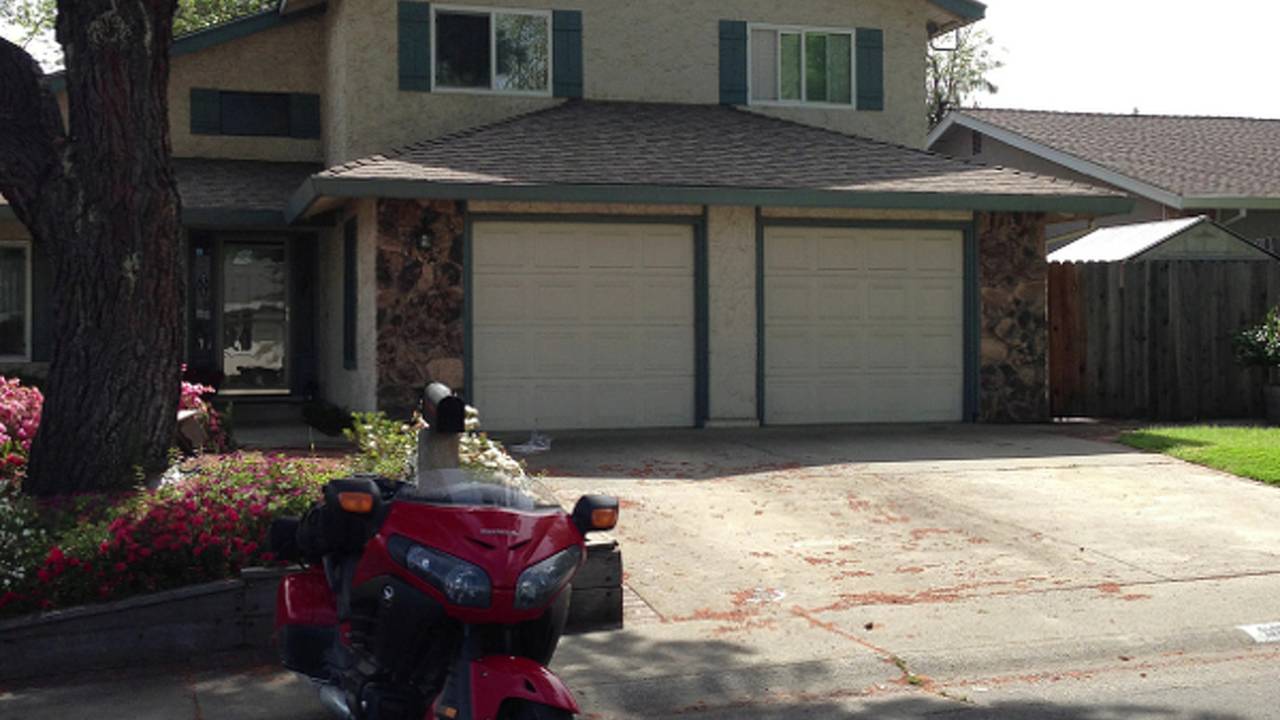 The suburbs never looked so good

I woke the next day with the intention to ride to Yosemite to camp for the night. The weather report said it was going to rain pretty heavy for most of the day and, with Yosemite only 3 hours away, the idea of spending 12 hours in Yosemite in the rain by myself sounded obnoxious. I decided to try and beat most of the rain and just head home. It began to sprinkle as I left the house around 7:00 am, but I was confident I would be able to miss the worst of it and that my gear would handle the rest. Cut to an 60 miles and an hour later at a gas station in Galt off Hwy 99 where I sat completely drenched trying to decide what to do. I'll get to more of this when I review the gear, but my suit did not hold up as I'd hoped and I decided to turn around and go back to Rocklin and try again later.

Another hour on the road in the rain and I was really wet and cold when I finally got back to my moms house. I pulled apart all of the layers built into my gear, pulled all of the armor out, and stuffed the suit and my base layers into the dryer. I text anyone who would be expecting me back in LA that day that I would be another day and conceded that the rest of my day would be spent on the couch. After a few hours watching anything on the DVR and eating all the treats in the cupboards, I was happy to find my gear pretty much dry. I decided I couldn't that, with the DVR empty, daytime television would be worse than doing another 450 miles after wasting 120 on my first attempt to leave. I packed up as quickly as I could, found a decent break in the weather, and was back on the road by 2:00pm.

Interstate 5 is actually kind of pretty during the spring time, even more so with a storm coming in behind you. The road is long and straight and boring but left me to develop a little game I like to call "find the CHP hiding spots." Before you freak out in the comments, I'm wasn't riding at crazy or unsafe speeds, I kept it in the low 80s; just fast enough to feel like I would make good time and to make my heart skip a beat when I failed to drop down to the low 70s when passing a blind area. The game was for more about keeping my mind active and off of numbers and not trying to break any speed records for the trip. 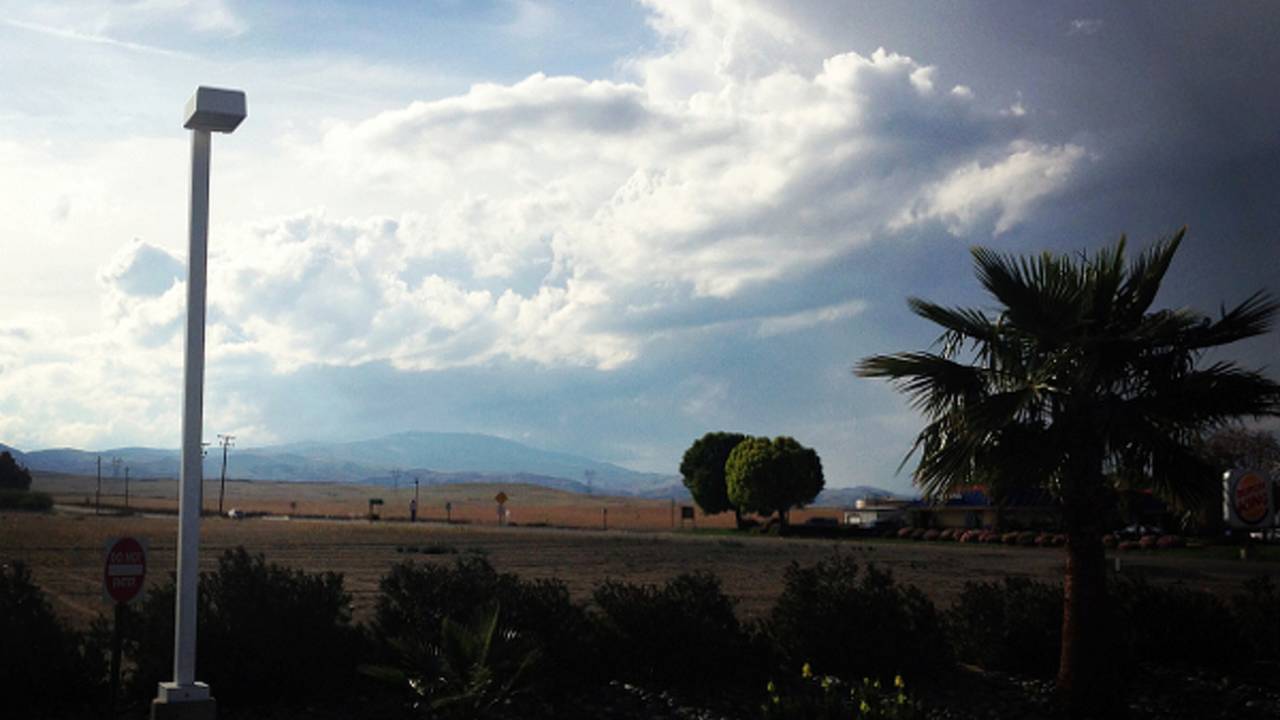 This storm chased me down I-5

I hit the grapevine a little before sunset (the only other photo opportunity I'm really bummed about not taking the time for), was back crossing freeway exits I use on a regular basis by the time it was dark, and was on track to be home right around 8:00pm. With all of the great food I'd had on my trip, the one thing that's lacking in the Pacific North West is mexican food. I used my Sena SMH10 to call my favorite spot, picked up a plate of tacos to go, and was inside my apartment with gear strewn about the floor, a face full of tacos, and an open beer 10 days, 12 hours, 30 minutes and 2,952 miles after I had departed.

The unpacking could wait another day. Below is my route. Pick a destination, plan your route, and go ride.