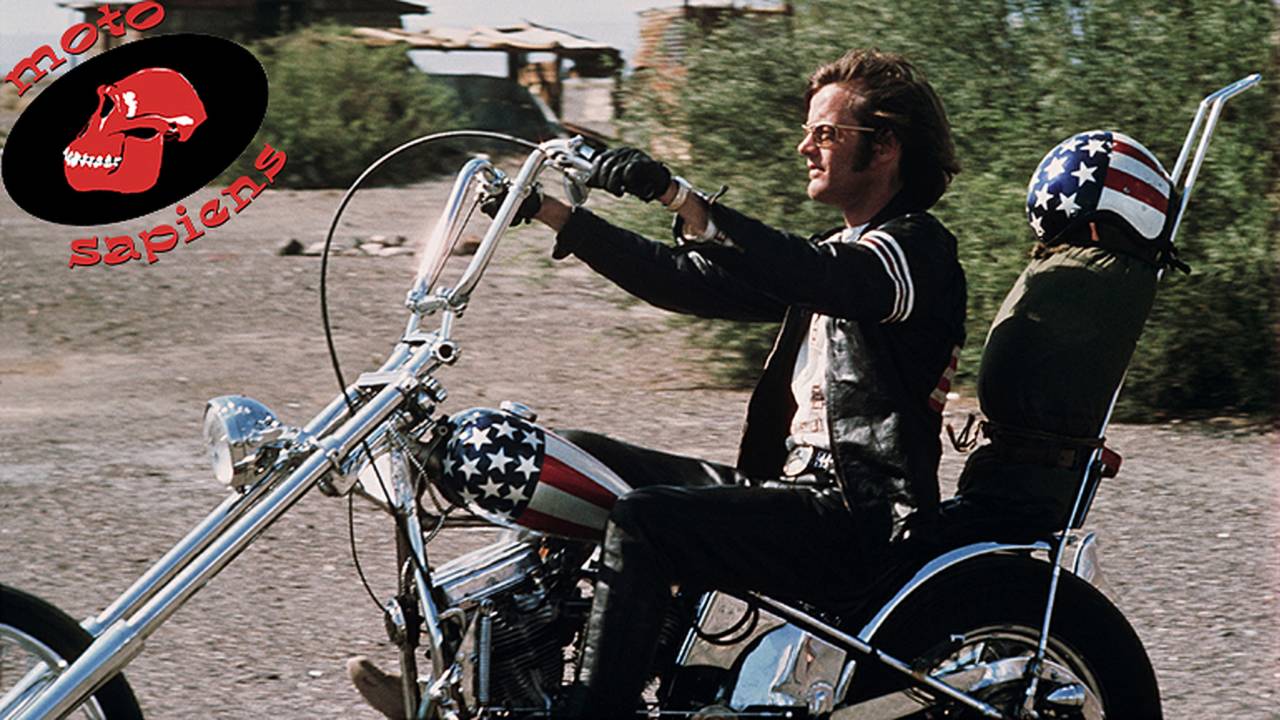 Bikers, Patriotism and Righteous DissentBikers have always had a strange relationship with patriotism. Some of the most anti-establishment biker...

It was maybe 1981. There was this guy who worked at my father’s nursery – a lanky guy with a stringy George Thorogood haircut and an Ironhead Sportster. That bike was probably the most valuable thing he owned. He worked outside in the fields or in the smothering heat of the quonset huts all day and wasn’t that interested in talking to a little kid. I seem to recall he had once worked as a deck hand on a Great Lakes freighter, so let’s call him Freighter Dave. The only protective gear Freighter Dave wore on his bike was aviator sunglasses and engineer’s boots. His Sportster had a sissy bar and straight pipes – absolutely no baffles.

At that point in my life, the loudest thing I had ever heard were the jet funny-cars at Thompson Drag Raceway, but this bike came a close second. It was shockingly, frighteningly, wonderfully loud. Freighter Dave said it was “the sound of freedom.” I thought he meant because it was made in America. I knew we didn’t like “Jap” bikes, so I took this as a simple, straightforward statement of patriotic loyalty. It didn’t occur to my eight-year-old brain that Freighter Dave was not exactly the rah-rah America type.

That comment about “freedom” stuck with me, maybe because it was one of the few things Freighter Dave actually said directly to me. Later, I thought it meant that he felt free and in control while he was riding, when the rest of his life certainly had few luxuries and few choices. It wasn’t until decades later, in a moment, that I realized what it was about.

He was talking about righteous dissent.

This is summed up perfectly in the image of Peter Fonda’s “Captain America” bike from Easy Rider. Here is this character, this anti-super-hero, striking away from society’s expectations, a new pioneer, with the flag on his tank. Of course, he runs up against “real” American society, with terrible results. A sociologist might say he “appropriated” the flag “iconography” in order to “re-invent” or “re-interpret” it, but I say that’s where it was meant to be all along. The spirit of righteous dissent is essential to the American spirit. Without it, there is no Thomas Jefferson, Frederick Douglass, Mark Twain, or Woody Guthrie. It’s something you don’t hear in Lee Greenwood, but you do hear something like it in Elmore James. It is what makes America unique... or at least what makes America interesting.

We are the nation of the Whiskey Rebellion. Right after we had a revolution and formed a shiny new country, a bunch of farmers and distillers took up arms against our very first administration over whiskey taxes. Many of them were even veterans of the Revolutionary War. You have to love a bunch of nuts like that.

Our culture is bursting with great examples of dissent. Every “great American novel” is a book that is critical of our society, and we celebrate them for that very quality. From The Last of the Mohicans to The Scarlet Letter to Moby Dick, Huckleberry Finn, The Jungle, The Great Gatsby, A Farewell to Arms, To Kill a Mockingbird, The Naked and the Dead. It is a canon of malcontents!

This is why I believe Rocky I is a more genuinely patriotic movie than Rocky IV. It’s why the most credible rendition of The Star Spangled Banner is by Jimi Hendrix. Once you hear his “rockets red glare,” when you can’t tell if you’re hearing celebratory fireworks or a shitstorm of missiles raining helldeath out of the sky, every other version of the national anthem will just seem boring. This is why Abbie Hoffman wore that American flag shirt. This is why we love the First Amendment so much. Think about it: you don’t need an amendment to protect inoffensive speech. You don’t need it if everybody agrees. The only reason to have it is to protect offensive, unpopular, outsider speech. It is our license to dissent. Our license to be a crackpot.

I think we are in danger of losing this spirit of righteous dissent and becoming boring. Patriotism is becoming too narrowly defined. At the end of Fear and Loathing in Las Vegas, Hunter S. Thompson talks about reaching a high water mark in the 60s, and seeing the tide recede, sliding into apathy and complaisance. I don’t think we’re apathetic, but bumper-sticker love of country is too easy and lazy. Patriotism now seems to mean supporting a particular agenda. We have plenty of partisan bickering, but no real dissent. It’s morbid compliance. Biker-style patriotism is anti-agenda, and we need to spread more biker-style patriotism.

Most people who ride are good, normal citizens – squares. That’s fine; we love bikers from all walks of life – I don’t hold to that “real biker”/”not real biker” thing. But whether you’re a nursery worker, a high school teacher, a dentist, or even (ugh!) an architect, when you get on your bike, you know deep down that you’re tapping into something dangerous. I don’t mean physically dangerous, I mean a dangerous idea. You are hearing Thomas Jefferson tell you, “A little rebellion now and then is a good thing.” This is something that emanates from core biker culture, and it’s good. It feels good. We need it.

I don’t know what happened to Freighter Dave. He would only be about 55 or so now, so I hope he’s still riding. I wonder what he’d think if he knew I spent so much time thinking about his comment. I know he wasn’t thinking about the Whiskey Rebellion or Upton Sinclair when he said it. All these connections are just my own ramblings, but as I try to look past all the sameness around us, the chain restaurants, reruns, pop anthems, cars that all look the same, the neighbor’s leaf blower, and all the fucking parking lots, when I look for what is awesome, inspiring, and uniquely American, I always come back to this common theme of restlessness, rebellion, and dissent. I’m always listening for the sound of freedom.