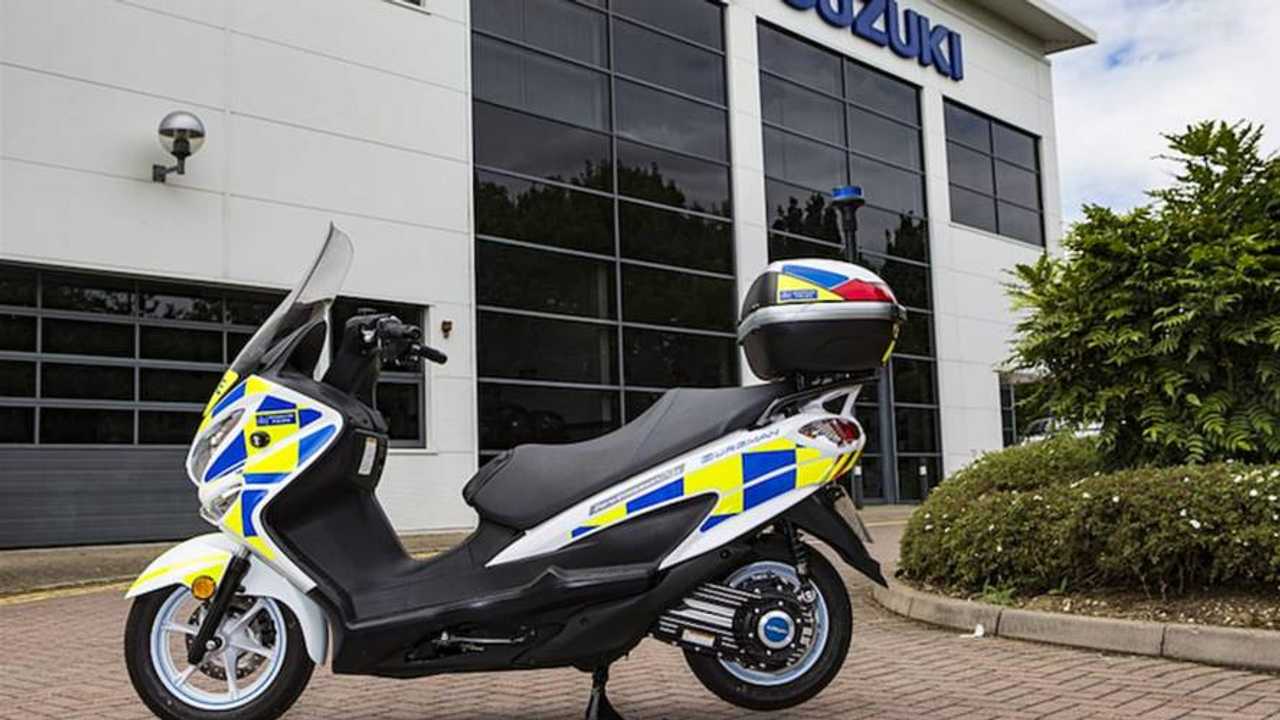 London’s police force - often referred to simply as “the met” - is rolling out a small squad of hydrogen-powered Suzuki Burgmans (Burgmen? -Ed.). Although there are only seven scooters involved in the trial, this is the beginning of a monumental shift towards clean energy for one of the world’s largest police departments.

“Being the UK’s largest police service, we constantly have vehicles on the roads and therefore it is our aim to make our fleet as clean as we can, whilst maintaining operational capability,” said Commander Neil Jerome for Territorial Policing.

One of the reasons why Suzuki’s Burgman model is a logical choice for the Met is that the hydrogen-powered scooter is the first fuel-cell vehicle to get European Whole Vehicle Type Approval, enabling its mass production. On top of that, the maintenance and fuel costs for this trial will be taken care of by a collaborative project that’s partially funded by the Advanced Propulsion Centre (APC). Intelligent Energy - British fuel cell technology company - is the lead partner with Suzuki Great Britain for this trial-endeavor.

Aside from its fuel-source, the Burgman isn’t a particularly special or noteworthy two-wheeler as many reviews demonstrate. The mere fact it could cut down on an enormous amount of pollution when you consider the Met employs over 30,000 officers (plus another ten-thousand employees and almost ten-thousand volunteers), it becomes a much more appealing, justifiable, and worthwhile option.

“Suzuki are extremely honored to be able to showcase the Burgman Fuel Cell and gain valuable feedback from this important trial with the Met, said Nobuo Suyama, Suzuki GB Managing Director. “Operational data from the trial will be gathered and used to support Suzuki zero emission vehicle development programs."

Suzuki set out to bring some of the best of the best on board for the project instead of keeping the high-tech endeavor completely in-house.

“Deploying these vehicles into service with the Met marks a significant milestone in the extensive development of this ground-breaking technology.  Being able to release the Suzuki Burgman Fuel Cell to the Met has only been made possible by the support of a number of technology partners; including Intelligent Energy Ltd, with whom Suzuki has jointly developed the fuel cell unit for the scooter,” explained Suyama.

If this trial is successful, maybe the Met can use their shiny new fleet of hydrogen Burgmans to catch all those scooter hoodlums terrorizing the city.