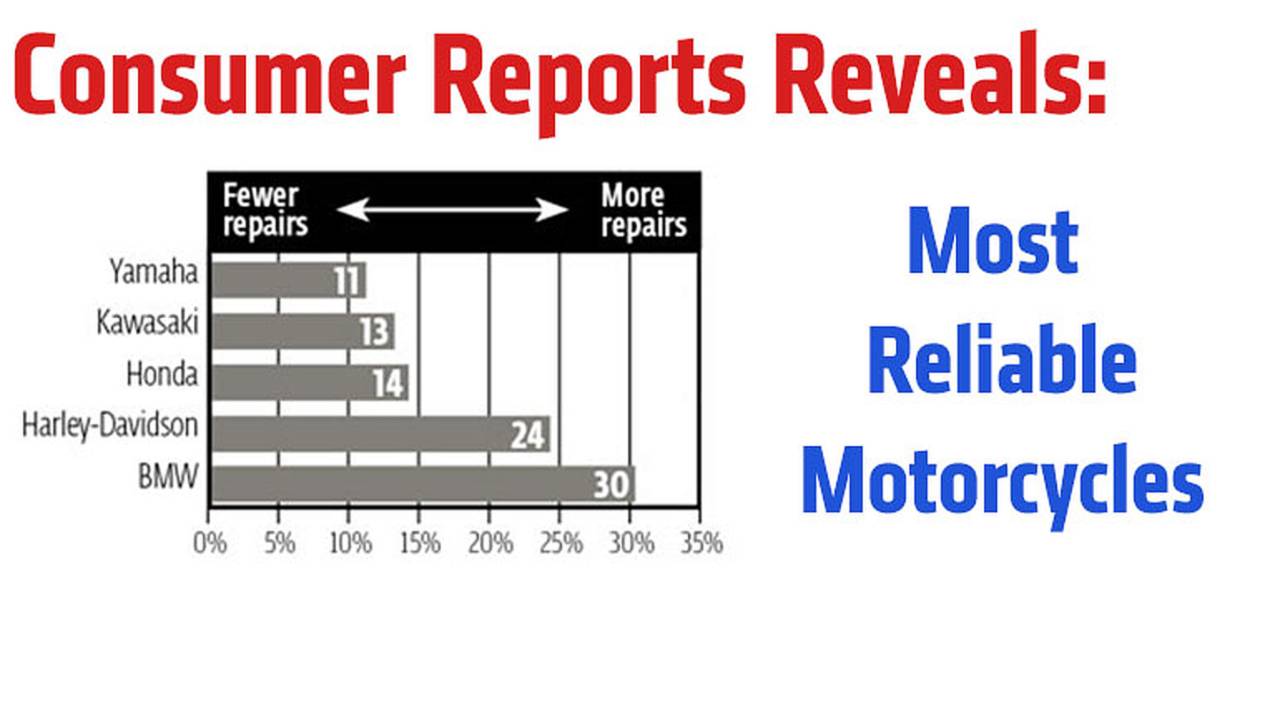 Which bike brand will give you the least problems? Consumer Reports reveals the most reliable motorcycles.

In its first ever research into national motorcycle ownership, Consumer Reports has looked at bikes built between 2009 and 2012 and found varying quality amongst the brands, which saw first place finisher Yamaha almost six times more reliable than the worst performer, BMW. These are the most reliable motorcycles.

Motorcycle owners and subscribers to CR were asked to submit information about serious problems or repairs they had experienced with their motorcycles over a four-year period. The information that was supplied only covered five brands in significant depth – Yamaha, Kawasaki, Honda, Harley-Davidson and BMW.

Around a fifth of the 4,680 motorcycles suffered from a serious issue. Yamaha motorcycles were the best performing, with one in 10 bikes having a problem, that ranged to one in three for BMW and about one in four for Harley-Davidson.

CR, which traditionally looks at cars and appliances rating the products accordingly, published its findings on motorcycles last year after studying all of the data on motorcycles, which was supplied by 4,424 of its subscribers.

Of the major motorcycle brands represented in CR’s data, only Suzuki and Triumph were not properly represented by a significant sample size. However, CR says that the responses it did receive suggested that Suzuki motorcycles were as reliable as other Japanese brands, while Triumphs were below average.

The survey also revealed that reliability can vary significantly between types of bikes. Owners of touring models had the most problems at 27 percent. That was followed by dual-sports at 23 percent, sport touring at 19 percent and cruisers at 16 per cent. There wasn’t sufficient data available to rate sportbikes, but the information that CR did receive suggested they were about as reliable as cruisers.

Most of the problems that owners encountered with their motorcycles were, in general, inexpensive to repair with only three percent having trouble with the cylinder head or valves, or with the crankcase, crankshaft, or pistons. Likewise, only three percent needed transmission repairs, although seven percent had clutch problems.

The biggest problem that owners experienced were issues with lights, instruments, switches and radios (21 percent); brakes (20 percent); the electrical system (16 percent) and fuel systems (15 percent). In the last category, CR said that its experts felt that fuel system problems may be due to improper storage of motorcycles during the winter.

75 percent of all repairs reported to CR cost the owners less than $200 to fix and about two-thirds of the repaired bikes were back on the road within a couple of days.

Despite the higher number of problems, Harley-Davidson and BMW owners told CR that they were among the most satisfied with their bikes. When asked whether, considering everything, they would buy their bike again if they had it to do over, 75 percent of Harley-Davidson owners said definitely yes, closely followed by 74 percent of BMW owners and 72 percent of Honda owners. By contrast, only 63 and 60 percent of Yamaha and Kawasaki owners, respectively, were as emphatic.

CR said that, in its car owner satisfaction surveys, models that generate enthusiasm —including sports cars and fuel-scrimping hybrids — tend to do the best in this subjective measure.