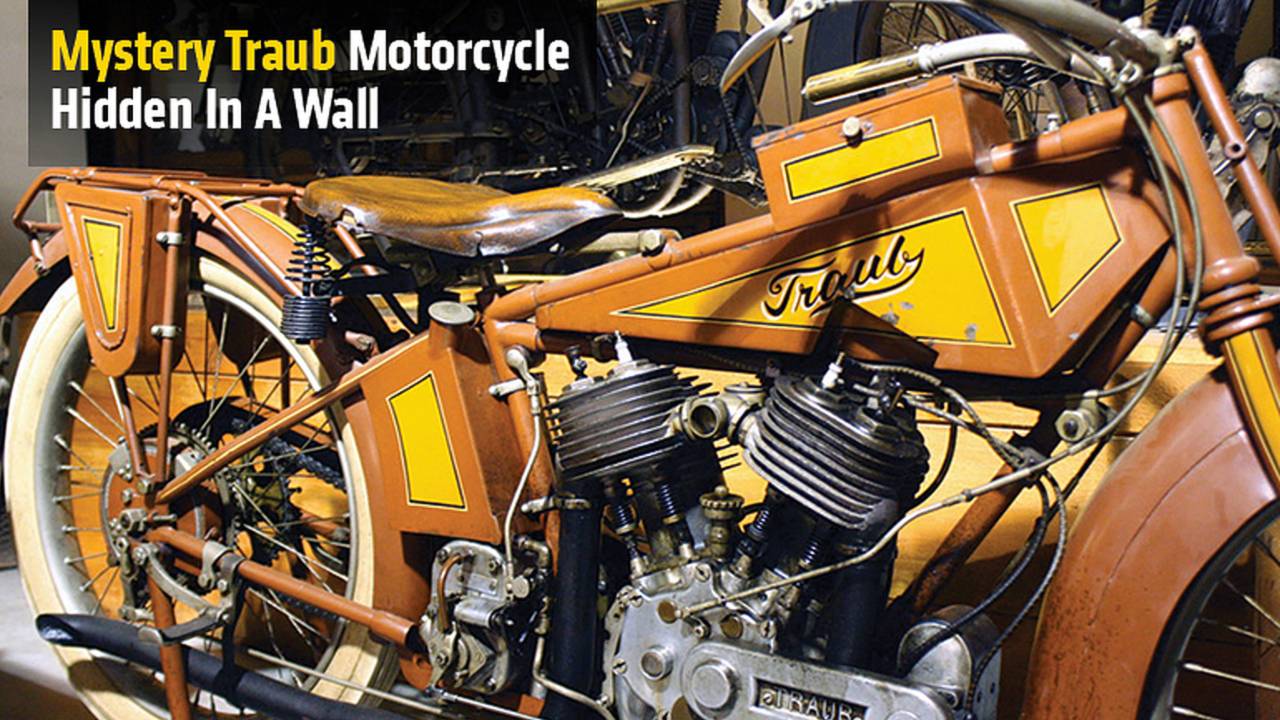 The mystery Traub motorcycle still produces more questions than answers to this very day. Now displayed at the Wheels Through Time Museum in North Carolina.

Imagine doing some home improvements to an old apartment building, knocking down a wall and finding a complete one of a kind motorcycle completely untouched for more than 50 years.

Back in 1967 a plumber was doing some renovation work to a building in Chicago and discovered a complete 1917 motorcycle with the unusual name of Traub on its tank. The building’s elderly owner admitted that his son had stolen the motorcycle before going off to the First World War, only to never return. But where the motorcycle came from, who built it and why it was walled up in an apartment building is still a mystery today.

The mystery Traub motorcycle is currently on display at Wheels Through Time Museum, in Maggie Valley, North Carolina, which is considered to have one of the best collections of vintage American motorcycles anywhere in the world. But experts still, even to this day, do not know who built the Traub or where in the U.S. it was produced.

After its discovery the Traub was sold to Bud Ekins (who worked as Steve McQueen’s stuntman) in the 1970s. Later it passed through the hands of several collectors before Dale Walsker, curator of the Wheels Through Time Museum, purchased it in 1990 and where it’s now on permanent display.

The Traub is no ordinary motorcycle. Almost every item on it has been engineered and manufactured specifically for this bike. There are no shared components from any other motorcycle of that era. The pistons are hand made and have gap-less cast iron rings and much of the engineering and machining is years ahead of its time.

The v-twin engine is unique to the Traub and is a sand-cast, hand-built, 80 cubic-inch, side valve, motor, while the three-speed transmission is thought to be one of the first of its kind. The rear brake set up is also unique and consists of a dual-acting system that employs a single cam that pushes an internal set of shoes, while pulling an external set.

The question of who designed the Traub, where the parts were made and by whom and why it ended up for years inside the walls of a Chicago apartment block may never be known.

But if you are in North Carolina it’s well worth a visit to the Wheels Through Times Museum to see what maybe the world’s rarest motorcycle and more than 300 other vintage and classic American motorcycles that are also on display.