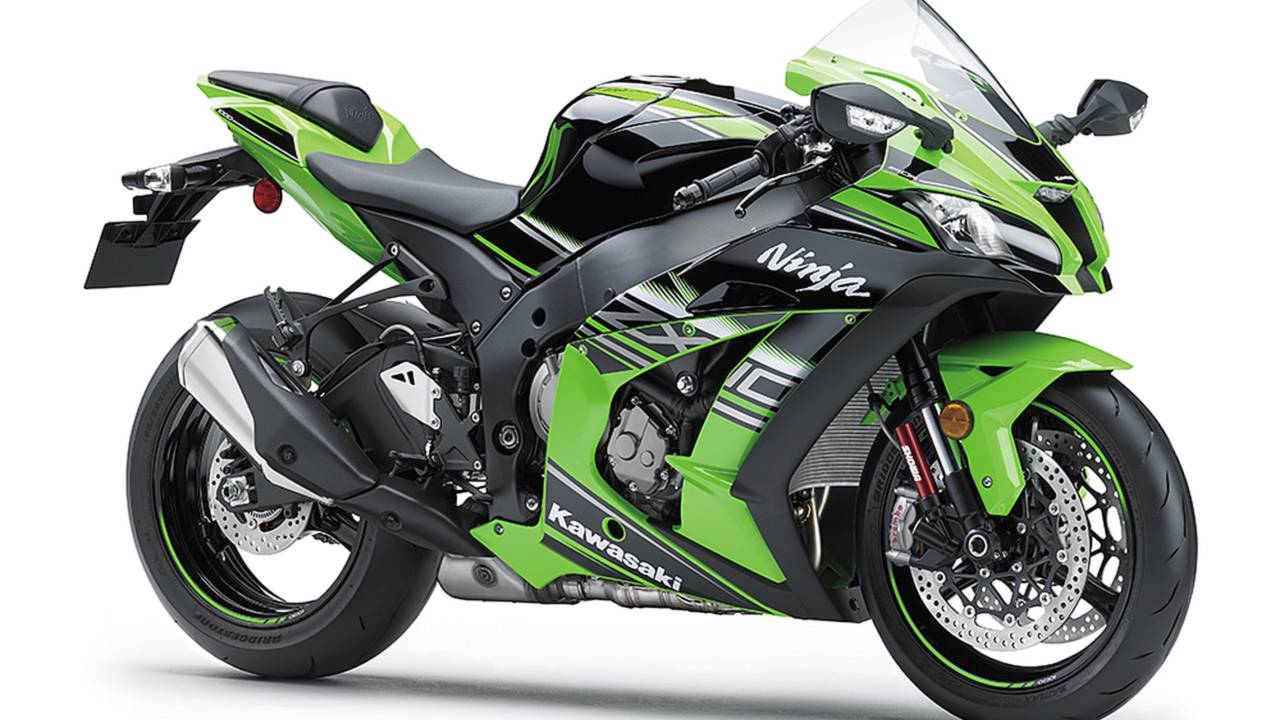 It’s no secret that Team Green kicks ass on the race track. The Kawasaki Ninja ZX-10R ABS has done well in the World Superbike Championship for a few years – finishing second in 2012, first in 2013, and second in 2014. Right now it looks like they may take the 2015 Riders’ Championship, as well as the 2015 Manufacturers’ Championship titles too. Naturally, Kawasaki decided to put all of the track tech and know-how into their latest big boy street bike by introducing the new 2016 Kawasaki Ninja ZX-10R.

Not to be outdone by the R1/R1M, Kawasaki claims: “The 2016 Kawasaki Ninja ZX-10R ABS is the highest performing, most track-focused sportbike available today for homologated racing use.” Will it beat out the liter-bike competition? It’s quite possible based on the long list of improvements.

There’s some H2/H2R tech featured on the bike, but nothing earth shattering like a supercharger. For instance, it has the same sensor for the quick shifter, as well as a similar fender and the same tires. The coolest shared piece of them all is the Kawasaki braking control, which was introduced on the H2.

To the non-sportbike rider, the Ninja ZX-10R doesn’t look that different. We accidentally saw the bike in person while leaving the Kawasaki headquarters a while back, but didn’t spot it as the new model. It was making laps in the parking lot as our group exited. It was far away in the lot and facing us, so I was only able to make out the headlights. But despite the mostly similar look, what’s underneath is drastically different.

For starters, the neck is 7.5mm closer to the rider, shifting weight back into the bike. Out back, the swingarm is lengthened by 15.8mm, resulting in a wheelbase of 56.7 inches, which is almost 1/2-inch longer than the previous model. The swingarm also features new bracing so it's stiffer.

But what we really care about are the power numbers.

The former generation made 165 horsepower at 11,600 rpm and 76 foot-pounds of torque at 11,100 rpm to the wheels. That’s around 180hp, give or take, to the crank... here in the States. Overseas the ZX-10R makes just north of 200hp. Will these huge changes beat out the new hp kings (present company excluded, aka the H2/H2R) R1 and S1000RR? Shoving the ZX-10R into that glorious 200-plus range would put Kawasaki back on top—standing on the podium next to themselves of course.

It’s possible the new engine, in the States, breaks the 200hp mark, but if that were the case we’d hope Kawasaki would lead with that during this Ninja ZX-10R unveiling. So far we haven’t seen any numbers.

The new four-banger has tons of big improvements, which mostly result in more top-end power with some added corner exiting goodness. There’s also the possibility of a higher rpm redline, but that’s not official (the press release felt like it was hinting at that.)

It’s still the same over-square 76mm x 55mm bore and stroke 16-valve, DOHC, inline four-cylinder as before, but now with a lighter crankshaft and balancer and a beefier engine block. The cylinder walls are thicker too. The connecting rod journals have a new coating, which doesn’t seem like much, but if you ask someone who builds NASCAR engines, coatings are the secret to generating and keeping power. Kawasaki made an emphasis on a handful of areas that feature new lubricants and coatings.

Up top there is more direct intake and exhaust porting. And unlike previous models, where only the intake ports were polished, the exhaust ports are now polished as well.

The combustion chamber has a new shape with 1mm bigger titanium exhaust valves—all for that top end power. With the new intakes comes a new cam with more overlap, again for more top-end power. A new cam-chain tensioner is also installed.

The Ninja has an all-new cast, and the alloy pistons which are lighter weight and feature increased durability. A shorter skirt reduces the weight by 5g per piston.

A bigger engine means you need a bigger intake, so Kawasaki increased the surface area of the filter by 60 percent and the intake box is 25 percent bigger than before. The throttle valves are electronically controlled, which Kawasaki says aids in the seamless integration of the electronics like launch control, etc. Same as on the H2.

The close-ratio transmission has gotten even more close-ratio, 2-6 gears are tighter for better corner exit. A thinner primary gear allows for a lighter (130g) slipper clutch. A new dry-film lubricant coating has been applied to certain gears, which is supposed to reduce internal friction and improve shifting speed. The Kawasaki Quick Shifter only works on upshifts and utilizes the same sensor as found on the H2.

One cool function of the Ninja’s electronics is the Cornering Management. When you’re deep into a corner and begin to apply brakes, it works similarly to the Bosch cornering ABS system where it keeps you in the corner while braking. When you grab the brakes, it slowly adds pressure where it wants, depending on your lean and pitch angle. It uses the five-axis IMU and Kawasaki’s original chassis attitude software to keep you leaned over when applying the brakes.

Introduced on the H2 last year, the engine braking system is controlled by an on/off switch that engine-brakes your bike when you shut off the throttle.

While you won’t find R1M-level electronics with the suspension, you will find some trick, performance stuff like the Showa Balance Free Fork (BFF) for the Ninja. This is the first mass production version of what’s previously been restricted to World Superbike competition. When Kawasaki says the bike has WSBK influence, they aren’t kidding. The basics of what makes this suspension so special is the separation of chambers in the forks, making the suspension more consistent, more responsive and adjustments more noticeable.

Kawasaki USA is very tight lipped about anything to do with power numbers. When the Ninja has the RAM air effect (aka at speed) made 207hp and 200hp without, but the European website has not updated the hp and torque figures, they're almost identical to the previous models, which means something isn't right? There's no way with all of these changes that the bike didn't make more power, but it's not totally worked out as to how much power the bike will make. Are they sandbagging?