Every season means a new unveiling of cool gear. Not all manufacturers unleash new lineups every season, but this year a handful of companies showcased gear that will make this fall awesome.

There seems to be a trend towards casual-looking motorcycle apparel. Both ICON and Alpinestars released hoodies with riding armor. At the same time, there are more advances in movability for racing suits and jackets. Rather than show you the press release from every manufacturer, we decided to show you our favorite of the recently released gear.

For Fall 2014, Icon is releasing their Hypersport Prime and the Overlord collection. Both use multiple materials in their construction, and the Overlord Collection takes that a step further by combining as many as five materials to give flexibility. 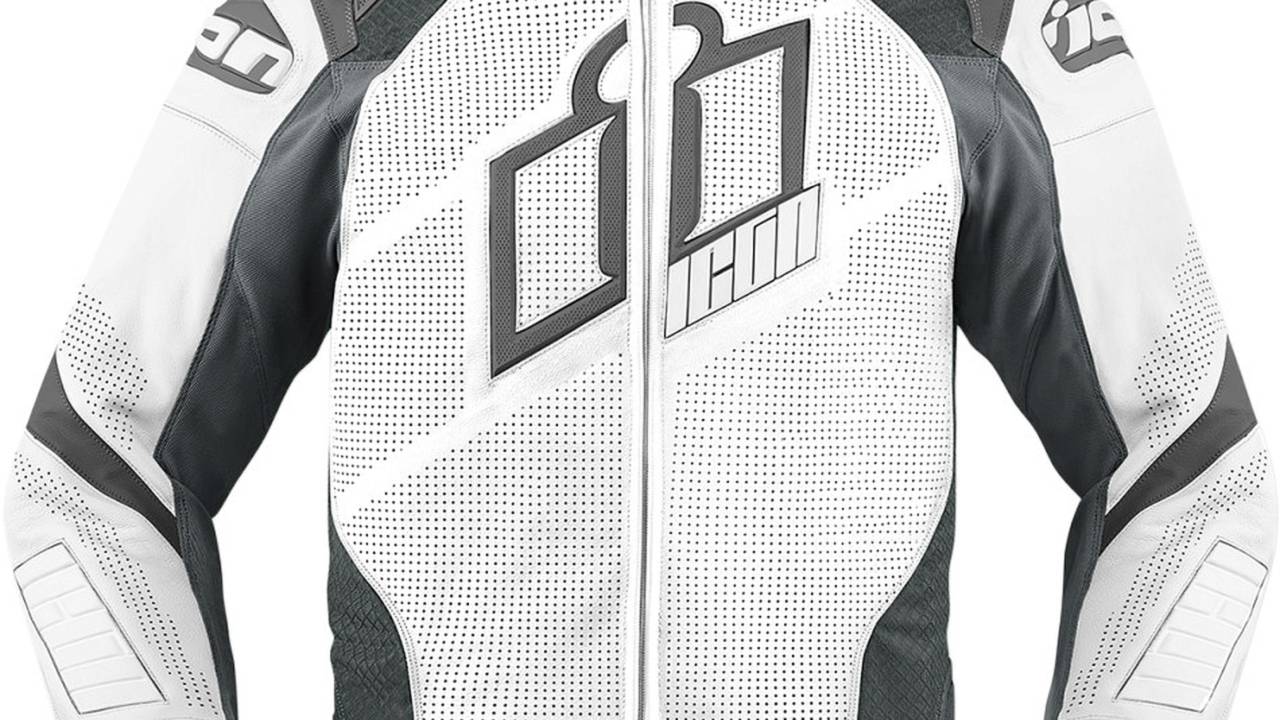 The Icon Hypersport Prime jacket starts at $365 for suggested retail.

That's a lot of materials used to make any apparel, much less a riding jacket, but each material is said to be chosen for its innate ability. Things like special leather in movement areas and newly designed cuffs and neck areas provide a better fit, and the jacket has built-in ventilation in the back. We hope that these are the best materials to place together for maximum protection while providing multi-season comfort and unmatched durability. 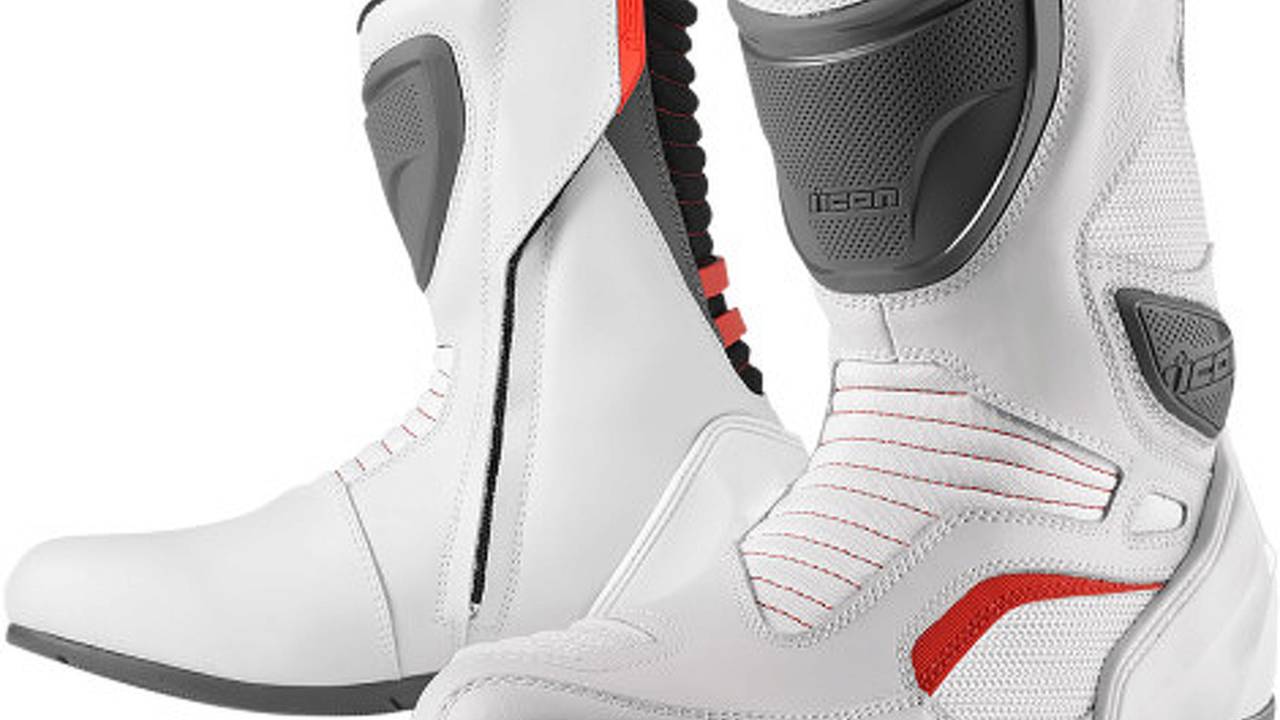 Also with the Overlord collection are these shiny new boots that retail for $175.

The ICON 1000 collection has been possibly the most stylish and well-rounded line up of motorcycle gear we’ve seen. Anything in the line can be worn on almost any style bike without looking too out of place. 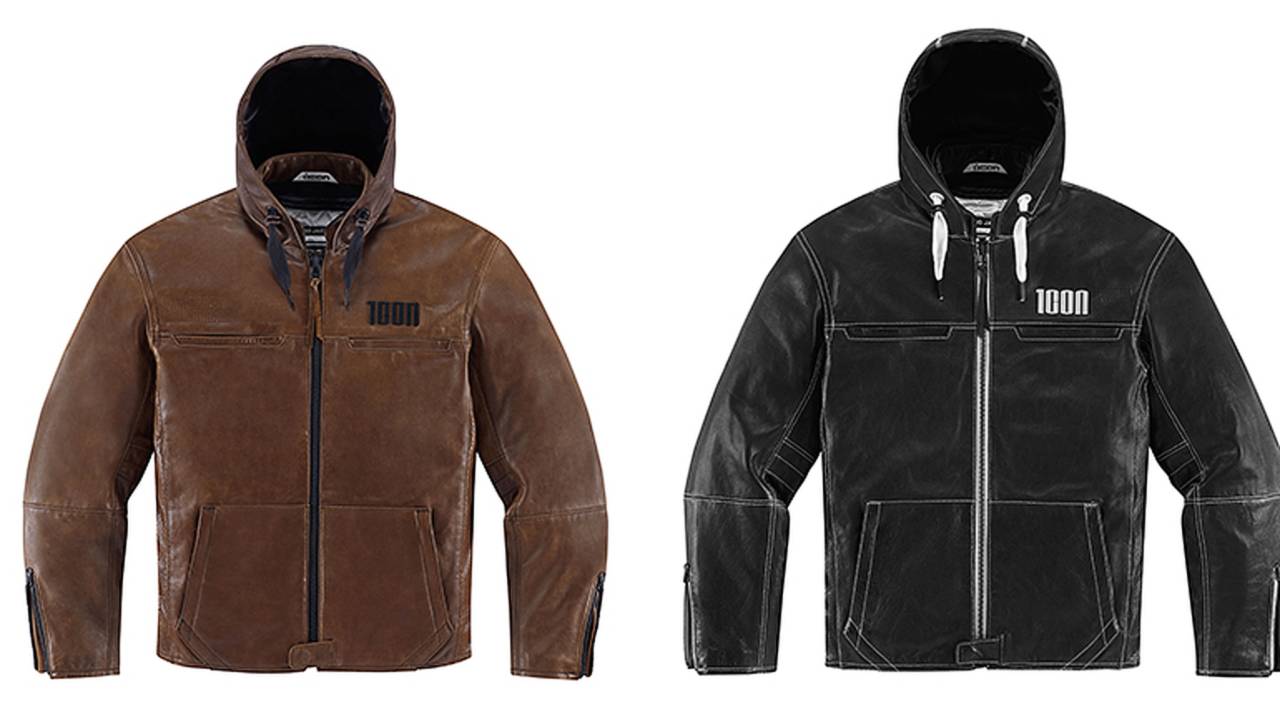 The Icon 1000 leather hoodie is pricey at $600, but has immense detail and includes armor.

Added for the fall are the Hood for men and the Fairlady for women. Accompanying the new jackets are the Prep and Fairlady glove, along with two new boots, the Prep boot and Eastside boot. The Prep boot resembles the Icon Elsinore boot, complimented with waterproof lining. We are a big fan of the Elsinore, so adding waterproofing is a really nice upgrade for what appears to be similar pricing. 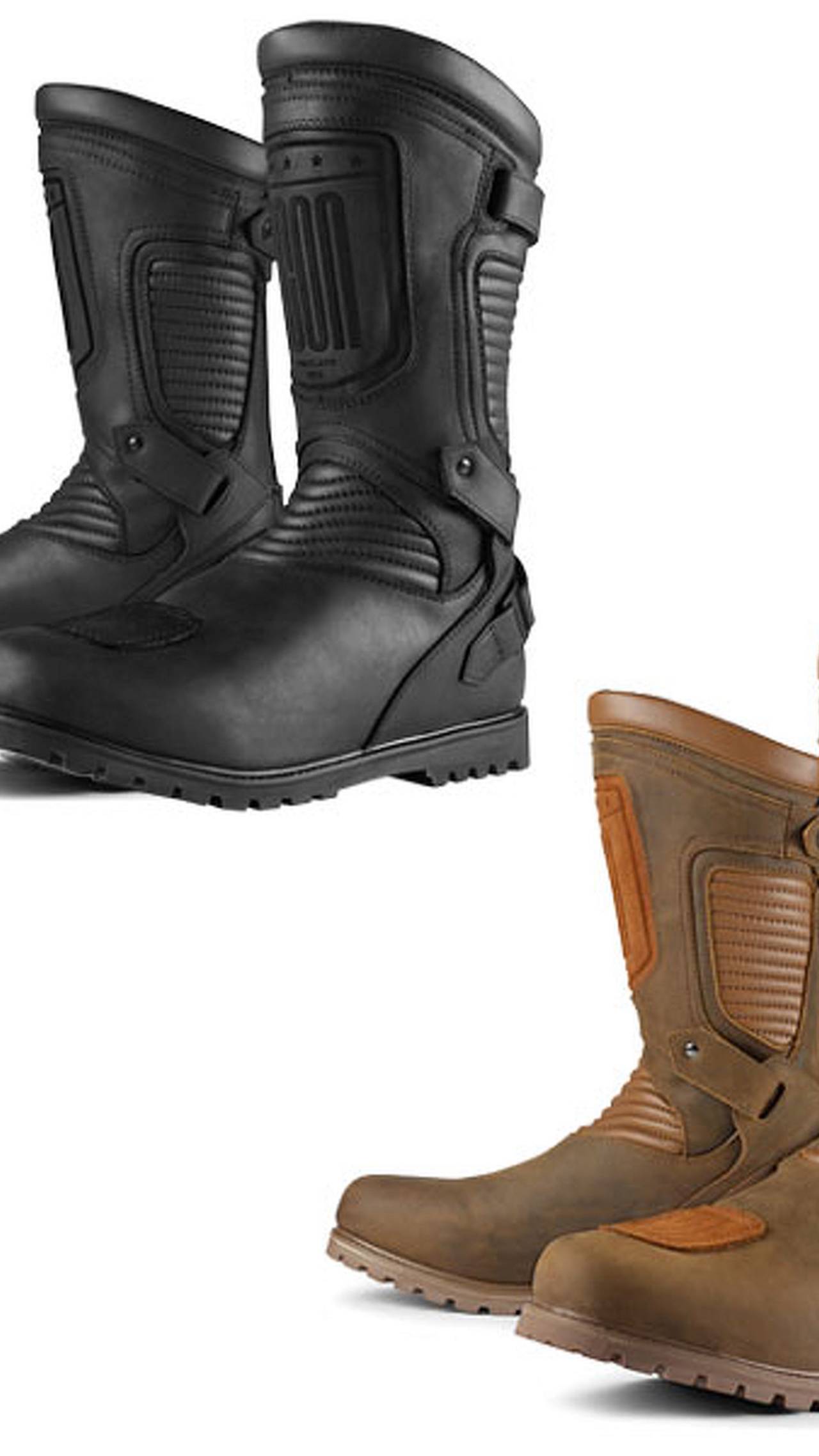 Here is the Icon Prep boot offered in either black of brown leather.

Not to be outdone, Alpinestars released 44 new items for this fall. Ranging from new gloves to leather race suits, as well as waterproof sport and 3/4 length jackets, it is a comprehensive and full-featured line up. Matching riding pants and a very comprehensive line up of women's riding apparel give consumers a lot of choices. 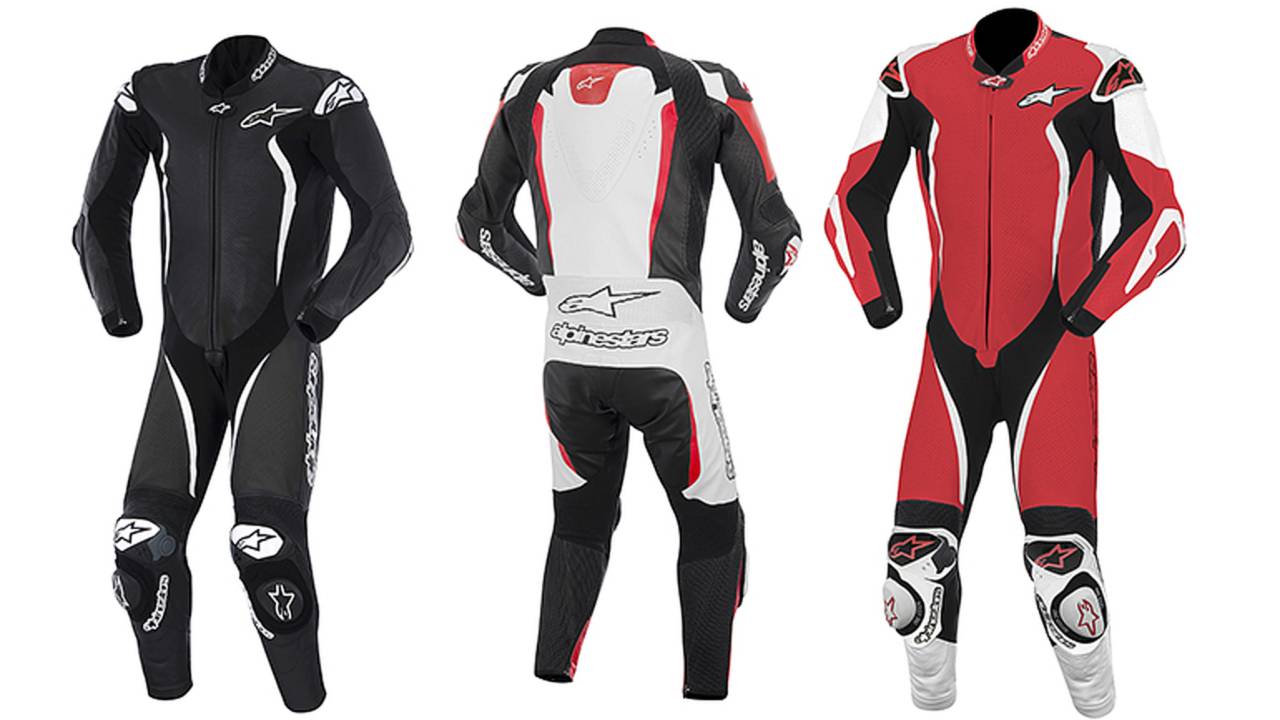 Offered in three different color options, the GP Tech has a suggested retail of $2,199.95.

Most Moto GP racers ride with the Alpinestars racing jacket, and you and I have always had the chance to rock the race replica suit if we have the dough. The airbag deployment system on the race replica has had over 250 deployments with zero misfires. According to Alpinestars, the airbag system’s algorithm is complicated and has had zero problems.

The Race Replica suit has been replaced with the GP Tech, a far superior and far more comfortable suit. It features killer accordion fabric around the shoulders, arms and knees, and a new, softer material around the collar and wrists—areas that were once before just hard leather. This suit is supposed to fit better and be more comfortable. There’s a long list of new advances with this suit, and we can expect the similar pricing: $2,199.95. 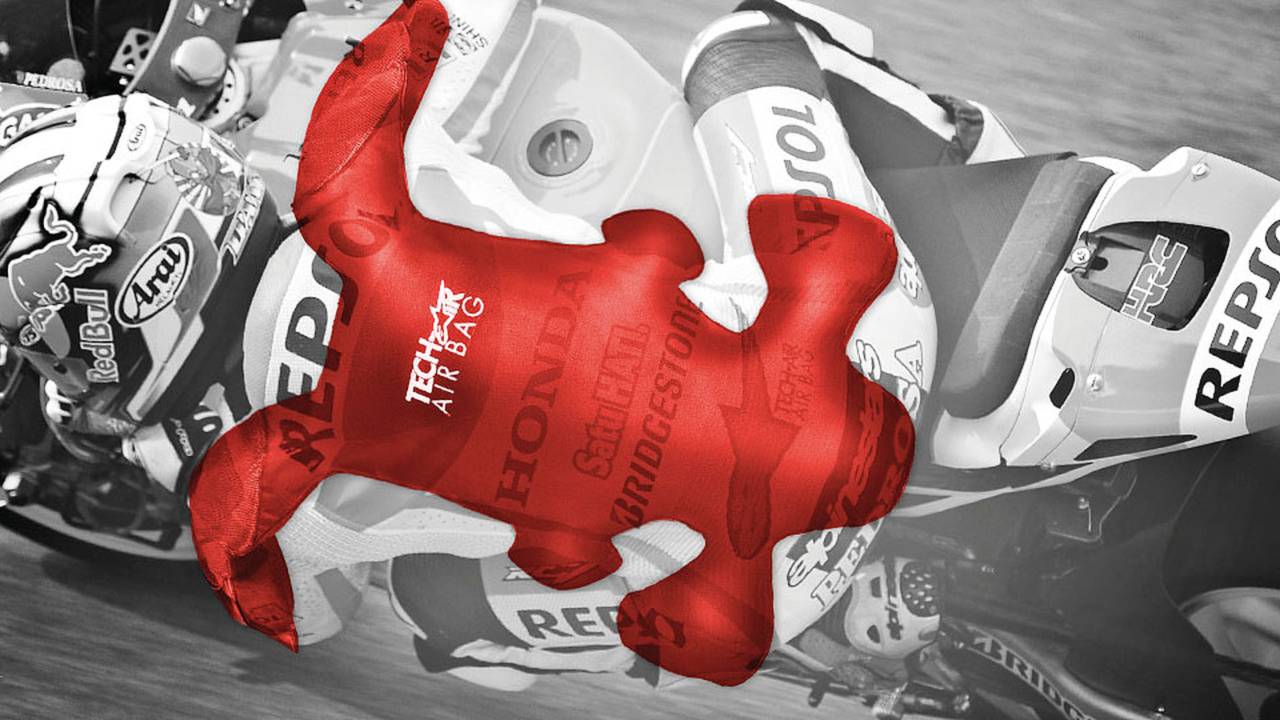 Officially it's an unofficial announcement, but Alpinestar’s new GP Tech suit will not include the airbag system. However, the suit does have provisions for it. The guys are weeks away from announcing a street system, with an even more complicated algorithm, that reacts to accidents differently than being on the race track. This is big news in the department of safety. Again, it’s too expensive for the average guy to buy, but making it readily available and street-oriented is one big step closer to making it a standard one day. 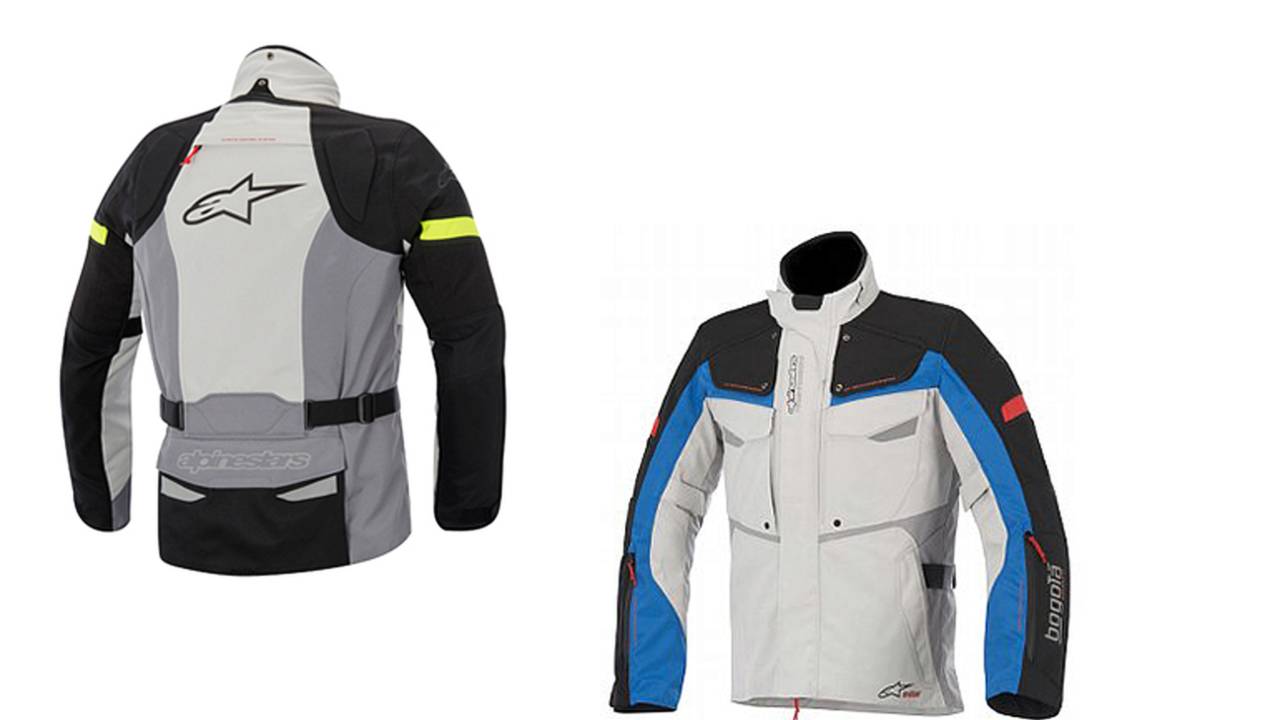 The Alpinestars Bogota is a serious suit for long miles. The jacket comes in varying colors and retails around $350.

While there is a lot to choose from, some of our initial favorites are the Bogota DS featuring Drystar waterproofing. Not for the faint of heart, the Bogota features double-covered, waterproof zipper, removable liners and some really trick zipper vents with waterproof covers. We got an upclose look at the jacket, but aren’t able to review it just yet as it’s not in stock. It’s designed for the serious riders who like to put down a lot of miles, cover up for single-digit temps and then uncover and unzip for triple digits. 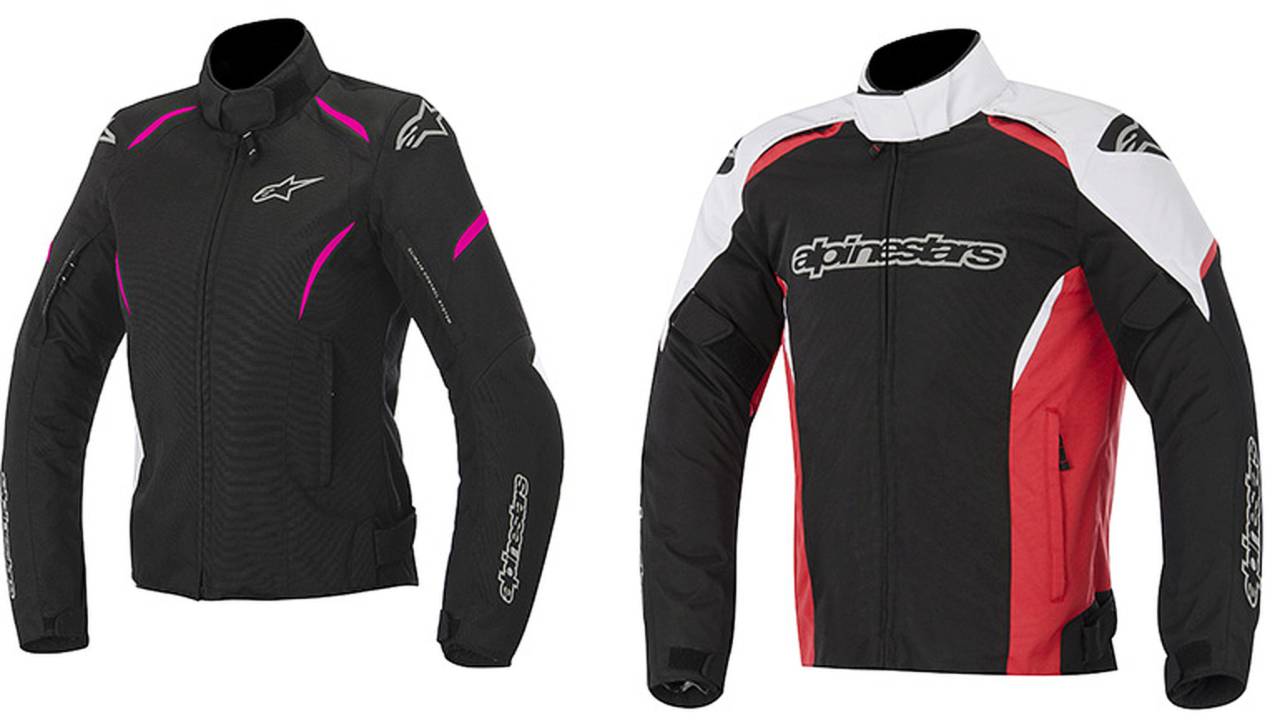 The Stella lineup of apparel for women includes this sport-oriented Gunner Waterproof jacket (which is available for men, too). It's a very nice jacket for sportbike riders with a forward leaning cut. Their MonoFuse boot has an innovative buckle design that doesn't inhibit ankle movement and still offers a secure fit.

The Dainese 2014 Autumn collection is divided into the racing, city and touring segments. First up is the update on Dainese's race suit. 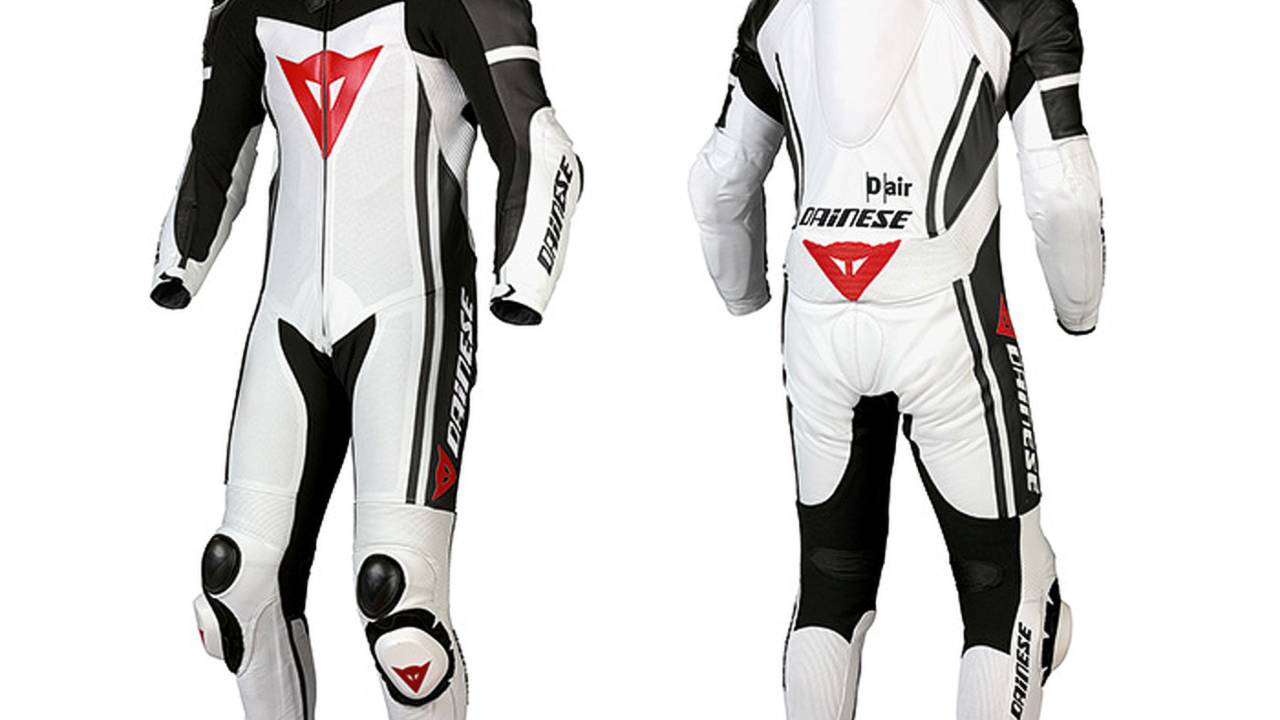 The Racing P suit is a CE certified leather suit that utilizes S1 bi-stretch fabric to stay tight on your body, no matter your movement. It also has elasticated inserts and Pro-Shape protectors. Their D-Air system is set to revolutionize the safety apparel market. 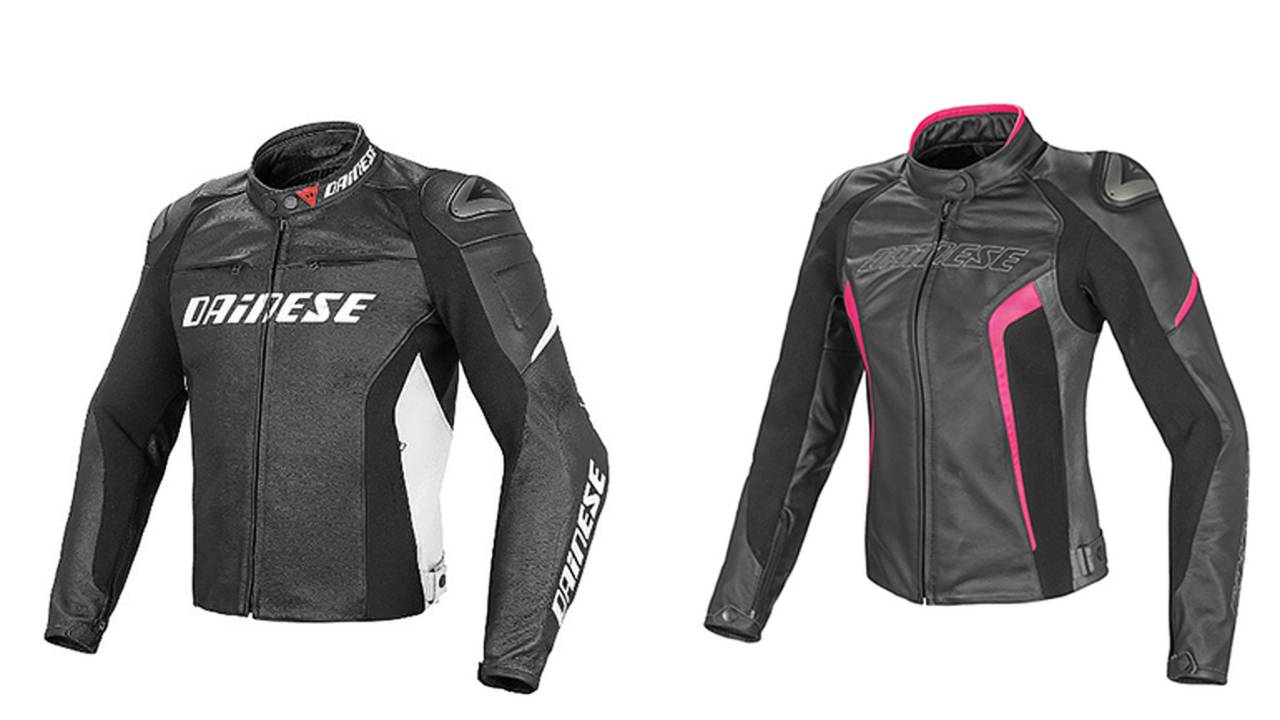 If the complete suit is too much for you, there’s the Racing D1 Pelle jacket offered for him and her. It features a Tutu cowhide leather with the same S1 bi-stretch inserts as the suit. It has air vents in the chest and aluminum inserts as well as protectors.

The Motorshow D-WP is a hip little shoe. Designed to look the part of a stylish causal shoe, it has CE certification, reinforced heels, rigid inserts, grip-control inserts and a waterproof and breathable membrane. 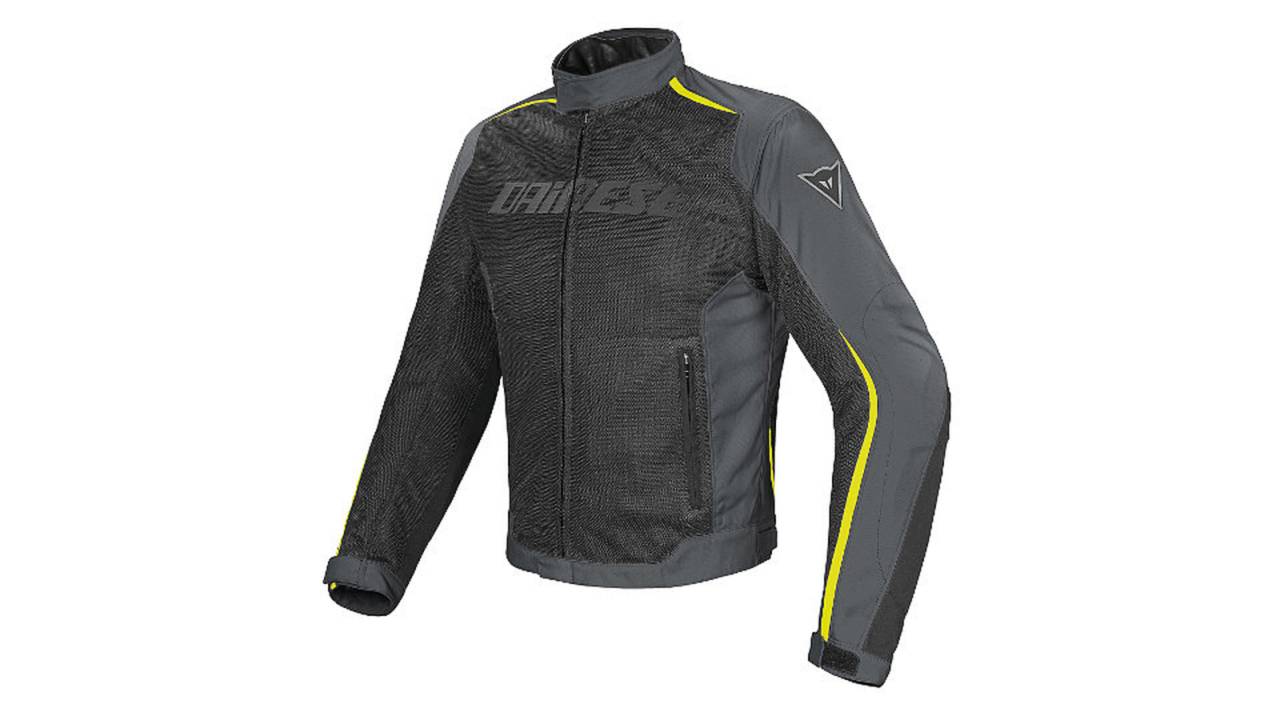 The Hydra Flux D-Dry is a less aggressive and breathable jacket with Boomerang and Quick-Dry fabrics. It has a removable internal membrane and protectors throughout.

The Speed and Strength Cruise Missile Jacket retails under $200.

Speed and Strength is a newer, lesser known brand on the market. Designed in a similar vein to ICON with super stylish gear, they are covering a lot of ground with their latest line up, appealing to multiple genres in the market at a fair price. With gear names like Cruise Missile, Killer Queen and Urge Overkill, their lineup is in your face. 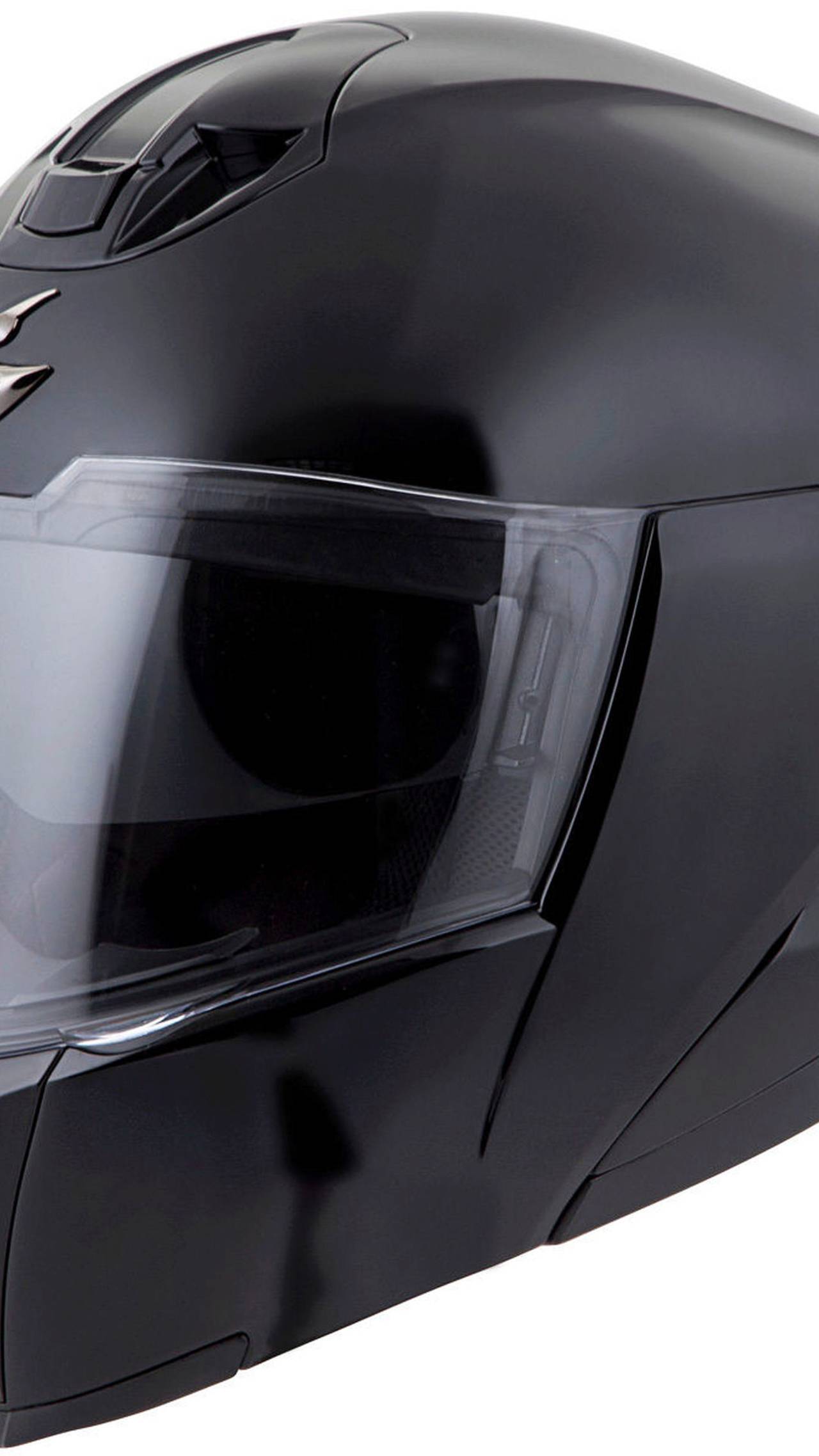 Scorpion released a new EXO 900X Transformer. This update to their modular helmet has some very nice features. They made it lighter, streamlined the aerodynamics and also reduced the price. That's the kind of update we love to see.