2015 Yamaha YZF-R3 First Ride - The Beginner Bike and Beyond 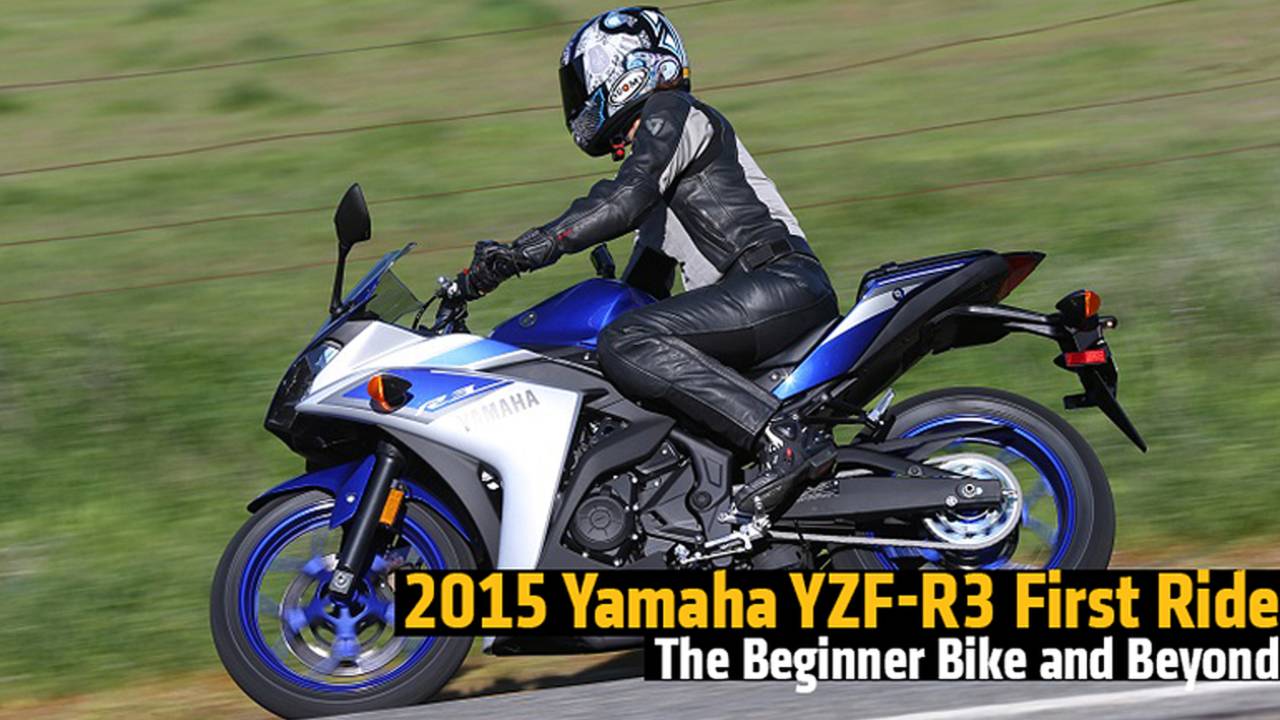 RideApart rides the all-new Yamaha YZF-R3. Discover what the R3 has to offer as an beginner bike.

When posting status updates on Facebook in regards to the new Yamaha YZF-R3, one friend asked a great question: “I still wanna know why they made it a 320 when it's supposed to be a lightweight class bike.”

Everyone is familiar is with Yamaha’s R6 and R1, so naturally one would think that the R3 is joining this umbrella of sportbikes. Surprisingly though, this is not the case. The Yamaha R3 falls into the casual street rider sector with bikes such as the FZ-07.

Once I explained this to him, he said “they could have fooled me.” And I agree! Just by looking at the R3, it certainly has a sportbike style, but every decision made while building it was to appeal to the beginner rider. Until now, Yamaha hasn’t had a bike designed for the entry-rider. They have, however, been keeping an eye on that segment for the past five years and saw a nice increase in sales. So naturally, they seized the opportunity and jumped into that market just in time.

If you started off on a Ninja 250, we’re going to assume it didn’t take you too long until you hopped on a bigger bike. Yamaha’s ultimate goal with the R3 is for it to be easy for a newbie to start with, but also keep his or her interest in it for longer, or as they put it “grow with you as a rider.” The R3 is a stepping stone, or introduction, to Yamaha’s R-series.

Yamaha put together a great series of rides for this media launch. We began with doing a street ride in Glenn County, CA, which is located north of the Bay Area right off I-5. This town of 27,940 was obviously bare, with not many cars on the street. The roads were, overall, nicely paved with a few rough patches here and there. There was also a good amount of long sweepers, so we were able to really feel how the R3 pulls. There was a nice size group (about eight of us) with a leader and a sweeper to make sure no one was left behind. We did a total of 120 miles on a beautiful and slightly windy California day.

I must note, the locals are also friendly. We ran into a middle-aged cowboy with a gnarly mustache along with his pup named Jack. He warned us to watch out for “Dead Man’s curve.” We nodded and smiled at him, but he was adamant that he was serious. In a thick country accent he said, “I’m taird of pickin’ up guys from there so watch out!” Well, needless to say we conquered it (in all honesty, we had no idea where it was either), and are all thankfully here to write about our experience. Yamaha R3= 1, Dead Man’s Curve= 0.

The second half of the day was at Thunderhill West track. For those not familiar with the track, it’s also located in Glenn County in a town called Willows. The track is owned and operated by the San Francisco region of the SCCA and at first only had its East track—a 2.86 mile 15 turn course. This changed in 2014 with the addition of the West track, a 1.9 mile road course with 10 turns. With both courses combined it totals 4.8 miles—making Thunderhill one of the longest tracks in the US.

Like the old track, West mainly has left turns and is overall more technical than the East course since there are more hairpins. One particular turn that comes to mind is an 11-degree banked sweeper that’s gnarly and I couldn’t take it at a decent speed no matter how hard I tried (we shall meet again soon West!) Check out the map of the track below.

West is on the bottom portion of this map. We ran the configuration starting with 1W and on.

As you can see, this is definitely a track that is very welcoming to smaller displacement motorcycles.

The R3 has a newly designed liquid-cooled twin 321 cc engine with a 6 gear transmission, in-line 2 -cylinder DOHC (with 4 valves per cylinder), and closed loop fuel-injection that produces a nice amount of power and performance with a wide powerband.  It also has a progressive throttle pulley. This helps to manage power at small throttle openings, which translates to easy riding for riders of all experience levels. What’s also neat about the R3 motor is the forged aluminum pistons, which is the same technology used for the R1 and R6.

Most Yamaha owners and fans are familiar with the crossplane crank—found on many of their bikes including the R1—which improves combustion and torque, resulting in a better throttle feeling. The R3, however, is equipped with a 180 degree crank that provides a compact engine design and a relatively smooth feeling when accelerating through the rpm range.

With a compression ratio of 11.2:1, the engine develops maximum power at 10,750 RPM (it has an engine rev limit at 12,245 RPM). Remember that 11 degree banker turn I mentioned earlier that I LOVE (I’m being sarcastic here)? Well, I took that turn a gear too high (3rd). So usually, on say a 250, you’d be able to watch wet paint dry before you can get the bike back up to speed—not the case with the R3. You can maybe think about whether you left the oven on before it’s right back up to speed. You’re also able to quickly grab another gear and get on the brakes heading into the next corner.

A downdraft induction fuel injection allows the bike to start right up and provides smooth performance in any and all conditions. The R3 pulled nicely along those long sweepers on the road—I hardly ever had to knock it into 6th while taking those at 60-70 mph. It felt stable. The engine also has a compact design and is light weight—it has a narrow valve angle (IN: 12 degree EX: 12.75 degrees). This doesn’t really mean much right now. All you need to know is that the motor was built this way in order to fit in its slim chassis…

Like the engine, the chassis is slim and designed with a steel diamond frame. What’s interesting is that the R3 has the same swing-arm and wheelbase length ratio as the R1. Yamaha says it was created this way for less variability in swing-arm angle during riding conditions.

Suspension wise, the R3 comes fitted KYB 41mm fork tubes with a 130mm stroke, and a KYB single shock rear with seven step pre-load adjust 45mm stroke with 125mm wheel travel. While riding through rough patches of road, the suspension felt stable, and handled the bumps beautiful without upsetting the positioning of the bike whatsoever. It also made me feel more confident on the bike—it’s almost as if you were riding a bigger bike with higher end suspension.

Helping to support the R3’s chassis and suspension and contributing to its light weight are the Michelin Pilot Street tires, with a size of 110/70 for the front and 140/70 for the rear. The wheels have Akebono brakes—298 mm floating mount front disc brakes and 220mm in the back—that Yamaha says provides great stopping power. I can agree with that statement since I was able to put the brakes to the test not only on the track, but also on the road. I almost missed a turn and really got on them while going over 60 mph. It stopped pretty well!

First adjective as well as a word you’ve been seeing frequently in this review so far is light. When I first swung a leg over, I couldn’t get over how light it was stock. The R3 comes in at a whopping 368 lbs (fueled, wet weight). Again, Yamaha wanted to get this bike light so it was easy for new riders to maneuver.

Second adjective (another word also used a lot) is that the ride is smooth. If you’re in a high gear and roll off the throttle to a slower speed, it smoothly gets you back up to speed without complaining. The R3 really was designed to absorb the hesitant abrupt inputs a new rider may provide, such as suddenly getting on or off the throttle. Dumping the clutch on this bike only provides a minor shudder and then it immediately smooths itself out.

The 30.7” seat height has a flat profile that helps maintain an upright position, making it easy to reach the clip-ons. You can scoot forward for a more comfortable ride, or sit back with your chest a bit forward so you can look more like you’re riding a sportbike. The R3 is, overall, a comfortable whether riding on the road or the track. The only minor complaint about positioning is that I felt it kind of hard to tuck in on the straight because I hit the rear tail immediately when I scooted back.

There’s nothing technologically ground breaking for the R3, but the things it does come with is nice to have, especially on a small displacement motorcycle.  It has an awesome analog tachometer and adjustable shift light (first time I’ve personally seen one on a little bike). It also comes equipped with a multi-function meter that lets you know what gear you’re in, a fuel gauge, real time and average fuel economy, water temperature, clock, two trip meters and an oil change indicator light. This bike has a better dash than on my 2011 Suzuki GSX-R750, so it’s definitely up with the times.

The R3 comes with a tank cover in case of the rider lays the bike down (which I’ve done plenty of when I first began riding), and the colors available are Raven (black with red highlights/trim), Team Yamaha Blue with Matte Silver, and Rapid Red. On average, it gets 56 mpg and has a 3.7-gallon tank. The street ride was a total of 125 miles and when I done, I still had two bars displayed on dash, so pretty great fuel economy.

The price is, in my opinion, is fantastic. MSRP is $4,990, which is very reasonable for a brand new motorcycle. Again, the goal for Yamaha is that once you pick up the R3, you’ll ride it for a while. If that’s the case, it would justify spending that amount of money on a new bike even more.

The YZF-R3 will be available at dealerships mid to late April.

Overall, I think this is an awesome bike for beginners. As a newbie rider, I think looks go a long way and the R3 delivers on that. Yamaha did a great job to make the bike look sporty using the “R-DNA” design that they define as mass forward silhouette, up-cutting tail section, two-eyed headlight, and R6 inspired aerodynamic design.

The price isn’t bad either, and it’s much better than buying a used Kawasaki Ninja 250. I say this because for the longest time, Kawi’s 250 dominated the beginner bike market, but they now have some serious competition. Start saving some money and get this instead of something used—I promise you won’t want to trade it in after six months of riding.

What I’m ultimately saying is that I feel that Yamaha did its job: The R3 is a great beginner bike that will keep you entertained for a while, and potentially, for the rest of your riding days.

Photos provided by Brian J. Nelson and video by Ray Gauger and on bike footage using my GoPro.