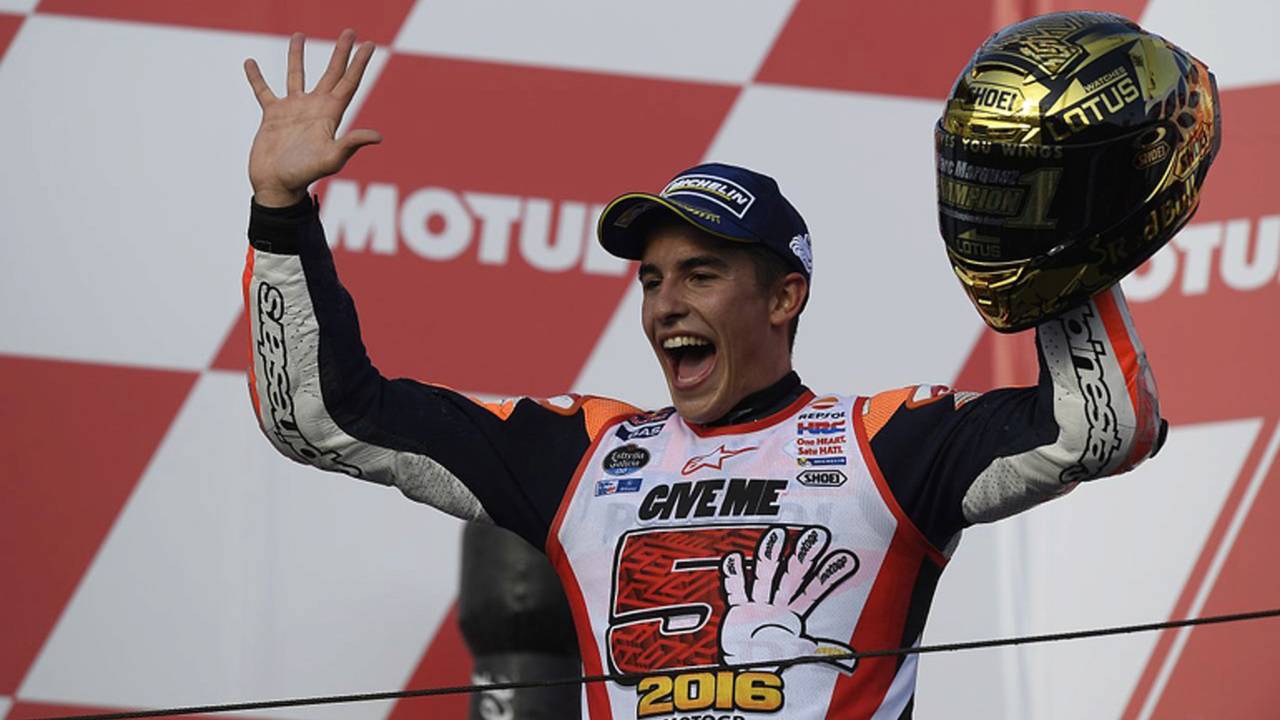 For the third time in four years, Marc Marquez is our MotoGP Champion.

Repsol Honda’s Marc Marquez earned his third MotoGP championship this past weekend with a victory at the Twin Ring Motegi Circuit in Japan, with three races remaining on the schedule. This is the 23-year old Spaniard’s third title in four years, making him the youngest competitor to ever accumulate so many Grand Prix championships (2013, 2014 & 2016) in so little time. Combined with his 125GP (2010) and Moto2 (2012) championships, his total is now five Grand Prix titles in under a decade. Check out the complete recap of the 2016 Motegi MotoGP Race on Motorsport.com if you are looking for the play-by-play recap.

Marquez celebrates his championship winning race with a victory lap of the Twin Ring Motegi Circuit.

“It’s incredible! Before the race I didn’t expect to be Champion, and I said that here it would be impossible," said Marc Marquez after winning his fifth race of the season and wrapping up the 2016 title. "However, when I saw that Rossi was out of the race, I decided to push hard for the victory. I was riding my hardest, and when there were three laps to go, I read on my pit board that Lorenzo was also out; on that same lap, I made mistakes in four or five corners, as it was difficult to stay focused! I’m very happy because this title is very special considering some of the crashes I had last year, and also because it came at Motegi, Honda’s home. Honda has worked so hard this year, and you could see the fruits of that effort also at this track, where we’ve struggled in the past. I myself also improved during the season; for instance, I learned how to better use the front Michelin tyre. It has been a demanding year, but a fantastic one. It’s great for my team, and of course I don’t want to forget my grandmother, who passed away this year and would be very happy with this World Championship. Now we can just enjoy it and go into the last three races with maybe a more ‘Marc Marquez’ style.”

Marquez continues to rewrite the history books and Honda is keen to point them out. After winning his third premier class title at the young age of 23 years, 242 days, he has deposed Mike Hailwood who was 24 years, 108 days when he won his third 500cc title in 1964. He also joins Hailwood and Giacomo Agostini as the only riders to win at least five Grand Prix races in a seven year span.

But the record he is most likely to be proud of is that he has become the youngest rider in history to win five world championship titles, a claim formerly held by his rival Valentino Rossi who was 24 years, 238 days old at the time he pulled it off in 2003.

Check out the championship winning Interview with Marquez for a little insight as to what makes this amazing rider so damn good.