How Husqvarna Designed More Than Just A Motorcycle 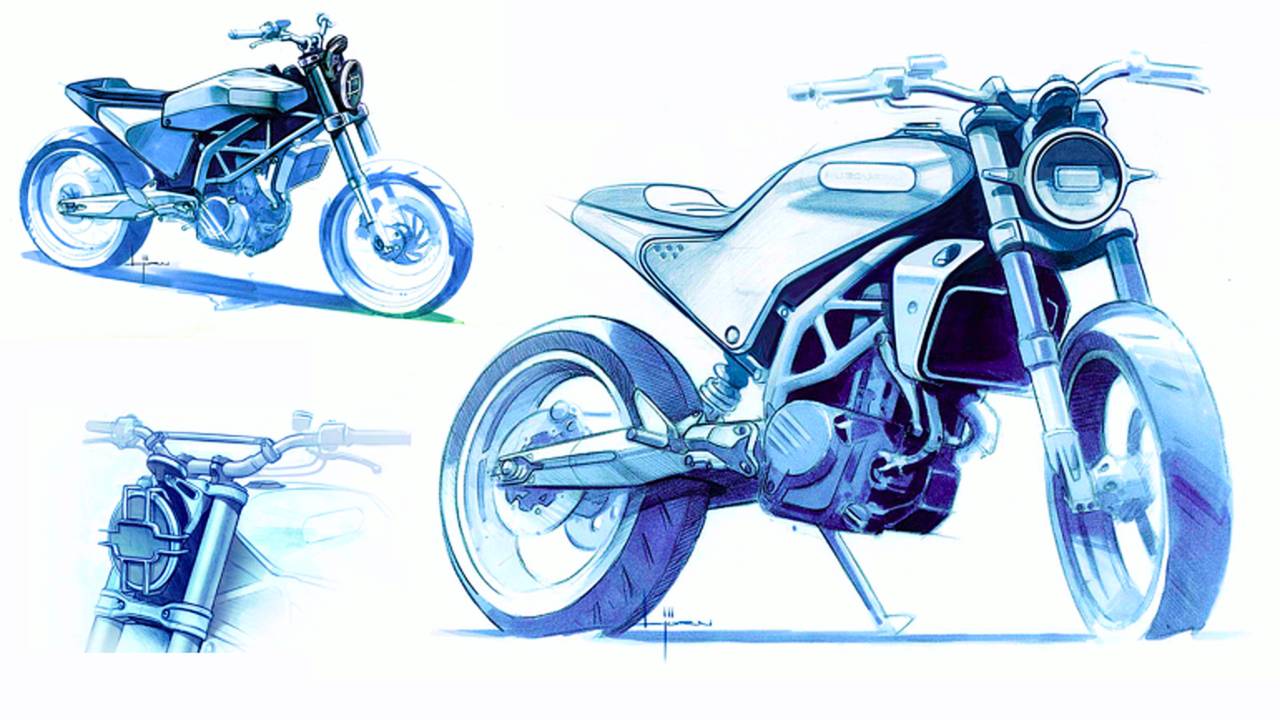 Husqvarna’s new Svartpilen and Vitpilen models are coming this year. We look at the ways in which their unique design language makes them stand out.

How Husqvarna Designed More Than Just A Motorcycle Model

The Swedish marque returns to the street market with a bang, and a new brand.

“Design is not simply art, it is elegance of function”.

Dozens of stunning prototype bikes are unveiled every year, but few have made bigger waves than Husqvarna’s Svartpilen and Vitpilen concepts. Touted by our colleagues at Cycle World as the most anticipated bike of 2017, the Swedish prototypes boast a stunning neo-cafe aesthetic that has made them into two of the most stylized and desirable modern motorcycles to see production. But when Austrian design whiz Maxime Thouvenin was handed the keys to the Vitpilen project, the assignment demanded far more than simply designing the average motorcycle.

Before delving into Thouvenin’s designs, we should probably take a quick look at Husqvarna to understand what motivated the KTM-owned, Swedish marque to develop these stunning bikes. Husqvarna has actually been in existence in one form or another since the 17th century. The company has produced everything from firearms and typewriters to sewing machines, and of course, power-tools (When I worked as a ranch hand in my younger years I used almost exclusively Husky equipment). Around the dawn of the 1900s Husqvarna began producing motorcycles.

In the decades that followed, the Swedish manufacturer carved out a reputation for producing quality, lightweight off-road machines. For a time the company even dominated various high-profile off-road competitions. Even the late Steve McQueen was well known for piloting Husky’s bikes. Husqvarna traded hands numerous times until it was bought out by Cagiva in 1987. After that it was BMW in 2007, and more recently KTM, who purchased the Swedish outfit back in 2013. Because the ‘Ready To Race” brand already had a hand in the off-road and MX segment, the KTM opted to rebrand Husqvarna as a street bike producer.

KTM delegated the monumental task of designing a whole new Husqvarna product line to Thouvenin, a talented designer at the world renowned Kiska Design Studio, a firm that has been designing KTM’s bikes since 1992. Despite Kiska doing some exceptional work, the task of rebranding an existing company to attract new customers is pretty daunting. While Husky did offer the road-legal 650 Terra and Strada models—as well as the TE 310R, 449, and 511—it wanted a model that would push the manufacturer into the category of legitimate street-bike-purveyor, not an off-road-purveyor that offers a road-bike or two.

Thouvenin, who comes from a line of motorcycle fanatics, studied industrial design at France’s Institut Supérieur de Design. His bona fides include interning at Kiska, a stint at BMW, and a full-time position back at Kiska. His work over the years garnered a lot of deserved attention, leading him to rise through the ranks of the prestigious design firm. So when it came time to task someone with designing a new Husky street platform, Thouvenin was an obvious choice.

Despite Thouvenin being a seasoned designer, this project was significantly more complex than just designing your average motorcycle. That's because this wasn’t just a motorcycle, this was a machine that carried the responsibility of defining the company's design language and setting it up for future products. Making the endeavor that much more difficult was the fact that Thouvenin was required to work within some extremely restrictive guidelines.

The bike had to be new rider-approachable but still fun to pilot. It had to use existing, off-the-shelf parts from KTM and its subsidiary’s operations. It had to have an air of distinct uniqueness and originality, but its materials and production costs couldn’t significantly exceed the established price-range for high-end entry-level bikes. Oh, and it had to do this while still turning a profit. Then, the design team was told they had an incredibly tight deadline to do all this work and get the design ready to go. No sweat, right?

The first thing Thouvenin and his team did was thoroughly research the contemporary motorcycle market. They took note of what was popular and compiled a list of influential styles or features of existing machines.

“The idea was to capture the essence of what motorcycles were in the past and what people were missing with modern bikes,” explained Thouvenin. “And to do that, but in the most modern, progressive way. Basically to really offer an alternative to what was out there.”

With motorcycle sales as a whole in a pronounced slump, the reintroduction and near reinvention of an old brand was a bold move on KTM's part. To make the new Huskys stand out, the design language needed to be just as bold. It also had to appeal to new riders and seasoned vets alike.

“Being approachable is not something new, they (Husqvarna) always did something approachable for people. It’s a very Swedish or Scandinavian design approach; it’s all functional, very minimalist, very reduced in everything they did. And this perfectly makes sense with what we’re trying to achieve now, because that is also very much Scandinavian,” remarked Thouvenin.

That same reason is a large part of why the company landed on the 401 engine (technically 373.2cc) for the Svartpilen and Vitpilen. Husqvarna wanted the new models to be accessible and approachable to new riders. With the liquid-cooled single only making a claimed 43 horsepower and 25.8 foot-pounds of torque, the bikes are powerful enough to have fun on while remaining an ideal candidate for a learner. There's also the fact that a bike with such a displacement is legally accessible to riders with their A2 license.

Thouvenin experimented with dozens of different ‘Pilen concepts before landing on the final production designs.

So after only a year or so, Thouvenin and his team presented their first Svartpilen and Vitpilen 401 concepts at EICMA 2014. Both were met with an incredibly warm reception from the motorcycling public. Though Husqvarna didn’t reveal if it had any intentions of putting the prototypes into production, the enormous hype generated by Thouvenin’s neo-retro protos made it abundantly clear that there was very much indeed a market for them. Not long after the show, reps from Husqvarna spoke up and announced that the 401s would go into production around 2018.

The following year at EICMA 2015, Husqvarna pulled the cover off a new, larger Vitpilen-variant powered by the same 75hp, liquid-cooled, 693cc single found in Husky’s 701 Supermoto (and KTM’s 690 Duke). The public’s response to this bigger bike quickly convinced company higher-ups that more experienced riders were also interested in the futuristic, minimalistic two-wheeler. The next year Husqvarna rolled out the Vitpilen 401 Aero concept to generate additional hype and demonstrate the Vitpilen-platform’s range.

On top of the gorgeous Aero concept, Husqvarna also used EICMA 2016 to announce that the two new models would officially go into production and be in showrooms as early as Spring of 2018. The company later announced that it would also be offering a 125cc version of the cafe-racer and scrambler-style 401 models. This was yet another strategic movie on Husky’s behalf. By producing these tiny models, the company could better tap into several emerging markets and become an option for riders with licenses limiting them to machines no bigger than 125cc’s.

As you’ve probably guessed, the 125 version will be powered by an existing 125cc single, likely the same liquid-cooled, four-stroke, single used in KTM’s RC and Duke 125 models. This spread of engine displacements allows Husqvarna to tap into a wide demographic that includes everyone from first-time riders to season two-wheeling vets.

The minimalistic, bare bones nature of Thouvenin’s designs are an undeniable aspect of what makes them so impressive. The futuristic Swedish scoots are little more than a lightweight steel trellis frame—the exact same chassis found on KTM’s 390 Duke, in fact—capped-off with a compact, monocoque body. This one-piece body is offset by narrow slivers serving as radiator shrouds and a fender. With a such a stark design however, the elements that remain are that much more important. Every piece is not only vital to the machine’s function, but everything serves a purpose. As the late Steve Jobs once said, “Design is not just what it looks like and feels like. Design is how it works.”

A rendering of what would become the Svartpilen 401.

While the bikes were designed to be relatively simple in many regards, they are nonetheless equipped with a range of modern amenities. The 401 and 701 models feature ABS, ride-by-wire throttle, slipper-clutch, and dual counter balancers—one on the camshaft and one on the crankshaft—to lessen the thumper’s vibration when the throttle is opened. I’m not 100 percent on whether or not the dual counter balancers are only on the 701, or if they will also be on the smaller Husky street models.

The bikes' spartan visual theme dictates much of the design and offers a bike that’s modern without being garish or over the top.

“If you look at today’s market you’ve got all these super high-tech performance-oriented bikes—quite often aggressive—expressing more and more power. Quite often over-styled,” says Thouvenin.

A visual depiction of the pieces that go into creating Husky’s Vitpilen 701.

Another vital part of this plan’s success was riding on designing a concept bike that could realistically see production without the initial design being heavily watered-down. While this requirement greatly slowed the design process, it seems to have paid off considering the production versions of the 401’s look shockingly similar to the original concerts unveiled four years ago. The 701 did see some noticeable changes, though it’s still very much identifiable as the same machine and aside from the loss of the flush-sitting red air-filter and belly-pan slit. Despite the major similarities Thouvenin says countless changes were made to the concept bikes. “There’s not a square-centimeter that’s the same, actually. So we had t rework everything and find solutions with research and development and the engineers to make that happen,” relayed Thouvenin.

The Svartpilen and Vitpilen 401s—which have a claimed dry-weight of 330-pounds—will reportedly carry an MSRP of $6,299, while the Vitpilen 701 will be priced at $11,999, making it comparable to Husky’s current 701 Supermoto. So far there doesn’t appear to be any word on the 125cc models' pricing. Husqvarna says the three models will hit North American showrooms in April of 2018, with the global roll-out following the month after.

When asked about some of his favorite modern production motorcycles, and what it takes to make a “good” motorcycle, Thouveni replied saying, “For me the Ducati Panigale is an example of when the planets—engineering, package, design—have aligned. When the right package, engineering, technical solutions and design meet, and all with the right timing, then this creates a great motorcycle. If one of these aspects is missing, then what you have is just a good bike.”