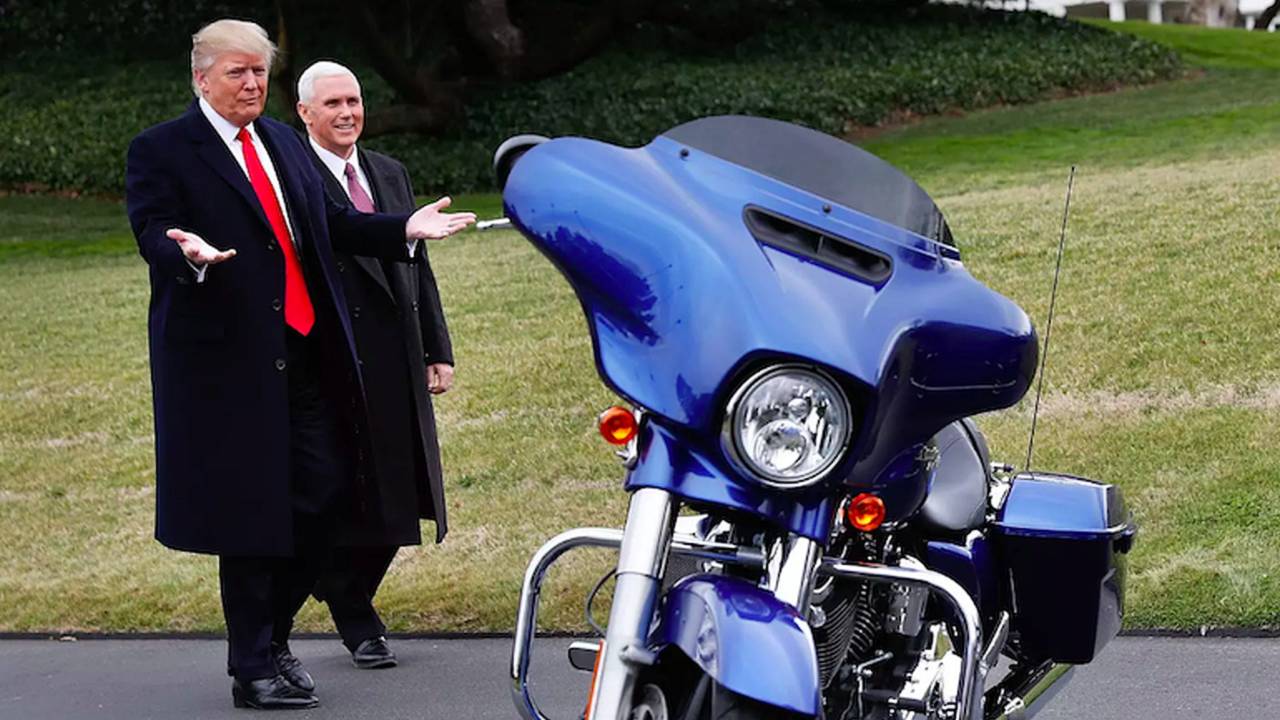 10% on aluminum and 25%, how Trump’s proposed tariffs will affect the motorcycle industry.

Following a White House meeting with leaders of the steel industry earlier in the week, President Donald Trump announced plans to potentially impose new tariffs of 10 percent for aluminum and 25 percent for steel on imported metals. Pointing to a reported trade deficit of $800 billion dollars, POTUS explained that he doesn’t have a choice and this is being done to “protect our country and our workers”. But the ramifications from these tariffs have the potential to greatly impact the US motorcycle manufacturing industry, and possibly even the global industry and market.

Upon hearing the news, other nations like China, Mexico, and Brazil spoke of responding with countermeasures, while Canada—the top supplier of both steel and aluminum to the US—and the European Union outright said they will bring forward retaliatory measures if Trump’s proposed tariffs are enacted. All throughout his campaign and his subsequent time in office, Trump has repeated how he feels the US is getting ripped off by its trading partners and that he aims to change that. The recent announcement of these tariffs are just a more tangible form of his previously stated agenda.

The 45th US President has been quite vocal about why he feels international trade is skewed against the US, recently citing Harley-Davidson as an example while speaking to governors last Monday. “When they send a motorcycle to India, as an example, they have to pay 100 percent tax—100 percent,” Trump told U.S. governors. “Now, the (Indian) prime minister—who I think is a fantastic man—called me the other day. He said, ‘We are lowering it to 50 percent.’ I said, ‘OK, but so far we’re getting nothing.’ So we get nothing, he gets 50 (percent), and they think we’re doing—like they’re doing us a favor. That’s not a favor.”

During that same meeting on Monday POTUS contrasted the different tariffs imposed on Harley-Davidsons in India to American tariffs on motorcycles manufactured in India. “India sells us a lot of motorbikes,” Trump said, all with zero tariffs. According to the Washington Post, Harley-Davidson annually sells around 4.5K units in India—the majority of which are assembled domestically and therefore not subject to the same tariffs typically slapped on bikes not assembled within the country. At the moment the only motorcycle manufacturer in India—excluding small boutique outfits—that’s exporting models into the US is Royal Enfield, which only sells around 1,000 bikes in the America each year.

As Trump has pointed out, there are undeniable trade deficits between the US and China—a major player in the global export market—and Trump seemingly believes the proposed tariffs will protect America’s domestic manufacturers from being financially undercut by foreign competitors. Steel is available for a bargain overseas, and if a project necessitates an ample amount of steel, it makes a lot of sense to opt to order from overseas. Even the President himself has regularly utilized a lot of Chinese steel for his own construction projects. It just makes logical and fiscal sense.

According to Statista, US aluminum consumption alone was just shy of six-million metric-tons last year. The United States also typically exports more than ten-million tons of steel products per year, though the country imports around four-times that amount. Add to that the fact that in 2017, the five leading importers of US steel (in order) were Canada, Brazil, South Korea, Mexico, and Russia. Canadian Prime Minister Justin Trudeau called the potential tariffs "absolutely unacceptable”, stating the move would result in massive disruption of the market in all of North America.

Trump defended his plan from critics via several Tweets, one early Friday morning read, “When a country Taxes our products coming in at, say 50% and we tax the same product coming into our country at ZERO, not fair or smart. We Will soon be starting RECIPROCAL TAXES so that we will charge the same thing as they charge us. $800 Billion Trade Deficit-have no choice!”.

Jean-Claude Juncker, European Commission President specifically named Harley-Davidson as one of the iconic American brands that would be hit by the aftermath of Trump’s tariffs. After Trump made his initial announcement on March 1, Juncker called Trump’s proposed policies: “blatant intervention to protect US domestic industry,” and responded to the news stating, “We will not sit idly while our industry is hit with unfair measures that put thousands of European jobs at risk,” and that the EU will “react firmly and commensurately” in defense of its interests.

As of Saturday morning Harley’s spokesperson, Michael Pflughoeft declined to speak on the matter, not saying anything further than “We will wait for more details on the proposed tariffs before we comment”.

The President stood by his earlier statements, taking to Twitter, again, writing, “We must protect our country and our workers. Our steel industry is in bad shape. IF YOU DON’T HAVE STEEL, YOU DON’T HAVE A COUNTRY!”. The US Steel industry has been in major decline for the last couple decades, with well over 50,000 jobs disappearing between 2000 and 2016, and the number of tons domestically produced dropping from 112 to 86.5 in that same time.

But one doesn’t have to be an economist to understand that the increased costs will be passed on to the consumer. This becomes a problem for companies like Harley as its bikes are already more expensive overseas (at least in the major markets I looked into such as the UK, though obviously the strength of the US Dollar plays a large role in this too) and around one-third of Harley’s bikes are sold overseas and more than half of H-D’s international sales are from the EU. The same EU threatening a retaliatory three-step-plan to penalize US trade $3.5B—the amount the EU is calculating its own steel and aluminum industries will lose over the tariffs.

These retaliatory tariffs suggested by foreign nations in response to the President’s recently announced plan would further complicate matters for the already struggling US motorcycle manufacturing industry. American marques will have an increasingly difficult time trying to sell overseas, especially if the competitions’ price tags haven’t been inflated by steep important tariffs. But even in the domestic market prices will probably rise on account of increased steel and aluminum prices, assuming American OEM’s won’t be able to get all the metal their respective operations require domestically. Not to mention many parts even on bikes assembled in the US originally come from overseas.

Though Harley-Davidson was the example given by Trump when speaking to congress (as well as being mentioned by the European Commission President) other American outfits like Polaris would be dealt a serious blow if the proposed tariffs become a reality. While Polaris’s subsidiary Indian Motorcycle has in recent years managed to annually sell a few thousand units overseas, a larger percentage of Polaris’s income is generated via selling snowmobiles to countries like Canada, who unsurprisingly are a major purchaser of snowmobiles.

This one's pretty self explanatory.

Smaller businesses like Cleveland Cycle Werks—a company that relies on cheap imports and pricing in order to deliver affordable machines—could see its export market crippled by the tariffs depending on the reaction of officials overseas.

While motorcycle manufacturers have been tightlipped about the recent news, Robert L. Shanks, Ford Motor’s Chief Financial Officer said the effect of taxing the metals which are extensively used in the auto (and moto) manufacturing industries would be devastating. With both Victory and EBR going under within a single month last year, the fear Trump’s tariffs could have unforeseen negative consequences is very real.

Monday’s proposed tariffs also come with the potential to further harm domestic motorcycle sales which are already not doing well. While American V-Twins remain king in the US, the majority of other genres of motorcycles found in America come from foreign companies. Exact details on Trump’s plan have not yet been revealed—plus the plan has yet to be enacted and is not yet set in stone—though OEMs from around the world are likely nervous these tariffs may largely impact the motorcycle business. For companies like Ducati, where its largest buyer is the US market, the import fees are less-than-welcome news.

Trump is however confident that this “trade war” is one that America will win. Easily in fact. Despite several of the President's closest advisors advocating against these measures, on Friday morning one top trade advisor, Peter Navarro, sat down for an interview with Fox’s Business Network in which he stated why he didn’t think other nations would actually follow through on retaliating, explaining, “for the simple reason that we are the most lucrative and biggest market in the world”.

Not everyone agrees with the Trump administration and its cabinet though. Li Xingchuang, vice chairman of the China Iron and Steel Association called the proposed tariffs ‘stupid”, and went on to state “Trump’s decision does no good to anyone except a few American steel enterprises.” John M. Weeks, Canada’s negotiator for the North American Free Trade Agreement (better known as NAFTA) back in the early ‘90s relayed that Trump’s “notion is going down very badly in Canada” and that “It will certainly have a negative effect on our bilateral relationship”.

As President, Trump is completely entitled to do this if he so choses to thanks to a seldom-used legal provision giving him liberty to restrict imports in an effort to bolster the American industrial base in the interest of national security. On top of other nations potentially following suit and enacting countermeasure tariffs on the US, there’s also the very real possibility that the World Trade Organization—which exists to help resolve these exact type of dilemmas—will almost certainly thoroughly scrutinize the President’s plan.

Though the repeatedly aforementioned proposed tariffs pose a very real threat to the motorcycle manufacturing industry in the US, a myriad of other American business sectors such as the agricultural and clothing industries could suffer severe consequences after the dust settles following all the new tariffs. In the days that follow companies like Harley-Davidson and Polaris—as well as other companies like Ducati—are likely to speak up on the current situation. There’s a lot riding on whether or not President Donald J. Trump will signs the papers for the proposed tariffs this week.