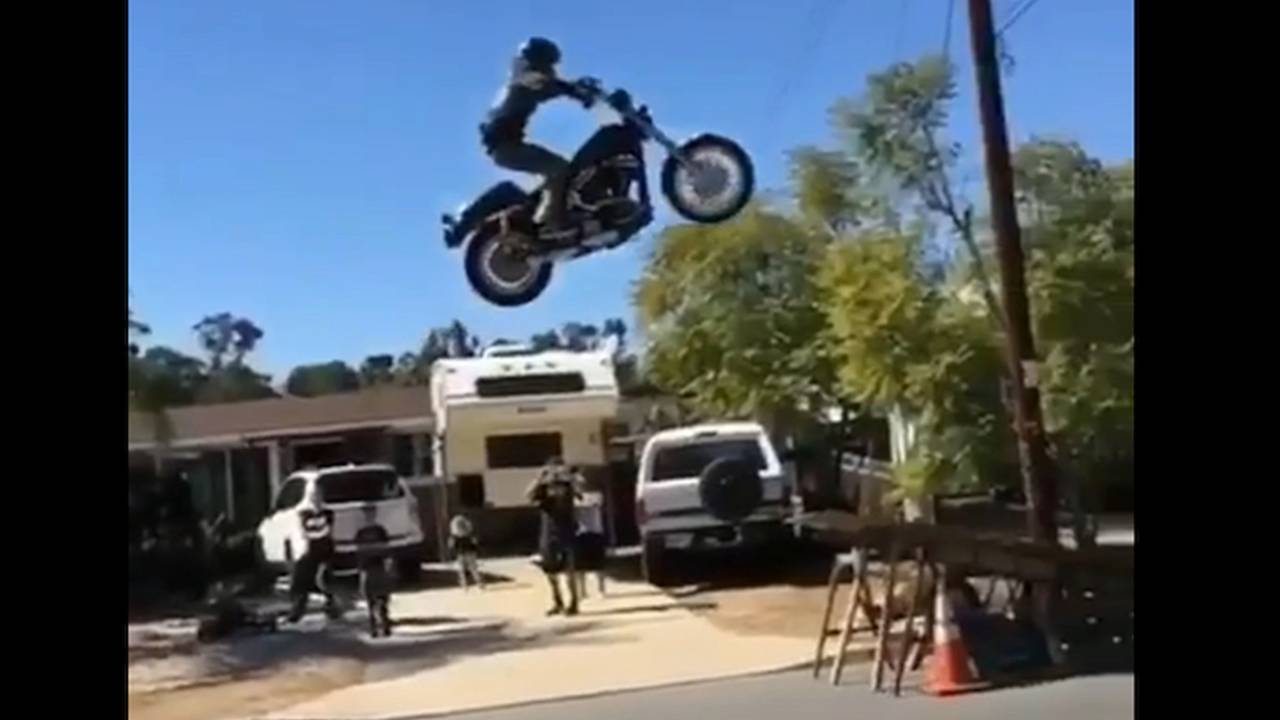 When jumping a big 'ol Harley, it’s the landing you really gotta worry about.

An ’87 FXR, a jury-rigged ramp setup, and way too much speed can be a recipe for disaster

As Evel Knievel demonstrated on a myriad of occasions, jumping a Harley-Davidson can go bad rather quickly. The heavy American V-Twins don’t exactly lend themselves to being airborne and Harley’s suspension isn’t really designed for absorbing the kind of impact jumps entail—even when its a slightly more nimble FXR. One 'brave' rider named Tyler Flight recently took his “bone stock 1987 FXR” off a ramp that had been haphazardly setup, and well, it didn’t go so great.

In a short, albeit wildly entertaining video posted to Flight’s Instagram account, the brazen Harley rider and a few friends MacGyver together launch and landing ramps out of two-by-fours, cinder blocks, wood-pallets, plywood, and presumably whatever else they had laying around. In one edit of the video, one of Flight’s buddies can be seen sliding an icebox/cooler under the launch ramp, something that speaks volumes about how carefully and calculated this little stunt was, or wasn't rather.

As you can see, the ramp was carefully built using only the finest materials and construction techniques

Before giving the objectively questionable stunt a go, Flight describes the endeavor as; “kind of a little practice jump”, and says, “I’m a little sketched, I’l be alright I think,” when the person holding the camera asks him how he’s feeling abut jump. While he is wearing a helmet, gloves, and a jacket, Flight seemingly decided this stunt didn’t necessitate further protection, under-preparedness is something of a theme you’ll start notice after digging into Tyler’s stunts on social media. I assume Flight and his buddies skip the whole calculating the physics and geometry thing that's typically involved with jumping a bike and instead just kinda pull the trigger and see what happens. A lifestyle I’d argue probably isn’t sustainable for very long, but maybe the fact Flight is still up and walking around proves me wrong.

Flight then gets a good running start and fearlessly goes for it, coming in waaaaay too hot and ultimately overshooting the landing ramp entirely before violently colliding with the pavement beneath him. The 600+ pound FXR obviously bottoms out (and then some), resulting in a cloud of dust from the impact with the force being so strong that one of Flight’s shoes can be seen flying off (something I’ve witnessed when I saw someone get nailed by a car).

MORE PROFESSIONAL JUMPS: When jumping stuff, math is your friend

Before it went all bad. (notice where Tyler is in relation to the intended landing ramp)

Shockingly, Flight doesn’t appear to suffer any noticeable injuries, walking away from the wreck only moments after crashing, hard. Unfortunately the same cannot be said for his FXR which unsurprisingly got pretty trashed. Not long after the initial upload, which now has over half-a-million views between Youtube and Instagram alone, Flight posted several follow-ups regarding the jump-gone-awry.

Flight clearly has a sense of humor (as well as adventure), posting a photo of the Vans he was wearing on Instagram with the caption, “I know everyone was worried about what happened to my new Vans my mom got me for my bday last month…don’t worry they held up just fine… I mean, I’m a little upset that they snapped my pegs clean off from impact.”

Another post was made, showing a picture of him on the bike prior to the jump in which he’s asking Instagram followers to donate a part to "the cause” so he can take another crack at it, as well as another post of him doing full 12 O’clock wheelies on his purple FXR pre-jump.

STUNTS DONE RIGHT: What a calculated stunt looks like

While I do think Flight may be a little nuts, the older posts on his social media reveal that he’s actually a pretty experienced jumper though many of his older videos are on dirt bikes or dirt jumps and not some sketchy plywood ramps that were cobbled together. Since the crash there has also been another post showing another jump going awry at what appears to be the same house. In this video guys on dirt bikes can be seen jumping the thumpers from a ramp on the roof, onto a landing ramp in the driveway propped up by a three-wheeler and a recycling bin, making it pretty clear this is seemingly how Flight and his buddies roll.

I don’t know how I feel about donating parts to what I could have guessed wasn't going to end well, especially when there are like, ya know, starving people and kids with cancer and stuff. However I do highly recommend diving into Flight’s Instagram as it genuinely has some amazingly captivating videos. In addition to launching bikes off of ramps, Flight is also a pretty decent skateboarder, and this probably won’t come a s a shocker, but he has quite a few videos of him eating shit while attempting jumps that he readily admits are above his skill level (or at least were at the time he tried them).

This one is really worth checking out…