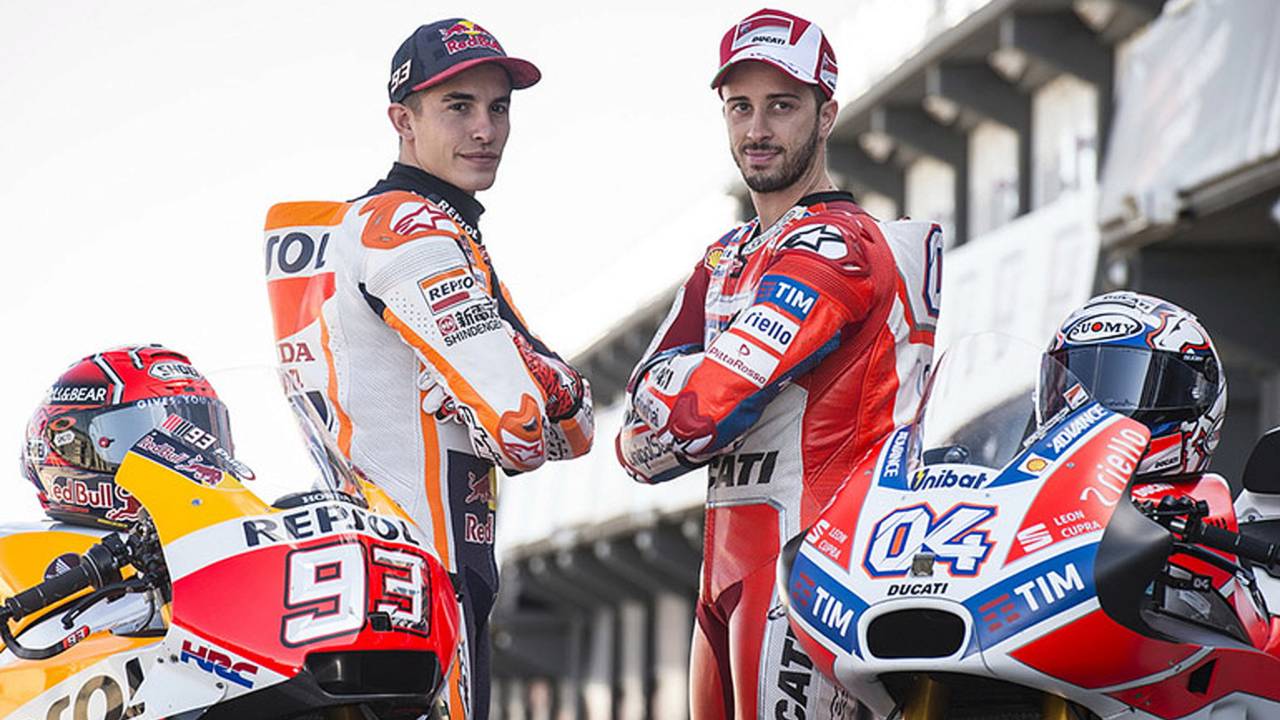 The reigning champion gets a better bike, Zarco enters his sophomore season, three more seasons of Rossi, and one of the most competitive grids of all time.

MotoGP represents the pinnacle of motorcycle racing and technology. The bikes, the riders, the equipment, all the very best of the best. But that’s been true since the premier class’s inaugural season in 1949, so why exactly should you be watching this weekend when the MotoGP season kicks off under the lights of the Losail International Circuit in Qatar? Below are RideApart’s top ten reasons why you should follow the 2018 MotoGP season.

Starting with the obvious, the number 93 Repsol Honda rider is alone reason enough to watch MotoGP this season. Having claimed four out of the last five season’s titles, Marquez’s near-70-degree lean-angle, elbow-down riding style is simply a pleasure to watch. Add to that the fact Marquez’s RC213V has been lacking a bit the last two seasons and supposedly the kinks have been ironed it, meaning we should see what the current world champ is truly capable of in 2018. Despite failing to set a fastest time during any of the test sessions, Marquez has nonetheless been consistently fast and is always towards the top of the pack. Expect a lot of wins and some crazy saves.

Thanks to the series’ addition of a new stop in Thailand, the 2018 season will have a total of 19 races, supposedly making it the longest season in the league’s 69-year-history. A new circuit on the schedule is always interesting as the majority of the riders are often unfamiliar with newly introduced tracks — especially if said track was recently built, lowering the likelihood a MotoGP rider may have experience there outside of the premier class. This element of unfamiliarity often shakes things up and at times leads to an unexpected winner.

Despite the 2017 season getting off to a great start for the Movistar Yamaha freshman, problems with the M1 lead Maverick Vinales to struggle while trying to compete. Despite issues with his mount, the Spaniard managed to finish the season in third place overall in the standings, and in testing he did put in some solid times, albeit had major issues with consistency from track to track. If the Factory Yamaha crew manages to get the YZR sorted out, 2018 may be the year that Vinales dethrones Marquez and Repsol Honda.

While previous years have always had grids full of wildly talented riders, 2018 has a particular competitive field. There are legitimately a myriad of riders who I wouldn’t be surprised to see win the 2018 title. Marquez, Dovi, Vinales, Pedrosa, Rossi, Zarco, etc, all realistically have a shot at being crowned world champ by the time the checkered flag is waved in Valencia.

When Johann Zarco entered his first premier class season in 2017, most fans weren’t expecting too much from the rookie. But after only a few races it became increasingly clear that Zarco has the potential to become a world champion. With nothing to lose, Zarco put the hammer down, hard, and went all out constantly, leading several races, though never finishing at the top of the podium. With a premier class season now under his, Zarco returns for 2018 a more seasoned competitor who is also poised for a factory team seat in the not-so-distant future.

6. More Ready To Race Than Ever

2017 also saw KTM enter the premier class, and despite not having a ton of luck, the Austrian brand still considered its rookie season to be a success, having gained a lot of experience and knowledge, and finishing fifth in the manufacturer standings. Having spent a full season on the RC16, Pol Espargaro and Bradley Smith both return to the Redbull KTM team where they will be joined by test rider Mika Kallio who will pilot an RC16 as a wildcard entry in five races. KTM has invested untold sums of cash into its MotoGP program, so it’s fair to have high expectations for the brand once it gets settled.

2018 will be the rookie season for five riders in the premier class. The fresh faces for 2018 include Franco Morbidelli, Tom Luthi, Xavier Simeon, Hafizh Syahrin, and Takaaki Nakagami who will be joining Cal Crutchlow on the LCR Honda squad. Many have high hopes for Nakagami, and justifiably so, the Honda protege is FAST. He’s also the first Japanese rider to compete in the premier class in four years, and fortunately for Nakagami, he’ll be piloting an RC213V, while not quite on par with the factory Honda protos, the LCR machine is still won races in recent years meaning Nakagami in theory has the tools to get on or near the podium. Though rookies need to give it their all to keep their premier class seat, a rider’s first MotoGP season allows them to go balls to the wall (like Zarco did last season) as nobody is expecting them to win a championship, enabling them to ride harder and push the bike more because if they go down, the points don’t matter in the way they would to someone like Marquez or Dovi.

PREMIER CLASS PREVIEW: What we learned from the 2018 preseason tests

Valentino Rossi is the third most success grand prix motorcycle racer of all time, just behind Angel Nieto and Giacomo Agostini. While Rossi only has nine world titles compared to Ago’s 15, the number 46 Yamaha rider is only one premier class title away from tying the legendary racer’s record. The news recently broke that Rossi has renewed his contract with Yamaha which will see him compete through the 2020 season and having turned 39 last month, this will make the Italian pilot the first MotoGP competitor to race into his 40’s since Colin “The Texas Tornado” Edwards back in 2014.

Like watching a rodeo, or chainsaw juggling, the element of danger involved in racing can make it hard to look away. MotoGP class bikes accelerate faster than a Formula One car, can reach speeds of around 220 miles-per-hour, and lean angles of close to 70 degrees. These are the planet’s most skilled riders piloting the world’s most high performance motorcycles. Put simply: motorcycle racing is just inherently cool, and watching it makes for great entertainment.

In recent years Ducati’s MotoGP machines have seen huge improvements, giving the Italian marque’s premier class team a realistic chance of clinching a world title. However if that happens in 2018, it will almost certainly be achieved by Andrea Dovizioso, and not Jorge Lorenzo. Dovi had a fantastic 2017 season and was a major contender for the championship and though he never clocked a fastest time during recent testing, he never finished more than half-a-second after the best time. Jorge Lorenzo — who had a rollercoaster 2017 season — seems to be struggling with the same consistency problems that plagued him last year. During testing the number-99 rider clocked a fastest time, and then proceeded to finish third to last (out of 24) during testing at the following circuit.