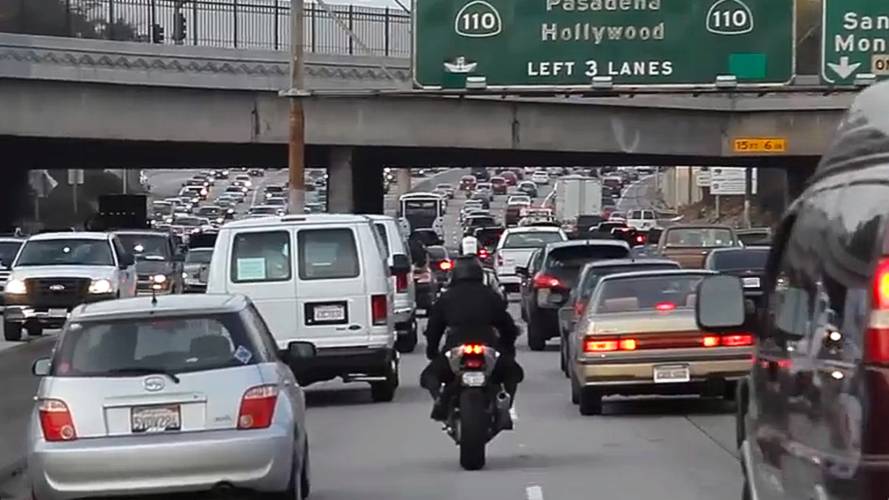 A little consideration for riders from Ford who throws us motorcycle folk a bone with a new patent for self-driving cars to sense lane splitting bikes.

Over the next decade self-driving car tech will become increasingly ubiquitous on public roads. With auto manufacturers, shipping businesses, and tech companies investing in the self-guided technology at an ever accelerating rate, the era of semi-autonomous driving is here. But despite the enormous sums of money being poured into self-driving car development, motorcycles have largely been left out of the equation, at least until now that is. Ford just filed a patent for a new system for self-driving cars to detect motorcycles that are splitting lanes.

While splitting lanes may seem like a foreign concept in Ford’s own backyard in America—with California being the only exception—millions of riders split lanes every day all over the planet. With a sizeable chunk of Ford’s market overseas in countries where lane-splitting is the norm, the investment in this technology makes sense.

Ford’s new patent utilizes three rear-facing cameras connected to a central controller that patches into the car’s other advanced driver assistance (ADA) features to alert the autopilot system to brake or steer when an approaching motorcycle is detected between lanes. This technology could obviously be extremely useful for manually operated cars as well, adding to the growing electronic assist features that modern cars are quipped with.

Back in the summer of 2016, a Norwegian motorcyclist was rear-ended by a Tesla Model S that was on autopilot. Fortunately she survived the collision, but this raises some glaring concerns considering Tesla’s self-driving tech is widely accepted as some of the very best on the market.

Not too long ago a myriad of cars from different manufacturers had their FCW (forward collision warning) systems tested to see how accurately said systems could identify a motorcycle and some 40 percent of the time the FCW systems failed to detect the presence of a motorcycle. When these same tests were ran on a midsize sedan, the four-wheeler was recognized by the cars’ FCW systems more than 95 percent of the time, suggesting a lot more work needs to be done on the motorcycle side of self-driving vehicles.

One very real concern is that once self-driving cars became the norm, motorcycles could be banned from certain roads, so it’s great to see Ford invest in a technology that considers us two-wheels enthusiasts.

You can check out the entire patent here.