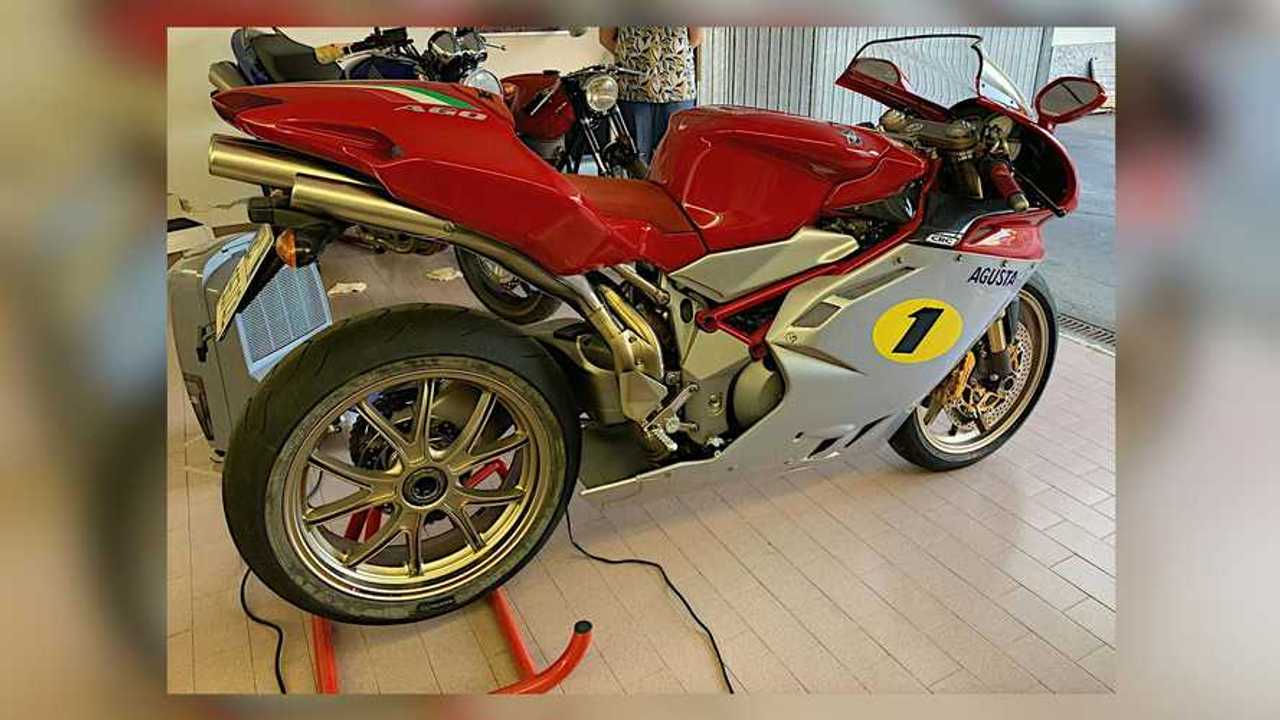 Real deal or no go?

We tell you about plenty of bikes for sale that interest us for a variety of reasons. Whether they’re rare, beautiful, weird, hideous, or some combination of the above—they're usually remarkable in some way. You can file the one I’m going to tell you about now under “things you don’t expect to find on Facebook Marketplace.”

What if I told you that someone was selling a rare 2004 MV Agusta F4 Ago—number 145 of only 300 ever made? They’re rare, but they do come up for sale every once in a while—usually through one auction house or another. If the listing on this one is to be believed, however, then it’s truly a gem among gems.

In an Italian-language Facebook group for people selling all things related to the MV Agusta F4, F3, Brutale, and Rivale, a user calling themselves “Transalpine Holding” is currently selling the aforementioned Ago. The thing that makes it ultra-rare, he claims, is that the first owner of this particular Ago was none other than the man himself, Giacomo Agostini! The seller says that it comes with a certificate of authenticity (not pictured, of course), as well as Ago’s signature on the saddle.

In the listing, he says that it’s never been ridden, but was prepared by Cagiva prior to delivery. He adds that it’s in 100 percent original condition, with no scratches or other damage, and that it was always stored in an air-conditioned and dehumidified environment. It was also maintained while it was in storage, although he does not give details. The asking price for this unique Ago: €300,000, or about $356,736. Don’t worry, plenty of people in that Facebook group think that asking price is completely bonkers. If you speak Italian, get some popcorn and dive into those comments for a good laugh. Even non-Italian speakers can get a more than adequate giggle from reaction gifs and judicious use of Google Translate.

One person commented that they remembered Agostini owning one of the first numbers of this bike, and asked about this one being number 145. The seller replied that he would ask Agostini about it soon and provide evidence, but for now, uploaded the photos you see of the man sitting on what he claims is this exact bike in a magazine photo shoot. Examining those images, you can see that he is indeed sitting on an Ago, but it’s unclear whether it is the exact same bike the seller claims.

If you’re wondering why someone looking to sell a one-of-a-kind bike like this for €300,000 couldn’t either take better photos, or else pay someone to take better photos—you’re not alone. Do you think it’s an exceedingly sketchy premise, or a seller who doesn’t quite know what they’re doing trying to flog this bike online? I’d lean toward the former, myself. However, if that's the case, why would you list it in the kind of niche Facebook group where most people will probably know better? Something doesn't add up here.