A dedicated tracker like the Monimoto 7 will do a much better job.

Despite the latest security systems and alarmed disc locks, motorcycle theft persists. Also, most preventative security measures only protect owners up to the point of theft, leaving them without options once the dirty deed is done.

Some motorcyclists see Apple’s new AirTag technology as an alternative. Utilizing Bluetooth, the tracking markers leverage Apple’s extensive network of iPhones to locate the lost item. However, AirTags are more suitable for locating lost keys or a wallet, not a stolen motorcycle. Here's why you should buy a dedicated tracker like the Monimoto 7 to locate your bike if it gets nicked.

In the event of a theft, an AirTag will notify the nearest iPhone of its presence. If the thief happens to own an iPhone, this will alert them to the fact they’re being tracked. Even worse, the AirTag will start emitting a sound if it isn’t found in a timely manner, allowing the burglar to locate and remove the device.

Established in 2017, Monimoto specializes in motorcycle security with 15,000 active users worldwide. The brand's latest smart GPS tracker, the Monimoto 7, limits alerts and location updates to the user, not the thief. This feature allows the authorities to track down and potentially recover the stolen motorcycle.

Additionally, if a thief transports the pilfered bike to a remote location, the AirTag is less likely to find an iPhone to ping. Instead of relying on a large user base, Monimoto’s GPS and GSM (Global System for Mobile Communications) technologies can pinpoint the motorcycle’s whereabouts wherever it's hidden.

Equipped with LTE-M cellular data technology, the updated Monimoto tracker not only has increased battery life but also expands the device’s network coverage even farther than before. The enhanced connectivity can deliver a network signal in most remote locations and hard-to-reach areas such as underground parking garages. That comprehensive coverage ensures the user receives accurate notifications while thwarting thieves’ attempts to obstruct the Monimoto 7 signal. 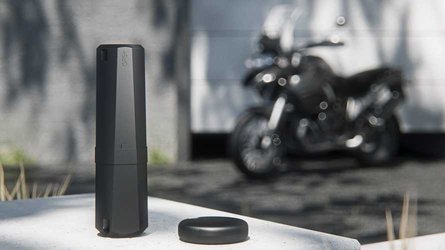 Though Apple’s AirTags may help locate lost items, they aren’t a feasible means of fighting motorcycle theft. Unless you’ve misplaced your motorcycle between the couch cushions, it's best to equip your keys with AirTags and trust your bike to Monimoto. The Monimoto 7 GPS tracker costs $199 with a $49/year SIM card subscription for its dedicated LTE cellular data connection. It's a small price to pay for knowing where your bike is at all times, no matter what.

By: Sponsored
++
Got a tip for us? Email: tips@rideapart.com