You’ve probably seen the video by now. A truck dashcam captured the moment a rider on a yellow sportbike entered a highway off-ramp, drove right into the shoulder barrier, went over the handlebars, and off the ramp. The incident happened in Montreal, Canada, on April 29, 2020. As expected, the local media adopted the usual, lazy, old, and boring “speed was a likely factor" approach to oversimplify the causes of a crash that could easily have been avoided. That’s because nobody involved in the article seems to know about target fixation.

Instead of saying that the rider was inexperienced, it's simply easier for everyone to agree that speed is to blame. You know, that non-sentient factor the guy was able to control with the throttle and the brakes but failed to do? 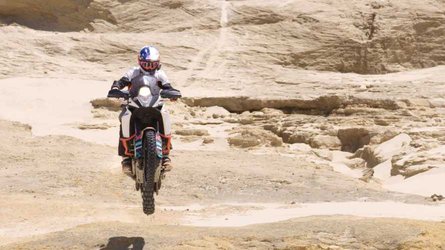 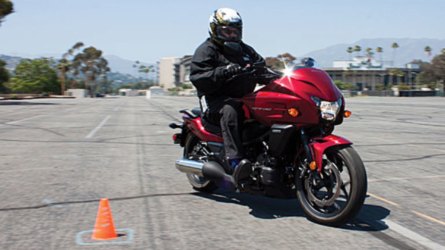 5 Ways You Can Hone Your Riding Skills

Since most people won’t read between the lines—let alone read the article itself—what they’ll take from that headline is that the guy was riding like a maniac, which will only strengthen the generalized opinion that motorcyclists ride fast, hard, and dumb. Sigh. Fine. I'll do what the reporter should have done and break down what most likely happened instead of rehashing the same boring excuses.

Before we get into this, don’t worry about our dude. The unidentified rider was lucky and, while he sustained severe injuries, they are thankfully not considered life-threatening. Sounds like our guy is going to be fine.

We don’t know much about him or his background but what we do know is that he had the trifecta of ingredients for the recipe for a perfect disaster. He didn't have a motorcycle license (one strike), the bike he was riding on wasn't registered (two strikes), and he was an inexperienced rider (three strikes, you’re out.)

Why didn't the media outlet focus on that element instead of pinning the incident on speed? I suppose because it doesn’t sound as exciting as a “spectacular crash caused by speed”. Thing is, speed isn’t the culprit here; the lack of experience is.

If we’re going to be technical, we could say that he was going too fast, but not by road regulations standards. He wasn’t riding much faster than the truck driver that was doing 30mph when the crash happened in front of him. He was going too fast for his skill level, though, which takes us back to the lack of experience and training argument.

Looking Where You Want To Go

What went wrong? The likely answer is target fixation. At least, that's what the observable chain of events seems to suggest. You can see the rider enter the curve at full speed, cut through the elbow in a straight line, and head straight for the wall with little to no course correction. There are no apparent signs of any attempt at an emergency maneuver and he hits the brake inches away from the wall, when it's already too late.

How do I know? Because I’ve done it. The only difference is that my training kicked in and I was able to react accordingly, control my speed, and rapidly turn my gaze where it needed to be. But that takes practice and experience. Inexperience doesn’t turn into experience by magic.

That’s where training comes in handy and that’s where the amount of time you spend in the saddle practicing in a safe environment makes a significant difference.

How 'Bout Some Training?

There is a reason courses like the ones offered by the MSF are highly recommended to anyone getting started on two-wheels. I’m actually surprised they’re not mandatory, to be honest. Sure, the lessons can be expensive, but that’s the nature of the beast, right? If there’s something we all know is that skimping out on anything that’s motorcycle related, whether it’s gear or training, can be the difference between getting injured and getting severely injured.

Rider training allows you to make all the mistakes you will make in a controlled environment instead of making them out on the road where there's a higher price to pay. Riding a bike is one of those things you shouldn’t be cocky about.

You wouldn’t swim with sharks or skydive without proper training, right? At least, I hope you wouldn’t. Then again, you’re a grownup and I’m not your mom. What makes you think that riding a motorcycle doesn’t take as much if not more guidance and training?

What happened here could have been avoided had the rider been better prepared for it. He crashed because of a mistake he made, not because of an exterior factor out of his control. We don’t know who the rider is or what the story behind this ride is but the fact that he didn’t have a motorcycle license alone screams inexperience and “he should not have been in this situation in the first place”.

Obviously, instead of taking the story as an opportunity to promote healthy riding habits and proper training, the articles reporting on the incident focus on the element of "speed" because "that's what the police said". The reporter even throws in a shaky comparison with a handful of irrelevant, unrelated events for good measure that all have something to do with speed and nothing to do with the crash.

Speed is bad. Speed is evil. Speed will kill you. Speed is a predator and definitely not something you can control with common sense and a throttle.