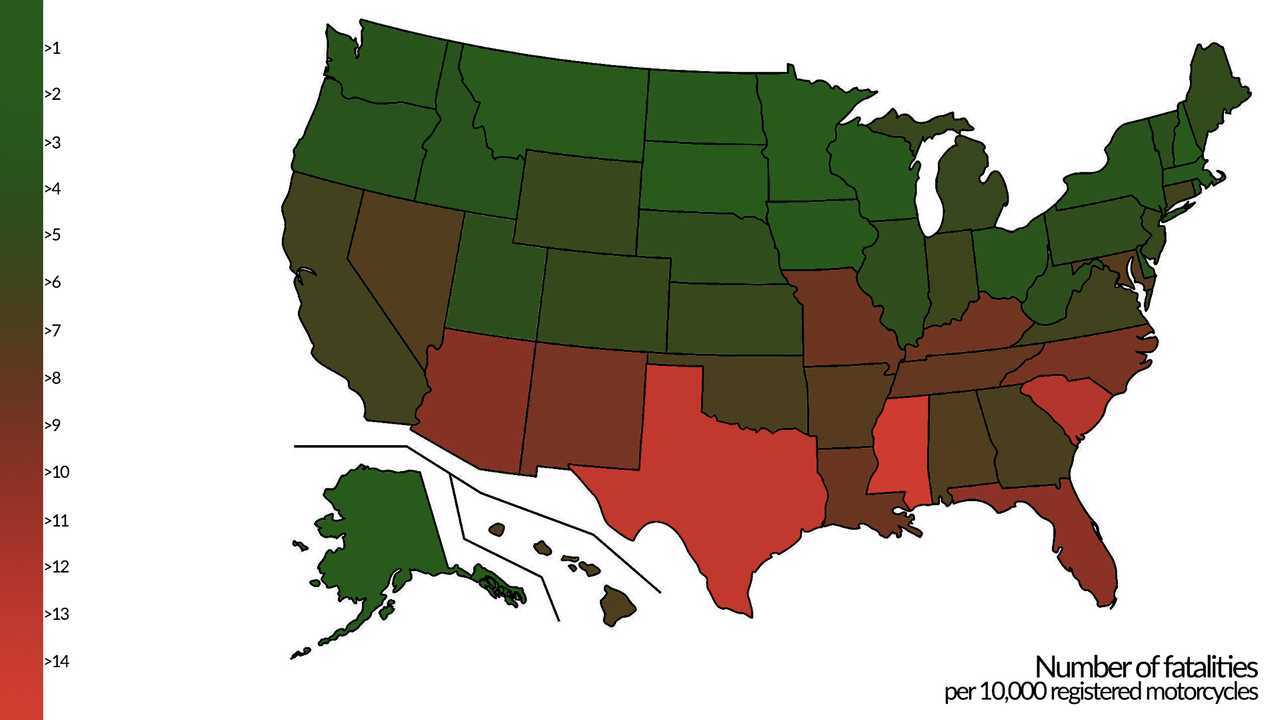 Here are the hotspots for incidents.

There are always risks to riding a motorcycle, wherever you are in the United States or in the world. Safety is paramount everywhere and anywhere. However, here in America, there seem to be certain hotspots for motorcycle fatalities. Of course, a number of factors contribute to those numbers. Here’s a look at how states rank in motorcyclists fatalities.

A Portrait Of The US:

QuoteWizard did all the legwork, diving into the 2017 NHTSA and Federal Highway Administration (FHWA) data to come up with a portrait of motorcycle deaths in the United States. The firm found out that in 2017, there was a total of 8.4 million motorcycles registered motorcycles in the country (a number that reached 13.3M in 2018).

Of course, looking at the map, we notice a bit of a pattern: the southern states rank towards the top of the list since the riding season is much longer than in the north. However, looking at states such as sunny California, which had the highest number of registered bikes for 2017 with close to 850,000, the average is much lower than say in Texas that has less than half the number of registered bikes and almost as many fatalities. So climate and weather aren't the only variables that influence the numbers. Tourism, financial portrait, and safety requirements such as helmet laws can also have an impact.

The sad number 1 goes to Mississippi, where 40 fatalities for 28k motorcycles have been reported, resulting in an average of over 14 deaths per 10,000 bikes on the road. While you would expect Alaska to have the lowest rate of fatalities, the title of “safest” actually goes to Montana where out of a staggering 306,655 motorcycles, 23 deaths have been recorded for a rate of 0.75.

One death is one too many, so wherever you fare from, whether you are riding in Mississippi’s riding hotspot or on Montana’s safe roads, you are never too cautious while riding your bike. Be safe out there and let’s bring these numbers down.