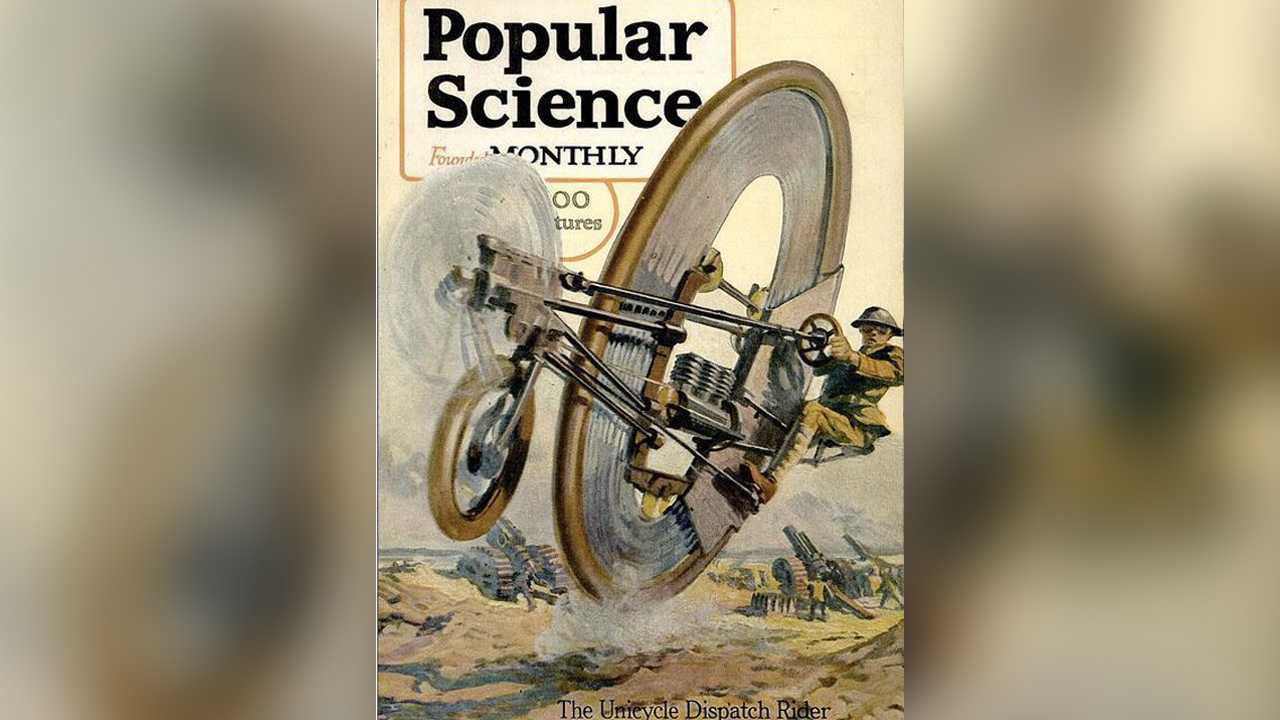 What’s wrong with this picture? So many things.

Monowheel and motorized unicycle concepts have come and gone. There’s obviously been a renewed fascination for single-wheeled vehicles dating as early back as Da Vinci. As creative as those concepts have been, however, none has ever really made it into production and to the mass market. Custom shops sometimes tackle the project, but nothing has superseded motorcycles. One of these concepts is so farfetched that an unnamed author for Popular Science wrote about it and detailed everything wrong about the concept. And it’s perfectly hilarious.

IT'S A WEIRD WORLD

The year is 1917. The September issue of Popular Science Monthly documents a concept designed by obscure inventor and modern man A. F. d’Harlingue, a name that for reasons we’re about to discuss didn’t go down in history. His creation: the air-propelled unicycle. Tucked between an article that documents the “biggest Red Cross flag ever” and one that makes a few suggestions to simplify house keeping, we get to discover the unicycle concept and everything that’s wrong about it.

The idea behind the concept is fairly simple: a unicycle with a massive main wheel and a smaller one at the front for steering purposes, powered by an engine connected to a propeller located at the front of the vehicle. The rider is perched on a rear-mounted frame supporting a saddle. The closer you look at the technical drawing that identifies the vehicle’s bits and pieces, the more you realize why today’s motorcycles don’t look like this.

The layout is even compared by the author of the article to the American Star Bicycle, an 1880 New Jersey invention characterized by a minuscule wheel at the front and a gigantic wheel at the back attached to a triangular frame—think of a funky, inverted penny farthing.

The first thing that comes to mind when looking at the invention the publication calls “curiously ingenious” (riiiight) is: how the heck does the rider see where he’s going? The floating seat positions the rider perfectly aligned with the vehicle’s massive 10-feet-across wheel, which poses a very obvious visibility constraint. There are many reasons why the rider is positioned above the wheels rather than in-between on a bicycle or on a motorcycle—being able to see is one of them.

The ergonomics are also problematic in every possible way; the unicycle’s steering wheel is positioned on the left hand side of the wheel—we guess he had to pick a side. As for the brake pedal, it is located somewhere around the rider’s mid-shin when his foot is resting on the peg. Considering the author suggests that according to the diagram, it is estimated that the vehicle could have produced something like 80 horsepower, standard braking would have been an issue—let alone emergency braking.

The author also describes how the layout suggested by the creator would result in tremendous amount of resistance and loss of energy. While it does feature an engine—seemingly an inline four according to the diagram—the power is sent to the propeller which pulls the unicycle forward instead of powering the roller discs mounted to the main wheel. More energy is required and is lost in the process since power needs to be transmitted to the propeller via a 6-foot-long drive chain—6 feet—that in turn has to gain enough momentum to be able to pull the weight of the vehicle. The author comments that an airscrew (or propeller) of this size only provides a fifth of the efficiency and a tenth of the capacity of a screw. He adds that going uphill, the unicycle would be limited to “very low speed with high fuel consumption.”

That’s not to mention the danger of having a propeller protruding at the front of the unicycle. Plus, considering the front wheel is meant to lift up as the vehicle gains speed, this means it cannot serve its purpose as a steering member at higher speeds, which in turn complicates navigation.

The author suggests that a spin off of d’Harlingue’s idea could offer more potential, provided the front wheel is eliminated and the engine is directly positioned behind the propeller—among other things. Spoiler alert: the idea never made it past 1917. Modern unicycles have eliminated the airscrew altogether, finding more advantages in propelling the main wheel directly. The Century-old article that describes the contraption and its flaws is a little treasure of history worth checking out.