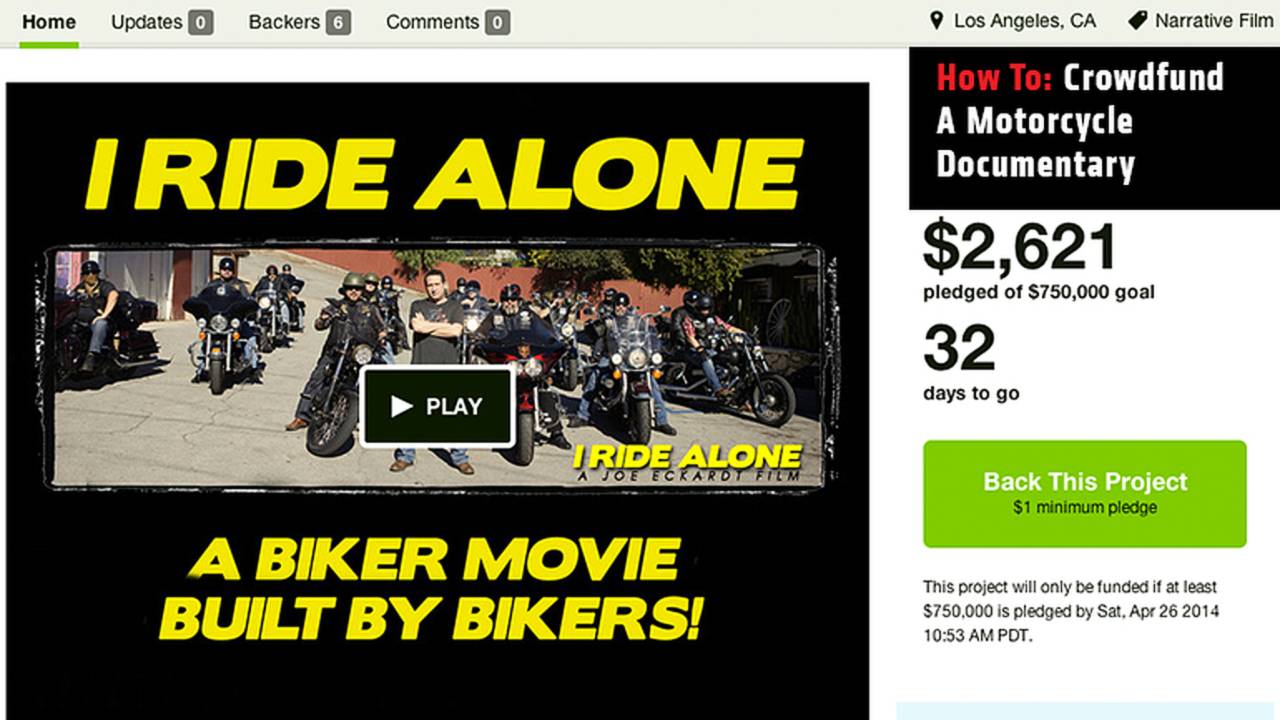 RideApart receives tips from professional independent movie gurus on how to crowdfund a motorcycle documentary.

Acquiring funding for new movie production or personal project is a very tough proposition for the indie producer. With a few notable exceptions run by celebrities (e.g. Veronica Mars & Zach Braff), big studios seem to have a lock on funding sources and top talent. Yet there are a constant stream of indie optimists that emerge at film festivals all over the globe (e.g. Senna and 1).

A new source to fund start-up businesses, including movies, has been found through crowdfunding web entities like Kickstarter, IndieGoGo and Crowdfunder (Forbes top 3 recommends). If you're not sure how it works, any idea or start-up concept can be presented in front of a global audience. They can take the form of an art project, product design, music album, or even an independent film. The promoter posts the goal funding needed to realize said project via a grassroots "commercial". Once they reach their goal funding it is unlocked and transferred to their account to fund the project. These sites are visited by millions of people from around the world with varying degrees of income that put-up a comfortable amount of money to help those promoters create their dream projects, generally with non-momentary payback expected.

This is where producer Joe Eckardt and his film project “I Ride Alone” needs to alter the marketing of his Kickstarter campaign. Mr. Eckardt may be a little too aggressive with funding his entire project right out of the gate. While modern motorcyclists are rarely comprised of a monolithic group of hog riders wearing black painted tupperware bowls on their heads as seen on his Kickstarter site, they are united in participating and spreading the joys of riding. Instead, Mr. Eckardt should explore a phased approach in order to open up the funding sources of this movie to a wider group of riders, even better, a wider group of people. The marketing of this film should explore the meaning of riding independently and in cooperation with that a funding goal that's palatable to viewers and would be funders.

While I wish Joe luck in realizing his vision, I spoke with several professional indie-film production/marketing gurus and gathered some alternative funding tips for those who might not be as financially ambitious as Mr. Eckardt. Lisa Smithline, of Cultural Front Productions.  Ms. Smithline has a long history of successful Indie campaigns, including Academy Award nominated TROUBLE THE WATER and Stacy Peralta’s CRIPS & BLOODS: MADE IN AMERICA.  She has a several suggestions for Mr. Eckardt:

I hope Mr. Eckardt, and those who are inspired to follow their own indie-movie passions, consider these suggestions and retools his project funding efforts.  Once he does, the movie’s plot reads like a winner. I hope he succeeds in in film project.