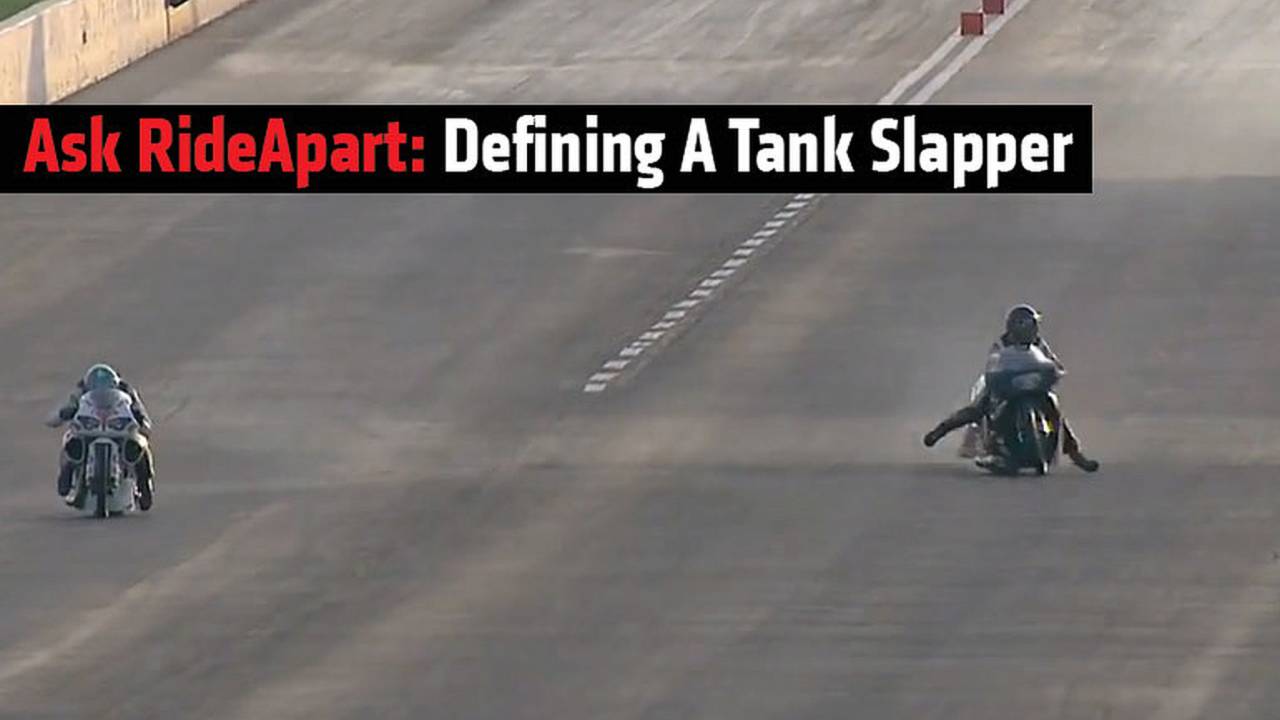 We discuss what defines a tank slapper. With videos for examples, we show out-of-control bikes and how to save yourself from one.

Last week we shared a video on our Hell For Leather Facebook page of an NHRA race that showed Swedish Pro Stock racer Elvira Karlsson's run where she temporarily lost control of the bike after the clocks. It's obvious in the video that the bike began to drift towards the wall. In the shut-down area she tried to slow down while steering it back on track. A puff of smoke followed by a violent shake, and then a quick tank slapper before she was able to gain control again.

We posted the video and one of our fans, who goes by Ricky, disagreed that this was in fact a true “tank slapper.” Naturally, we asked him to elaborate. "A tank slapper is caused by the handlebars and forks slapping from side to side. Look at the video again. She broke traction on the rear wheel.", Ricky explained.

It got us to think a little deeper about the term. Most tank slappers happen when the front wheel breaks traction, becomes airborne or somehow leaves the track of the rear wheel, causing the frightening chain reaction. Every bike naturally wants to go straight (or tip). When the front wheel leaves the track of the rear wheel the front forks pull hard to get back in line. This causes the front forks to have too much momentum and sling past the straight line and to the other side, starting the process over again. Sometimes you can correct, sometimes you can't.

Speed wobble, head shake, death wobble and shimmy are different terms used for the same action of a "tank slapper." It's slang which refers to the action of the front forks violently "slapping" back and forth. It feels and looks like a horse trying to buck it's rider. The general cause is a problem with the front wheel, but either way, the term "tank slapper" refers to the action despite the cause.

Remember last week’s talk on counter steering? A single-track vehicle has to lean in order to turn. The front wheel doesn’t want to steer any other direction but straight, unless the bike is banked or leaned over. If you yank the wheel one way or another while riding, it will cause a lean, but if the front tire is off the ground when it turns and comes back down out of line, that will cause a wobble.

It's either your fault or the motorcycle's. If the front suspension rebound and compression is way off it can possibly bounce the weight off the front tire. Grabbing a handful of throttle as you speed-shift into a higher gear can cause the front wheel to be airborne without knowing it. If you have a death grip on the bars when this happens and unconsciously push the handlebars, it can cause a tank slapper. The bike can also be set up wrong. Too high in the front or too hard suspension in the rear, these issues can be a root cause of the problem, but again, it centers around the wheels coming out of line.

A lot of riders, like the video below, twist the throttle hard and unknowingly push or pull on the handlebars. When the power of the bike lifts the weight off the front end, you guessed it, a tank slapper can ensue.

Ricky has a point and brings up a good debate about the video. It looks like the issue for Elvira started as a weave when the rear tire lost traction. A weave is where both tires struggle and fight to get back in line and is similar to a tank slapper.

Normally a weave happens at high speeds when you have too much or too little drag in the neck, mismatched tires, too little weight or unbalanced weight, etc. Elvira tried to lean away from the wall as the bike slowed down from a high speed, while fighting the weave. During the weave the front tire came out of the track of the rear tire, simultaneously causing a tank slapper. There was smoke rolling off the rear tire right before the incident which had to be the start of the issue.

Tank slapper, is just a slang and not always clear to define. Simply put, it sucks. Stopping a tank slapper from ever happening is more important than defining one, however. Make sure your bike is set up properly and wants to go straight. Mismatched tires, improper balancing, bent front wheel (my last bike had that) or a cocked wheel can definitely cause issues.

A common cause for sport bikes is too much power. The front forks are designed to take little effort and precise placement to work properly. Having a overly firm grip on the bars or forcing too much weight onto them can cause a tank slapper when power lifts the front end. Oh and coming down off a wheelie the wrong way can hurt too.

How to get out of one? Some riders say to not throttle out of it, but let off the power and grip the bike with your hips. This is a similar instance as to a throttle hanging. You can be instructed on many different recovery methods, but in a panic situation you may tend to forget it all as you feverishly try to save yourself from an accident.

Riders I've personally witnessed, experts and video tutorials all say lifting off the gas is the best method. If you can't save it at least you're going slower when you lay it down.

The above video is a weave or wobble. It shows how the bike naturally wants to go straight and once it begins to slow, the wobble goes away.