How To Ride A Motorcycle With A Broken Clutch Cable 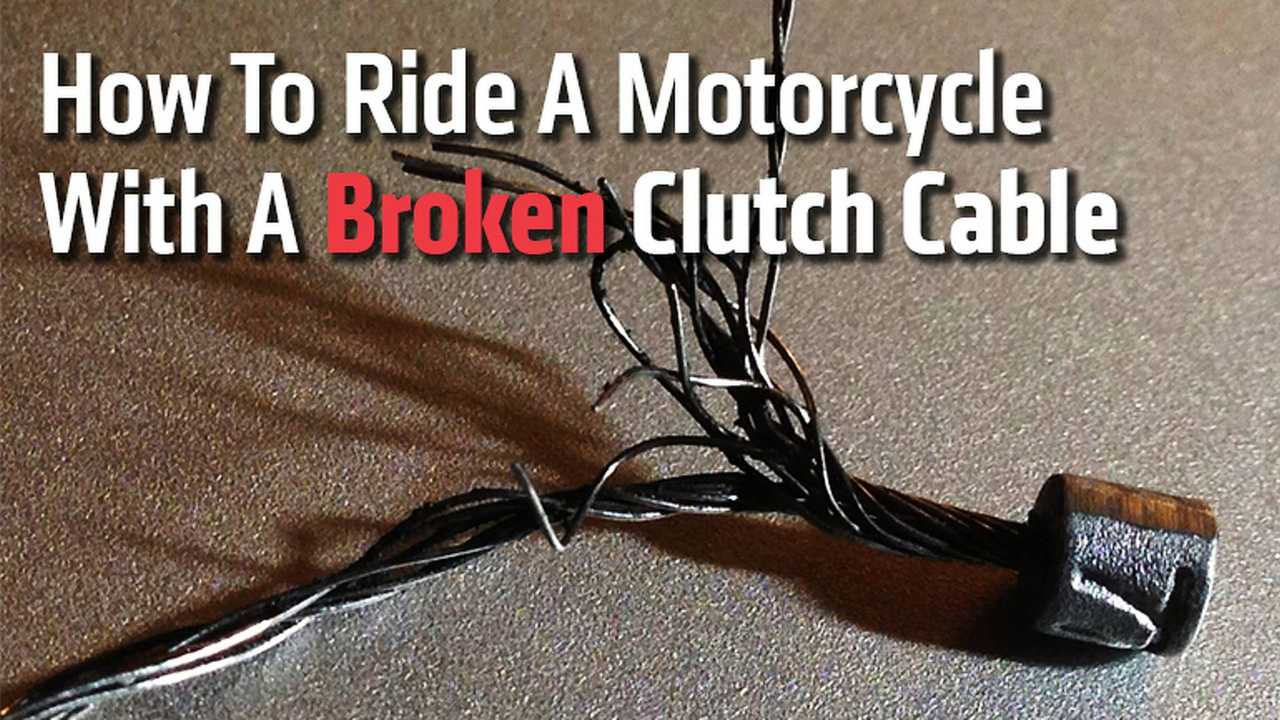 Can you ride the bike home without the ability to disengage the clutch? Of course you can (but there's no shame in pushing). We break it down into 7 steps.

Your clutch cable snaps, leaving you without the ability to disengage the clutch. Can you ride the bike home? Of course you can. Here’s how to ride a motorcycle with a broken clutch cable.

Note: These instructions are equally applicable whether you have a cable-actuated clutch or a hydraulic one. They do not apply if your actual clutch mechanism breaks, in which case you’ll be calling a tow truck.

Step One: Prevent It From Happening

The lucky thing is, breaking a clutch cable is a rare occurrence. Grease yours once a year or so and replace it every 30 or 40,000 miles (consult your owners manual for service schedule) and you’ll likely never break one. Clutch cables break by fraying, popping one strand after another over time. So it’s also something you can keep an eye out for, not something that’s likely to happen without warning. Make inspecting the head and tail of the cable part of your routine pre-ride bike inspection, along with tire pressures and such.

You can also be left unable to pull the cable if you break the lever in a spill. Preventing broken levers is actually simple; versions designed to fold in case of impact are common in the aftermarket or you can make your own by sawing halfway through the lever, three quarters along its length with a hacksaw. Doing so creates a natural stress relief point; the lever will snap there in a crash, leaving you the remaining length to work with.

Step Two: Arm Yourself For The Possibility

Long distance, self-supported riders who plan on being a long way from mechanical help often duct tape or zip tie spare cables alongside the current ones. Cables take up little space and weigh virtually nothing, so there’s no real penalty in doing so and the benefit is quick repair; with the cable pre-routed, you won’t have to do anything but connect it in order to get moving again.

If that’s overkill for you, consider packing a small pair of vice grips in your tool kit. Those are a multipurpose get-you-home item, working equally well as a shift or brake lever as they do holding onto the end of a broken cable.

Riding with a broken clutch cable is possible, but by decreasing control over your bike it adds an extra element of risk and complication. If your route home (or to a mechanic) involves crossing a city and you’re within cellphone reception, balance the risk and challenge of riding the bike with just waiting for a buddy to come get you in his pickup truck. The last thing you want is to damage the bike (or yourself) further.

Does your bike have a failsafe, preventing it from starting if the clutch lever’s not pulled in? If so, the switch is likely in the clutch perch, so you’ll still need to pull the lever in to start, even if it’s not connected to the cable.

With the bike in neutral, start the engine and get it rolling up to about 5 or 10 mph. A hill helps here, as does a buddy riding alongside, pushing you with an outstretched leg. Or, just run alongside the bike until you’re up to speed, hop on, and click up into 2nd gear.

Alternately, you can use the bike’s starter motor to get it moving. Again, use 2nd gear and, when the coast is clear, thumb the start button and give the bike a little gas as it begins to move. It should fire the engine after a few revolutions and you can then accelerate away.

1st gear is simply too short and abrupt on most bikes, but your mileage may vary.

This is the easiest part. You probably already know how to upshift without the clutch (apply upwards pressure to the shift lever, close the throttle a bit), but downshifting is nearly as easy. It helps to have the engine spinning low in the rev range, then just apply the normal amount of downward pressure to the shift lever, hold it there, close the throttle a bit and the lower gear will slide home. Downshifting without the clutch can be a jerky affair.

Step Seven: Coming To A Stop

Coming up to a stoplight or stopped traffic? Start slowing well ahead of time, giving you the opportunity to downshift without the clutch. Try and find neutral before you have to come to a stop, then just coast to a halt modulating your speed with the brakes. If you can’t find neutral (don’t underestimate how recalcitrant some gearboxes can be), then you’ll need to stall the bike at a stop, just use both brakes to make sure you do so without jerking forward and be prepared for that jerk and to catch the weight of the bike when it happens so you don’t fall over.

You’ll need to follow Step Five again when it comes time to pull away. Obviously this would be a huge pain if you have to do it every half mile, crossing a city and exposes you to the unpredictability of other traffic at each and every stop. You can mitigate the hassle somewhat by rolling through stop signs or choosing routes with fewer intersections.

Just be careful, the cars around you aren’t likely to understand the unique challenge you’re facing and may fail to anticipate that you’re going to come to a sudden stop when you stall the engine or that you’re going to pull away slower than normal. Keep safety as your first priority and resort to riding without a clutch cable only when it’s absolutely necessary. There’s no shame in pushing.

Check Out: How To Fix 5 Common Bike Issues