Buying a New Or Used Motorcycle: Which Is Right For You? 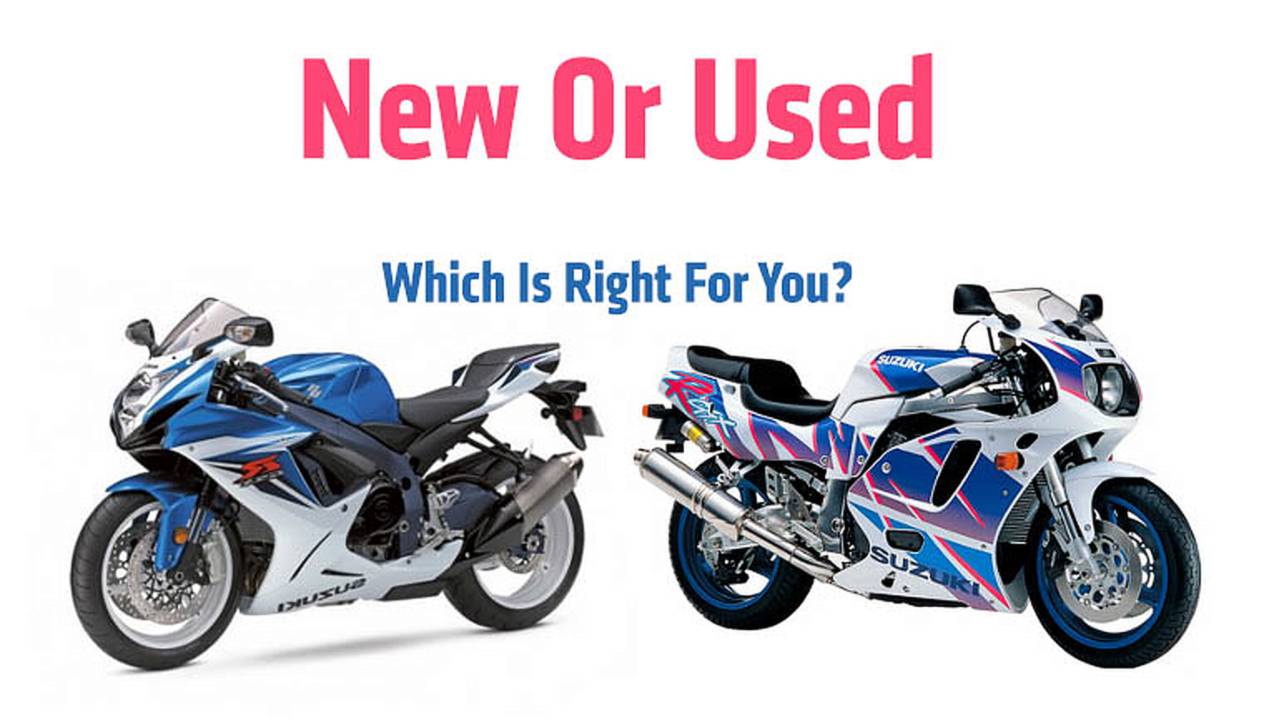 It's a tough choice.

It seems like every time we publish an article about a new bike and talk about it being a good deal or economical, we get a lot of comments asking why anyone should buy that bike over a used bike with higher specs. There are lots of great deals on sites like eBay, Craigslist, or Cycle Trader and used bikes are a wonderful option for a lot of people, but which is right for you?

You Need A New Bike:

This is obviously a very tough area to give any kind of definitive advice, because we can never really predict what kind of deals will be available in your area, your ability to travel to pick up a motorcycle or what kind of mechanical state that any of the used motorcycles you'll go to look at will be in. I'll be using eBay listings for my examples, since LA's Craigslist wants to charge $7k for non-running 1970s CBs and all the 600cc supersports have been on a YouTube video with someone stunting on the freeway. Here are some things you'll need to consider when motorcycle shopping, no matter where you are or what you are looking for.

Used bikes are cheaper than new bikes. Shocking, right? Part of the draw for buying used is that, not only do you not have to pay for things like setup, delivery, and dealer fees, but the motorcycle will also have been depreciating since the moment it was ridden off the lot. As an example of depreciation, this 2012 Suzuki GSX-R600 has zero miles and is listed for only $7,999, while the MSRP of the brand new 2013 GSX-R600 is $11,599, which makes that 2012 seem like an amazing deal until you realize the MSRP and sticker prices in dealers aren't necessarily the same; Cycle Trader lists multiple new 2013's at $8,999 to $9,999. Looking at actual used motorcycles that are being privately sold, the prices get even lower. Here is a 2009 GSX-R600 with 11,695 miles for $5,995 or look at this 2007 GSX-R600 with 10,953 miles, complete with a trailer and tie downs for only $4,500. That last one says it comes with some riding gear, has LED lights and an aftermarket exhaust, but that it has also "been laid down at 10 mph and has some minor scratches." Which brings me to my next point...

We've all seen this one in an ad before. "Bike was dropped once in a parking lot," or how about this one, "bike needs new battery and minor work." The reason you pay so much less for a used bike than a new one, besides the fact that it has actually been used and is no longer new, is that once you purchase it, there is no turning back. That minor scratch could have been caused by being accidentally tipped over, or it could be from a low side where the owner fixed and buffed the tank, while deciding to sell it instead of fixing the frame damage. That other bike could just need a new battery and the carbs cleaned a little, or it could have been sitting in his barn and the engine seized with rust.

With used bikes, you will never really know what has happened in its life before you got your hands on it. Motorcyclists tend to be enthusiasts, more so than car owners, and many of us upgrade or tinker with our bikes. It's awesome when you buy a bike with aftermarket exhaust installed, less awesome when the guy before you tried to wire HIDs without any idea of how to do it; hacking the wiring harness to pieces in the process. Buying a bike used leaves a lot of unknowns and opens you up to a lot of risk. When you buy a new bike, it usually comes with a 12 or 24 month, unlimited mile warranty. This is not going to cover you low siding it or riding it into a lake, but it will cover any mechanical defects.

There can also be hidden costs in used motorcycles when it comes to maintenance. It's important to look at service records to determine if you're going to need to replace the chain, brakes, tires, oil or adjust the valves a week after you buy it. That $5000 used Triumph Bonneville just became a $6000 purchase if it has 11,500 miles on the clock and is due for a major service visit.

Your Own Mechanical Ability

All of my friends have wanted cafe racers for the past few years (luckily that's turning into adventure bikes more and more) and I would get numerous texts every month that read something like, "Hey, I want to get a bike. I found this 1975 Honda CB750 on Craigslist for $3,500. Should I buy it?" Everyone knows a guy that knows a guy that bought one for some insanely good price and the bike ran forever, but it's so incredibly rare that it sets an unrealistic expectation. In the beginning of my motorcycle career, I found myself falling for the same traps, the ones I bought even ran at first. The problem was that I have far more intellectual intelligence than mechanical intelligence, so when those bikes broke down I was forced to beg friends to "take a look" at them or try and find someone who specialized in 40 year old Honda motorcycles (those guys are becoming harder to find and they are starting to realize how much they can charge idiots like me).

The point is, if you grew up rebuilding engines and are mechanically inclined or you feel extremely comfortable learning to rebuild a motorcycle, go ahead and take the risk. If you're like most people these days and that's not your forte, look for a newer used bike, preferably a model that people don't tend to do irresponsible things on, and minimize your risk in the used bike market. Or, just go make payments on a new motorcycle and enjoy that beautiful warranty.

This is another no brainer, but new bikes come with the latest technology. As bikes get faster and better, new technologies are being added that help keep you safe on the streets. When looking at new bikes versus used bikes, it's important to consider things like ABS, adjustability, fueling, and suspension/brake components when evaluating what any motorcycle is "worth." You will have to dig deeper into used bike listings to try and find information about their inclusion of these technologies.