What To Do When The Police Pull You Over 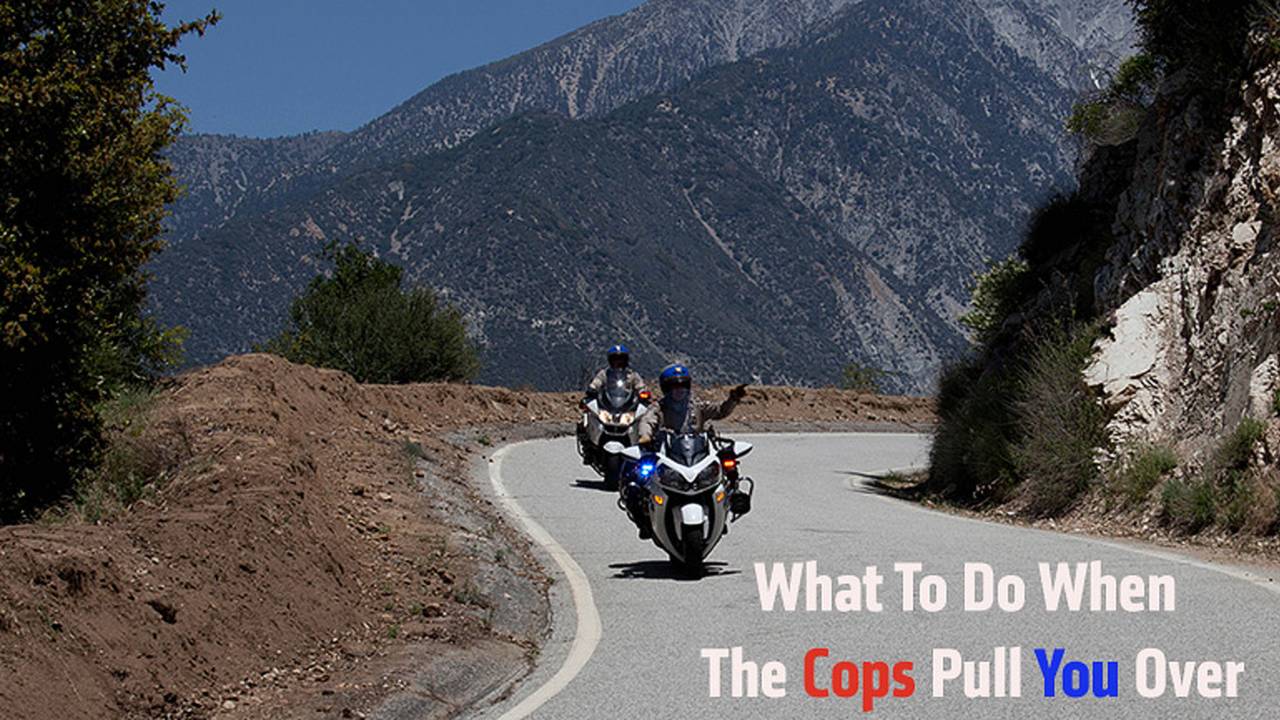 PoPo got you down? Here's what to do when the police pull you over on a motorcycle.

There you are, minding your own business, doing 10 mph over the speed limit, when Johnny Law pulls out for a bit of revenue gathering. Being the law-abiding citizen that you are, you pull to the side of the road. But, what comes next? This is what to do when the police pull you over.

What You Need To Have With You

License, registration and proof of insurance. For the bike you’re riding and it all needs to be up-to-date and valid. It can be a good idea to keep your documents in a sealed, waterproof bag under your seat where they’ll remain in good condition and where you can’t forget them. Never borrow a friend’s bike or rent one without first making sure you have all the papers and that those papers have the right dates on them.

What You Need To Have On Your Bike

Running illegal modifications can either get you pulled over or get you additional citations once you are pulled over. That’s just dumb. Every state and municipality is going to vary a little bit in its unique vehicle laws, so we can’t provide you a comprehensive guide to what you need in your area but here’s a handy tip — a stock bike is going to be legal. If you plan on modifying yours, don’t change stuff like the exhaust or location of the indicators or number plates.

Because some people can be jerks, license plates, registration stickers and similar can occasionally “go missing.” Bolt your plate on securely and consider using a Torx or other non-common type of fastener to deter theft. Before applying registration stickers, slice them like a pie from corner to corner. Should someone try to peal them off (this happened to a friend outside my house last week), they’ll have a hard time re-applying them all lined up right. Again, that deters theft.

Your Gear and Appearance

Again, what you’re wearing and what you look like can either cause you to be pulled over or exacerbate problems once you are. Make sure your helmet wears its “DOT” sticker prominently on the back. Peeling it off or covering it up with another sticker or custom paint job may result in fines or unwanted police attention.

In my experience, cops also respond well to safety gear. But that response changes with different types of gear. When I’m pulled over in my Aerostich Roadcrafter, I look like an upstanding member of the public and am treated as one. The last time I was pulled over in my race suit, the cops were looking for someone that had been reported crashing earlier in the day. I pointed out how clean my leathers and bike were, to which the sheriff told me, “Slow down,” complete with that stern look only a moustache can convey and a finger in my chest. That finger then pointed at my shagged knee sliders and bobbled tires. I’ve never been pulled while wearing a squid vest or helmet Mohawk or just a t-shirt, but I’d wager those outfits would provoke more severe reactions.

The general idea here is to not only adhere to the letter of the law, but, because we live in a police state, adhere to social norms as well. If you look as if you’re toeing the line and were just doing a bit of mundane speeding, the consequences of a cop interaction are going to be less than if you look like you’re in the business of transporting drugs across a state line or you are on your way to negotiate a venue for an illegal dog fight. As sad as it is to think about, your “disguise” is important on today’s roads.

What To Do When You’re First Pulled Over

Traffic stops are risky events for police officers. And, if you’re pulled over by a traffic cop, odds are they hate their job as much as we all hate them. Add to that the risk they face and that many sport motorcyclists run from the m requiring a chase. To top it off, many normal people simply perceive motorcyclists in a negative manner. So, when you’re pulled, remember that the cop is a)scared for his life b)has been shouted at all day and c) likely hates you due to your mode of transportation.

It’s your job to mitigate that as much as possible. As soon as Smokey lights you up, slow down and make sure all your moves are predictable and telegraphed. No shoulder to pull over on at that particular instance? Move to the slow lane, indicate right, wave to the cop, then proceed to the nearest exit or other safe area at 5 mph under the limit.

Once you’re off the road, pull as far away from traffic as possible (it’s incredibly dangerous sitting stationary next to a fast-moving road) and, if you have them, turn on your hazard lights. Kill your engine and turn the key off.

Next, is the most important part of your interaction. Now that you’re sitting on the side of the road with a patrol car behind you, the cop is expecting you to run. He’s looking for any sign that you may be about to. You need to defuse the situation by demonstrating to him that this is not about to happen. Some riders remove the key and drop it on the ground next to the bike. If you do that, make sure the cop sees you do it. I just remove my helmet and place it on the tank in front of me, then place my hands on top of it and sit still.

Do not begin fishing for your license or documents. It is important that the cop understands you are not a threat and are not going to pull out a weapon. It’s also a good idea to stay seated on the bike. Standing up or dismounting can appear threatening.

How To Interact With The Cop

Put away your moral outrage and stick it to the man attitude. The cop is just a guy doing his job. Even if that job sucks. Smile and be polite. Ask the cop how he’s doing. Compliment him on his tight pants, big gun or fast car. Do not allow the interaction to become a conflict.

If your cop is like any that I’ve encountered, he’ll start with the clichéd, “Do you know why I pulled you over, sir?” At this point, you need to decide how you’re going to play this. All the advice I’ve read is to deny all knowledge of any wrong doing, but it just seems like doing so when you’ve blatantly been speeding or breaking some other law is just going to tick off Johnny Law.

Instead, I just admit to whatever it was, if I was doing anything. Awhile ago that was, “Well, I’m going to guess it’s because my bike doesn’t have a license plate, Sir.” Oh yeah, make sure you call them sir or ma’am and defer to them as you would any authority figure.

Admitting to whatever it is you were doing wrong quickly defuses the situation and puts the ball back in the cops’ court. If you have a valid excuse, use it, but don’t make stuff up. If your wife really is in labor, then the cop’s probably going to be pretty cool. If you’re just making that up, he’s going to throw the book at you.

From that point, just listen to the lecture, let them run your paperwork to make sure you’re not a criminal (you don’t have outstanding warrants, right?) and just be agreeable with whatever the cop wants to do with you. There’s nothing else you can do at this point. If they’re going to tow your bike or write you a bunch of trumped up citations, you can’t stop it and arguing will only make it worse.

If you feel you have a legitimate grievance or aren’t guilty of the charges, go home, call your lawyer and deal with it then.

When the cop hands you your license back, smile, thank him for doing a difficult job and ride away in a calm, controlled, legal manner.

What To Do Next

When I first moved to America from London, I was handed a bunch of totally bogus tickets during a surprisingly violent, aggressive encounter with the NYPD. It shook me up badly and I was so ignorant of the American legal system that I simply cleared out my bank account and paid them. I shouldn’t have. It turns out that after the traffic stop, you get to be as nasty to the officer and legal system as you want to be.

It also turns out that the legal system is completely corrupt. Know those lawyers who specialize in traffic tickets? Hire one, they’re great at their job and doing so will end up saving you money, even factoring in their cost. Show up to traffic court yourself and you’re paying whichever fine(s) you came in for. Show up with a lawyer and, except in extreme cases, the judge will automatically reduce your penalty without even listening to a defense. Use a defense and a lawyer and your chances of leaving with no fines at all are pretty good. The entire system is biased in favor of citizens who can afford legal representation. And that representation can be surprisingly cheap to come by.

Regardless of how you handle the legal stuff, make sure you do handle it. If you have a court date, don’t miss it. If you have to pay fines, pay them on time. Just accept that you lost this round and do the adult thing and take care of it. The consequences for failing to do so are far more severe than your original penalty or penalties will be, so just accept them and move on. Maybe learn a lesson about illegal pipes or where it’s OK to speed in the process.

What happened the last time you got pulled over?